From shipping containers to personalized produce, a look at the cutting edge of urban ag.

Gone are the days of urban farming as a quirky hobby rather than a viable channel for food production.

With more reports sounding alarms about looming food scarcity issues, the urban agriculture sector is also increasingly melding with the boom in agriculture tech, breeding companies offering everything from unorthodox growing setups to soil sensors, hydroponics and all manner of crop data analytics.

“The problem is so huge and broken in so many places that there’s many billion-dollar markets you could just jump into,” Brad McNamara, co-founder of Boston container farming startup Freight Farms, told GreenBiz. “There are connections being formed and local food systems and food markets that people are hungry for.”

Just look at Urban Tilth, City Slicker Farms or the Green Bronx Machine, which all grow affordable, high-quality food on underused land — and manage to create job or help alleviate food deserts in the process.

Cities also are starting to play along, with officials in California cities such as Oakland, Sacramento and San Francisco actually moving to ease regulatory requirements or add incentives for urban farming.

Of course, there are lots of potential pitfalls in all of this.

Figuring out how to regulate urban farms — even putting into place checks for food safety and other basic processes — is one issue. In markets with high costs of living and intense competition for expensive land, such as San Francisco, it's also a tough judgement call to grow food on large lots instead of building housing for residents facing $3,500-a-month rents.

With one United Nations report even noting that one-fifth of the world's food is grown in urban areas — everywhere from informal backyard plots to high-tech vertical farms — one overarching concern is avoiding ills such as cost-cutting, dependence on toxic fertilizers and ecosystem degradation that have plagued the industrial food system.

Even fundamental issues such as the size of farms become more pronounced in urban environments.

“I’m not sure we’re talking about a city any more if we’re going to have fields of 20 acres and more,” Kaid Bainfield of the Natural Resources Defense Council said in an interview with Grist.

From new variations on greenhouses to farms designed to grow up instead of out, here's a look at the companies leading the urban ag charge:

McNamara and co-founder Jon Friedman aren't farmers by trade. Before the pair launched Freight Farms in 2010, they were working as green rooftop consultants to clients in urban areas, and found that pricing was always the sticking point. 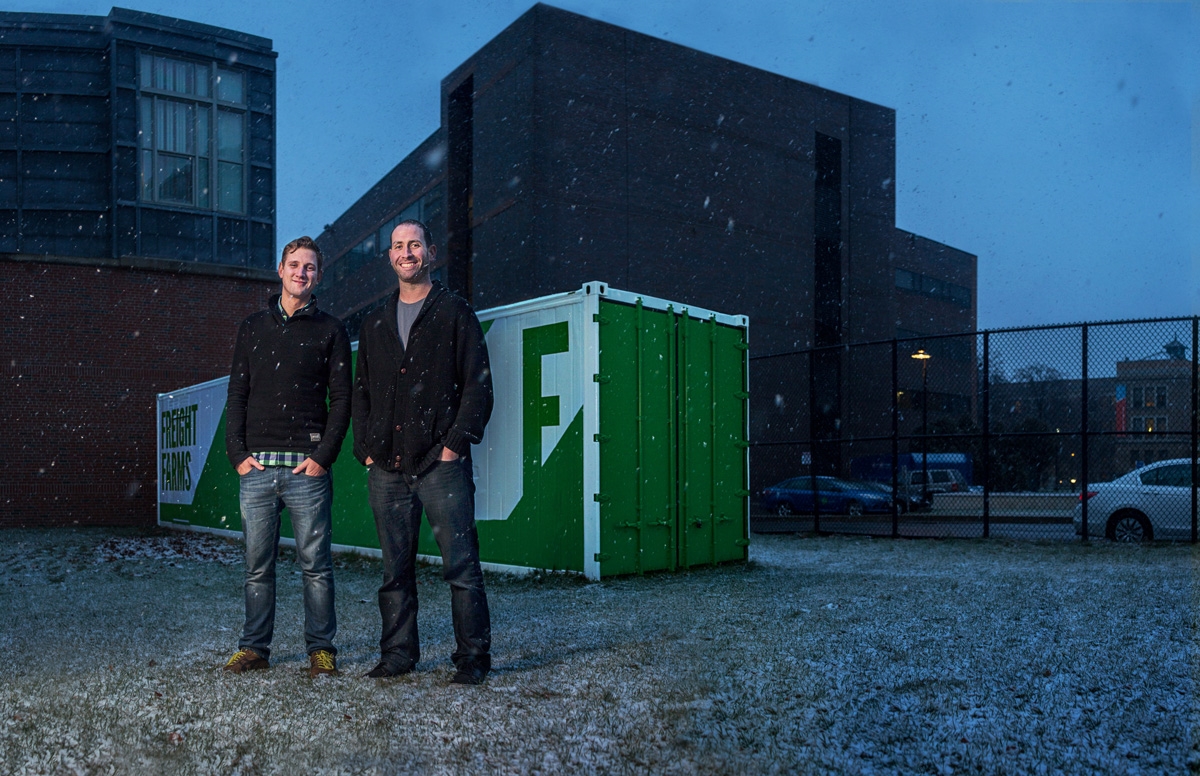 In an effort to drive down construction and operational costs, the group pivoted away from “in between spaces” that have become synonymous with urban farming, such as vacant lots and brownfields, instead focusing on growing food in replicable shipping containers — a shift that's help them raise some $5 million from venture capital investors to date.

The company's signature product, the “Leafy Green Machine,” is a ready-made hydroponic farm inside a 40-foot-by-8-foot-by-9.5-foot shipping container that uses LED lights and drip irrigation. The company also created an app, farmhand, that allows customers to remotely track conditions inside the container, such as temperatures that are crucial for food safety.

Proclaiming itself “the commercial leader in urban agriculture” is vertical farming company AeroFarms, which markets an approach to food production with LED lighting and aeroponics, negating the need for natural sunlight or soil.

The New Jersey-based company has raised more than $30 million in a bid to produce some 1.5 million pounds of produce annually, in large part by growing at a 69,000-square-foot converted steel mill in Newark.

Rather than framing food grown on farms as an equal replacement for field-grown crops, AeroFarms (like several of its competitors) emphasizes year-round availability and capabilities for growing finicky foods that carefully must be monitored.

In addition to better water efficiency and the appeal of pesticide-free produce, the company also plays up the trend toward local supply chains, stressing fewer transportation miles traveled and closer ties to communities.

In a bid to bridge the gap between farm and grocer, New York-based BrightFarms “finances, designs, builds and operates” greenhouses close to food retailers.

The effort to upend the produce supply chain has helped the company raise more than $11 million from investors.

The company's first few farms in Kansas City, Missouri, and northern Virginia certainly don't operate in the densest of cities, but BrightFarms is pushing the boundaries of sustainable agriculture. With its Bucks County, Pennsylvania, operation, the company inked a first-of-its kind, long-term “Produce Purchase Agreement” with independent grocer McCaffrey's.

Sure, shipping containers and greenhouses on the ground are options for would-be urban farmers, but Edenworks — the brainchild of a bioengineer and an architect — takes the field to new heights. 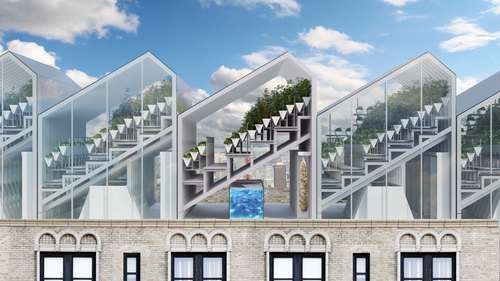 The Brooklyn-based company has raised just shy of $1 million to build rooftop aquaponic greenhouses that grow organic greens, mushrooms and herbs with the help of manure from tilapia and prawns also grown in the mini-farm.

“We’re seeing distributed power happening through solar and wind, and the next thing that really needs to become distributed is food production,” co-founder Jason Green told TechCrunch this month. “There’s a huge amount of energy that goes into the distribution of food, and things are grown for transportability, not for quality, or flavor or nutrition.”

Sensors within the greenhouse also collect data on environmental conditions and the wastewater from the sea creatures, providing information to growers about which operation components need attention.

At its core, Detroit Dirt is a compost company.

Founder Pashon Murray, a Detroit native whose parents both worked for General Motors, has enlisted support from the city's auto industry — in turn appearing in widely watched car commercials — to scale her model for generating compost, and then using the material to grow food on vacant lots.

Murray's company functions as the middle man between businesses that generate lots of waste (such as restaurants and the city's zoo), taking that waste and processing it at a 2.5-acre composting facility before selling it back to urban farmers in need of nutrient-rich soil. Detroit Dirt also works directly with corporations to launch community farms.

“People ask me if I’m building a landfill,” Murray told the blog The Fiiix last year. “I like to think of it as a winery. I have different grades of dirt for different uses.” 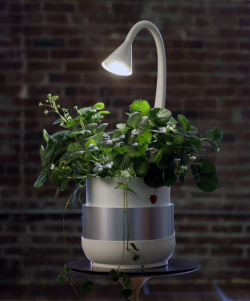 With the tagline of “personal produce,” Detroit-based SproutsIO is beta-testing small, in-home or in-office systems for customers to monitor and control plants from their smartphones.

The jist of the idea is to urbanize the suburban backyard garden.

According to a recent report by Wired, the company aims to provide both hydroponic and aeroponic systems, a data log to monitor the health of plants and when they will be ready to harvest, as well as a way to interact with other customers growing their own food.

One of the few large companies to wade head-first into its own ag tech venture is Japanese IT company Fujitsu, which has received notoriety for its endeavors growing lettuce in large-scale vertical structures.

Interestingly, the company sees itself more as a poster child for ag tech than a budding farm hardware purveyor.

“Growing lettuce is not meant to be a revenue stream, but rather a necessary step in convincing farmers to start utilizing Information Communication Technology,” according to a report by U.K. publication The Register. 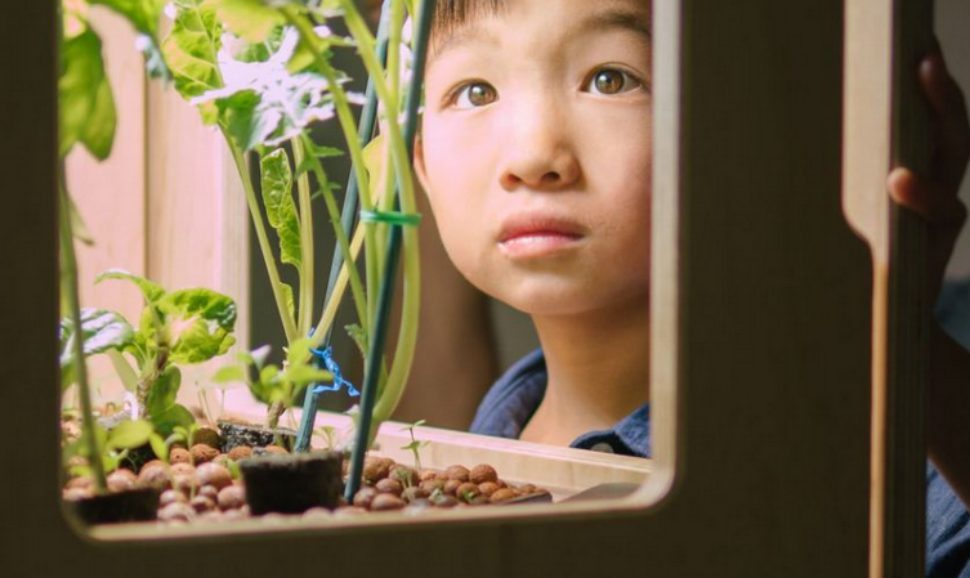 Boston-based Grove Labs is banking on its $4 million in funding to help sell lots of city-friendly indoor gardens.

While many urban ag startups favor aluminum racks and other more industrial touches, Grove has folded its indoor farming technology within furniture designed to blend in with apartment decor.

The company is accepting refundable $100 deposits for the first batch of products expected to ship this winter and sell for less than $5,000.

Just outside of Minneapolis, Minnesota, Garden Fresh Farms is focused on bringing farming operations indoors. The company founded by Hewlett-Packard veteran Dave Roser runs multiple warehouses that have been converted into farms.

In addition to developing a patent-pending cylindrical growing structure, the company advertises its capacity to advise those looking to establish their own indoor farms on everything from market research and real estate search to CAD design, installation of equipment, training and food distribution.

Also active in the portable farm space are the makers of the Growtainer: real estate developer and COO Alan Helene, and horticulture industry veteran and company president Glenn Behrman.

The two, who have offices in New York and Dallas, sell either 20- or 40-foot shipping container farms equipped with modular racks for growing food.

The operation is controlled by a “Growtroller” PC-based sensor system that monitors and regulates humidity, temperature, carbon dioxide and pH levels.