We've seen no shortage of packaging improvements by companies over the past decade, but these 10 packages and concepts represent some of the most innovative, far-reaching and promising efforts we've come across. In no particular order, here they are:

Method's squirt bottle for its 8x concentrated laundry detergent is a case of packaging and product going hand-in-hand. Because the detergent is much more concentrated than the typical 2x concentrated detergents, less is needed. To make sure that people don't overdo it when adding detergent to their laundry, Method decided to use a bottle that only lets out a certain amount of liquid with each pump. 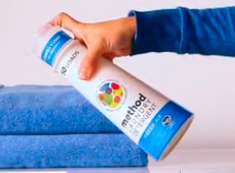 Having a control like that in place helps people use exactly how much detergent they need to, cutting down on the overdosing that can happen from using the typical small caps with hard-to-read fill lines. As a bonus, the packaging is completely recyclable, made of commonly-recycled HDPE (identified by the resin code #2) and takes up significantly less space than other detergents.
Since Method's technology for making its 8x detergent is patent-pending, we might not see similar widespread use of such packaging, but we can always hope.

Although Amazon.com's Frustration Free Packaging program isn't one type of packaging, it is an unprecedented initiative that offers two benefits: Packaging that's easier to open, and less packaging altogether.

The online retailer has worked with companies to help them reduce materials in packaging, cut out unnecessary plastic and bits like twist ties and swap out graphic-heavy boxes for plain cardboard boxes (the former of which is especially unnecessary for items being sold through a virtual storefront). 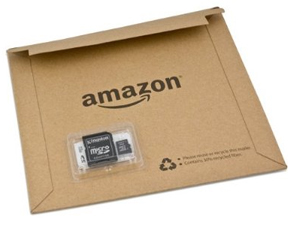 Frustration-Free Packaging was launched in time for the holiday shopping season in 2008 with 19 products, and Amazon.com now lists well over 300 products as coming in Frustration-Free Packaging. While a lot of those are items that have traditionally not been lumped in the frustrating category (Has it ever been that difficult to ship tea and tissues with minimal packaging?), Amazon has made worthwhile strides in getting toy and electronics companies to wrap up products in simpler packaging.

Amazon even added a packaging feedback form on its site to gather information from customers on the most excessively packed items and launched its own line of electronics and blank media called AmazonBasics, selling them only in Frustration-Free Packaging. 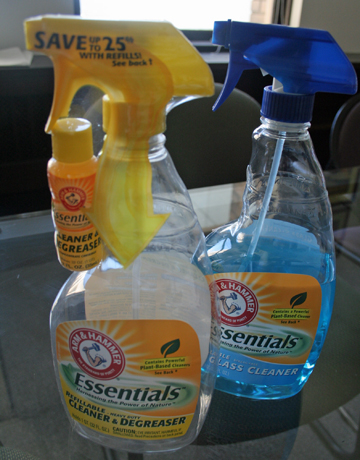 While Arm & Hammer's Essentials refillable spray bottles with concentrated cleaning liquid are a standout innovation, the company unfortunately no longer offers these cleaners. It appears the products were phased out after only being available for a year, which is a shame since the packaging had such great potential for reducing impacts across the supply chain.

Each spray bottle was sold empty, with a small bottle of concentrated cleaner. To fill up the bottle, customers would need to add water, insert the small bottle, twist it so a special bit slits it open, and voila, you have homemade cleaners.


Each spray bottle could be used at least seven times. This innovation alone would lead to massive impacts, and exponentially so if it caught on at other brands. From substantially lighter shipments to huge savings in plastic used and thrown away, simply encouraging a reuse mindset among consumers would be enough to land this innovation on our list.

As a small consolation, we've come across at least one company, Ecodiscoveries, which sells a wide range of cleaners in similar refill packaging at specialty and health food stores. 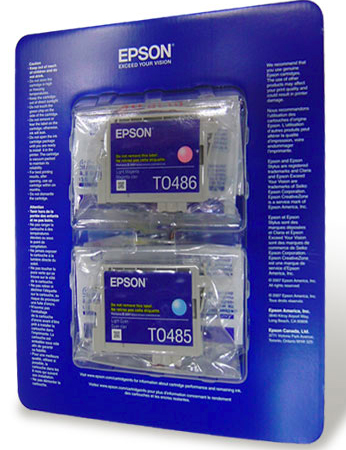 The basic premise is that the instead of a big plastic shell around a product, there is instead a smaller plastic case that fits snugly around the product, and paperboard is used to hold the plastic shell closed and secure.

More importantly that the packaging being developed, it's being used throughout Costco andSam's Club, and by companies like Swiss Army, Apple, Microsoft, Kodak, Neutrogena and many more. 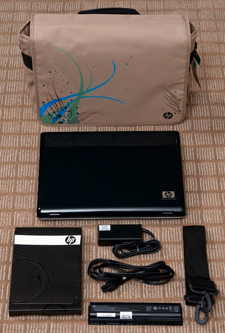 Back in late 2008, Hewlett-Packard released a laptop that boasted having 97 percent less packaging than typical laptops. HP did it by packing the laptop and accessories in a messenger bag, and shipping multiple bags in large boxes to stores.

The laptop-in-a-bag was sold only through Walmart and Sam's Club, and while it was a one-off design, it was truly - pardon the horrible pun - out of the box thinking.

When someone is buying a laptop, they're likely going to want a way to carry it around. This combo provided a two-in-one solution for people who needed to get both at the same time.

In addition to the large reduction in materials, the laptop bags were made with 100 percent recycled fabric and took up less shipping spaced than laptops in typical boxes.

The case of removing bisphenol A (BPA) from cans is different from all of those in that it's a packaging effort being done for human health reasons. The Food & Drug Administration, Environmental Protection Agency, President's Cancer Panel and National Toxicology Program have all raised concerns over BPA's possible health effects on humans, which include reproductive problems, developmental issues, diabetes and cancer.

BPA is found in numerous items, including the epoxy resins that line metal food cans. General Mills' Muir Glen organic tomatosubsidiary  announced it will be switching to BPA-free cans, following on the BPA-removal efforts of Eden Foods, which took BPA out of its bean products, and a number of seafood companies.

But many roadblocks remain. Tests have found BPA present in food from companies that switched to BPA-free resins, prompting concerns that contamination is coming from elsewhere in their production chains. Companies have been reluctant to talk about their efforts to find alternatives, and in the case of Heinz, won't identify which products are in BPA-free cans. And one BPA-free resin won't necessarily work for all food types, requiring extensive research on alternatives.

The upcoming switch, and General Mills' announcement of it in a sustainability report, bodes well for BPA-removal efforts, showing that an alternative for tomato cans does exists and is being embraced by a major company.

In most cases of using recycled content, companies need to work with their packaging supplier to find the right mix of recycled plastic and develop packaging that performs the same as their previous packaging. 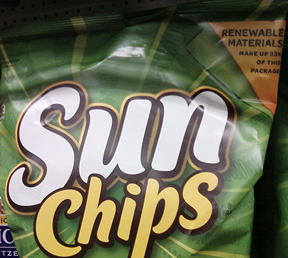 Although bioplastics are still in their infancy due to the lack of widespread composting services, packaging made from plants and crop waste has sprouted up in a few companies.

SunChips has received the most attention both due its extensive promotion of its corn-based chip bag that is fully compostable in home and industrial compost settings. Snyder's of Hanover switched its organic line of pretzels to bags made with corn-based polylactic acid (the same material used by SunChips), but does not tout its bags as being biodegradable.

Yerba mate maker Guayaki has also moved to compostable plant-based packaging, but opted instead for bags made with wood pulp.

The world of compostable packaging still needs a lot of work - such as making composting services more available and creating a dedicated identification code for compostable plastics - but hopefully as more companies embrace it, that will drive further changes.

One challenge that will need to be addressed is packaging that combines petroleum-based plastic with plant-based plastic, like Coca-Cola's PlantBottle, which contains 30 percent sugar cane and molasses-based plastic. While the bottles are recyclable, adding too much bioplastic into plastic recycling streams could contaminate recyclables and frustrate recycling efforts. 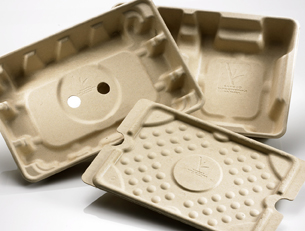 Most recently, Dell started using bamboo-based cushioning with select laptops, picking a material that has both better start-of-life (made from renewable bamboo instead of petroleum) and end-of-life (compostable instead of tossed in landfills) solution. The cushioning can compost in home and industrial compost settings, while recycling services that take foam are very rare, and the recycling of a super light material like foam brings in concerns about the amount of fuel used to transport it around.

Another foam alternative comes from Synbra Technology, whose BioFoam product is biodegradable, made from sugar cane and carries Cradle-to-Cradle certification.

ExpandOS takes a different route with specially designed paper triangles that cinch into one another to form around and protect items being shipped.

10. Getting Rid of What's Not Needed

Lastly, we have one of the least glamorous packaging efforts: Getting rid of bits of packaging altogether. It's a simple concept: Look at the packaging you have, and figure out if there is a material, or a certain part, that you can do without. While there have been numerous cases of companies realizing what they can do without, here are a few examples:

Bayer HealthCare decided that it could do without boxes for some of its bottles of Bayer and Aleve, opting to print all necessary information on a fold-out slip of paper attached to the bottles.

There have been plenty of other packaging changes and innovations in the last decade, so what are the greenest packages that you've seen? On the other hand, what types of packaging are most in need of a green overhaul? Let us know in the comments below.