Crowdfunding is empowering innovators like never before by changing the way we finance projects and services. It democratizes entrepreneurship by helping to cut through the oligarchical institutions that may bottleneck innovation. Rather than rely on deep-walletted investors, entrepreneurs can, through platforms such as Indiegogo and Kickstarter, go straight to their potential customers to secure both funds and validation for an idea.

In lieu of equity, funders can receive “shout out” tweets, company swag or even early access to innovative products, depending on their level of contribution. Although Kickstarter projects are only funded if their pre-established funding goals are achieved, Indiegogo allows for flexible funding in the event funding falls short.

So far, crowdfunding has brought us everything from Oculus Rift to Cards Against Humanity. While many of these successful projects may be more recreational than revolutionary, crowdfunding also holds promise to bring about some remarkable sustainable innovations.

Here are some of the most stand-out crowdfunded sustainable ideas from 2014: 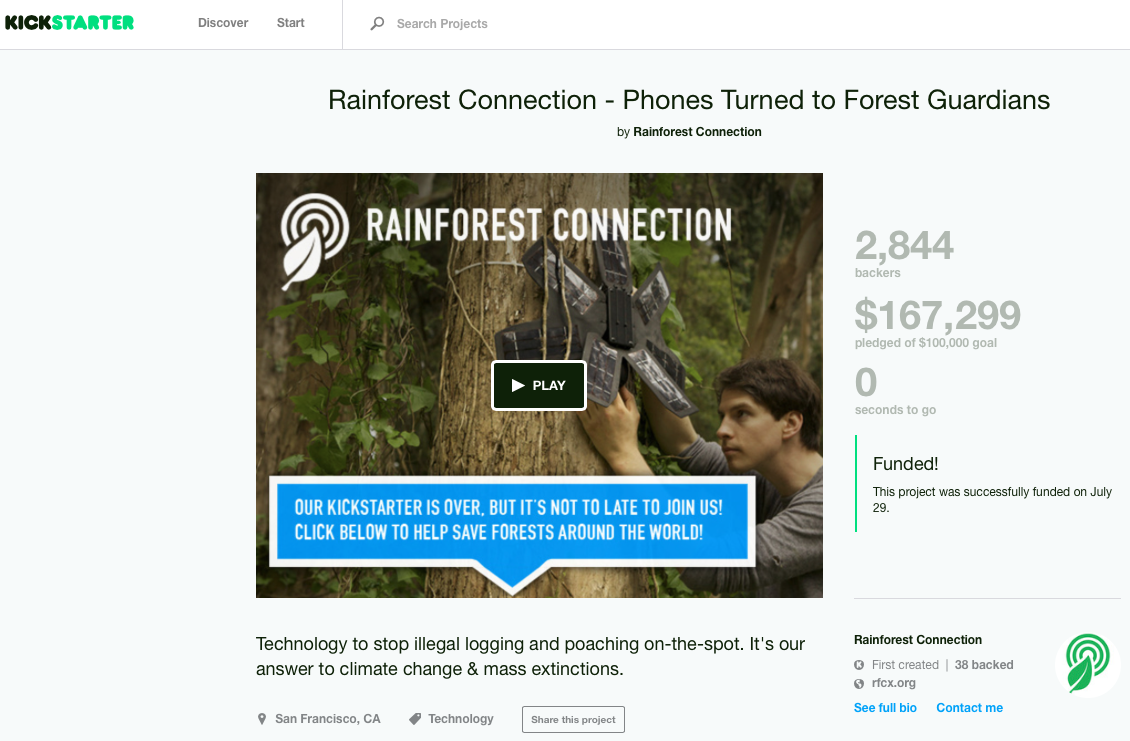 Rainforest Connection transforms recycled smartphones into autonomous, solar-powered listening devices that can pinpoint signs of deforestation at great distance. While current detection systems rely on satellites which show rainforest destruction days or weeks too late, Rainforest Connection provides a scalable, real-time logging detection system, pinpointing deforestation activity as it occurs. The app simultaneously streams the data openly and immediately to anyone. The company successfully funded its project on July 29 via Kickstarter, raising $167,299 over its $100,000 goal through 2,844 backers.

2. Roadways powered by the sun 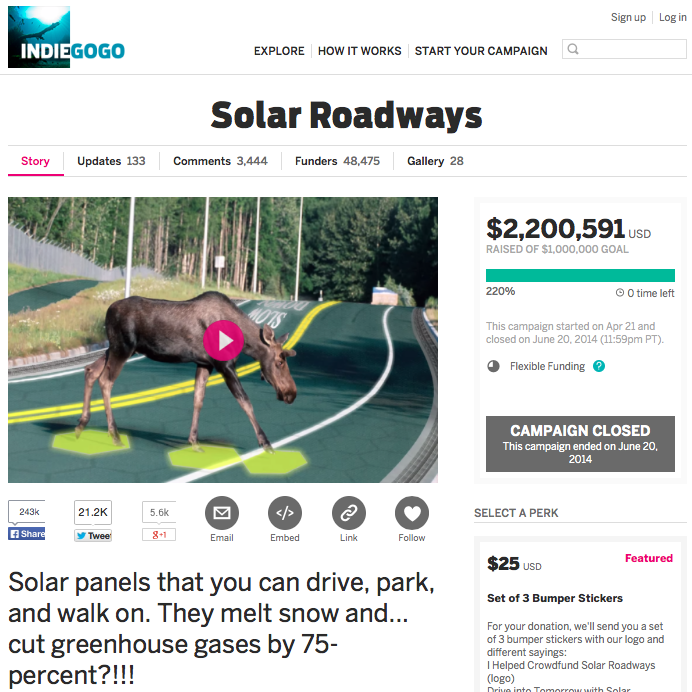 Solar Roadways provides a modular paving system of solar panels that can be installed on roads, parking lots, driveways, sidewalks, bike paths and playgrounds. They pay for themselves primarily through the generation of electricity, which can power homes and businesses connected via driveways and parking lots. The company claims a nationwide system could produce more renewable energy than the U.S. uses as a whole. The roads also include heating elements to stay snow and ice free, LEDs to make road lines, and signage and attached Cable Corridor to store and treat stormwater and provide a "home" for power and data cables. EVs will be able to charge with energy from the sun from parking lots and driveways, and after a roadway system is in place mutual induction technology will allow for charging while driving. Sounds cool? The crowd thought so. Solar Roadways raised more than double its ambitious $1 million goal ($2,200,591) through nearly 50,000 funders on Indiegogo.

3. Turn every light into a smart light 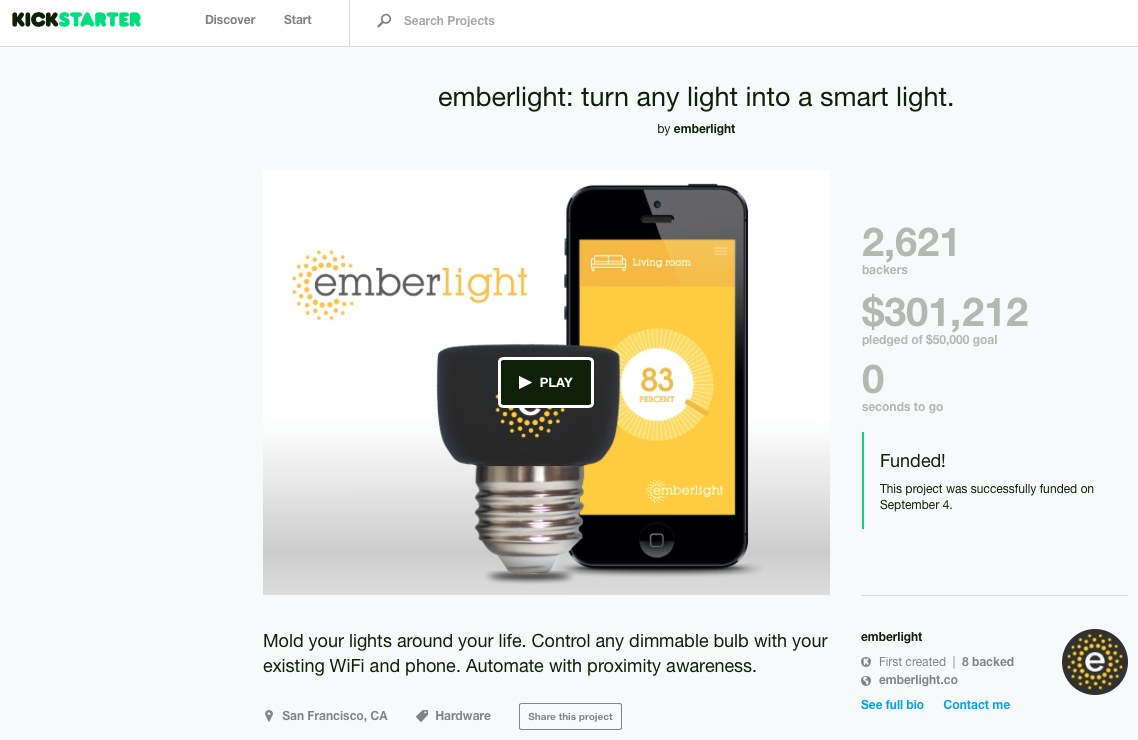 Emberlight allows you control a single or multiple lights at once right from your smartphone. You can dim lights manually or automatically, as well as automate lights in a room or entire house. The app tells you what light is on or off anywhere in your house, and can inform you how your lights are being used. Leave for your two-week vacation and forgot to turn off the lights? Fret not: the app allows you to shut them off from anywhere in the world. One of Emberlight’s best sustainability benefits is educating users on how they can reduce their energy consumption. In September Emberlight raised more than $300,000 over its $50,000 goal on Kickstarter. The BioLite BaseCamp converts heat from the fire into usable electricity via a thermoelectric generator housed within the orange power pack. This powers a fan that blows air back into the burn chamber for improved combustion. The surplus electricity is then sent to a USB port, allowing you to charge your devices. Although this sounds potentially dirty, it burns only fallen branches or small pieces of firewood. At the very least, it’s a more sustainable alternative to fossil-fueled stoves. Although the company only initially hoped to raise $45,000 on Kickstarter, it managed to raise more than $1 million through nearly 4,000 backers. 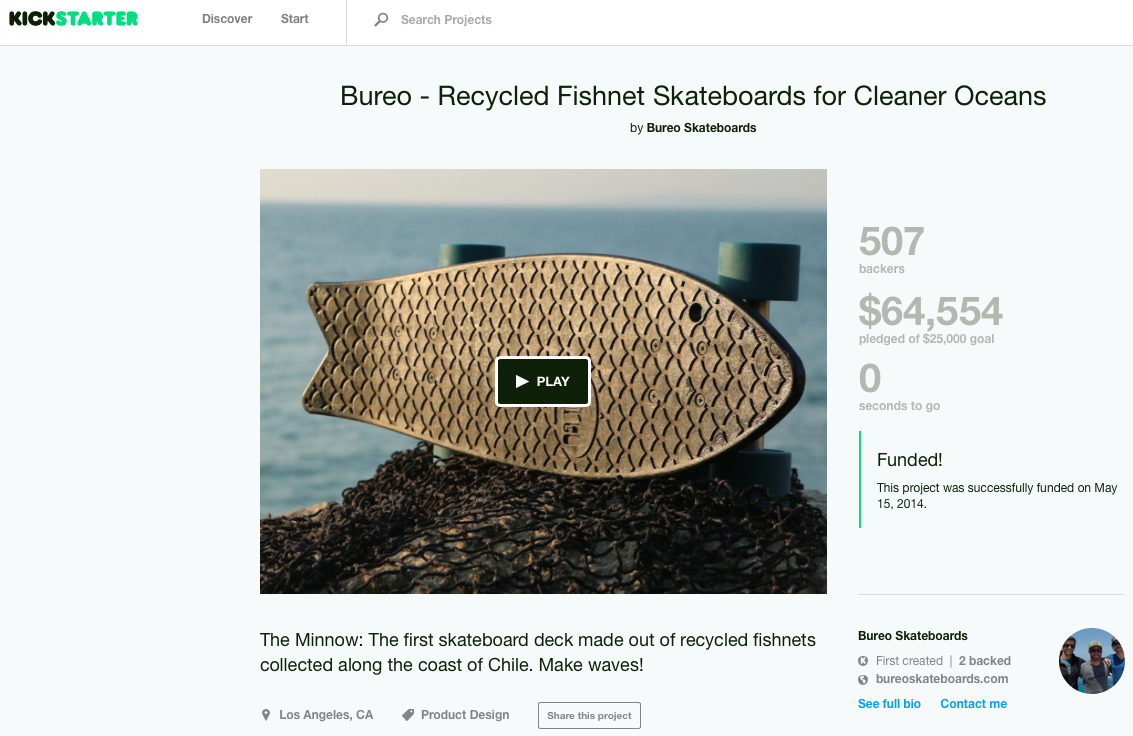 A company called Bureo Skateboards has developed a skateboard made from the tons of plastic waste littering Chile’s beaches and waters. Called the Minnow, it is shaped like a fish with a custom split tail and a scale pattern on the deck, made from roughly 30 square feet of harvested fishing nets. Using these fishing nets results in a more than 70 percent reduction in greenhouse gases compared to the use of traditional plastic. To bring the Minnow to life, the company raised nearly $65,000 on Kickstarter through more than 500 backers. 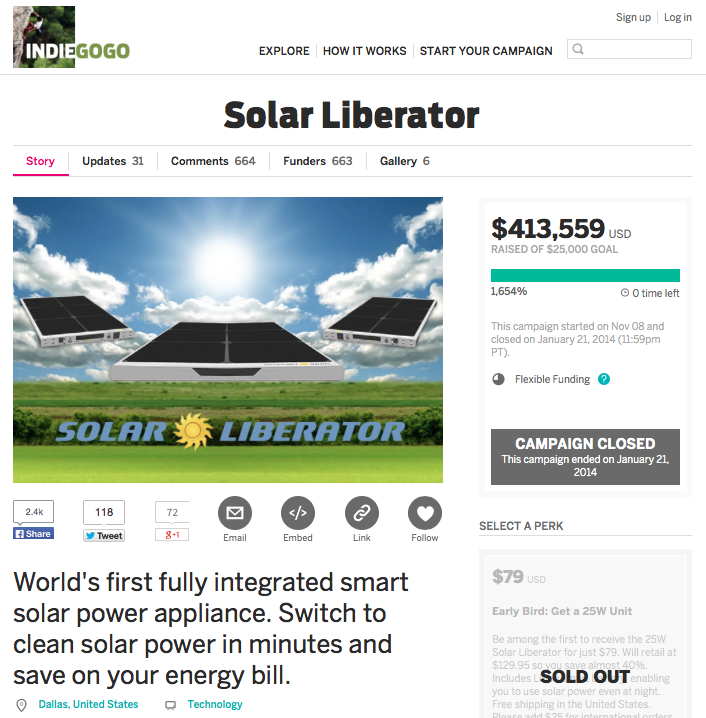 Solar Liberator reduces the complexity and cost of solar power with an out-of-the-box solution. With an inverter, smart battery and control electronics packaged into an easy to use appliance, it requires no further setup. The product comes in 500W, 100W and 25W variants. The grid-tie capable 500W unit can be easily chained into arrays of any capacity, which is ideal for powering homes, offices or workshops. The 25W and 100W units are designed for extra portability and versatility of use, which you can use in cars, strapped on to a backpack or bike, mounted on your camping tent or as an emergency source of power. Solar Liberator raised more than $400,000 on Indiegogo, smashing its goal of $25,000 through 663 funders. 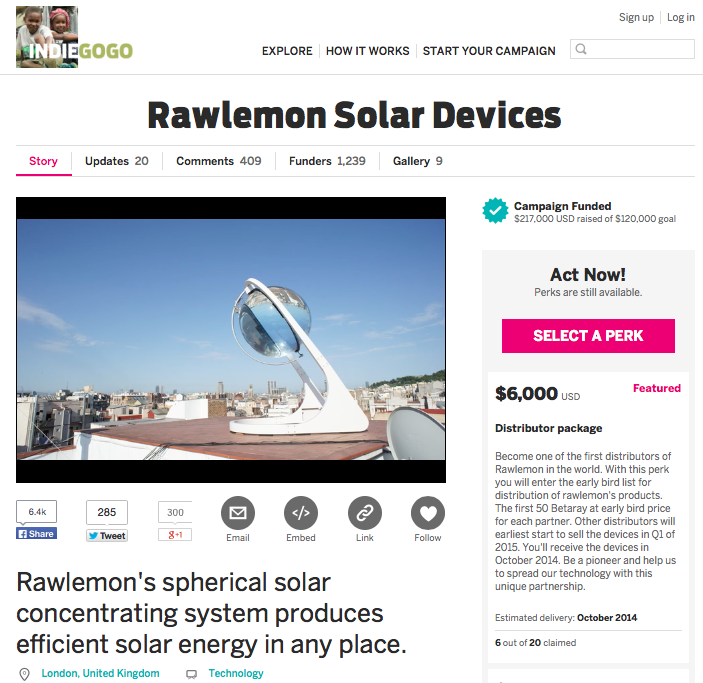 Rawlemon’s spherical solar concentrating system produces efficient solar energy in any location by concentrating diffuse light. After learning from a long research and creative process, early studies, concepts and sketches and 3D models, calculations and prototypes, the company found that a ball-shaped lens has excellent energy transmission, and also the capability to concentrate diffuse light. This year, Rawlemon raised $217,000 over its $120,000 goal on Indiegogo through more than 1,200 funders.

8. Harnessing the sun on your shoulder 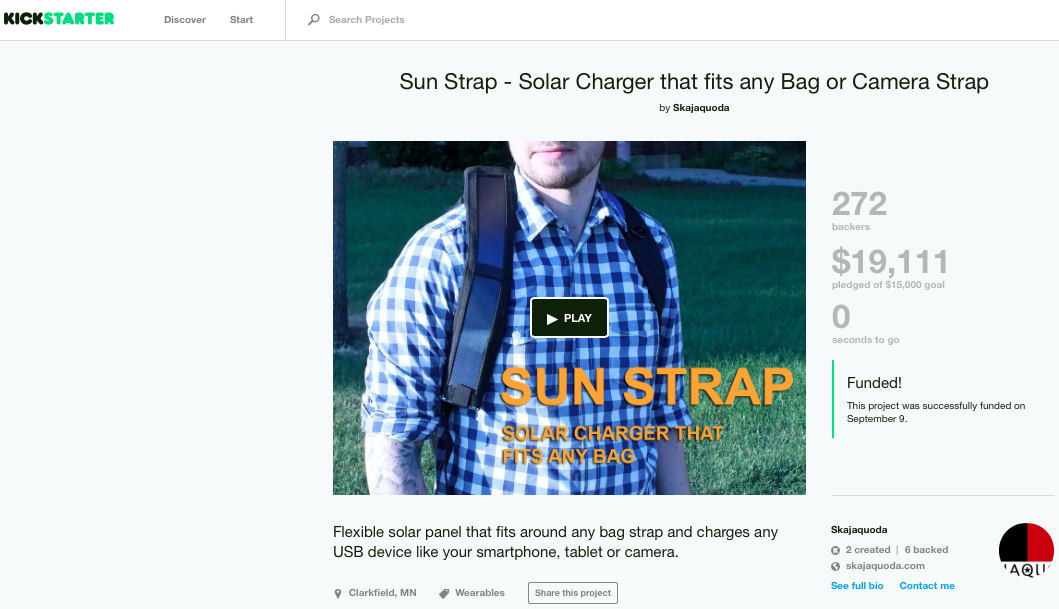 Minnesota-based research group Skajaquoda developed a flexible solar panel that goes around any bag strap and charges its internal battery as you go about your day. The device, called Sun Strap, uses a 1.5W flexible solar panel and has a 5600 mAh built in battery that can charge any USB device such as a smartphone, tablet or camera. When fully charged, Sun Strap's battery is capable of charging an iPhone 5 three and a half times. Sun Strap garnered $19,111 over a goal of $15,000 on Kickstarter through 272 backers.

9. A solar-powered fridge you can take anywhere 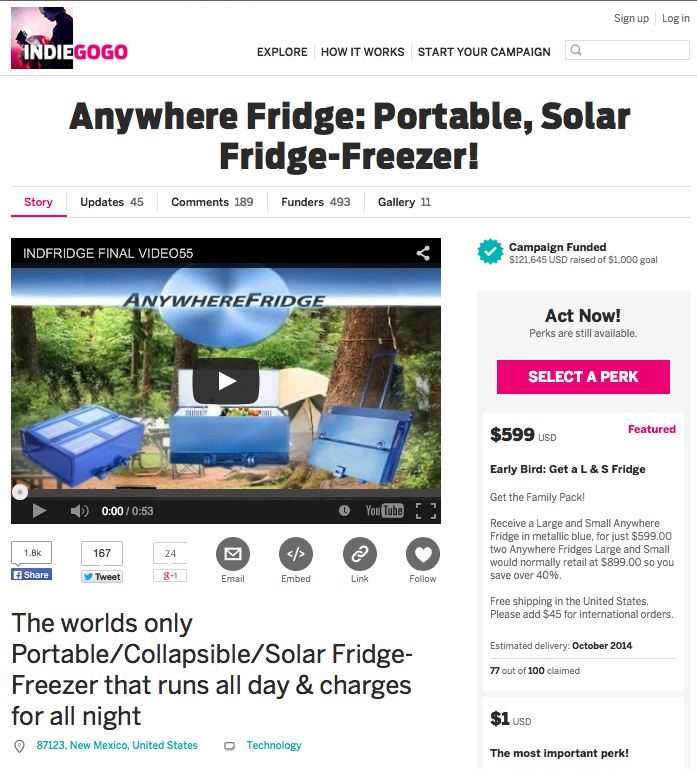 The Anywhere Fridge is a portable solar-powered refrigerator that can keep your food or beverages cold all day, and even through the night. For those times of low sunlight, you can also charge it by a standard outlet or by a car cigarette lighter. The product raised more than $120,000 on Indiegogo with a goal of just $1,000 with nearly 500 backers. Tailgating will never be the same again.

10. A bike that seriously folds up and fits into your backpack 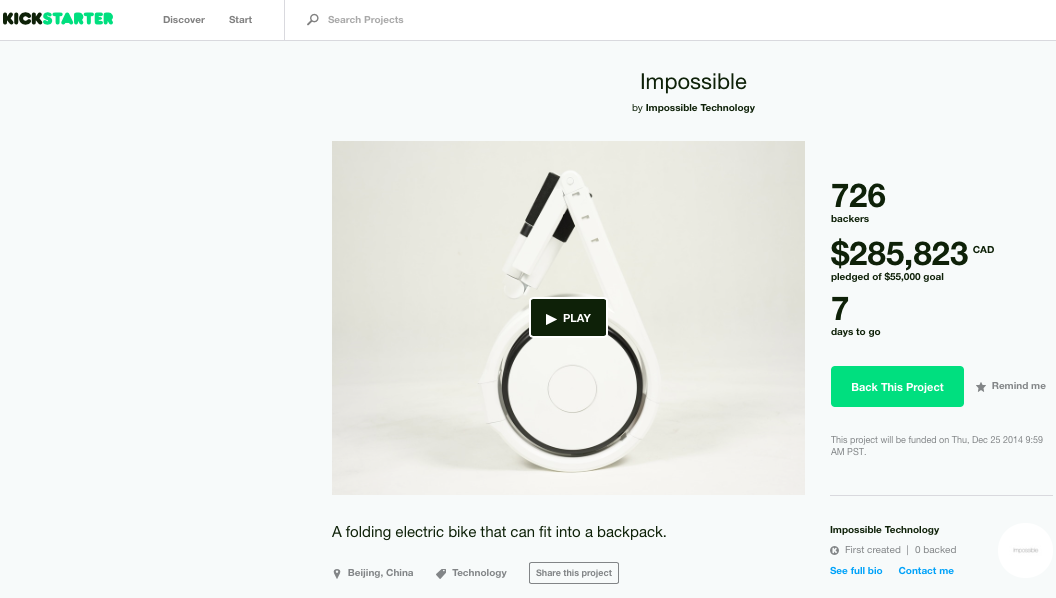 A company called Impossible Technology has lived up to its name by developing a bike that can not only fold up, but also fit into your backpack. The circular design of the bike frame helps to ensure that the bike spreads the weight equally across the frame. The seat and the handlebars are placed at similar heights so that the front and rear wheels bear the weight of the rider equally. The bike frame is also made of a carbon fiber, which makes it both extremely light and very durable. The “connecting box” in the middle of the frame is one of the handful of pieces made of heavier steel. This steel box can easily bear the weight of the rider and withstand the shocks associated with everyday use. Impossible Technology raised $286,837 over its $55,000 goal on Kickstarter through more than 700 backers.

No funds for that project? It may be time to ask the crowd