This column is about the people of sustainable business. What makes them tick? What have they learned? What do they do for fun? Next up in this series is Aaron Stash, manager of environmental strategy and sustainability at United Airlines.

Bob Langert: What made you switch from your 16-year career and education in marketing? Sustainability is a long way from being a brand manager of the MileagePlus Program.

Aaron Stash: It started with building a LEED Platinum Certified Home for my family. We were looking to save money on our bills. We were also looking to increase our indoor air quality. Both my daughter and I have a lot of allergies. My allergist told me I was born on the wrong planet.

For two years, we designed and sourced all these green materials the best we could. I was really passionate about doing it, did a lot of research on the home and thought, "I wonder if I could do this for a living." I set up a coffee with a colleague from the Environmental Sustainability Team at United. She told me she was moving departments and that I should talk to her boss about the position. I did that and, lo and behold, I was hired two weeks later. I haven’t looked back since. It’s been fantastic.

Langert: What a dramatic change. Did any of this environmental passion come from your upbringing?

Stash: Yes. I grew up in Central Illinois, surrounded by cornfields. Around this town of 2,000 people, I could see all the time how people were taking care of the land. Plus, I grew up in the era of "Captain Planet" on television and it was just always something I did in my personal life, but really never made the leap professionally until I wised up.

Langert: I see that you sing in choirs, plays and glee clubs. What does this bring to your life?

Stash: I’ve been performing since I was 5. I’m the youngest child. I think it’s that "hey-look-at-me disease." (laughs) I think being in musicals and being in choirs and performing, it helps me remain optimistic.

Langert: How do musicals do that?

Stash: If you look at Lin-Manuel Miranda and "Hamilton," I mean, here’s a guy who’s on this incredible high, and anytime you see him interviewed, you just see how grateful and optimistic he personally is. There’s a meme that goes "I want to be looked at the way Lin-Manuel looks at everyone" — so much gratitude and compassion. When you have to break into song to express your emotions, it makes it much more personal and more powerful. There is a lot of hope in musical theater. It’s a sense of escapism for a lot of folks but it’s also a sense of hope. It gives everybody a chance to pick up their sword and take on the next dragon.

When you have to break into song to express your emotions, it makes it much more personal and more powerful. There is a lot of hope in musical theater.

Langert: What music are you listening to now?

Stash: I’m listening to the soundtrack of "Natasha, Pierre and the Great Comet of 1812." I had a chance to see the show on Broadway with Josh Groban and was blown away by this incredibly unique and personal piece of theater.

Langert: Do your musical interests influence your approach to the sustainability work you do at United? Does it a counter to the doom and gloom that’s out there?

Stash: Exactly. If you read all the news every day about the environment, you’re like, "Oh, man, what are we going to do?" It’s those small steps every day that keeps us going, and that sense of optimism just keeps us going as well.

Langert: Do you think your performance background gives you more insight into how to relate and connect to the people you’re trying to influence to make change at United?

Stash: It’s really been helpful to have backgrounds in both performance and advertising/communications. Because in sustainability, I need to be that translator, right? So whether you’re working with engineers, lawyers or consumers, translating what the environmental scientists are saying in plain language has been really helpful.

Langert: Why are marketers so shy about leveraging sustainability?

Stash: I think one of the biggest points of advice I can give the sustainability folks is if you don’t know your marketing team, pick up the phone and start that conversation today. Be the Lorax for your company. Change the conversation and educate them about what you’re doing to make a difference. Authentic actions create authentic stories that they will want to talk about.

We’re working with biofuel producers to introduce more biofuel into operations so that all airlines could use and it really becomes the norm.

Langert: How did United earn the Eco-Friendly Airline of the Year Award from Air Transport World magazine?

Stash: Our best-kept secret is that United Airlines is one of the industry’s leaders in sustainable aviation biofuels. We launched ongoing operations using biofuels at Los Angeles International last March, and have been using that blended biofuel on all of our flights from LAX ever since. We’re the only U.S. airline using biofuels on a regular basis. 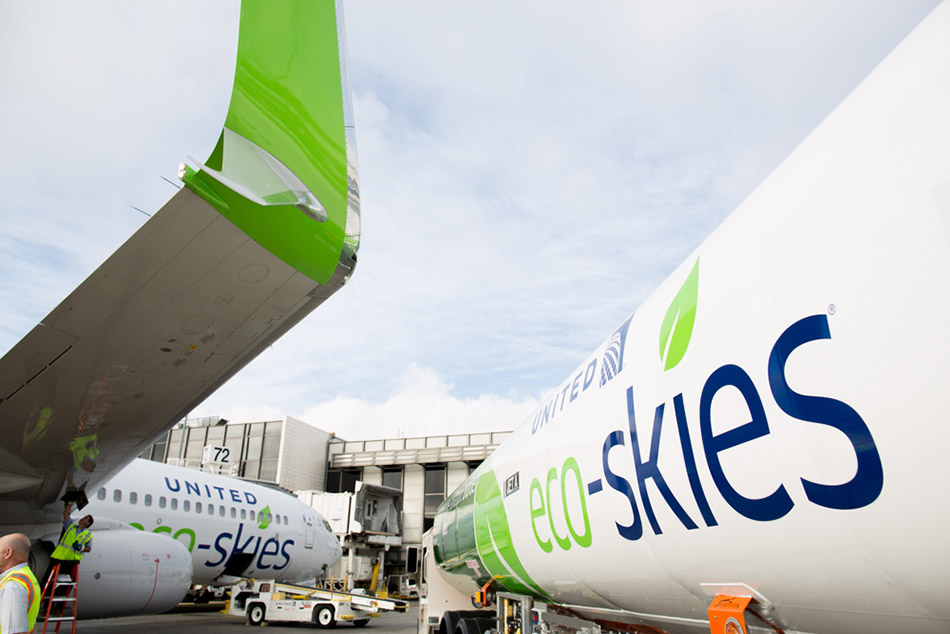 Stash: We’re using the largest amount of aviation biofuel ever. On top of that, United has over 60 percent of the [industry’s] commitments for future aviation biofuel development. So we’re working with biofuel producers to introduce more biofuel into operations so that all airlines could use and it really becomes the norm.

Langert: You recently tweeted that you participated in United Airlines Leadership Conference. Was there any sustainability element?

Stash: Yes, all the leaders within United got together for a two-day conference and they started out with this give-back opportunity where they were packing meals. It’s a really impactful way to get those leaders thinking about community support on a global scale. We actually packed up over nearly 300,000 meals to help fight hunger.

Langert: That’s impressive. Where does that commitment come from?

Stash: I really think it speaks to the new values that our CEO, Oscar Munoz, is working to instill within United since he began. It takes time to change a company culture, and recent events have accelerated that change and become a turning point.

Langert: What does the subhead on your Twitter handle mean: "rhymes with orange"? I admit I don’t get it.

Stash: That’s the story of my life. Orange is my favorite color. It has been ever since I was in second grade. Again, I think it’s that "hey-look-at-me disease" — nobody else likes this color so I’m just going to pick it as my favorite color. It’s bright. It’s hopeful. It’s optimistic. In my wry sense of humor, I put that out on Twitter because nothing rhymes with orange. It’s just another way to be unique and different.

Labels: Disdain them — except one

Heeding the lessons of 'sustainability vets'

An ode to the sustainability profession

See all by Bob Langert