Shared scooter networks are popping up in cities around the globe, eliciting strong reactions (both love and hate), drawing high ridership and offering new transportation options for a diverse group of riders. The leading startup, Lime, has grown at a jaw-dropping pace: it's operating in 150 markets, is worth billions of dollars, has hired 100 employees in just the past month and soon will be moving to its fourth office space in two years.

I sat down with Andrew Savage, a member of the Lime founding team, who just stepped into the role of head of sustainability and who's working on helping the bike- and scooter-sharing company deliver on its goal of using clean energy and becoming carbon-neutral. On the 21st floor of Lime's soon-to-be former office space in downtown San Francisco, Savage discussed working with cities and sharing data, Lime's new car-sharing service in Seattle (plus why it has no EVs yet), and the company's new version "3.0" of its scooter, which will launch eminently. Here's a lightly edited version of the conversation:

Andrew Savage: We’ve made a commitment to 100 percent renewable energy for charging our electric fleet. The sobering reality of the IPCC report is that we aren’t as a society or economy doing enough on climate pollution.

At Lime, we see a huge opportunity to change how cities function and really make an impact on climate change at a time when policymakers aren’t really able to keep up with or advance climate solutions fast enough. The exciting thing with the sustainability piece is it has also really resonated with both our riders and internally. It’s at the core of what we do.

Fehrenbacher: Does Lime have data showing that e-scooters or other products are actually helping with environmental problems in cities?

Savage:  Yeah, that’s where there’s a super exciting story that I think we need to continue to tell. Portland DOT [Department of Transportation] conducted a study that showed that 34 percent of scooter riders in that pilot, where we had 600 scooters, used a scooter instead of taking an Uber, Lyft, taxi or personal vehicle. I think that’s the most exciting statistic that’s out there around scooter sharing right now: how we are contributing to mode shift.

There’s also the story around why to view a scooter or a bike as being a critical part of the future of infrastructure in cities. Over time, if the data shows that having more scooters or bikes in a community leads to a greater [carbon and congestion reduction] impact, then that's a huge signal to regulators around what are the right amount of scooters or bikes or other micromobility options in a community. 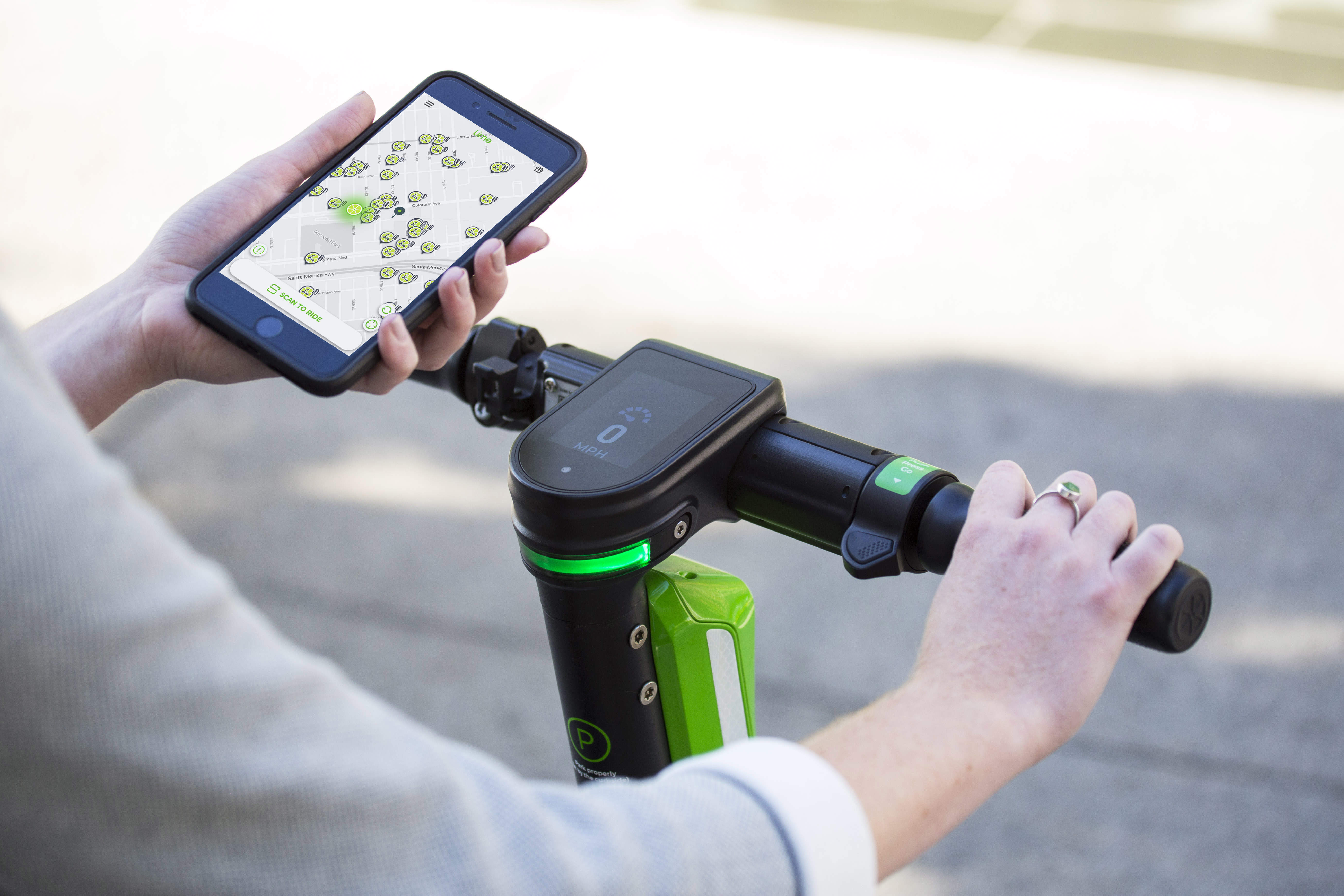 Fehrenbacher: Do you think the clean energy initiatives will help that relationship with regulators in cities?

Savage: Candidly it’s too soon to tell, but we think it should. We think having a 100 percent renewable transportation option for cities, many of which have adopted their own climate goals, will — over time — be extremely compelling.

We think that there are three areas where we can help cities face challenges with transportation. One is carbon: Over 350 cities have signed onto climate goals after we pulled out of the Paris Accord. Most cities are cash-strapped and will struggle to meet their carbon goals. We can come in with a program that costs them nothing, and we hope to take a big bite out of the carbon impacts they have in their cities.

Second is access: how do we provide our service to underserved communities, help reduce transit deserts and help with more affordable service in communities that either haven’t had the investment in public transit or other services to get to and home from work.

Having a scooter or a bike or a car immediately proximate to a potential user is one of the critical aspects of success for a program. So we are seeking regulations that help us get there.

The third is congestion. So we know with Uber and Lyft, congestion is going up and up. We think that a mode that is lower impact and that reduces the number of vehicles on the streets will be really compelling to cities.

Fehrenbacher: Lime launched the Seattle car-sharing network [last week]. How come you don’t have electric cars for that, and how hard would they be to deploy?

But we also want to be able to test the service and get it right and understand the operational challenges so we can go in and provide a service that works for the community.

Fehrenbacher: How important is data sharing for cities when it comes to navigating city relationships?

Savage: Since day one of the company, cities have had a thirst for this data to help with planning, to help with making routes safer and to help with integration with other services they are providing. And we view it as a really compelling part of the relationship and partnership we have with cities. We've worked with Los Angeles DOT, on the Mobility Data Specification (MDS) format to provide what we think is comprehensive and usable data so that they can help with those exact issues.

Fehrenbacher: How important is the hardware product [scooter] itself?

And we need a really good product or hardware — scooter, bike, car — to have a service that is safe, and people enjoy and that lasts. We’ve iterated on the product whether it's bikes or scooters, improving them, taking lessons from what we’ve learned, having multiple suppliers and really thinking about where to make improvements to have a product that really serves the community.

The new product, "3.0," has front suspension. It’s a much more robust product. And what’s really exciting from a regulatory perspective is that it has a digital display on the handlebars that will allow us to send messages to users around parking, around sidewalk riding, geofencing, noting speeds etc. So we can provide more information to riders around their own usage, which we believe regulators will appreciate as we think about the regulatory environment.

One of the real exciting things about this company is to work with our engineering team on regulatory solutions. So, for example, there are certain markets where we automatically slow down the scooter in higher congested areas or bike paths based on a geofence. That’s something regulators have asked us to do. It's something that with the technology we’re able to do, and I think iT allows us to be adaptive to regulatory needs in various communities.

Savage: I think the approaches of the two companies have been very different from the get-go. We’ve built very strong relationships with markets that we serve and built a very loyal following of city leaders that have experienced the service. As a result of that, we have over 100 markets that are exclusive.

In the earlier days it was such an unknown product that I think there were cases where the industry was out a little bit ahead of regulators at times. But I still think Lime’s approach has been to always proactively work with community members, whether that’s city councilors or DOT chiefs or mayors. In no cases have we gone into a market without working with one or multiple of those audiences, because that’s just so critical.

We’re so much a part of the fabric of the community once we’re there. By the nature of the product, we expect that we’ll have a level of regulation.

Fehrenbacher: What are the biggest challenges for the company?

Savage: I think from an internal perspective, it's growing as quickly as we are and maintaining the culture and values that have fueled this company’s success so far. From a regulatory perspective, it is working with cities that have said, "Yes, we want this electric service, but we want to cap it at a fairly arbitrary amount." It is incumbent upon us as a company and as an industry to make the case through data and partnerships for why we need to have uncapped markets or an expansion of those markets. Only through that will we have the full accessibility, congestion and carbon impact that I know we can have with our service.

Fehrenbacher: What policies does the industry need to create that environment?

Savage: We advocate for "dynamic caps," so with performance and success in the market, the regulation would allow us to increase our level of service, which then allows us to provide broader service and more available service. So we know having a scooter or a bike or a car immediately proximate to a potential user is one of the critical aspects of success for a program. So we are seeking regulations that help us get there.

I think the public transportation integration is an interesting one as well, like how can we support and buoy public transportation success in cities. So in Seattle, Seattle DOT published a survey that found that over 75 percent of our riders had used our service to get to or from public transportation. That’s an eye-opener for how micro-mobility can help mass mobility. That’s the winning solution: a 100 percent renewable micro fleet, combined with the ability to move people, and the mass numbers in public transit.

Fehrenbacher: I feel like scooters have become a strange target, particularly in San Francisco, for everything that’s wrong with the city, like gentrification, and people are overlooking the sustainability aspect. Does Lime have an opportunity to rewrite that negative messaging with sustainability?

Savage: We can absolutely do a better job in telling the pollution reduction story, and we need to. I think that’s something that over time, cities are going to want to tell and we need to tell for sure. San Francisco has certainly been an anomaly across all of the markets.

Shareable scooters may seem sustainable, but are they really?