10 reasons startups should be socially responsible from birth

Something doesn’t quite add up in the world of venture capital (VC). Most startups are founded by millennials, 76 percent of whom believe that businesses have the power to make a difference in the world. So, why aren't most startups socially responsible?

On the other hand, out of the $85 trillion of assets under management globally (roughly $1 trillion of which is in VC funds), $23 trillion incorporate non-financial information such as environmental, social and corporate governance (ESG) data in their investment criteria, and that figure is growing by 25 percent a year. So why do VCs remain somehow aloof from this trend?

If they applied rigorous ESG filters, VC asset managers would be better equipped to properly assess startups. To put it another way, they would replace their stethoscopes with MRI scanners.

The prevalent idea today is that looking at the ESG profile of startups would be a deviation from other important indicators, such as founders' profiles, financial models or market benchmarks. But with most startups dying while still in their infancy, we have to be even more thorough in the way we look at early stage companies in general. The following are some reasons why startup founders and VC fund managers should take corporate social responsibility seriously:

If ESG filters had been applied from conception, a significant number of sought-after startups would have been exposed earlier as risky investments.

They are able to pinpoint answers to pertinent and relevant questions facing businesses: Do the founders have a track record of evading taxes? Do the startup's products potentially violate human rights or environmental standards in a number of countries? Do they contribute to climate change?

Such risks, if not properly addressed, negatively can affect the total valuation of the company. According to a recent EY study, only 13 percent of investors would not change their minds, even if they knew a company they're buying into could cause resource scarcity (such as water). In layman's terms, sustainability is basically about identifying well-managed companies that have a long-term view. 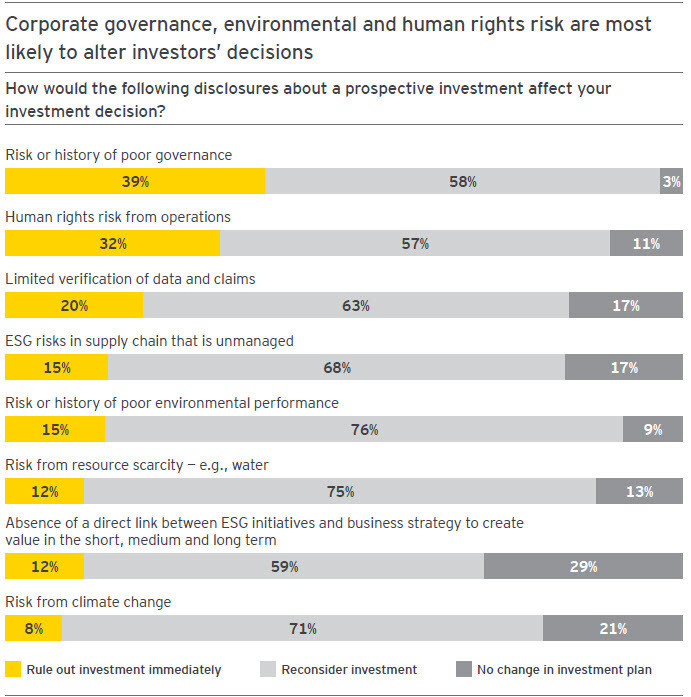 Another item of note is that socially responsible companies, operating across all fields, are shown to be more lucrative. A staggering number of studies have revealed clear statistics that show the correlation.

For example, an analysis of more than 300 pharmaceutical, consumer goods, oil and gas, banking and tech companies, conducted by the Boston Consulting Group, found that those with more ethical operations made bigger profits and tend to be valued more highly than their competitors.

Being socially responsible contributes to increases in a company’s sales, as conscious consumption trends indicate a growth tendency. To offer a global perspective, one report shows that 66 percent of consumers surveyed across 60 countries are willing to pay higher prices for goods when bought from environmentally conscious companies.

Another study claims that 87 percent of Americans would purchase a product from a company, if it advocated for a specific issue they cared about. If a startup sells products or services that negatively will affect the environment or society at large, its growth understandably would be hampered.

4. It helps when recruiting and retaining employees

A more meaningful startup has a greater ability to attract and retain employees. In fact, meaningfulness, defined as the feeling that one's job contributes to society as a whole, was identified as the third most important employee engagement driver by a study. These findings make sense, as they attest to the fact that employees who feel that their jobs serve a social purpose are prone to then exhibit greater levels of company loyalty.

Labor efficiency and labor productivity are derived from a whole gamut of factors, including team cohesion, motivation and corporate reputation. According to statistics, 42 percent of a company's reputation is based on consumer perceptions of the firm's corporate social responsibility efforts. 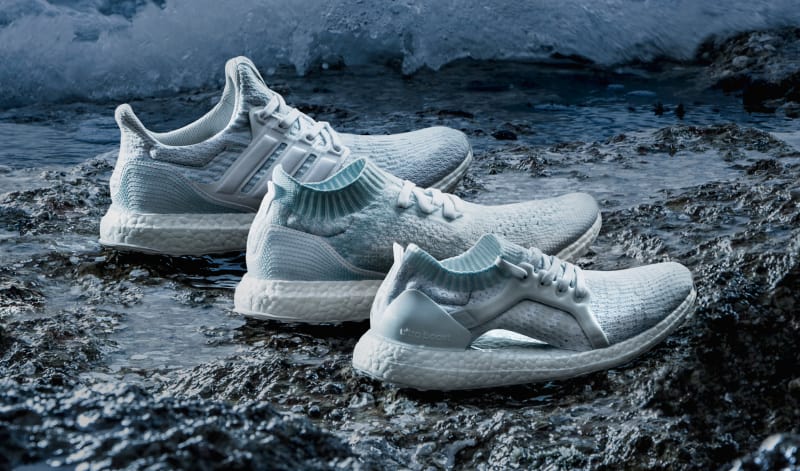 Corporate responsibility fosters innovation and differentiation and drives competitiveness. Need a real-world example? Just look at how market forces are pressuring Nike and Adidas to be innovative in designing sustainable materials and technologies. Whereas Adidas started a line of products using plastics taken from the ocean, Nike chose to invest in technologies such as ColorDry (water-free dyeing) in order to preserve the environment.

Venture capital funds and their limited partners (LPs) increasingly will demand that their assets be responsible. This trend already was revealing itself about a decade ago, as large institutional investors started to divest from "sin stocks." Examples of this were seen in the Norwegian sovereign wealth fund's withdrawal from a South African mining company, DRD Gold, and a South Korean arms company, Poongsan Corp.

As it becomes clearer that socially responsible assets perform better, asset managers and owners are proactively looking for more opportunities to expand in that space. As such, expect giants such as Andreessen Horowitz, Sequoia, 500 Startups and many others to start applying ESG filters — if for no other reason than to at least attend to pressures from their LPs.

Using production methods that cut waste and incentivize reuse results in lower production costs. This same principle is true for both a small retail startup rethinking plastic packaging and SpaceX reusable rockets. Being environmentally and financially conscious are two sides of the same coin.

9. It matters to corporate giants

In the past, only a handful of large corporations, such as Unilever, required part of their suppliers to integrate ESG practices. But now the list is much longer — think of Samsung, General Motors, Colgate-Palmolive and hundreds of large corporations ranked in the Dow Jones Sustainability Index. If a startup's business plan envisages supplying the corporate giants, its chances are directly correlated to its own corporate responsibility standards.

10. Do not postpone the inevitable

With investors, consumers, employers and suppliers pressuring companies to be socially responsible, it is both easier and cheaper to be born on the right path than to be forced to re-engineer strategies and business models in an effort to catch up with the market. Corporate social responsibility is not about size, it's about vision.

If ESG filters had been applied from conception, a significant number of sought-after startups would have been exposed early. A prime example is when the blood-testing startup Theranos went from a $9 billion valuation to ashes overnight, directly after it was discovered to be fraudulent, based on its use of unproven science and the fact that it had sent erroneous results to patients, resulting in a number of compromising health decisions.

VCs often analyze determination, flexibility, risk profile and track record — all that is essential. But what about their ethical profile?

As it takes into account the social impact of companies, ESG due diligence would have demanded quality and safety checks to be in place to avoid such a compromised situation. It was also the absence of ESGs that allowed DrKoop.com, the top healthcare website in the late 1990s, to seek endorsements with hospitals and other healthcare companies that were later deemed unethical — a move that proved lethal for the company.

Another example is HomeJoy, a cleaning services marketplace startup that was shut down due to the lawsuits it faced from cleaners who claimed that they were misclassified as independent contractors. This also could have been avoided using ESG investing principles, as both workers' retention and their legal situation are variables present in any ESG filter.

An ESG matrix takes the profiles of founders into consideration. For example, VCs often analyze determination, flexibility, risk profile and track record — all that is essential. But what about their ethical profile?

Remember Pay By Touch, the startup that allowed users to pay for items with a swipe of their fingers on a biometric sensor? The company was forced to close down when CEO John P. Rogers was accused of domestic abuse, drug possession and of taking company money for his personal use. An ESG due diligence would have turned on the siren sooner rather than later.

We also see startups regularly get hit by valuation-chopping scandals related to sexual harassment and gender and racial discrimination.

Another cautionary tale is Volkswagen's gross violations of environmental standards, which wiped 20 percent off the company's value, and as such, should serve as a warning sign for startups to be mindful of their environmental footprint. Such missteps can be death sentences.

The first simply pertains to excluding startups that operate in certain areas, such as gambling, tobacco, or military/ defense.

Positive screening is about looking comprehensively to a larger set of environmental, social and governance metrics, and then proactively selecting startups that have better records. This type of screening, which can be applied to all sectors, aims to reduce investment risks and increase returns.

Finally, impact investing involves narrowing down sectors and picking companies selling services and products that intentionally generate specific beneficial social or environmental effects that can be concretely measured. The first is already intuitively being done by most VC funds; the latter likely will remain a small (albeit an important) niche, but the greatest potential lies with positive screening.

To be socially responsible, startups need not add costs to their balance sheets. Nor do they need to go out and hire all new, socially environmental consultants. They don't need to bring in more lawyers to look at compliance issues. It's not an extra weight or new burden on the founders, but rather it is a dimension that will need to be incorporated right in the first presentations and brainstorms.

Hence, corporate responsibility is to be built in from the beginning, not added on as an afterthought or retroactively for a remedy. If a CEO is not socially aware and not ready to shape his or her company accordingly, then he or she will not be able to be a promising leader. 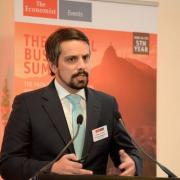 See all by Rodrigo Tavares