It's changing the face of real estate, and caters to rural America, business and industry. Here's how Allegheny Power Company unearthed hidden value.

Starting in the 1990s energy companies began unloading raw, undeveloped land they owned but no longer needed — a consequence of energy conservation efforts that reduced the need to build new power plants. Most companies either donated the unneeded land for preservation or recreation purposes — a seemingly smart public relations move — or sold the property at conventional land prices.

Consider Allegheny Power Company, the Pennsylvania-based electric utility. In 2002, an IRS-approved appraisal of developable eco-assets basically doubled the market value of its Canaan Valley property in West Virginia — from $17 million to $33 million. The company sold 12,000 acres to the non-profit Fish & Wildlife Foundation at the traditional land price ($17 million), then claimed a tax deduction on the "gift" represented by the incremental $16 million eco-asset value identified by an  appraiser.

In addition to earning $17 million from the sale, Allegheny offset its next-year tax liability by $5.1 million. The company realized a total value of $22 million on a property that had essentially no cost basis, having been purchased in the early 1900s.

These credits have protected over 75,000 acres of land that was previously underused, therefore undervalued, in terms of conservation markets.

What worked for industry then has also worked for farmers and ranchers in recent years. An eco-asset inventory of an underused 395-acre California horse ranch uncovered five rare species present on the property or living next door. This made the property highly desirable as a conservation bank — so much so that a nearby renewable energy company bought 290 of the 395 acres to help satisfy the company’s compensatory mitigation obligations.

The negotiated sale price took into account the market value for species mitigation credits. The owner sold 290 acres of this property for $4,400 per acre as opposed to $1,300 per acre — nearly 3.5 times higher than nearby properties — based on the value of mitigation credits that could have been developed and taken to market.

These case studies demonstrate that landowners can leave money on the table if they don’t consider the market power of ecological assets in measuring a property’s true worth. Of course, not every property will be able to earn two or three times market from an eco-asset valuation, but nearly every rural property is capable of generating some level of ecological value, especially if the environmental marketplace continues to operate, expand and diversify as it has done since the 1980s.

An expanding environmental marketplace fits in perfectly with a streamlined government that caters to rural constituencies across the U.S. Rural America can benefit greatly by discovering the heretofore hidden ecological asset value of underused, undervalued farm and ranchland properties. 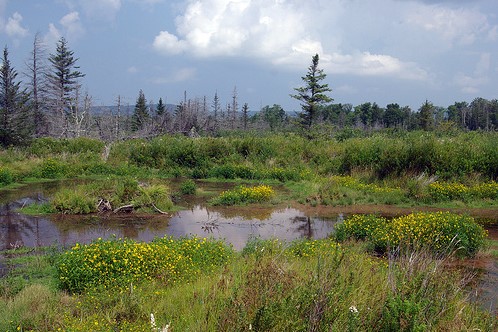 Ecological assets represent "units" of goods and services produced in nature; they are an aspect of natural capital.  Eco-assets such as compensatory mitigation credits are economic resources anchored in the land. They can be individually owned, developed and used just like more familiar mineral or water property rights. More specifically, mitigation credits can be characterized as extractable, nonrenewable surface rights.

These rights are attached to properties that qualify for such credits under a variety of existing government programs. They are authorized by agencies such as the U.S. Army Corps of Engineers, the U.S. Fish & Wildlife Service and the Environmental Protection Agency. Mitigation credits are considered nonrenewable because agency regulations mandate that mitigation credits can be used only once to offset or compensate for nearby development impacts. The credits then are reported as "withdrawn" and permanently retired from the landowner account authorized by a state or federal agency.

Mitigation credits represent a fourth unique type of property right, but in this case the "rights" are attached to agency-authorized permissions developed under regulations of the Clean Water Act and Endangered Species Act. 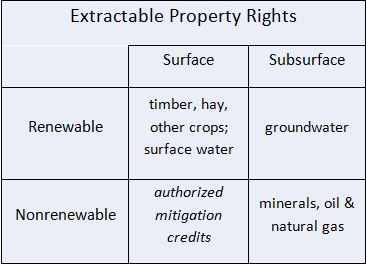 The credits trade hands between buyers and sellers for a mutually agreed upon market price, at which point they become bookable assets subject to the same accounting, auditing and taxation rules as other goods or services. They help measure the relative worth of certain ecosystem services, leading to lasting conservation of now-rare habitats whose market value contributes to regional economic productivity.

This means that rights to extract ecological natural capital, measured as mitigation credits, also exist as a benefit of land ownership. The value of these credits is realized as the assets (credits) are authorized, developed, inventoried and taken to market. At that point they are subject to the same market forces that shape price and liquidity for other commodities including principles of supply, demand and willingness to pay. 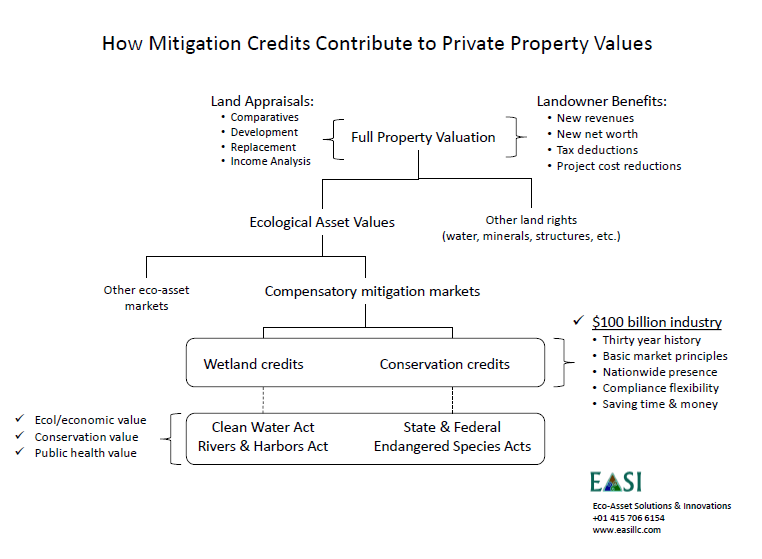 The variety of ecological assets has grown in tandem with volume from the late 1980s when the first mitigation credits were approved during the Ronald Reagan-George H.W. Bush years. Agencies have learned that measured improvements in air and water quality, waste and water management, and biodiversity protection can be realized by implementing reward-based, marketplace programs instead of relying only on penalty-based measures to meet the nation’s environmental quality goals.

These markets have led to quality-of-life improvements without policymakers needing to pass new laws. Incentive-based compliance programs (environmental markets) save money for business and industry, help meet resource management goals, and at the same time boost the value of real property to reflect embedded natural capital.

Mitigation credit markets are a little bit of John Hayek and a little bit of Maynard Keynes when looked at in the language of that long-standing economic debate. The credits are an expression of free markets at work inside a framework of agency guidelines designed to protect the public interest.

These markets have led to quality-of-life improvements without policymakers needing to pass new laws.

The foundation for these programs was laid during Bush’s administration when "no net loss" of wetland habitat became the mantra necessary to protect a rapidly disappearing natural resource. Every administration since has adopted the no-net-loss approach. It has been applied to other rare types of habitat — grasslands, woodlands, scrub-shrub lands — especially in Texas and other western states where the lure of markets and no net loss goals have converged with surprising fiscal appeal.

In Texas, mitigation credits are worth over $1.5 billion in commodity value, according to research by Eco-Asset Solutions & Innovations (EASI), a firm focused on natural capital markets values. These credits have protected over 75,000 acres of land (per Army Corps of Engineers data) that was previously underused, therefore undervalued, in terms of conservation markets. The Texas mitigation economy is so strong, in fact, that landowners have been seeking new ways to transform these previously hidden land values into revenues.

This is not a soft marketplace, as it turns out. A 2015 analysis by EASI valued authorized mitigation credits at more than $100 billion nationwide with something like $1 billion to $2 billion in transactions occurring each year. The assessment was based on a unique, in-depth study of mitigation credit price records EASI has gathered from every part of the U.S.

There is a growing belief that these assets have the ability to reshape our understanding of the fundamental value of real estate based on appraisal methods that build on the recently aggregated mitigation credit market data. The Allegheny Power case study, for example, drew on the expertise of Kauttu Valuation, an appraisal firm based in Saint Augustine, Florida.

More recently, Appraisal Institute (PDF) has been exploring these methods, including the Northern California chapter that sponsored a day-long seminar about environmental markets, ecological assets and mitigation credit valuation. The seminar presented a standard approach to assessing ecological assets that immediately can be useful not only in California, but in Texas, Wisconsin, Ohio, North Carolina, Florida and other states that have a long track record of market-based compensatory mitigation programs. 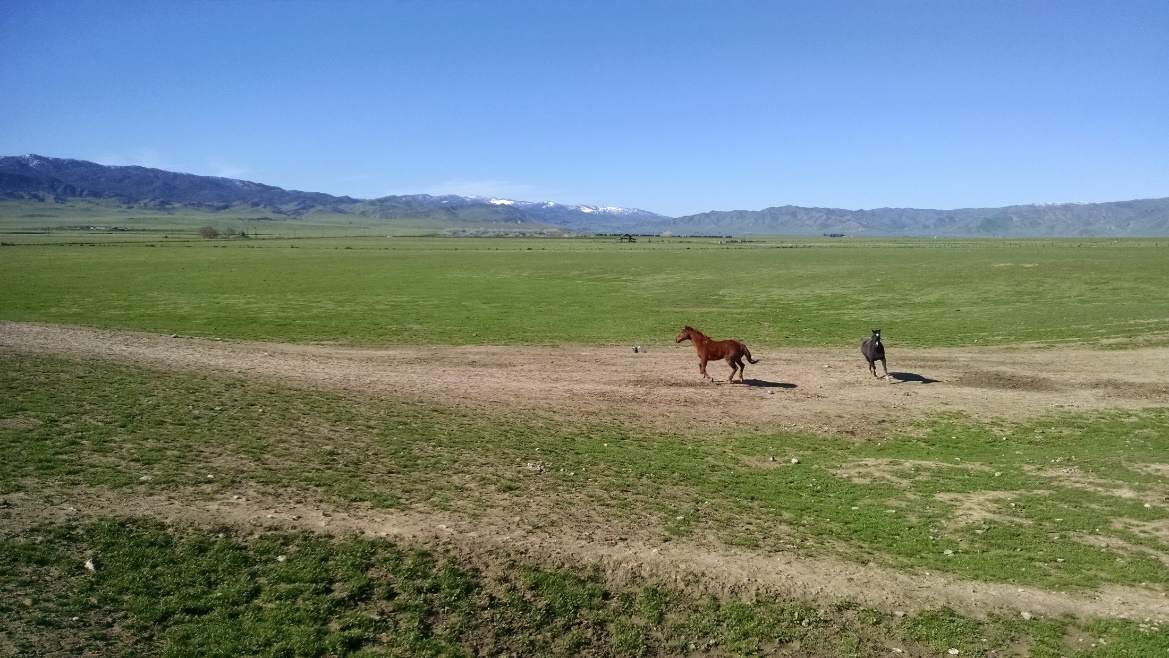 Federal agencies should stay the course

Nothing sheds light on value more quickly than direct market price signals. Nothing could be more meaningful to the private sector than to discover the heretofore hidden value of underused rural lands.

The Environmental Protection Agency’s EnviroAtlas is a good example of an agency-sponsored tool that has contributed smartly to environmental market infrastructure. Specifically, the environmental markets data layer has been developed in cooperation with the U.S. Department of Agriculture. This tool offers the general public (business and industry included) access to information supporting new markets such as water quality trading, another form of compensatory mitigation.

Farm bill legislation likewise can continue to build out environmental market programs developed by the USDA Office of Environmental Markets and implemented via the Natural Resource Conservation Service’s environmental markets program as well as the Forest Service’s program to monetize ecosystem services. USDA has made unequivocal commitments to inform and advise rural landowners about compensatory mitigation market opportunities.

Industry is still largely unaware that significant economic value can be found on underused land.

So has the U.S. Army. The Army Corps of Engineers is responsible under law for managing the nation’s wetlands mitigation program. The corps subsequently has developed the largest and most detailed database supporting compensatory mitigation credit markets. Its RIBITS website has tracked and accounted for wetland mitigation credits for the past few decades. More recently, RIBITS has incorporated Fish & Wildlife Service conservation banking data.

The corps also has been in talks to integrate EPA-USDA water quality trading data into RIBITS. This suggests a future one-stop-shop for landowners, industry and other mitigation credit market participants, something that would be a huge advance for the environmental marketplace overall.

Given the opportunities evident in these developing markets and the scope of agency programs supporting private sector interests, decision-makers may wish to consider the following steps that could improve mitigation credit marketplace efficiencies and participation. 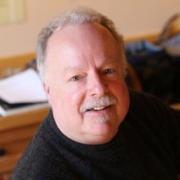 See all by William Coleman