With more people now employed in the solar industry than in the oil and gas pipeline business, what is the future of the clean energy workforce?

The U.S. solar industry now employs some 209,000 people, following a third consecutive year of 20 percent-plus job gains, according to a census of workers in the clean energy sector released today.

Washington-based nonprofit the Solar Foundation reports (PDF) that jobs in solar grew at 12 times the pace of the overall economy from November 2014 to November 2015, and that the industry is poised to add upwards of 30,000 more jobs in the next 12 months. The Solar Foundation report is based on survey data from 19,000 companies and counts only workers who spend 50 percent or more of their time on work related to solar energy.

The strong numbers come in the wake of several recent policy milestones — most notably President Barack Obama's Clean Power Plan, the accord at the United Nations COP21 Paris climate talks in December and the extension of the solar Investment Tax Credit (ITC) at the end of 2015 — all of which clean energy advocates point to as evidence of acceleration in an inevitable shift toward low-carbon energy.

"Very few other industries can tout this kind of growth," Andrea Luecke, president and executive director of the Solar Foundation, told GreenBiz. "On the other hand, the traditional fossil fuel-oriented energy generation sectors are sort of falling off the map."

While solar provider share prices and YieldCos have not performed well in the face of low oil prices over the last year, growth in coal, oil and gas employment also has slowed.

Here's a rundown of the data and what it might foretell about the future of the solar industry. The big questions: How will corporate clean energy buyers fit in, how much will new solar jobs pay, and who ultimately will benefit from the clean energy job boom?

The uptick in corporate renewable energy purchases is by now well documented, but that increased buying activity isn't yet affecting solar job numbers in a big way.

A full 63 percent of solar employment remains in the residential sector, while 15 percent of the workforce is focused on commercial and 22 percent on utility-scale development. But don't count on that split to last.

"I think we’ll reach a saturation point with residential," Luecken said. "Commercial is still a little bit of a laggard. With utility scale, it’s sort of limitless. We don’t want to cover the entire planet with solar panels, but there are tremendous efficiencies to be captured with the larger-scale systems."

Five or six years ago, at the height of the Great Recession, it was easy for solar companies to find willing installers, electricians and other technical labor. But that was then; the proportion of firms having a "very difficult" time finding qualified employees has climbed steadily, according to the report.

And for solar installers specifically, the proportion of firms having difficulty finding qualified talent last year climbed from 19 percent in 2014 to 26 percent in 2015. For solar sales and distribution, it was 23 percent during 2015, up from 20 percent in 2014. The sentiment that project development employment prospects are lacking doubled year over year, from 12 percent to 24 percent.

"Skills shortages are a huge concern of ours," Luecke said. "It’s gotten worse every year."

In addition to long and costly human resources searches, she added that well-trained talent is imperative to mitigate installation and operations risks, such as fires or collapsed roofs. And while it might seem natural to recruit out-of-work coal miners or oil field workers to clean energy employment, the enduring geographic variation between brown energy and green energy makes that a challenge.

"The solar workforce is very localized," Luecke said, noting that her group plans to release more data on the states with the highest solar labor demand next month. "Those are not hot solar markets," she added of states losing coal jobs, such as West Virginia and Kentucky.

One knock against the solar industry's high concentration of jobs in installation has been that those jobs don't necessarily pay all that well.

Solar installers earned median pay of $21 per hour last year, up from $20 in 2014. Manufacturers pay assemblers a median $18 per hour, just above the national median wage of $17 per hour. Sales and design specialists, meanwhile, make more like $27 to $28 per hour.

"I think wages will continue to be driven up because of a lack of skilled labor," Luecke said.

That market dynamic could create friction, however, as labor already accounts for 40 percent of non-equipment costs in solar, she added.

Installation of solar systems still made up the majority (65 percent) of new jobs added in the sector during 2015, although sales and distribution and project development are also growing. Manufacturing was the only segment of  U.S. solar employment to contract during the past year, the report found.

Although the overall decline of American manufacturing continues to unfold, Luecke attributes at least some of the nearly 7 percent dip in solar manufacturing jobs to something more specific. Namely, companies in other industries beginning to produce panels as a side pursuit, not meeting the threshold of employees with a minimum 50 percent focus on solar required for inclusion in the report.

There are nearly 50,000 women working in U.S. solar jobs of all types, the Solar Foundation reports, accounting for nearly a quarter of the workforce in the sector. That's an improvement, but the statistic also belies a broader lack of diversity.

Many think tanks, academics and activists have pointed to a green jobs gap in solar and other clean technologies, where economic gains linked to renewable energy go mainly to white men. Take solar installer demographics as an example of that criticism. 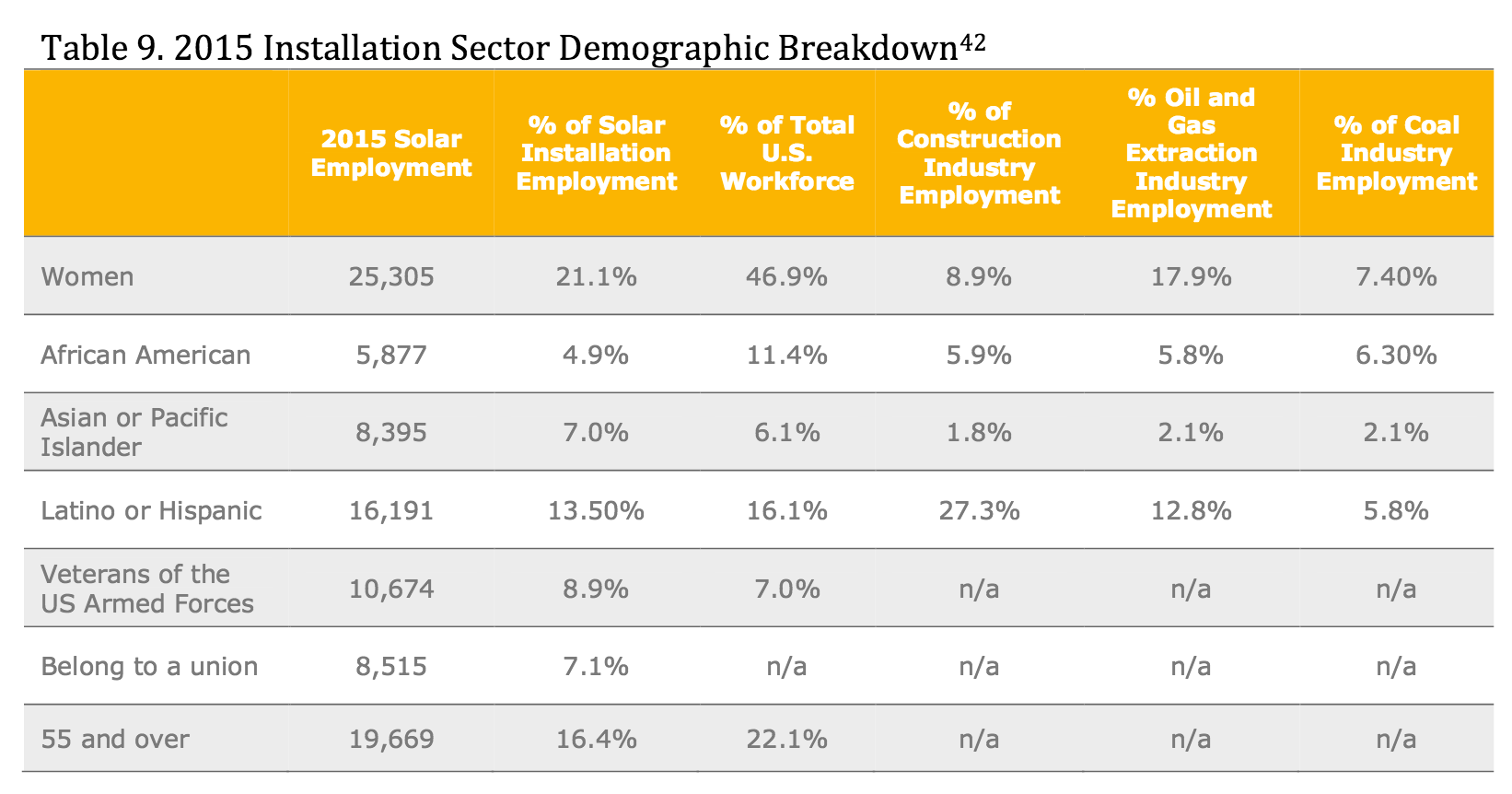 Women account for 21 percent of solar installers, which pencils out to 25,305 jobs. African Americans hold 5,877 solar installation jobs (5 percent), while Latinos hold 16,191 of those jobs (13 percent) — roughly on par with minority representation in oil and gas extraction jobs.

"The industry has made numerous proclamations that they intend to be more diverse," Luecken said. "Compared with other energy sectors, we’re doing OK. Compared with the overall economy, we have a lot of work to do."