In the past two years, as one record-breaking hot year followed another and property damages from western wild fires and eastern hurricanes mount, there's been a doubling in the number of insurance companies that seriously evaluate climate risk in their underwriting, investment and governance decisions, according to an analysis by Ceres.

But that means 22 insurers among 148 of the largest insurers do so rather than just the nine insurers that seriously considered climate risk in 2014.

Most of the 148 insurers evaluated continue to show an overall lack of focus in addressing climate risks and related opportunities.

"Most of the 148 insurers evaluated continue to show an overall lack of focus in addressing climate risks and related opportunities," Ceres stated in the executive summary to Insurer Climate Risk Disclosure Survey Report & Scorecard: 2016 Findings and Recommendations.

Ceres' analysis is based on insurers’ responses to surveys issued by the National Association of Insurance Commissioners on climate risk disclosure and required to be answered in six states — California, Connecticut, Minnesota, New Mexico, New York and Washington. Ceres looked at property and casualty insurers and health insurers writing at least $1 billion in premiums and life and annuity insurers writing $750 million or more annually.

Now that Hurricane Matthew has blown away $6 billion in property and businesses and memories are still fresh from Superstorm Sandy's mauling of $25 billion or more of homes, offices and city infrastructure, it may be time for more insurers to bring climate change to the highest levels of corporate governance and decision making.

Reinsurers and property and casualty insurers had the best record, particularly on risk assessment. Munich Re, Swiss Re, Allianz and ACE, which acquired Chubb Group earlier this year and now goes under the Chubb name, were among reinsurers that adopted quality risk and investment criteria along with property and casualty insurers Liberty Mutual, Nationwide, Travelers, the Hartford and John Hancock.

Munich Re, Nationwide and Erie are insurers that incorporate climate risk management across their enterprises and throughout their value chains such that products, services, capital management/liquidity and investments all reflect climate change risk modeling. Munich Re, whose CEO has given speeches on climate risk, is also using risk assessment modeling to understand both risks and opportunities in its investments into companies.

Liberty Mutual and USAA were seen as leading in climate change modeling and analytics, using their catastrophe modeling processes to inform decision making.

But only a quarter of property and casualty insurers engage their boards of directors in climate risk assessments and decisions. Swiss Re and Allianz lead in engaging their boards.

Among life and annuity insurers, Prudential and MetLife have involved their boards directors on climate risk decisions and discussions.

Fewer than 20 percent of property and casualty insurers make an effort to inform policyholders on how they can reduce climate-related risks or to engage with lawmakers on the issue, Ceres found.

"We've heard that many companies are thinking about these things internally but there is a distinction between those internal deliberations and what gets communicated publicly," said the author of the report, Max Messervy, who is manager of Ceres' Insurance Program. "We've found that investors in these companies are very interested in what they are doing about climlate risk, and certainly regulators are interested."

Among the most glaring omissions, only nine life and annuity companies were perceived by Ceres as giving serious or high quality consideration of climate change in their investment management strategies. Because life and annuity companies invest for the long term and their ability to pay claims rests on the success of those investments, some regulators found this noticeable.

In 2014, insurance regulators in those six states began requiring that insurers respond to the NAIC Climate Risk Disclosure survey in order to do business in their states.

Ceres’ analyzed the quality of insurers' responses to the NAIC survey along five criteria:

California Insurance Commissioner Dave Jones said the NAIC surveys themselves raised red flags about insurers' consideration of climate change in their investment strategies and the risk of holding stranded assets. Insurers are both underwriter and investors, he noted, and their business model depends on being able to grow their invested premiums in order to pay claims.

"The answers from these surveys led me to conclude that I need to take stronger action associated with investments in carbon," Jones told GreenBiz in an interview.

In January he asked insurers doing business in California to divest of coal investments and to disclose investments in oil and gas companies.

"One of the most important risks is the so-called transition risk, which is the risk of governments deciding that carbon can no longer be burned, and therefore carbon assets or oil and gas an coal assets become stranded assets on the books of companies," Jones said in an interview with GreenBiz.

Ceres found that the insurance industry held $459 billion in fossil fuel assets as of last spring.

"Thermal coal is, or will become, valueless," he said, citing the nearly 90 percent drop in the Dow Jones U.S. Coal stock index in the last five years and the fact that some two dozen coal companies have gone out of business. "I don’t want insurance companies holding assets that will be valueless."

Ceres, in rating the companies on the five criteria listed above, gave high scores to about half of property and casualty insurers — the group that has experienced steep losses from disasters. 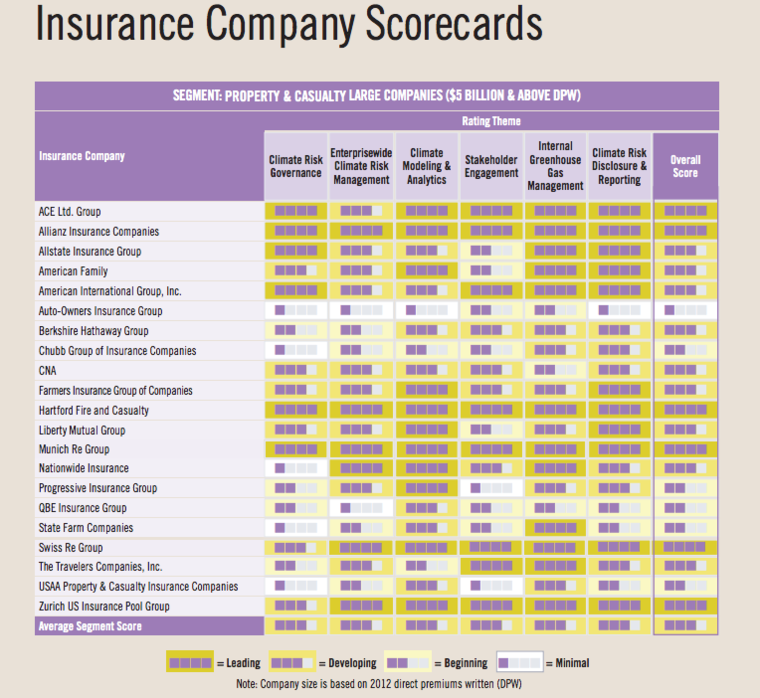 But no health insurers received a quality rating, even while both the National Institutes of Health and U.S. Centers for Disease Control have tracked a rise in warm weather-related vector-borne diseases and heat-related cardiovascular problems and allergies.

Reinsurers were the insurers that, as a group, seemed to take climate change the most seriously, Ceres indicated.

Why is the Insurance Industry So Eerily Quiet on Climate Risk?