3 challenges — and opportunities — for businesses to help save tropical forests

Never before in history has there been as much international attention and finance focused on the goal of solving tropical deforestation. The reason is quite simple.

Tropical forests could be critical to avoiding extremely dangerous impacts of climate change.

To unlock this potential, we must translate international announcements into actions on the ground. New strategies and commitments have inspired hope and driven important progress and innovations to slow tropical deforestation and speed its recovery following clearing, fire or logging. In half of the jurisdictions we studied, deforestation of primary forests is declining. But forests — broadly defined — are still falling fast.

We must do better.

In this article, I distill some of the main implications of new research into three main challenges and opportunities to overcome these challenges.

Most of these studies were released in San Francisco during the Annual Meeting of the Governors’ Climate and Forests Task Force on Sept. 11 and the Global Climate Action Summit. They included the "State of Jurisdictional Sustainability: Synthesis for Practitioners and Policymakers" (PDF)" study, a global assessment of 39 tropical forest "jurisdictions" (see map), led by EII in partnership with CIFOR and the GCF Secretariat, as well as other publications listed below.

The 39 jurisdictions assessed in the new EII-CIFOR-GCF global assessment of jurisdictional sustainability include 28 percent of the world’s tropical forests. All are striving to tackle tropical deforestation.

Challenge 1: Corporate deforestation pledges abound but few companies are partnering with tropical forest governments that have made pledges to slow deforestation

The last decade has seen hundreds of commitments by companies, governments and non-governmental organizations to do their part to slow deforestation. The most conspicuous pledges have been those by large corporations that have committed to remove deforestation from their supplies of commodities whose production can drive deforestation. Of the 473 companies committed to removing deforestation from their supply chains of major agricultural commodities, 155 have made specific commitments to achieve that goal by 2020 and 49 (10 percent) companies have report 75 percent or greater progress toward achieving their goals (see table below). 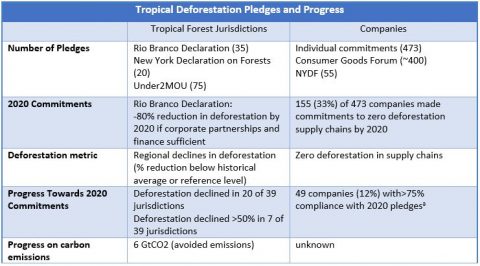 Less conspicuous are the pledges by 35 tropical forest governments to slow deforestation 80 percent by 2020, if they line up sufficient finance and market partnerships. These pledges are particularly important because they come from the governments who have their hands on most of the levers that can be pulled or adjusted to slow deforestation across nearly one-third of the world’s remaining tropical forests. The conditionality of these pledges, however, is crucial: many governments in tropical forest regions simply do not have sufficient capacity — human resources, institutional capacity, in some cases legal authority — to tackle deforestation alone. They need help.

The apparent convergence between marketplace and producer region ambitions has led to surprisingly few partnerships. Only four governments that signed the Rio Branco Declaration in 2014 have established formal contracted partnerships with companies that buy commodities from their jurisdictions. Far more companies have established "soft" partnerships with tropical forest governments through regional coalitions. The companies that have chosen to partner with governments — Unilever, Mars, Carrefour, Marks & Spencer, to name a few — are essential early movers in what could become an important new dimension of tropical forest solutions.

Beyond the essential work of these governmental networks, a global "green jurisdiction" registry is needed that allows tropical forest governments or multi-stakeholder groups anywhere in the world — beginning with current network members — to register their formal commitment to slow tropical deforestation and/or speed forest recovery, to disseminate the types of partnerships they are seeking to implement these commitments, and to provide core information about their policies, commodities and programs.

A global registry is needed that allows tropical forest governments or multi-stakeholder groups to register their formal commitment to slow tropical deforestation and/or speed forest recovery.

Such a registry is under development at the Earth Innovation Institute, building on the GCFImpact.org online jurisdictional information system. Some tropical forest jurisdictions, such as the state of Acre in the Brazilian Amazon, have developed individualized performance platforms with a focus on opportunities for business partnerships in low-carbon industries, which could become an important new trend.

Draft guidance for establishing effective corporate-government tropical forest partnerships to this end has been provided by the Steering Committee of the "Balikpapan Challenge" group on agricultural production and tropical deforestation, based upon surveys of GCF government representatives. A global system for supporting green jurisdictions should include all jurisdictions that have embarked upon the journey, not just front-runners; it should lead to mutually beneficial partnerships, and it should be consistent with, and supportive of, the producer region’s public policies and programs.

For corporate-government partnerships to flourish and proliferate, it will be crucial for advocacy NGOs that currently target corporate performance in implementing zero deforestation commitments to find ways to recognize and support promising new partnerships between companies and aspiring jurisdictions.

Challenge 2: Climate finance is flowing, but slowly and with many restrictions

California has established a high bar of rigor and transparency for both verifying emissions reductions and guaranteeing that the rights and livelihoods of indigenous people other forest communities are respected. This new California development could encourage other new carbon markets, such as those under development in China, the International Civil Aviation Organization and elsewhere, to follow suit.

As the world waits for a robust carbon pricing mechanism, climate finance for tropical forests has been a lifeline to many jurisdictions, lending credibility and political cover to bold political decisions to solve tropical deforestation; it also has provided critical financing for activities on the ground. Climate finance is still quite limited in scale ($2.3 billion have been disbursed or committed to the 39 jurisdictions) and flows slowly, usually through complex national government channels.

Most of the world’s tropical forest regions are challenging places to do business and risky places to make investments, and the 39 jurisdictions we studied are no exception. It is difficult and expensive to establish the rule of law across vast, unruly tropical forest frontiers. Rules and regulations are often complex and bureaucratic in their implementation, infrastructure is precarious, and economic elites often control and guard access to forests and their wealth, sometimes with force.

There is tremendous scope, therefore, to improve the ease of doing business and lower risks to potential financial investors. The state of Acre, for example, has supported innovative new low-carbon protein industries, local processing of non-timber forest products (such as condoms fabricated from native rubber), and has supported the state’s producer-owned cooperative, COOPERACRE, as analyzed in our forthcoming study of Acre’s low-carbon industries and institutions (go here [PDF] for Acre’s jurisdictional sustainability profile).

The state of Mato Grosso (PDF) has accumulated more than 700 million tons of CO2eq in verified emissions reductions, recognized by the national REDD strategy, that could be used to offer carbon-neutral commodities to its major soy markets or to create a forest fund, energizing its Produce, Conserve, Include Strategy.

In Caquetá, Colombia (PDF), the Ministry of Agriculture has launched its first sustainable production finance credit line through FINAGRO.

In Central Kalimantan, Indonesia, an "agricultural facility" has been created that can receive funding from partner companies and deliver it to smallholder farmers through technical assistance, part of an RSPO experiment in "jurisdictional certification."

Challenge 3: Indigenous peoples and other forest communities are still struggling to achieve formal recognition of their rights and support for their livelihoods

Considerable progress has been made in the last 10 years in some countries to formally recognizing the territorial rights of indigenous peoples and other forest communities. There is still a long ways to go, however. One challenge is to provide the necessary support to these communities for continuing and improving their forest-maintaining livelihoods. Indigenous peoples are often the "responsibility" of national government agencies, with varying levels of effectiveness in defending the interests of forest-based communities.

Subnational governments are often strategically positioned to partner with the indigenous peoples and other forest-based communities in their jurisdictions. In response to this opportunity, the Governors’ Climate and Forests Task Force established the "GCF Working Group on Indigenous Peoples and Local Communities," which released its "Guiding Principles for Collaboration and Partnership between Sub-national Governments, Indigenous Peoples and Local Communities" on Sept. 11. This Working Group is already fostering a rich exchange of lessons and innovations in how to make these partnerships successful. An early mover in this realm is the government of Acre, Brazil, that has been developing its government partnership with indigenous peoples across several administrations, as documented in the new study. 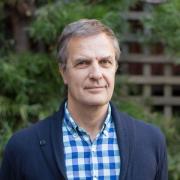 See all by Daniel Nepstad