These experiments are challenging the status quo around certain recycling processes.

Public awareness of the perils of plastic waste never has been higher, thanks to National Geographic’s June magazine dedicated to the problem. Company recycling commitments and governmental bans are on the rise, even as China’s ban on U.S. recycled materials continues to reverberate across the industry.

This pivotal moment of crisis and opportunity is a chance to reimagine and rebuild the U.S. recycling industry. As Nina Goodrich, director of the Sustainable Packaging Coalition, said in her keynote address at the recent SPC Advance conference: "We need to take the opportunity of the wakeup call from China to build the infrastructure that’s going to manage the materials of the future and not get caught flat-footed by looking to the past."

One of the biggest challenges is creating market demand for new post-consumer materials. "If everything is recyclable, but nobody wants it, is it recyclable?" Goodrich exhorted the crowd.

Companies can help solve this conundrum by working with both their supply chains to design materials that are more recyclable, and with the recycling industry to ensure that materials recovery is economically viable.

"Brands need to think about the entire system and engage the value chain, taking a leadership role on the design and innovation side but also playing a significant role in reimagining how this stuff gets through the system," said Bridget Croke, vice president of external affairs, Closed Loop Partners.

Which companies are offering models — or at least experiments — that are worth emulation? During the conference, I came across three examples of cutting-edge collaborations, where companies are driving innovation and working to modernize the U.S. recycling infrastructure. Although the efforts are still small-scale, they’re poised for growth. And worth keeping an eye on.

For decades, the coffee giant has led efforts to solve the stubborn problem of single-use cups, but this year it got a lot closer to cracking that nut.

The problem? Some 60 billion paper cups are landfilled annually in the United States because of inconsistent recycling infrastructure. Historically, one of the biggest challenges has been the removal and recovery of the inner plastic linings that are added to cups to prevent leakage.

By collaborating with its business and supply chain partners, including two paper mills and a cup manufacturer, Starbucks successfully has demonstrated that not only could multilayered cup liners be cost-effectively removed, but that a closed loop, zero-waste solution was possible.

Speaking at SPC Advance, Rebecca Zimmer, global director of environment for Starbucks, said that the closed loop initiative shows how "great things can happen when partnerships are formed that don’t typically work together, and you’re innovative about your working relationships."

When Zimmer discovered last year that the company had 18 truckloads — or 25 million cups — of excessive inventory destined for landfills, she used that revelation to introduce a closed loop cup recovery system, partnering with a paper mill known for its ability to process poly-coated paper into food grade product, Sustana. Other partners included a second paper mill, Westrock, and a cup manufacturer, Seda.

The initiative "debunked the myth around the difficulty of extracting the liner that’s in the cup," Zimmer said. "For me, the takeaway was that this is technically possible. It’s viable, and that got me excited that eventually we’ll get to the point where we’ll see this process being replicated more broadly."

Debunking that myth is key to broader replication. Perception remains that cups can’t be recycled, even as individual mills in the United States and Europe evolve paper pulping and cleaning systems to handle the material. Westrock in fact just announced that it would begin accepting paper-based foodservice packing, including cups, for recovery at eight U.S. mills.

"As more paper mills realize that other mills are successful at processing it, maybe they’ll take a look, and they may find that they’re very successful at it," said Jay Hunsberger, vice president of sales for North America at Sustana.

Ultimately, Starbucks wants to develop a cup that is both recyclable and compostable because many countries have zero recycling infrastructure and composting is a better option, Zimmer said. But working with U.S. partners to build its recycling capacity remains a priority.

"Our cups are not going to be recyclable until all cups, hot and cold, can be recycled and put into the system. We can’t do this alone," she said.

Flexible plastic packaging (FPP) is the fastest growing type of packaging in the United States, and no wonder. The stand-up pouches, flexible bags and wraps that crowd supermarket shelves are lightweight, malleable and durable. They extend the shelf life of food products, consumers like them and they’re less wasteful to produce.

But here’s the rub: until recently, it wasn’t possible to recycle the material in the U.S. recycling system. The recovery infrastructure wasn’t designed to handle it, and that means that some 12 billion pounds of FPP was destined for landfill yearly, according to industry data.

A collaborative initiative, led by companies ranging from global plastics producers to consumer goods companies, wants to change that.

Early next year, FPP will be recycled in a pilot at a materials recovery facility (MRF) in Pennsylvania. TotalRecycle will pick up the waste through its curbside recycling program, separate out the material and process it into bales that can be sold to end markets, such as durable goods and building materials.

To recycle the FPP, the MRF installed optical sorters, which were funded by a collaborative, Materials Recovery for the Future (MRFF), a project of the American Chemistry Council. MRFF has conducted research and development (PDF) for years to determine how best to recycle the emergent waste stream, which can gum up existing recycling infrastructure or intermingle with and lessen the value of paper bales.

To scale up, MRFF is exploring additional end uses for FPP bales. But more recycling facilities will need to develop the capacity. Nestle, PepsiCo and the other consumer goods companies participating in the pilot can’t label their packaging as recyclable when one small region of the country is involved. TotalRecycle plans an extensive consumer education program, but research shows that two-thirds of consumers don’t recycle material that’s not labeled as recyclable.

To spur more MRFs to join, the pilot program will continue its research. "We’re looking to document our learnings, provide data and recommendations for others interested in recycling FPP curbside," Tipaldo said.

"Chemical recycling," or recycling processes that break down plastics into their original building blocks to make them more reusable, was a hot topic at SPC Advance. Plastics typically are recycled mechanically, which degrades their quality and limits their reuse.

Polypropylene, for example, is one of the most widely used plastics, but its recycling rate is abysmal — less than 1 percent. That’s because the post-consumer product is a multicolored blend of feedstocks that can be reprocessed only into durable black plastic, according to Croke, who detailed the efforts of a new initiative to increase the plastic’s reusability.

The Closed Loop Fund is helping to finance the initiative, which is using a hybrid mechanical-chemical technology invented by Procter & Gamble. P&G open-sourced the technology, which reprocesses the recycled plastic into clear pellets and is under an agreement with an innovative investment firm, Innventure, to scale up the process at a new company called PureCycle Technologies. 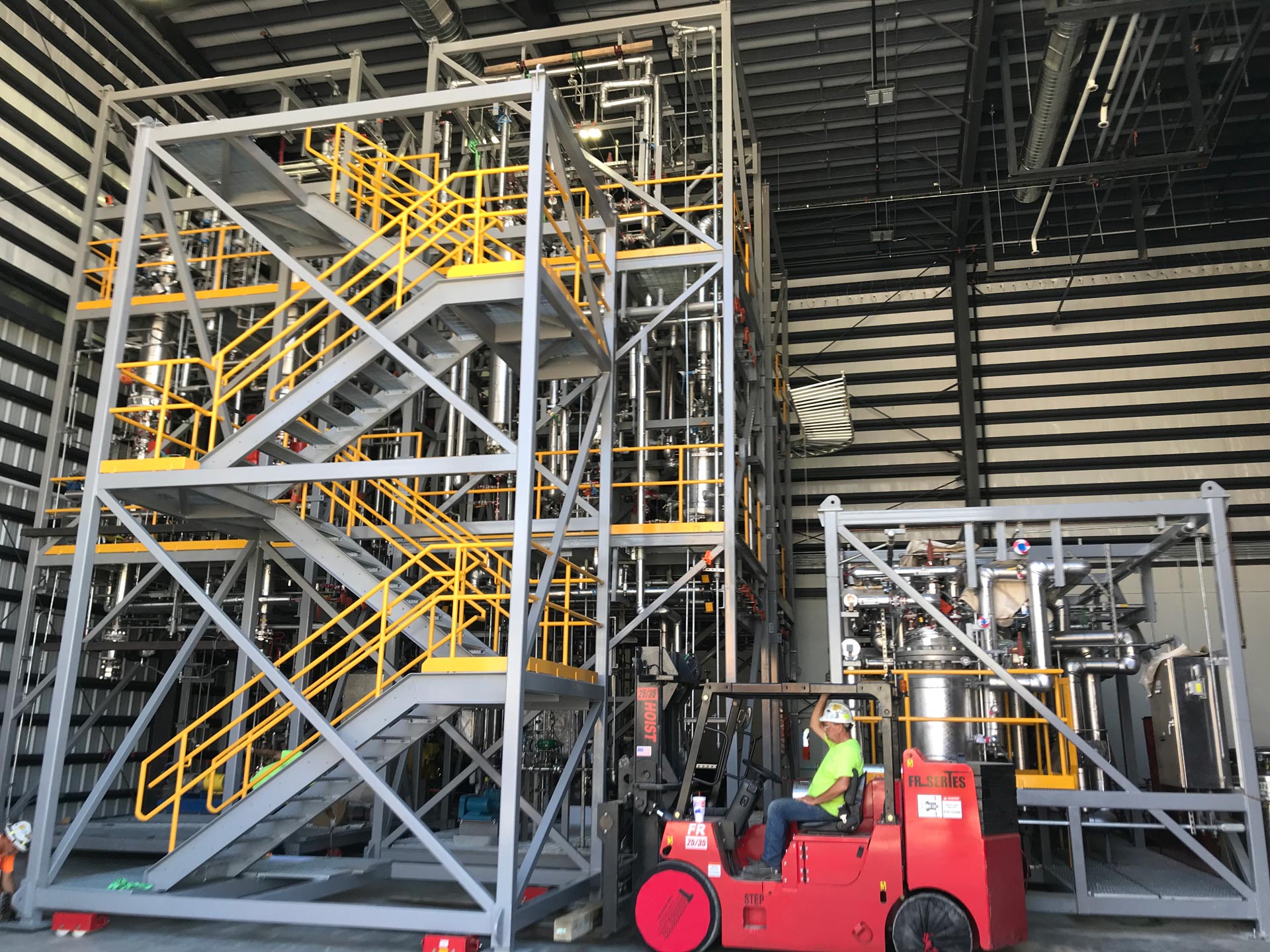 PureCycle is restoring polypropylene from plastic films, carpets, post-consumer material and other products. It’s still finetuning the technology but expects to have its first commercial facility in Ohio producing over 105 million pounds of recycled polypropylene annually by 2020, according to Betsy Nicketakis, manager of business administration and partnerships. Longer term, PureCycle plans to build more production plants around the world, she said.

Companies are signing advance contracts with PureCycle, according to Croke, who says this type of off-take agreement is a powerful tool for brands that want to invest in recycling infrastructure.

"As these technologies start to come into fruition, brands need to think about contracting for the material in a longer-term way so that these solutions can get off the ground, because oftentimes there’s innovation but then the price of virgin drops so low that nobody’s funding it anymore," Croke said. "The investment community will come in if they know that these solutions have markets."