This article is drawn from the Energy Weekly newsletter from GreenBiz, running Thursdays. Subscribe here.

There is no shortage of academics, business leaders, policymakers, NGOs, investors and climate hawks thinking about how to accelerate the global transition to a clean economy and energy system.

There’s already much to cheer when it comes to the adoption of renewable generation sources on the electricity grid. That said, there’s plenty of work ahead when it comes to decarbonizing the energy needed to power all manner of processes that underpin the global economy — most notably, transportation and industrial production.

Ideas for addressing the latter are at the heart of the widely anticipated report released this week by the Energy Transitions Commission (ETC) — a "mission possible" analysis (PDF) that offers concrete ideas for decarbonizing processes and sectors that will be notoriously difficult to abate in the time frame required by the Paris Agreement, such as aviation, steel production and the creation of plastics.

More than 200 industry experts were consulted to come up with this laundry list of ideas for cleaning up "harder to abate" sectors by 2060. "This report sets out an optimistic but completely realistic message — we can build a zero-carbon economy with a minor cost to economic growth," ETC Chairman Adair Turner said in the official press release.

The ETC, created to help accelerate the transition toward clean energy, is careful to point out that while its commissioners "endorse the general thrust" of the report, the organizations they work for haven’t necessarily embraced these ideas. Suffice to say, the cast of characters is diverse. It ranges from huge oil companies such as BP and Shell to energy technology players such as EVgo and Schneider Electric to utilities such as China Light and Power and Engie to all manner of NGOs and humanitarian organizations.

"What we are trying to do is give people confidence," Turner told me when we chatted about the report late last week. "We are convinced that there is no technological impossibility, resource availability issue or economic factor that would prevent us from getting there."

One of the biggest "ahas" for me was the extent to which thinking circular matters big time for emissions reductions. The commission figures that attention to circularity could reduce the carbon dioxide (CO2) produced by plastics, steel, aluminum and cement production by 40 percent by 2050.

What we are trying to do is give people confidence.

What developments are necessary? First, models that making better use of existing stocks of materials through recycling and reuse. And second, a focus on reducing materials requirements in the first place. The latter could include everything from the simple act of designing products to last longer to ones that would affect consumption, such as thing-sharing services that would ensure the stuff that does exist is used more efficiently.

Energy efficiency, which many companies have been talking about for years, still has the potential to help reduce emissions by 15 percent to 20 percent more. And policies that place a price on carbon-intensive processes will be important, not just in established economies such as the United States that are resistant to change but in developing countries such as India where infrastructure investments are coming at a fast and furious pace.

If you’re wondering how to prioritize investments, here are three "innovation areas" that will really matter in pulling off this dreamed-of transition. This list is gleaned from the six months of interviews it took for the ETC to produce this report (and from my own conversation with Turner):

1. Hydrogen production technologies: The ETC sees hydrogen (and ammonia) playing a role in decarbonizing transportation (ships could run on ammonia), and acting as a zero-carbon heat source and reduction agent for production processes.

That means we need to produce a whole lot more of it, in a far less carbon-intensive way — at least eight times what’s produced annually today. The call to action: investments in new electrolysis approaches and in changes to processes such as steam methane reforming, the primary method used to create hydrogen today. (Leakage of both CO2 and methane is a concern.)

2. Biochemistry and other new chemical formulas: The need to recalibrate the conversation around biofuels as an option for aviation and shipping is taking on more urgency — although neither sector is really held culpable under the Paris agreement.

When it comes to flight, it’s time to double down on research and development into synthetic or bio-based jet fuels. What’s possible at sea? Norwegian cruise line Hurtigruten this week committed to powering at least six of its ships using a combination of biogas (created from dead fish and other organic waste — here's to thinking circular), liquefied natural gas and batteries. 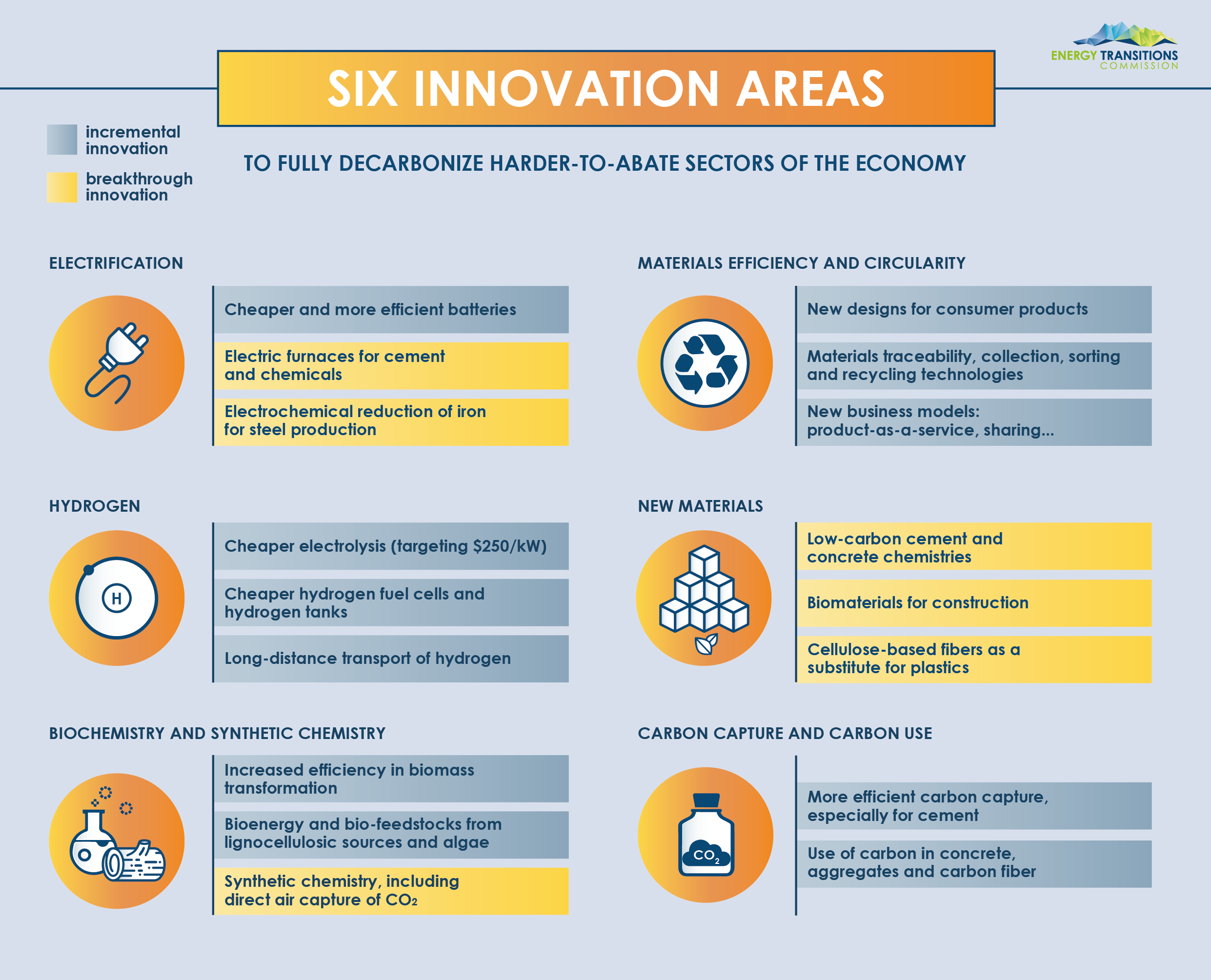 Biomaterials also will matter for reducing the demands for fossil fuels-based feedstocks in plastics production, according to the report. "Reaching zero lifecycle emissions from plastics constitutes a significant challenge, as it requires eliminating end-of-life as well as production emissions," the commission notes. "Limits to sustainable biomass supply will likely make it impossible to entirely substitute fossil fuels for bio feedstock. It will therefore be essential to manage the existing and future fossils fuels-based plastics stock through mechanical and chemical recycling, as well as secured end-of-life storage for solid plastics."

Plenty of chemicals companies are talking about this: it’s time to speed up that work. Incidentally, if you want to learn more about investments being made to address one specific facet of this problem — ocean plastics — register for the webcast I'm moderating at 1 p.m. EST Dec. 4.

3. Carbon capture and reuse: Much of the legacy dialogue about this controversial area of technology has been focused on potential applications at grid-scale power plants. The ETC report talks up the potential for carbon capture, carbon removal and carbon reuse innovations at the commercial and industrial scale — notably for concrete production (by using CO2 as an input). Another possibility: Use carbon capture methods to address the impact of steam methane reforming.

Download a summary version of the commission’s report here (PDF); if you want the complete, 172-page version, here’s the link (PDF).

When was the last time you chatted with your CIO, CTO or CDO?