3 reasons to get charged up about energy storage

How did batteries become such a sexy discussion topic among sustainability professionals? Here’s some advice for deciphering the headlines.

In the world of electricity, few topics are generating more headlines this year than energy storage. Market watcher Navigant Research figures more than 1,420 projects are under way across the power grid, with a new installation trumpeted almost every week.

"Overall, the global energy storage industry is poised to continue to grow quickly over the next several years," Navigant analyst Ian McClenny noted in a recent update about the market. "With emerging infrastructure becoming increasingly integrated, dynamic and complex, flexible resources like storage will provide added value to existing and new power-generating assets."

Although energy storage long has been a technology on the brink — drawing R&D dollars from the likes of Tesla founder Elon Musk, the U.S. military and a growing number of utility pilot projects — there is reason to believe that storage tech has entered a new phase in its evolution.

One statistic that should get you thinking: data from research firm Mercom Capital Group estimates that about $820 million was dedicated to energy storage project financing during 2016. That compares with just $30 million tracked by the company in 2015.

Several initiatives have captured the attention of mainstream media, rather than just the trade press: "A Big Test for Big Batteries," proclaimed The New York Times in a January article about three huge grid-scale projects in Southern California. The installations are part of broader investments by San Diego Gas & Electric and Southern California Edison meant to improve the stability of the local grid and make it easier to integrate renewable energy generating resources, including solar photovoltaic farms. One storage farm can offer up to 30 megawatts of capacity for up to four-hour stretches. Utilities in other regions are dabbling.

"It’s fair to say we don’t have long-range experience with this technology to say that it is perfect or a nirvana," Alice Jackson, vice president for Midwest utility Xcel, told The Times. "It’s something we’ll observe as California goes through its experience."

The most common reason we see people deploying these technologies is to reduce peak consumption.

Last year, the revenue for commercial and industry energy storage technologies — distinct from those focused on grid-scale applications — was less than $1 billion, but by 2025 it could balloon to $10.8 billion, according to separate data released by Navigant last year.

"The industrial building segment is expected to be the largest, deploying an estimated 9.3 gigawatts of cumulative new capacity over the coming decade, followed by the office and education building segments," wrote Navigant analyst Alex Eller.

For perspective, about 500 MW of capacity were deployed in 2016. That’s a rather aggressive anticipated pace of construction.

Naturally, literally dozens of technology purveyors are charging up for a piece of the action and to offer their "unique" world-view — particularly when it comes to technology focused on so-called "behind-the-meter" applications on site at commercial and industrial facilities, rather than as part of the larger grid.

Here are three things to keep in mind as you filter through the hype:

1. Storage emerges as a solution for demand response

Energy storage advocates love dreaming about applications that marry "intermittent" renewable generating resources with storage that can capture power for use during times when the sun isn’t shining on solar panels or the wind isn’t blowing turbines into a power-creating resource.

While there’s absolutely a correlation between organizations interested in clean power and those evaluating energy storage, right now, this is a fairly unusual model, said David Frankel, a McKinsey partner who specializes in energy issues.

"The most common reason we see people deploying these technologies is to reduce peak consumption," Frankel said.

Energy storage installations used for this purpose generally must be capable of supporting the power needs of a site for anywhere from 30 minutes to up to two hours, although the market for technology that can provide backup durations of four hours is becoming highly competitive, according to ongoing McKinsey research.

An example of this comes from Hawaii, where Hawaiian Electric Co. has been using one MW of energy storage installed at 29 customer sites — including local Albertsons and Whole Foods grocery stores — to help these facilities manage power spikes and reduce their consumption during peak demand periods. The lithium-ion technology and software being used by the utility comes from Stem.

"These customer-sited solutions strengthen Hawaiian Electric’s renewable planning as we build toward our commitment to a 100 percent clean energy future," noted Dora Nakafuji, director of the utility’s renewable planning team, in a statement. "This shows we can scale behind-the-meter energy storage to create a more stable and efficient grid as we provide customers with higher levels of renewable energy to reduce fossil fuel use and greenhouse gas emissions." 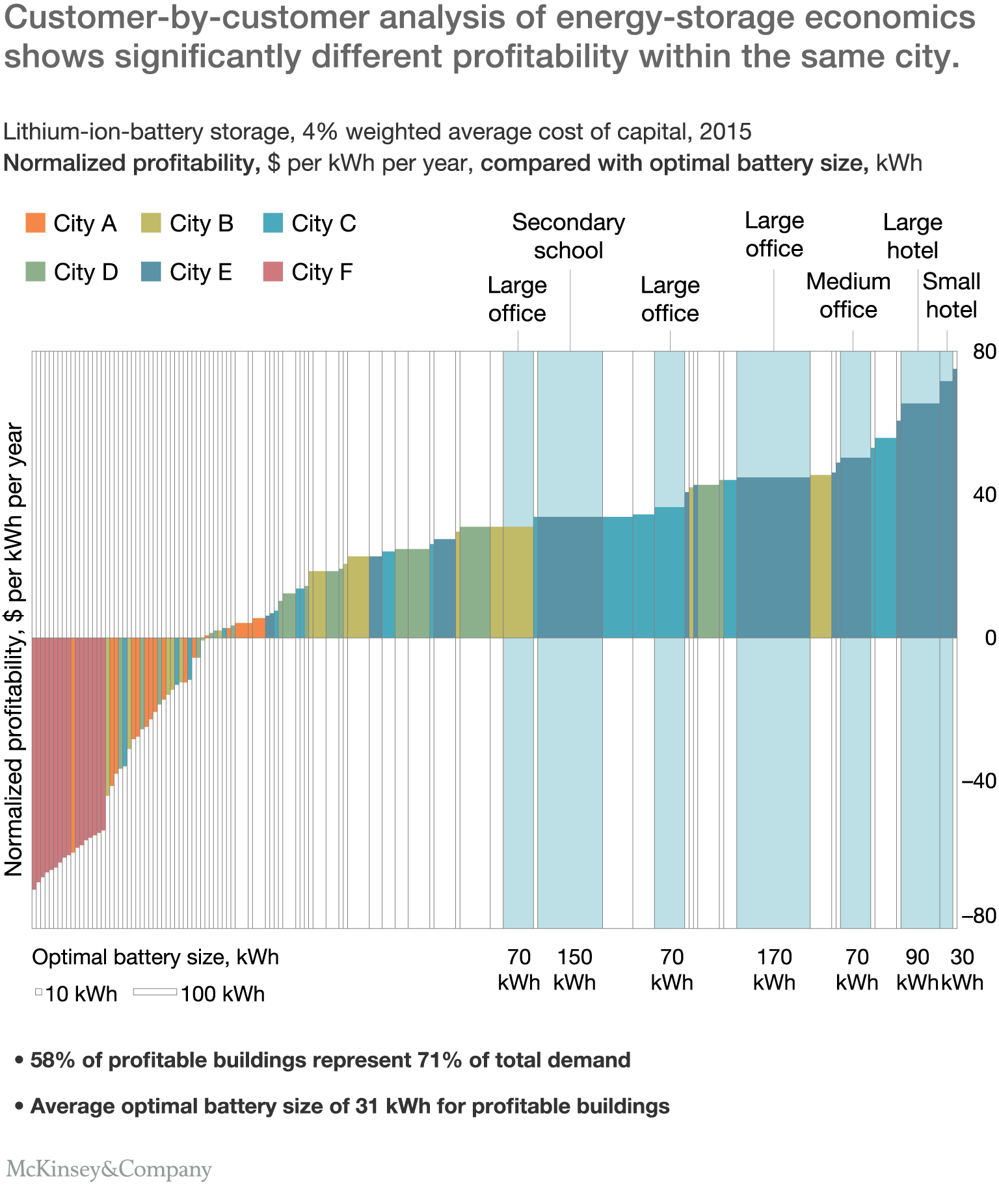 Like the Hawaiian Electric example, the massive energy storage projects drawing attention in Southern California are using lithium-ion batteries — the same things that power computers, smartphones and other electronics gadgets.

The supplier is AES Energy Storage, which builds arrays using batteries from Samsung. Electric vehicle company Tesla, another aspiring player in this market, also uses rechargeable lithium-ion devices as the foundation for its energy storage products. Its big partner in this vision is Panasonic.

Data suggests that 95 percent of the energy storage projects installed in 2015 used lithium-ion technology, but don’t assume that it will be the only "chemistry" or approach that matters.

The peakier the load, the better the value proposition.

The other three rounds involved:

Sonnen — The German company, which focuses on residential applications, raised $85 million from investors including GE Ventures. Its products use lithium-iron phosphate, which can handle more discharges and recharges than lithion-ion technology, according to the company’s U.S. vice president of sales Blake Richetta (a former Tesla executive). So far Sonnen has installed more than 16,000 systems, most of them in Germany. The company made a statement last fall, however, with a deal in Vermont that will see its technology installed through an affordable housing development. Under this model, the homebuilder will be able to offer grid stabilization services to the local utility — a scenario that Sonnen is exploring elsewhere in deregulated markets across the United States, Richetta said.

Aquion Energy — The much-hyped company pulled in $33 million last year from undisclosed private investors interested in its sodium-ion technology. Its future, however, was cast into doubt in early March when the company filed for Chapter 11 bankruptcy protection. "Creating a new electrochemistry and an associated battery platform at commercial scale is extremely complex, time-consuming and very capital-intensive," noted CEO Scott Pearson in a statement about the filing. The company seeks a strategic buyer.

Eos Energy Storage — Its focus is water-based zinc-cathode chemistry, a distinction that helped it raise $23 million in October. As of early February, the company boasted a $5.6 billion project pipeline.

Plenty of research and development projects EW under way. For example, a Stanford University chemistry professor is testing batteries that combines aluminum, graphite and urea — the chemical found in urine, and one of "the most abundant materials you can find on earth," according to the inventor. In the lab at least, the technology charges quickly and can be charged and discharged over thousands of cycles. It’s been used for vehicle batteries, but grid storage applications are the ultimate goal.

Another area worth watching centers on thermal approaches for storing energy. One player in this space is Calmac, which offers a twist on air-conditioning technology called IceBank. The chillers make ice during the night, when energy costs are traditionally lower, and then uses it to help cool the air being blown into the building during the daytime. The company’s equipment is used by more than 4,000 businesses — including Bank of America, Marriott, and Walmart — and schools worldwide, according to its website.

"We’re taking the load off the peak and throwing it into the downtime," said Calmac CEO Mark MacCracken. "The peakier the load, the better the value proposition."

3. Doing the math on ROI gets easier

Calmac’s technology primarily makes sense for organizations considering an update to a building’s existing air-conditioning systems, because it’s readily integrated with new chillers. It’s a tougher sell for facilities that aren’t as old or that don’t have adequate on-site space readily available for the installation, noted MacCracken. Still, "if people are sold on the technology, they will find the money," he added.

Frankel said it’s difficult to cost-justify energy storage as a backup solution or "full reliability" options — even though technologies capable of sustaining a site for four to eight hours technically are available. "It’s physically possible, but the economies aren’t there," he said. An analysis published in early March by Lux Research suggested that prices for lithium-ion technologies are falling quickly, but that "flow" batteries — ones that use chemicals such as zinc-bromine, vanadium or other combinations for recharging — will be viable for projects that require the storage to last for longer time periods.

"Li-ion has a lower levelized cost of storage at most durations and system sizes, but the amount of space required starts to drive up costs at larger scales," noted Lux analyst Tim Grejtak.

Right now, lithium-ion products "dominate" applications requiring 75 kilowatts to 100 megawatts of capacity, from 15 minutes to eight hours at a cost above $0.37 per kilowatt-hour, Lux estimated. Costs for the category won’t fall below $0.30 per kilowatt-hour until after 2036, the research firm predicts.