This issue isn’t going away for the e-commerce giant — and other industry leaders should consider themselves on notice.

To no one’s surprise, a highly publicized employee shareholder resolution asking Amazon to adopt a more detailed, transparent strategy for acting on the climate crisis fell short this week at the company’s annual shareholder meeting.

The proposal needed votes from at least 50 percent of Amazon’s shareholders to pass. Institutional investors hold about 58 percent of Amazon's shares, more than for any other company in the retail sector, and Vanguard is the single largest owner with about 6.16 percent as of Thursday. An Amazon spokesperson confirmed that the employee motion failed to receive that level of support, along with the other resolutions that had been put forward on other issues, including a proposal to ban use of facial recognition technology.

Twelve resolutions were up for vote this year on Amazon's proxy statement, a record number. Last year, there were just three. As of Thursday afternoon, the company had not released details about the vote tallies for this year.

But, actually, the resolution — born in late 2018 — was highly successful on a number of fronts.

What this all represents is a significant shift in thinking — that is what our approach has been all along.

"We have already seen big wins," said Jamie Kowalski, a software development engineer and one of the 28 current and former employees who signed the resolution. A marketing video shown during the meeting in Seattle showcased leaned heavily on initiatives that weren’t in place just a year ago, Kowalski acknowledged in a conversation with GreenBiz. "A large part of what they shared [in the video] was in response to what we were doing."

1. Even though the resolution didn’t pass, it already has triggered some change

Amazon has been talking up its support for solar and wind power for about five years. Its commitment comes in the form of an open-ended pledge to 100 percent renewable energy, and like its chief rivals in cloud computing services — Microsoft and Google — has backed a variety of projects. It reached the halfway point in 2018, and announced three new contracts last month totaling about 229 megawatts.

What the company hasn’t been talking about — at least externally — is a long-term plan to reduce the substantial footprint related to all those vans, trucks, trains and planes that deliver the stuff people buy on its market-leading e-commerce site.

That changed in late February when Amazon introduced Shipment Zero, a commitment that includes reducing the emissions related to shipments to net-zero-carbon status by 2030.

At that time, Amazon also promised to share long-awaited information about its carbon footprint — along with specific goals and programs for reducing it. It has long avoided doing so, and this new level of transparency will be welcome, according to Kowalski and another resolution signer who spoke with GreenBiz, former employee John Mixon. "Most certainly and unequivocally, Amazon is not transparent," Mixon said.

"This follows an extensive project over the past two years to develop an advanced scientific model to carefully map our carbon footprint to provide our business teams with detailed information helping them identify ways to reduce carbon use in their businesses," the company wrote.

The carbon footprint disclosure is on the employees’ list of what they’d like to see Amazon be more upfront about. They’re also calling for a number of other measures, including a complete transition away from fossil fuels, for "climate impact" to be part of the decision-making process when evaluating new revenue opportunities, a prioritization of mitigation strategies that reduce "harm to the most vulnerable communities first" and for a new approach to policy advocacy at the local, state and federal level. 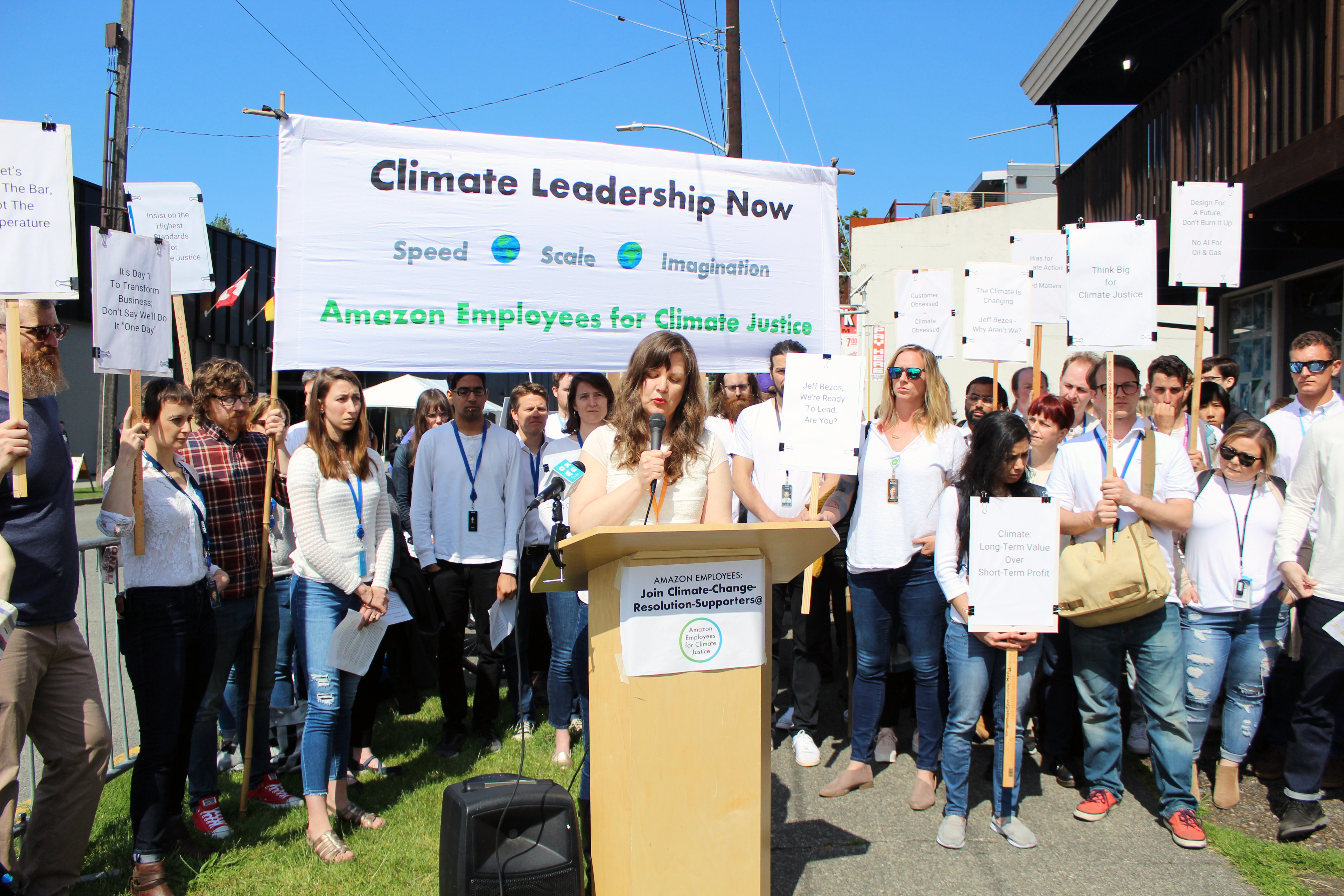 So what happens next? The group that organized the resolution, Amazon Employees for Climate Justice, is already talking about refiling another resolution ahead of the next proxy season. Currently, the group also is setting other initiatives into motion, although details aren’t yet available. It's been emboldened and "overwhelmed" by the number of employees who signed onto the letter of support for this cause — most supporters are from the United States, but Amazon divisions in Europe, India and part of South America are also represented.

"We’re talking and figuring out where to go," Kowalski said. "What this all represents is a significant shift in thinking — that is what our approach has been all along."

This group is not afraid to be confrontational. During the meeting this week, resolution co-filer Emily Cummingham addressed her comments about the proposal directly to Amazon founder, chairman and CEO Jeff Bezos, who was not on stage during her presentation. "We have the talent, the passion, the imagination," she said. "We have the scale, speed and resources. Jeff, all we need is your leadership."

When asked about climate change later during a question-and-answer session, Bezos offered this non-answer: "It’s hard to find an issue that’s more important than climate change. The science is super compelling on this. There’s no doubt about it."

3. Every company should prepare for a new era of activism

Given its market capitalization of more than $890 billion, Amazon makes a highly visible target of shareholder activists. What’s unique and notable about this employee resolution, however, is that this call came from shareholders within the company — representing a group that doesn’t typically have the ear of Wall Street financiers or powerful institutional investors.

The employees did find some champions for their cause, however. Two of the largest proxy advisory firms, Glass Lewis and Institutional Shareholder Services, both recommended a vote for their resolution.

"We believe that the additional disclosure requested by the proposal would benefit the company by allowing shareholders to better understand how the company is ensuring resilience to climate-related disruptions and would provide reassurance to employees that issues related to climate change are being taken seriously," wrote Glass Lewis in its advisory document.

Ethan Powell, founder of Impact Shares, a nonprofit issuer of exchange-traded funds supported by the Rockefeller Foundation’s Innovative Finance initiative, said marginalized stakeholders are becoming more vocal about their environmental, social and governance issues. Resolutions such as the one considered this week at Amazon will become more important as a differentiator — not just among employees but also among other stakeholders, such as customers, he said.

Impact Shares is allied with organizations such as the National Association for the Advancement of Colored People and the YWCA — it has created ETFs with both of them, indexed to include companies that prioritize diversity, climate justice and women's empowerment, among other issues.

"These organizations are barometers for social change," Powell said. "We are trying to use capital markets as a mechanism for engagement."