As leaders of knowledge and innovation, universities are places where sustainable futures are imagined. They are institutions where experts research emerging issues and generate new ideas. They contain multitudes of idealistic and adaptive young students who can be mobilized to protect their futures. It is only natural that some of the most progressive sustainability ideas are emerging from universities.

Universities around the world are striving to curb their wasteful tendencies as well as to foster an atmosphere that encourages environmental consciousness. Here are three areas of campus life that universities have sought to make greener:

One of the most pressing issues pertaining to environmental sustainability at universities is transportation.

A 2011 study (PDF) by Complete College America reports that 75 percent of all college students in the United States commute to campus, often traveling by car, bus and other carbon-emitting vehicles. Overall, the transportation sector is one of the country’s highest contributors to greenhouse gas emissions.

In university settings, one of the most logical, effective and popular alternatives to fossil fuel-powered vehicles is the carbon-neutral and human-powered bicycle. Universities around the world have increasingly have encouraged bicycle use through programs such as bike sharing or by providing financial incentives to purchase a bicycle.

The University of Nottingham in the United Kingdom has been internationally recognized for its sustainability initiatives, receiving acclaim as Greenmetric’s top sustainable university for a four-year stretch, winning multiple Green Flag awards from Keep Britain Tidy and more. It should come as no surprise, then, that students have worked to revamp the university’s transportation system.

Aaron Rymer, with the local Ucycle bike-rental program, explains that the initiative aims to cut energy use and promote health through cycling at affordable prices: a year-long rental costs only about $72. Students and faculty alike have used the program to great success, with all 220 bicycles rented out every year. Biking increased by 50 percent after the launch year (PDF download), and in fall 2015, 70 more bicycles were purchased in order to grow the organization.

In addition to its impact on university transportation, Ucycle’s effects reach far beyond campus. Enactus Nottingham, a university organization dedicated to sustainable businesses, now runs the nonprofit program. As Rymer explained, "Any funds made are used for bike maintenance or to support Enactus’ other projects — including one called 'Aquor,' a solution for turning dirty water into clean and drinkable water which we have delivered to Cameroon over this summer."

Universiti Putra Malaysia has encouraged students to cycle by providing a tuition reimbursement of about $72 per student to purchase a bicycle. Additionally, recyclables such as bottles and cans can be traded in for bicycle tokens, which can be put toward renting a bicycle. The bicycles can be used on the newly installed bike lanes around campus.

One study on students’ attitudes toward bike paths at several Malaysian research universities showed that students at Universiti Putra Malaysia favored bike lanes the most out of all universities surveyed, by almost double. If their bicycles break, students can get them fixed at the Basikal, a bike repair and consultation store that originated on the university’s campus.

2. Divesting and reinvesting in a fossil fuel-free future

Despite the immense influence that a university’s student body holds, certain things remain in the control of the school’s administration — such as investments. Universities often will invest their endowments in profitable yet environmentally harmful sectors, such as the fossil fuel industry.

In response, the Fossil Free movement, operating under the initiative 350.org, is devoted to pressuring universities, cities, institutions and more into divesting from fossil fuels. Drawing inspiration from campaigns to divest from South Africa in the 1980s, it puts pressure on universities to make morally just investments instead of supporting fossil fuels. The movement is sweeping the world, from Sweden (Swedish) to South Africa and beyond. 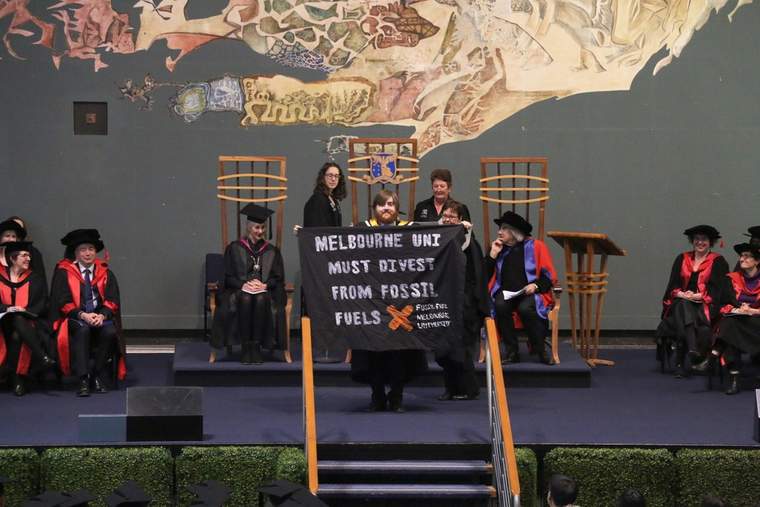 The divestment campaign has had mixed success, and some universities have pushed back against students affiliated with the movement. Critics have cited aversion to politicizing endowments, a lack of financially sound alternatives to fossil fuels, limited impact to the fossil fuel industry, as well as the comparatively small investment in fossil fuels made by colleges in the first place. This is complicated by the fact that most universities do not release the details of their investments.

However, divestment makes a statement demonstrating an institution’s opposition to fossil fuels as a viable source of energy. It is less about the economic impacts of divestment than about the social, political and moral impacts. When top universities, often leading the way in technology, science and knowledge, cut ties with the fossil fuel industry, it sets a precedent for a wide range of other institutions and also can influence individual opinions about fossil energy.

Additionally, the money regained from divesting can be reinvested in more sustainable and equitable companies and organizations, such as clean energy companies, low-income communities and small local businesses that will contribute toward a more sustainable future.

Spotlight: The University of Massachusetts

Joining the growing ranks of universities that have divested from fossil fuels, the University of Massachusetts in the U.S. northeast divested last spring. The schools has lauded itself as the "first major public university to divest from direct fossil fuel holdings," a statistic that could influence other public universities as well as the state governments that fund and oversee them.

"It’s more about a statement of what the University of Massachusetts wants to stand for, and where we can have the direct influence is where we have direct investments," said University of Massachusetts president Martin T. Meehan. While it is too early to tell whether other schools will copy this example, or what the long-term effects will be for the university, it is possible that others will follow suit.

On the other side of the world, students at Melbourne University in Australia have been campaigning for over three years in support of divestment. Despite student outrage, the university still chooses to invest its endowment in fossil fuels. Nevertheless, Melbourne University’s Fossil Free campaign is an impressive example of well-organized student activism, from its "Carbon Carnival" to its greatly successful student referendum. The campaign directly has addressed the university’s reservations on divestment as well as documented past actions that show the students’ passion for divestment. This campaign is one to be followed by any university fossil-free movement.

3. University farming and moving toward self-sufficiency

It is no secret that consuming locally grown, in-season produce reduces carbon output and has various health and economic benefits (PDF). Farmer’s markets and home gardens are a great way to support local agriculture, reduce carbon footprints and eat organically. However, most university students live away from home (where they may have been more connected with local food) and are housed in large dormitories without a space to garden. Their main food source is the university dining hall, often run by large corporations such as Aramark and Sodexo. However, growing numbers of universities have turned to growing their own food through community gardening or farming programs.

Rated No. 1 in the United States for campus dining by the Daily Meal, Duke University Dining not only appeals to students’ taste buds, but also provides well-balanced, healthy and sustainable food. Duke has a detailed plan for sustainable student dining, which includes identifying its food vendors and listing its goals.

Sustainability can be interjected into almost any aspect of university life.

Additionally, the university has committed to sustainability initiatives such as composting, recycling waste oil and banning items such as bleached napkins, trays, styrofoam and high-fructose corn syrup. In 2015, Duke became one of the few U.S. universities to be Marine Stewardship Council-certified (PDF), which ensures that the dining hall will serve seafood that is both sustainable and healthy.

While the long list of Duke’s local partners is impressive and largely comprehensive, perhaps the most notable endeavor is the Duke Campus Farm. This lucrative on-campus farm provides most of its produce directly to Duke Dining, allowing students to partially source their meals from their backyard. The remaining food is sold through a community supported agriculture (CSA) program, allowing the farm’s impact to reach into the surrounding community.

In 2015, the Duke Campus Farm provided one ton of watermelons for the annual first-year picnic, familiarizing incoming students with the importance of eating locally and sustainably. The program is only growing, having nearly doubled in size in the last year (PDF).

Costa Rica’s EARTH University, dedicated to agricultural studies as well as to sustainability and preservation of the tropics, is also farming its own food and providing most ingredients in the school’s cafeteria. The school’s extensive Integrated Organic Farm (FIO) experiments with new, cutting-edge green techniques that aim to support a sustainable future for Costa Rica and the surrounding region, filled with considerable but vulnerable biodiversity. Concepts that EARTH has experimented with include getting the maximum value out of the produce and creating less waste.

"In cocoa production, we use the seeds to make our finished product, but 80 percent of the cocoa plant is peel that would normally be unused," said Arnoldo Avila, manager of FIO. "We process the peel to make liquid fertilizer, or extract pectin to make jelly, or we make a tea from the peal [sic]. We are using everything that would normally be discarded in other agronomical operations."

Students often take the lead at FIO and have experimented further with cocoa by using solar energy and even direct sunlight to dry out the seeds, a crucial step in cocoa processing. Through other experiments, such as with biochar and worm compost, EARTH is generating a large amount of technology that can be applied to farms around Costa Rica and beyond. Much of the food that is grown goes directly to the university’s cafeteria, providing students with healthy and delicious meals that were grown right on their campus.

Given the large populations of most universities, many people can get involved and create great change. Participation, connection and cooperation in sustainability activities can be a great way to strengthen community and social ties.

Universities not only have the means to become more sustainable, they also have the responsibility to do so. With enrollment reaching into the tens of thousands, they have a correspondingly large environmental impact, stemming from transportation, investment in the fossil fuel industry and on-campus eateries. Universities can set the standard for individuals and other institutions to become more sustainable.

As the above examples show, sustainability can be interjected into almost any aspect of university life. Institutions may hesitate to take action on sustainability because of perceived risks or the safety of the status quo. However, growing numbers of universities across the globe are proving that these fears and restraints are not an excuse, and that change actually can be a good thing.

What are the 10 coolest universities?