Greenhouse gas emissions are at record highs. The world's major emitters recently failed once again to reach an agreement to limit emissions. In the midst of all the gloom and doom, it is understandable that the International Energy Agency's latest World Energy Outlook has not received the attention it deserves.

But anyone seriously concerned about climate change needs to understand two fundamental constraints that emerge from this report. How we respond to these two constraints will determine if there is a reasonable way forward on climate change.

The first constraint has to do with trajectory of energy-related CO2 emissions required to keep the average temperature increase below the commonly accepted 2 degrees C threshold [PDF]. In the graph below, the IEA calls it the "450 Scenario" where the atmospheric CO2 concentration stays within 450 ppm.

It requires emissions to peak around 2017. By 2035, emissions in the 450 Scenario need to be just half of what we would have in the business-as-usual Current Policies Scenario. The difference between these two scenarios is as much as 22 Gt CO2 per year by 2035, about two-thirds of today's total energy-related CO2 emissions. 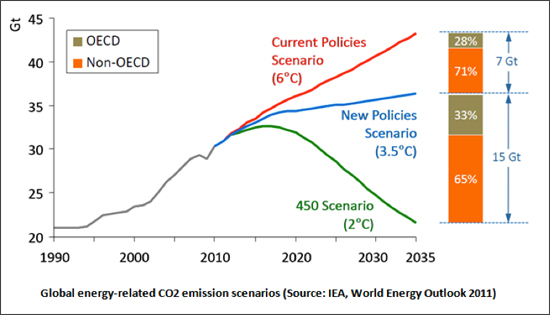 Before we ponder how to find those reductions with current and future energy technologies and efficiencies, here is the second constraint that makes the task even more difficult. If we take no further action by 2017 -- a likely situation -- emissions locked in by existing capital stock (such as power plants, buildings, factories, and vehicles) will use up the entire carbon budget for 2035, leaving no maneuvering space to achieve the 450 Scenario.

As the graph below shows, these locked-in emissions will ramp down as older capital stock is phased out over time, but all replacements and expansions will have to be zero carbon! 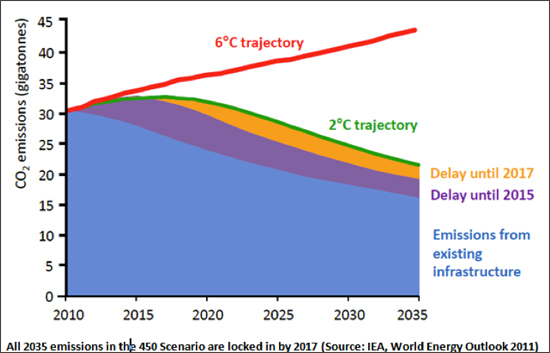 The IEA estimates that demand for primary energy will increase by one-third between 2010 and 2035, and 75 percent of all the energy will come from fossil fuels in 2035. The new BP Energy Outlook concurs with this trend and estimates an 81 percent share for fossil fuels in 2030. The 450 Scenario will be out of reach without rapid breakthroughs in renewable energy, battery technologies, biofuels, and carbon capture and storage (CCS). Unless, perhaps, if we are willing to think outside the box.

What if we could find practical and affordable emission reduction and sequestration opportunities outside of the energy realm that could offset a big part of fossil fuel emissions through 2035 and buy us the additional time needed for a full transition to clean energy?

A survey of recent research shows some remarkably simple ideas that, in some combination, may have the potential to take us to 2035 on a path equivalent to the 450 Scenario. I'll highlight three that seem down to earth, two of which provide substantial non-climate benefits:

1. Black carbon reduction. About 18 percent of global warming is caused by black carbon, a result of incomplete combustion of both fossil fuels and solid biofuels. Black carbon stays in the atmosphere for several days to weeks, and works by absorbing light and radiating out heat. The heated air molecules last longer and can move long distances. Black carbon also reduces the earth's reflectivity (known as albedo) when deposited on snow and ice, which further increases warming.

Solutions include: reducing particulate emissions from diesel vehicles; transitioning to clean-burning biomass stoves, brick kilns and coke ovens; and banning agricultural waste burning. There are large non-climate benefits by way of avoided premature deaths and reduced health costs and, to a lesser extent, avoided crop losses. Black carbon is expected to figure prominently in the next IPCC report.

3. Carbon sequestration via fallen-log burial. Dead trees on forest floors decompose in about 10 years, releasing carbon into the atmosphere. Slowing down the decomposition to a longer time frame (100-1,000 years) by burying or storing the fallen logs in anaerobic conditions could potentially sequester large amounts of carbon at a relatively low cost.

The potential is estimated to be around 10 Gt of carbon each year. There are risks, however, such as nutrient lockup, habitat loss, disturbance to forest floors and soils, and the need for some road construction. If these risks are managed well, while utilizing just a small part of the potential as I have assumed here, the impact could be substantial in the short term.

I have summarized rough estimates of climate change mitigation potentials, costs and benefits (by 2035 and beyond, in today's dollars, using current technologies) for the three solutions in the table below based on literature sources. More than half of the 22 Gt CO2 gap between Current Policies and the 450 Scenario could be closed using these three solutions alone if they are ramped up to scale before 2035.

In conjunction with advances in clean energy, efficiencies and conservation, these solutions could put us within striking distance of meeting the 2 degrees C challenge.

An approximate annual cost for the three solutions is about $238 billion at full scale, with the returns from enhanced crop yield and health benefits far exceeding this amount. Moreover, investments in these solutions would stimulate local manufacture and employment, and climate change mitigation by itself might have some additional monetary value in the future; however, the benefits are substantial even without including these.

While the non-climate benefits of black carbon reduction are greatest in the regions where much of the emissions would be reduced – particularly China, India and other developing nations in Asia and Africa – they do not necessarily go to those who might bear the costs. In addition, methane is fairly well mixed in the atmosphere and the benefits of methane reduction are more global.

This means that most of the mitigation will probably need to be funded by public means, particularly where the air pollution comes from public infrastructure, residential sources, small businesses and farms. Air quality regulations could be another mechanism to cut back on industry-generated black carbon and methane.

All of this suggests that there are plausible trajectories that can keep the long-term average temperature increase under the 2 degrees C limit. In the short term, any such path would involve readily available technologies, a highly engineered approach, modest public spending, and benefits that extend far beyond climate.

Is There a Leaner Way to Footprint?

Climate Change and the Consumption Trap

The Hidden Costs of Comparative Advantage

See all by Kumar Venkat