After Hurricane Maria made landfall in Puerto Rico in September 2017, one of the first things I saw outside were my neighbors working together to clear the streets of fallen trees and debris. It was difficult to see the damage and not feel an immense sense of sadness. Like others throughout the U.S. territory, only those with functioning generators had electricity, and no one could contact family members because the lines of communication were down. Those of us without generators couldn’t refrigerate our food, light our homes or use our bathrooms in a normal way.

According to official estimates, some 3,000 people died as a result of the devastating event. Running water became inaccessible in many homes. Roads were blocked. Across the island, power lines were downed, and power plants suffered significant damages, shutting down communications systems, traffic lights and hospitals, among other vital resources in day-to-day life.

It took nearly a year for the government-run Puerto Rico Electric Power Authority (PREPA, also known as Autoridad de Energía Eléctrica or AEE), the only power company in Puerto Rico, to restore electricity throughout the island. This was the biggest and longest power outage in U.S. history.

As scientists suggest that weather probably will become more extreme and weather-related natural disasters are likely to intensify in the coming decades, preparing energy systems for — and helping them recover from — weather-related disasters is an increasingly important topic. In the case of hurricanes, we can learn some valuable lessons from what Puerto Rico has gone through in the wake of Maria.

Puerto Rico’s electrical system is highly centralized, according to Lionel Orama-Exclusa, an engineering professor at the University of Puerto Rico (UPR) Mayagüez campus and committee member of El Instituto Nacional de Energía y Sostenibilidad Isleña. The institute brings together experts across disciplines and campuses within the University of Puerto Rico system to address energy policy and sustainability.

Before the hurricane, only 2 percent of the territory’s electrical power came from renewable energy sources. The rest was from petroleum (47 percent), natural gas (34 percent) and coal (17 percent). And because Maria hit Puerto Rico about a decade into an economic crisis, the electricity infrastructure was already vulnerable. The EIA found that before the hurricane, PREPA’s electricity generators were 28 years older and experienced outage rates 12 times higher than the U.S. average.

"Other countries should look at themselves in the mirror of austerity," says Arturo Massol-Deyá, a biology professor at UPR Mayagüez and long-time environmental activist with Casa Pueblo, a community-based organization founded more than 30 years ago to protect natural resources in Puerto Rico.

"By not paying attention to infrastructure and not having maintained it, by not doing [the] things that are necessary, when a hurricane happens like this, the consequences are catastrophic," Massol-Deyá says. "Other countries need to be careful when they manage their economic crisis and the rest, not to place their countries in a position of increased vulnerability before natural events."

Lesson 2: The value of decentralization

Aguirre Power Plant is one of the four main power plants on the island. Located in the southern coastal town of Salinas, it supplies electricity to the San Juan metropolitan area in northeastern Puerto Rico. The Los Angeles Times reported that the power plant already was neglected and suffering failures before the hurricane. After the hurricane, Aguirre was not operating; about two months after Maria swept over Puerto Rico, PREPA was still working to restore a powerline from Salinas to the north.

It makes a lot more sense to have your energy generation closer to where it’s going to be used, as opposed to long-distance.

Hurricanes often interrupt shipments, "so you have oil shortages, diesel shortages, gas shortages, coal shortages," says lawyer and activist Ruth Santiago, a long-time Salinas resident with ties to the Comité Dialogo Ambiental, a group that works towards environmental protection and sustainability. "It makes a lot more sense to have your energy generation closer to where it’s going to be used, as opposed to long-distance. … [T]hat means that communities now need to be involved in energy generation."

Orama-Exclusa says the Puerto Rican government should use the Island Energy Playbook, which is part of the U.S. Department of Energy’s Energy Transitions Initiative and recommends a framework for an energy transition that communities can use. It also includes lessons learned from various islands that have been making energy changes, and templates and worksheets for proposed work. For example, the playbook showcases the creation of "clear and well-defined interconnection policies and procedures" in the U.S. Virgin Islands, which in 2010 set a goal to reduce their reliance on fossil fuels 60 percent by 2025.

Renewable energy sources in particular are a focal point of the ongoing discussion about the resiliency of the sources of electricity on the island.

Orama-Exclusa says that renewable energy sources, such as solar power, can boost resilience. A system based on renewables could support the creation of micro-networks of energy that are more resilient than centralized distribution systems. Some households already have started using solar energy, so they can depend less on the main PREPA grid. According to National Public Radio, Puerto Ricans are expected to spend more than $400 million on solar power in the next five years.

A system based on renewables could support the creation of micro-networks of energy that are more resilient than centralized distribution systems.

Poverty, however, is still a significant obstacle for many people, says Massol-Deyá.

Yet Massol-Deyá and others are concerned that despite the advantages that renewables offer for boosting resilience to future hurricanes, the Puerto Rican government might be moving away from renewable energy sources.

Eye to the future

After the hurricane, the government set up the same infrastructure that was present before, Massol-Deyá says. If close to a Category 3 hurricane or above were to make landfall in Puerto Rico, "the country’s electrical system would be just as destroyed as it was in 2017," Orama-Exclusa says — although recovery might be quicker because PREPA employees have an idea of what’s needed to get the system up and running again after such an event. There is also the question of what will happen if PREPA is privatized, because the Puerto Rican government is trying to sell it.

Groups from different sectors of society have proposed or created plans to guide Puerto Rico’s electrical future. Several plans are tied to the Puerto Rican government: the Plan Integrado de Recursos (PIR) or Integrated Resource Plan (IRP); the Restructuring Support Agreement (RSA) to restructure PREPA’s debt; and a law signed in April by then–Puerto Rican governor Ricardo Rosselló Nevares to establish the island’s energy public policy. Those three frameworks contradict each other, Orama-Exclusa says; which will prevail remains to be seen.

Eighteen organizations, including Espacios Abiertos, Cambio and the Instituto Nacional de Energía y Sostenibilidad Isleña, have asked that the restructuring agreement be canceled because it would benefit bondholders and increase the cost of electricity for consumers, Metro Puerto Rico reported. The agreement also was criticized in a letter signed in June by 36 U.S. congressional representatives, arguing that the deal should be rejected. The representatives expressed concern in that letter that the agreement "will increase Puerto Ricans’ electric bills and stymie development of renewable energy," according to a report in The Hill.

Even countries with no sunlight are moving towards solar energy.

Orama-Exclusa is concerned that the utility will move from petroleum to natural gas. "That would be contrary to the philosophy of the rest of the world, because even countries with no sunlight are moving towards solar energy," he says. His concern isn’t unfounded: El Nuevo Dia reported in July that construction is underway for a new electrical power plant in northern Puerto Rico, which will run on natural gas.

According to Orama-Exclusa, Puerto Rico’s situation suggests that governments should agree on one vision for their energy future before establishing a regulatory framework and renegotiating debts. Additionally, he says that the vision should be agreed upon by citizens through an open, participatory system. Then the government and policymakers need to adopt that vision and make energy plans that go along with the vision.

If this strategy is put into place in Puerto Rico, the more resilient energy production and distribution system that results could help the territory deal with future hurricanes better and bounce back faster than was the case with Maria. Perhaps then there could be less suffering and fewer deaths such as those that have left a deep wound in the hearts of countless Puerto Ricans, even as they strive to move forward to prepare themselves for a potential future hurricane.

Editor’s note: Mariela Santos-Muñiz wrote this story as a participant in the Ensia Mentor Program. The mentor for the project was Aleszu Bajak. 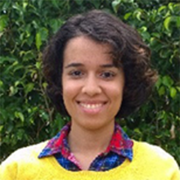 See all by Mariela Santos-Muñiz