'Tis the season for low expectations on climate change and other global sustainability challenges. Yet there's no reason to think our stockings will forever be stuffed with coal.

Enormous worldwide business innovation is taking place to build a clean sustainable economy and it's just a matter of time before it translates into huge financial rewards and a new business paradigm.

The question is whether that moment arrives quickly enough, and that in turn depends as much on Wall Street's economic pulleys and levers as government policies. The bad news is that today's Wall Street is simply too short-sighted, rewarding immediate payoffs over forward thinking that deals with long-term environmental, social and business challenges.

Strong carbon-reducing policies are unlikely to emerge from climate negotiations in Cancun and the new Congress in Washington. Yet many businesses and investors understand they must move now to develop products and services with a low carbon footprint that use fewer resources, whether fossil fuels or water.

In just the past few weeks, some of the nation's largest utilities, automakers and technology firms have announced bold plans to upgrade their offerings with next-generation technologies for electric cars, a smart grid, energy storage and zero-emission renewable energy.

Major investors are also greening their portfolios. The California Public Employees' Retirement System recently announced plans to target $500 million at environmentally-friendly companies. "This strategy will allow us to become more directly involved in positive change by top performers that have improved share value and also done good for the environment," said CalPERS board president Rob Feckner.

In addition, there is a growing evidence that investors using environmental, social and governance (ESG) analysis in their decision-making outperform traditionally managed funds that often ignore these issues. A new RLP Capital analysis (PDF) of the eight largest traditional mutual funds and the eight largest ESG funds showed that the ESG funds had significantly higher returns over the last three years. ESG is also gaining traction among investors; just over $3 trillion is now invested in funds using ESG analysis, a 13 percent jump from 2007.

These trends are encouraging, but the stark reality is that sustainable capitalism is still a long way from being embedded in the U.S. and global economy. CalPERS' $500 million green investment sounds impressive, but it's still only a tiny fraction of the pension fund's $200 billion in assets. Exelon can now boast being the nation's largest wind energy provider, but its clean energy investments pale in comparison to what Exxon and other oil companies are spending -- $200 billion! -- extracting oil from highly viscous oil sands in Canada, a process with far-reaching adverse environmental impacts.

So what will it take to put the 21st century economy on a more sustainable path?

Of course, government policies that reward clean technologies and discourage high-polluting ones are a big part of the solution. But ending myopic practices on Wall Street and across the rest of the economy are equally critical.

Our financial markets remain far too biased towards short-term returns and far too blind to less obvious long-term risks such as climate change, water scarcity and other resource constraints. The subprime mortgage meltdown and financial collapse was an exceedingly painful reminder of such 'short-termism' and the deep, systemic failure of long-term risk accountability economy-wide.

Building a sustainable economy means that many below-the-radar rules and practices for dealing with long-term risks like climate change, oil sands production and water scarcity must dramatically change. Some practices I'd like to change today include:

• Mainstream investor policies and practices that routinely ignore climate change risks -- regulatory, litigation, physical and competitive, along with major opportunities -- as part of their due diligence for evaluating companies.

Until these practices change, the all-too-incremental progress we've seen to date in building a clean, more sustainable 21st century economy will not be enough to ensure a safe and prosperous future.

It is essential that all market players -- companies, investors, accounting firms, rating agencies, policymakers and more -- start acknowledging the colossal long-term risks we face and get to work on comprehensive solutions that will mitigate such global threats.

We can seize a great opportunity now -- aggressive energy efficiency measures alone could create up to 750,000 jobs in the U.S. in the next decade -- or pay a big price later. Seems like a clear choice, no?

This article originally appeared at the Huffington Post and is reprinted with permission. 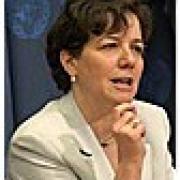