Letting a revenue stream slip away from you, and actually paying someone to take it away, sounds like bad business. But that's what companies do when they send their trash to get dumped in a landfill.

Out of all the sustainability and efficiency efforts companies have adopted, one of the biggest shifts in thinking has come from goals on sending zero waste to landfill (usually shortened to "zero waste").

Companies in almost any industry are seeing significant savings -- General Motors, for example, has brought in $2.5 billion in revenue through recycling over four years and Walmart has cut by over 80 percent in one state alone the amount of waste it has to pay to send to landfill.

Not surprisingly, getting to zero is not an easy task. But as the examples from several companies who've traveled the path to zero waste show, there are some common elements to any successful strategy.

There is a common recipe for a lot of these initiatives -- a little bit of material reduction, a whole lot of recycling and reuse, and a bit of incineration (also called waste-to-energy) -- and they come down to four general categories that can help you structure your efforts:

Zero waste is not just for giant corporations -- the lessons that these companies and others have learned can help just about any company identify, reduce and even eliminate their waste streams entirely.

1. Know What You Have

The only way some companies have accurately determined what trash they're dealing with is by getting their hands dirty -- literally -- with a dumpster dive.

Procter & Gamble's waste reduction teams have sorted through trash at its various facilities, which make everything from makeup to shampoo to batteries to dog food.

Once you've figured out what kinds of waste you're creating, then you've got to keep it separated.

Before grocery retailer Supervalu started its landfill waste reduction push, its Albertsons stores in southern California were sending 2.4 million pounds of waxed corrugated cardboard to the trash. The material, which is used to ship produce, frozen food and other wet items, can't be traditionally recycled due to the wax coating.

Next page: How General Motors manages waste at its 76 zero-waste sites around the globe.

Two Albertsons stores -- which now send less than 5 percent of their waste to landfill -- found a solution by partnering with a company that turns the cardboard into fireplace logs. But first the store started sorting their different wastes, keeping waxed cardboard separate from other fiber-based materials as well as trash.

Sorting waste, though, needs to become second nature. It needs to be accessible and be treated as just the way things are done.

Sometimes it's not just how to sort waste, it's where. When Caterpillar's Aurora, Ill., plant started working on its waste, it quickly became clear that the best way to address it was to go right to the source. To that end, the plant put recycling in place along assembly lines and set up a conveyor to use for sorting waste. Just three months later, 40 percent of the trash along the lines was getting recycled instead of dumped, creating a projected savings of $200,000 a year.

Other than "low-hanging fruit," the most overused adage in green business is "you can't manage what you don't measure." But setting goals and working to meet them is still a tall order for just about any type of waste-reduction initiative, so it's worth noting how goals and metrics can keep a company on track to zero waste.

General Motors, which has 76 zero waste manufacturing facilities and 10 zero waste non-manufacturing sites around the world, says a key to its effort has been rigorous tracking of waste along with setting goals and metrics to hold plants accountable. 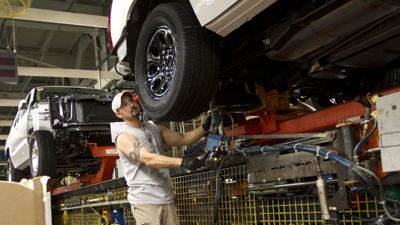 Pete Pearson, director of sustainability for Supervalu, says a metrics-based approach, although not as accurate as something like tracking energy, is key. "Although measuring waste is not a perfect science, every effort must be made to accurately account for materials being diverted from landfill," he said. "It must be clear to stores the correlation between landfill diversion and cost savings." Key to that is making the whole process, from sorting to tracking, easy to integrate in to employees' workdays.

Don't make recycling something that is seen as an extra effort; it needs to just be the way things are done.

A couple of Walmart's efforts on its journey to zero waste have been to change how employees think about waste (i.e. it's not trash until it's in the trash can) and the location of waste bins.

Next page: How to get employees engaged on zero waste

Doug Sanders, Walmart's senior manager of store operations and sustainability, said stores have looked at where they have waste containers and reallocated where bins for trash or recycling should be. In some cases, trash cans are turned into recycling bins, and one of the biggest-impact changes was also a no-brainer: The company put recycling bins at cash registers.

In addition, when employees are stocking merchandise, they now have recycling bags attached to the carts they use to make it easy to collect things like plastic wrap. "It's not a major change to their job. It's a simple function that makes it easy for them," Sanders said. "If it's difficult, it's going to be very difficult for them to want to execute the programs we want to put in place."

Companies with successful zero waste programs don't just make recycling and waste sorting a job employees have to do, but something they want to do and can get excited about.

Some have created special designations or titles for waste managers, such as PepsiCo U.K.'s "waste marshals," who are empowered to do what's necessary to deal with waste. In the U.S., PepsiCo has 13 Frito-Lay manufacturing sites sending less than 1 percent of waste to landfill. Frito-Lay plants have "site champions," and team members are assigned specific waste streams to oversee. Waste teams create scorecards and use waste bills to track the effectiveness of programs.

In addition to making waste a part of plant manager evaluations, GM rewards employees for new waste-reduction and recycling ideas.

"The key to converting these plants is people and process. For the team, it becomes a sense of pride for those that work at those facilities, and it reflects in quality and throughput," Bradburn said.

Supervalu has also developed a rewards program, Pearson said. "Whether a store director is being proactive and creating partnerships with a community farmer, or if a store associate is stepping up to lead recycling efforts in the break room," he said, "there has to be engagement from all levels of leadership, including executive leadership encouraging and praising the positive behavior."

4. Find a New Life for Waste

One company's waste is another's raw material. While that doesn't have the same ring as the original axiom, but the fact remains that there are plenty of companies that thrive on the trash of others, either using it to make new products or running their operations in some way.

Procter & Gamble has devoted an entire group of employees to seeking out others who can use its wide variety of wastes, and also to find a use for inventory the company is unable to sell or would toss in the trash. The company's Global Asset Recovery Purchases (GARP) team has worked in countries around the world to find new uses for P&G's scrap product and packaging.

Feminine hygiene pads from a Hungary plant get shredded and burned to power a cement kiln, mascara gets turned into tire shine, shampoo goes into a car wash -- the list really goes on and on.

Through GARP and other efforts, P&G now has eight zero waste manufacturing plants in Belgium, Hungary, Italy, the United Kingdom and elsewhere.

GM has developed innovative ways to take byproducts from manufacturing operations and turn them into car parts or supplies. 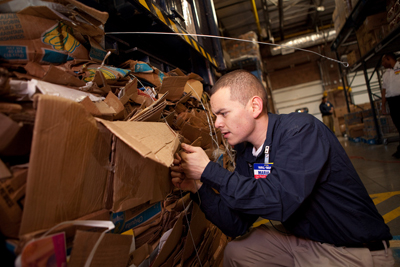 For example, cardboard used in shipping finds a new life as sound-absorption material, tires from vehicle testing are shredded and made into air and water baffles, and paint sludge is turned into plastic shipping containers.

Walmart has also found plenty of solutions through other companies or non-governmental organizations. When the company was seeking out places to send its food waste, Walmart worked with the Environmental Defense Fund and the U.S. Environmental Protection Agency. But Sanders said that in its search, Walmart found plenty of individual sites it could send compost or animal feed, but no nationwide infrastructure that all of its stores could take advantage of.

So it did what only Walmart could do: It created its own network.

The company went state-by-state, looking for potential partners in companies and service provides, and identifying what was lacking. In addition to connecting composters and others who could take the waste with one another, Walmart put out calls for business in areas where solutions were needed.

In some cases, Sanders said, entirely new companies were started to serve Walmart's needs, knowing they'd be able to pull in other customers as well by putting a food waste program in place where none existed before.

View Zero Waste is a Journey

Let's pull out another cliché to close on: Like any sustainability initiative, zero waste is a journey, not a destination. If you want to be successful, don't just look at zero waste a goal to be met and then moved on from. The best and most effective programs are a constant process that, like energy efficiency or water reduction, can always be improved on.

Once you've hit your original targets, read about what other companies are doing, search for new partners and others that can reuse waste, try to make as little trash as possible, and whatever you do, don't put anything in the landfill.