Companies often struggle with building community trust as they navigate between profit-making and authentically engaging on climate change and environmental justice matters.

Last week at GreenBiz Group’s virtual conference and expo on stimulating the clean economy, VERGE 20, community leaders and businesses from across the country came together to network, share insights and explore solutions to these challenges.

During the panel "Connecting Communities to the Clean Economy," experts shared their experiences working with private companies, their fights for green jobs and why businesses need to think of themselves as part of the community. The talk featured two women of color and leaders within the environmental and economic justice movement: Elizabeth Yeampierre, executive director of UPROSE (founded as the United Puerto Rican Organization of Sunset Park); and Rahwa Ghirmatzion, executive director of PUSH Buffalo (People United for Sustainable Housing); with Heather Clancy, editorial director at GreenBiz, acting as moderator.

Panelists explained how their community organizations and business partners have successfully collaborated in the past. The conversation provided an insight into how companies can understand the communities they serve, the area they’re in and the people they employ. Communicating genuinely and authentically listening are two key components. Here are four key takeaways:

1. To build real, authentic community trust, businesses must be willing to listen to community concerns and respond with effective community-oriented solutions.

Ghirmatzion talked about PUSH Buffalo’s work with a local hiring hall that connects New Yorkers to jobs. This initiative provides both hands-on training for people in the Buffalo area who have been underemployed for long periods of time and employment opportunities in renewable energy projects and green construction. According to Rahwa, at least "99.9 percent of them were folks of color."

For example, a few years ago, about 24 of PUSH’s trainees experienced racist harassment and open hostility from their white coworkers and supervisor. When PUSH brought their concerns to the company’s CEO, the organization investigated the matter and fired the supervisor. Workers and community members alike appreciated the company’s quick action and zero tolerance, Ghirmatzion said. Listening to the community and taking their issues seriously is crucial for building trust, she observed.

2. Private entities should think of themselves as community members and view local residents as political and economic partners.

For Yeampierre of UPROSE, the most successful partnerships have been ones in which businesses joined local initiatives and shared the same political and environmental goals as the community. According to Yeampierre, UPROSE has had excellent relationships with some companies and terrible relationships with others. The excellent relationships have been with businesses that seek input from UPROSE on climate adaptation and embrace UPROSE’s best practices for environmental justice and community resiliency.

Yeampierre cited two successful partnerships. Sims Recycling Solutions worked with UPROSE from the beginning to become a carbon-neutral state-of-the-art facility that would serve community needs but not be an eyesore or polluting facility on the industrial waterfront.

Additionally, UPROSE has received support from Patagonia since 2011. In this mutually beneficial relationship, Patagonia also provides financial support for UPROSE’s environmental work. UPROSE has helped Patagonia have an office culture in which its employees join in UPROSE’s grass-roots organizing. As Yeampierre said, "Sometimes businesses don't see themselves as part of the community, and see our community as a front for wealth for them." She encouraged private businesses to view the community they operate in not as a resource but as a partner.

3. Businesses and developers need to embrace resilient thinking rather than viewing job creation and profit-making as their key goals.

Yeampierre got a chance to provide a brief overview of UPROSE’s work to protect Sunset Park’s industrial waterfront from land speculation. UPROSE was at the center of a triumphant seven-year-long struggle against the rezoning of Industry City in Brooklyn. However, the rezoning would have created thousands of jobs.

Developers viewed this project as a win-win, but activists and community leaders opposed it because the jobs would have been mostly low-paying. Plus, the influx of high-end retail and new office jobs would spur gentrification.

Yeampierre argued that waterfronts such as Sunset Park are where we need to start building for "climate adaptation, mitigation and resilience."

"It's what we call a green reindustrialization of our industrial waterfront," she added.

Businesses should avoid trying to fight long, drawn-out battles that ignore the wishes of the community.

Making a resilient New York means investing in renewable energy, energy efficiency retrofits, construction, sustainable manufacturing and food security, all of which would create thousands of jobs. We need these things now, because as Yeampierre said, "We know that climate change is here." The campaign to preserve the waterfront was a significant victory for industrial communities all over the U.S., who are told they ought to accept new jobs that rely on the extraction of fossil fuels and displacement. Sunset Park’s future could become a model for converting an industrial zone into an environmentally friendly infrastructure through green manufacturing.

Businesses should avoid trying to fight long, drawn-out battles that ignore the wishes of the community. Instead, it’s vital to support community-led proposals consistent with a resilient green future from the beginning.

4. Companies can use their communications resources to showcase community climate activists' voices and a voice in the fight for a just transition.

Both UPROSE and PUSH Buffalo are a part of NY Renews, a coalition of over 140 community, labor and grassroots organizations working to end climate change in New York while safeguarding workers. Moderator Clancy asked how being members of this coalition amplifies their work. Both panelists agreed that the legislation NY Renews fights for, such as the Climate Mobilization Act, which passed last year, makes it easier for smaller social justice-based organizations to show their communities it’s possible to have a just transition. This legislation would generate thousands of jobs, lower greenhouse gas emissions and lower energy prices.

Companies also can benefit from supporting the work of NY Renews because a just transition is an idea that appeals to workers and communities who fear that the process of reducing emissions could lead to a future with fewer jobs and more poverty. For UPROSE, being in NY Renews "helps us build locally, but it also helps us build the scale, and it helps us create the kind of regional impact that climate change demands. We need to be thinking big and locally," Yeampierre declared. Supporting or doing similar work as NY Renews, creating green and decent jobs, can help private enterprises show that they want to support resiliency and want communities to thrive.

In their closing remarks, both panelists reiterated their earlier comments on authenticity and seeking community input as soon as they start planning a project. Authentic was the word the panelists most used to describe the kind of relationship and behavior they would like to see from businesses.

"Authentic" is the characteristic you should want the community to think of your company as, and you should meet that expectation, the tow community organizers observed. That is, authentic businesses genuinely communicate; they find out what their community wants and take the impact they have on the community seriously. People who live in the community can offer many solutions and critical perspectives because they’ve been working on these issues for generations, they concluded. 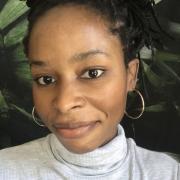