4 Ways Timberland Will Halve Its Carbon Footprint by 2015

Just a few weeks ago, we brought you the news about how Timberland's carbon footprint inched up 11 percent last quarter. That turned out to be a bit of a surprise for the outdoor retailer.

Armed with this information, Timberland will focus on keeping its emissions flat for the remainder of the year, a period during which it expects its business to continue growing. At the same time, the company plans to keep its eye on another goal in the distance: halving its carbon footprint by 2015.

You may recall that Timberland initially set a goal to reduce its 2006 emissions by 50 percent by 2010. It came up short with a still-impressive 38 percent drop. With plans to expand its business, Timberland shifted the 50 percent target to 2015. 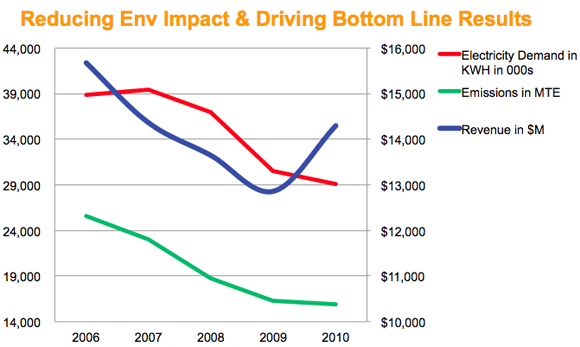 With its emissions seemingly on the rise, I spoke with Timberland's Beth Holzman to learn more about the company's climate strategy and how it would also hit its 2015 target. Holzman outlined four steps the company is undertaking or exploring, and even offered some general advice for companies struggling with aligning their business and environmental goals.

"What we're trying to show is that it is indeed possible to reduce our environmental impacts while growing our bottom line, provided that we're prioritizing the right kinds of efficiencies, cost-saving projects and ways to ensure that these environmental initiatives really make business sense and that they're not just tag-alongs that have a pure environmental motive," Holzman said.

1. Targeting the Big Wins: Using geographical and facility-type breakdowns of its carbon footprint, Timberland has targeted its biggest, most energy-intensive facilities for renewable energy exploration.

"There are some facilities, such as our larger offices in Europe for example, where we know if we could make a switch by taking advantage of offerings from utilities that have the infrastructure for clean energy at a reasonable price, that would draw down our emissions quite a bit," Holzman said.

2. Buying Energy in Bulk: Timberland is beginning to explore bulk energy purchasing in the U.S. and Europe to save money that is then re-allocated to clean energy.

"We absolutely don't want to be pursuing anything that increases our bottom line costs, our capital expenditures, but if we can be creative and not increase total costs, we can try to figure out better ways to gain access to clean energy,  which reduces our overall footprint," she said.

3. Incentives for Less Travel: With its revenue on the rise, Timberland has also seen business travel increase. Much of it is inevitable since the company needs to ensure that its products, which are manufactured around the world, are being produced in line with company standards.  In response, the company plans to look into how it could create incentives for individual business units to increase awareness and hopefully prioritize reduced air travel.

"One of the things we want to ensure here at Timberland is we don't want that kind of scenario to be the stick approach," she said. "Even though it may generate the environmental results we're looking for, it doesn't always help with overall integration efforts, buy-in and support across the business."

4. Quarterly Reporting: Timberland began reporting its social and environmental data on a quarterly basis since 2008 because it felt the process would aid its decision-making.

"We wanted to treat our social and environmental programs and decision-making in the same way as we treated every other aspect of our business," Holzman said. "We wanted to ensure that we could be accountable on a more timely basis but also to use that information to make mid-course corrections or look at adjustments in priorities."

1. Link your environmental goals to a business case

She noted that Timberland's environmental program has saved the company more than $1 million each year since 2006. "I don't know of any CEO who would want to leave that money on the table."

2. Focus on baseline measurement and use that baseline to prioritize projects

Holzman pointed to the company's decision to use its carbon footprint data to target big-win projects: facilities that use more energy than others. "That helped to demonstrate some of the opportunities to make that business case."

Buying energy in bulk is new for the company, but could give Timberland more flexibility to buy clean energy in areas where it is more expensive than conventional power. "That's a little bit of out-of-the-box thinking but it can actually help drive both bottom line growth and environmental success."

4. Build Ownership and Accountability Throughout the Company

Carefully embed sustainability across job functions so it becomes second nature to the job. "The folks responsible for energy purchasing and store buildouts, they have some pretty specific deliverables when it comes to their own work plans," Holzman said. "If you don't necessarily connect the dots, they may not think they're doing social and environmental work, but in reality, they are."

[Editor's note: This article has been updated to include a chart showing Timberland revenue, emissions and electricity demand trends; clarifies Timberland's intention to create incentives for employees to travel less.]