Public-private partnerships and education are central to its plans.

The United States, as well as other developed countries, were taken by surprise when the Chinese government implemented a ban on the importation of recyclables Jan. 1, 2018. However, the Chinese government had been sending signals for the past decade of its future plans around both the importation of recyclables and the development of domestic recycling infrastructure.

Eight cities in China were selected as pilot cities for pilot recycling programs as far back as 2000 in order to study the most effective programs. Recycling gained significant attention in June when Chinese President Xi Jinping stressed the importance of cultivating the good habit to improve the living environment and to contribute to green and sustainable development.

"Trash classification is related to the people’s living environment and the economical use of resources. It is also an important embodiment of the level of civic-mindedness," Xi said. "Extensive education and guidance should be carried out to make the people realize the importance and necessity of garbage sorting."

It’s very rare that the top leader, rather than the ministries in charge of the industry, make such strong statements about recycling.

Importantly, it demonstrates the priority that China has placed on the development of its own domestic recycling programs and infrastructure, as part of its effort to combat environmental issues that threaten the health of its 1.4 billion citizens. It also explains why China carried out the ban in the first place; it is continuing to shift its focus to developing domestic recycling infrastructure to feed its massive manufacturing base. Xi has made clear that the public sector will support the private sector to develop infrastructure to turn "waste" into opportunity. 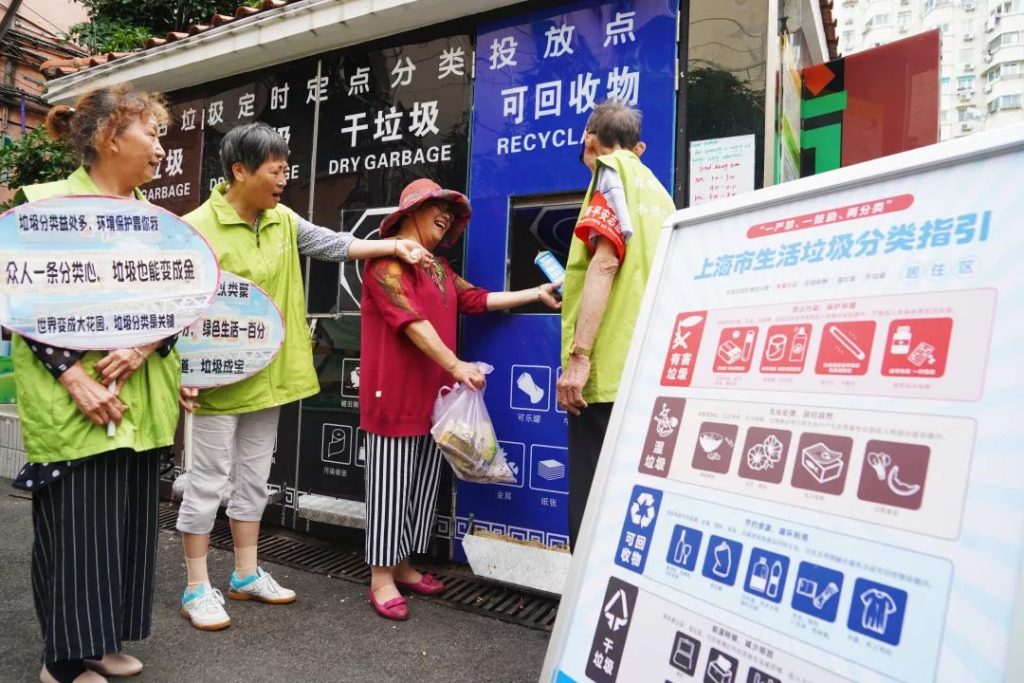 The Chinese government aims to increase recycling rates to 35 percent for residences by 2020; they’re building basic trash sortation systems and starting to charge waste management fees for both residential and commercial waste for 46 major cities by the end of 2020. They’re also expanding their trash classification system to all cities by 2025.

Shanghai is one of the first cities to start responding to the policies from the central government. Twenty-three million people must learn to sort their trash according to four labels — recyclables, dangerous goods, kitchen waste and other waste — under a mandatory sorting scheme starting July 1. Misclassification will result in a fine of up to $30 for individuals, $7,200 for commercial entities and $70,000 for recyclers (and the potential revoking of their licenses). How to sort trash correctly is not just in the news, it’s the talk of the town and it’s even included in exam questions for schools.

For individuals who fail to sort their trash, their social credit rating, which not only determines their mortgage rate and insurance premium, but also their eligibility to purchase flight tickets and even send their kids to public schools, will be lowered.

Unsurprisingly, these new developments in recycling bring challenges, particularly around education and infrastructure. The Shanghai government has hired 1,700 instructors, conducted 13,000 training sessions, and created an app to handle inquiries to help citizens meet the requirements.

Trash classification is related to the people’s living environment and the economical use of resources. It is also an important embodiment of the level of civic-mindedness.

Meanwhile, the policy highlights the current lack of infrastructure for this kind of scheme. There needs to be significant investment from both the public sector and private sector to sufficiently grow the collection and sortation capabilities of the country. This especially applies to rural regions, which constitute a large proportion of China and lack the necessary infrastructure to deal with trash, especially tricky waste such as fertilizers and pesticides.

Yet all of these shifts have culminated in, and created, a significant business opportunity. Recycling needs investment now. China’s planned economy means that every five years, the central government will create an economic development plan for the country for the next five years. Key sectors that are targeted in the five-year plan will receive support, from specific policies to financial subsidies, that attract significant interest from the private sector. The recent emphasis on the recycling sector is a good example of this and, importantly, sends a positive signal to the market.

The business opportunity is vast and growing

At Closed Loop Partners, we know that keeping valuable commodities circulating in supply chains is good business. The current developments in China are spurring interest, excitement and investment in the space, which will continue to grow. There is room for both startups and bigger companies, domestic as well as foreign players, traditional players in the recycling industry and new players from other sectors such as tech, marketing or consumer goods companies, all of whom are ready to innovate and embrace the change. We’re seeing a new structure of supply and demand around recyclables worldwide. Shanghai is just the beginning; more cities and business opportunities will arise in the coming years as a result of the combination of favorable factors:

The article was reprinted with permission from the Closed Loop Partners blog.

See all by Chris Cui