5 reasons optimism is the key ingredient for the Climate Summit

Several months ago U.K. economist Andrew Simms wrote an entertaining article on seven good reasons to be an ‘apocaloptimist’. Simms’ basic point was that although the impacts of future climate change looked increasingly severe given the current lack of ambition, there were also tremendous opportunities to be seized that could still deal with the challenge.

This sense of optimism in the face of the real and urgent danger presented by climate change is what this week’s Climate Summit in New York must be framed around and deliver.

For the political, business and civil society leaders heading for the conference, there simply is no longer any excuse for portraying climate change as too hard, too costly, or too distant to tackle.

While the IPCC’s latest assessment report has underlined the sober reality and urgency of action, an accumulating body of evidence from financial analysts, investors, government thinktanks and economists demonstrate that we stand on the edge of profound and positive technological and economic change, which leaders - in government and business - can help accelerate.

For those yet to be convinced by a glass half-full view of the future, especially those leaders attending next week’s summit, the following reading list is recommended:

New Climate Economy Report: Released this week, the ‘NCE’ eloquently and clearly demonstrates that economic growth and ambitious climate action fundamentally go hand-in-hand, rebutting once and for all the canard that economic prosperity and environmental health are somehow mutually exclusive. This major report - a year in the making - was overseen by some of the world’s leading economists, businessmen and political figures including Lord Nicholas Stern, Unilever’s Paul Polman and former Mexican president Felipe Calderon.

Toil for Oil: Also released this week, the Toil for Oil report from financial analysts Kepler and Chevereux explains how the declining cost of renewables and the growing stringency of climate and energy policies will strand many of the high carbon assets of the world’s oil majors in the coming decade or two. The key insight of the report is thatthis will happen under scenarios of both falling AND rising oil prices. The report builds on the excellent analysis from the Carbon Tracker Initiative, which highlighted earlier this year that some US$1.1 trillion of planned oil and gas investment would be worthless if governments moved to implement necessary climate and energy policies over the coming two decades.

US renewables now competitive without subsidies: The latest report from U.S. asset managers Lazard confirmed this week that wind and solar are now competitive with incumbent power sources in the United States without subsidies and stated that this wasan ongoing trend. The Financial Times noted that this raised the prospect of a fundamental shift in the US’ energy market.

UBS, Deutsche Bank, HSBC, CitiGroup say future is renewables: A flurry of reports from some of the world’s leading financial institutions over the last 6-12 months have all concluded that renewables are on the verge of dominating energy markets around the world. UBS, for example, told investors in August that it was “time to join the revolution” as distributed energy, energy storage technologies and electric vehicles converge towards integrated, affordable systems by 2020.Deutsche Bank,CitiGroup and HSBC have all made similar statements around the near-term dominance of renewables for new power generation.

Mainstream economic commentators add their voice: When commentators from normally staid and conservative newspapers start to highlight the beginning of the end for fossil fuels it becomes hard to deny that change is occurring. The international business editor at the U.K.’s Daily Telegraph, for example, reported in August that the oil industry was on “borrowed time” as solar and wind continued their descent down cost curves.

This list is clearly only a snapshot of some of the tremendous clean energy and low carbon shifts that are underway around the world, driven no longer just by the passion of entrepreneurs but increasingly by pure economics and good business sense.

Although news headlines continue to be dominated by the urgency of other political and economic events, it is this quiet but profound revolution that leaders in New York next week need to understand and embrace. By recognizing the tremendous opportunities in front of us we don’t need to be apocaloptimists to act, just simply optimists. 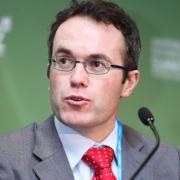 See all by Damian Ryan