The first of week of the 25th annual United Nations conference on climate change is officially over and the second week has just begun.

Last week, as the start of COP25 drew near, former U.S. Secretary of State John Kerry announced the launch of World War Zero, a bipartisan initiative he is spearheading. The initiative’s goal “is to hold more than 10 million ‘climate conversations’ in the coming year with Americans across the political spectrum,” according to the New York Times.

Its founding membership includes a diverse range of politicians from former Ohio Republican Governor John Kasich to Hollywood A-listers like Leonardo DiCaprio and everyone in between. But the World War Zero website has a call for people and businesses alike to “join the movement to achieve net zero carbon emissions and create millions of new jobs in the process.”

“It's totally collaborative. We want people to get involved at the local level,” Kerry told independent journalist Emily Atkin in her newsletter HEATED. “We want people to be engaged in World War Zero, or it won’t work. Everybody has to be on board.”

As the talks began, associates at World Resources Institute laid out what they considered countries’ key tasks at COP25 in Madrid. The priorities include countries stepping up their ambitions and advancing their climate finance and capacity-building capabilities. With another week to go at the climate conference, it is yet to be seen if governments will meet these expectations.

While we wait, here are five other things to know from the first week of COP 25.

1. Last Thursday, the Science Based Targets initiative released a report that assessed its impacts and the progress made since its launch.

The report notes that since the initiative started in June 2015 through Oct. 31, 686 companies have publicly joined the SBTi. Of those companies, 285 of them have targets that SBTi has officially approved. The report says that the continued adoption of science-based targets has the potential to mobilize “transformative, systemic change.” 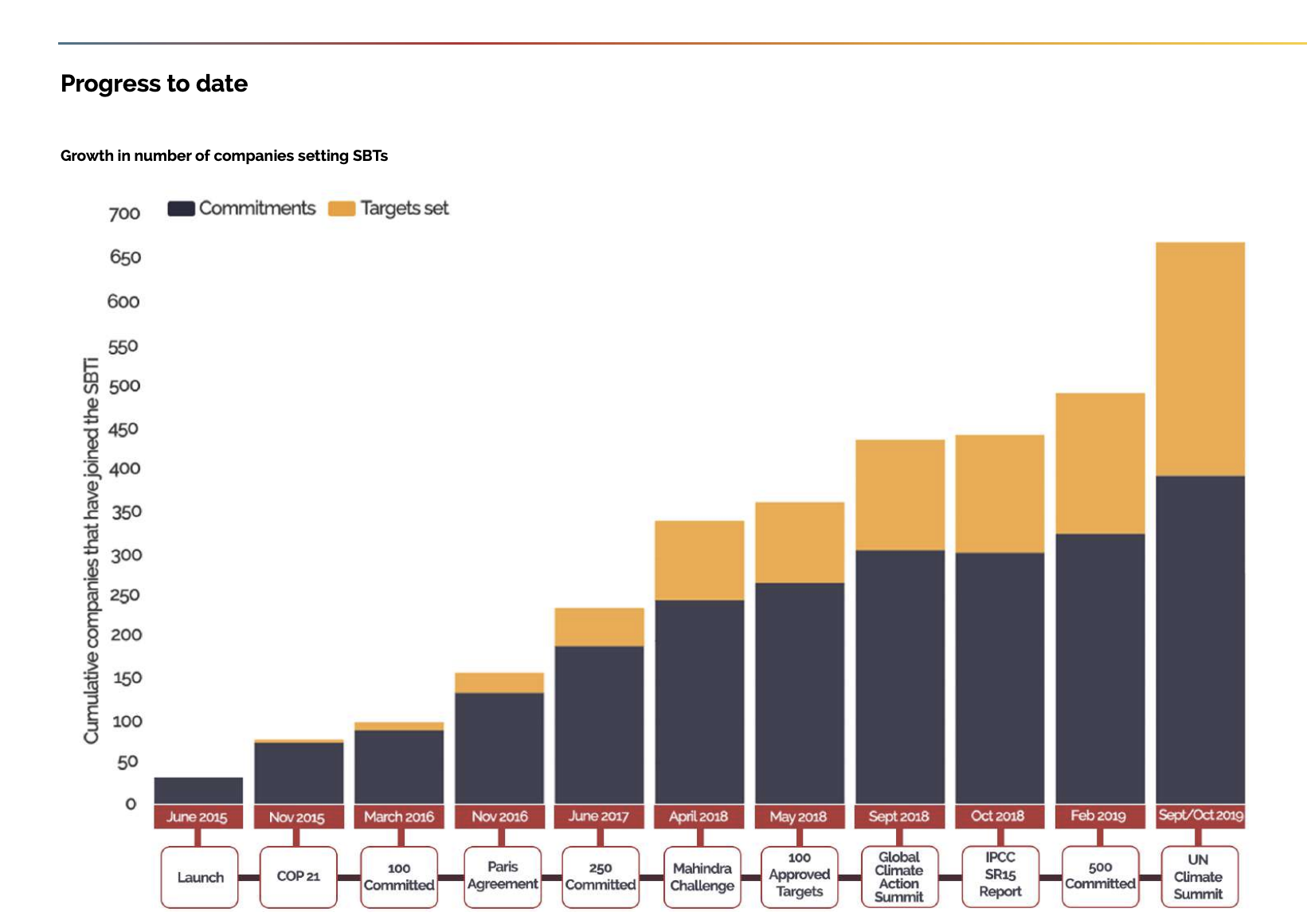 The process to achieving that change would include “driving innovation and deployment of low-carbon solutions through high ambition targets,” “cascading ambition through the economy with SBTs for companies’ value chains,” and “shifting investment flows to support the transition to a net-zero economy by providing banks and investors with a framework to align their portfolios with,” among other strategies.

Additionally, the report takes a look at where progress is uneven and where additional efforts are needed. For example, adoption of science-based targets in high-polluting sectors like cement, steel, chemicals and automotive is moving slowly.

2. Labor unions and companies band together to release the United for the Paris Agreement statement.

Chief executives from 75 companies across many sectors of the U.S. economy and union leaders from the AFL-CIO, which represents 12.5 million workers, released a joint statement in support of the U.S. remaining in the Paris Climate Agreement. Additionally, the statement acknowledges that staying in the agreement will require a just transition of the workforce.

“Staying in the Paris Agreement will strengthen our competitiveness in global markets, positioning the United States to lead the deployment of new technologies that support the transition, provide for our workers and communities, and create jobs and companies built to last,” the group writes in the statement, that was released on Monday, Dec. 2, the first day of COP25.

3. Exactly a week after the United for the Paris statement, a group of investors released a similar statement, urging world governments to step up ambitions to address the climate crisis.

The investors released the statement, which was developed by the seven Founding Partners of The Investor Agenda. They include the Environment Agency Pension Fund and BNP Paribas Asset Management, among others, who are calling on governments “to phase out thermal coal power, put a meaningful price on carbon pollution, end subsidies for fossil fuels, and strengthen nationally-determined contributions to achieve the goals of the Paris Agreement.”

The new report shows that increase was largely driven by offsets associated with projects that reduce emissions by improving the management of forests, farms and fields. For example, the volume of transactions in the forestry and land use sector, grew 264 percent between 2016 and 2018 while volume in all other offset types — renewable energy, waste disposal and transportation, to name a few — grew by just 21 percent. 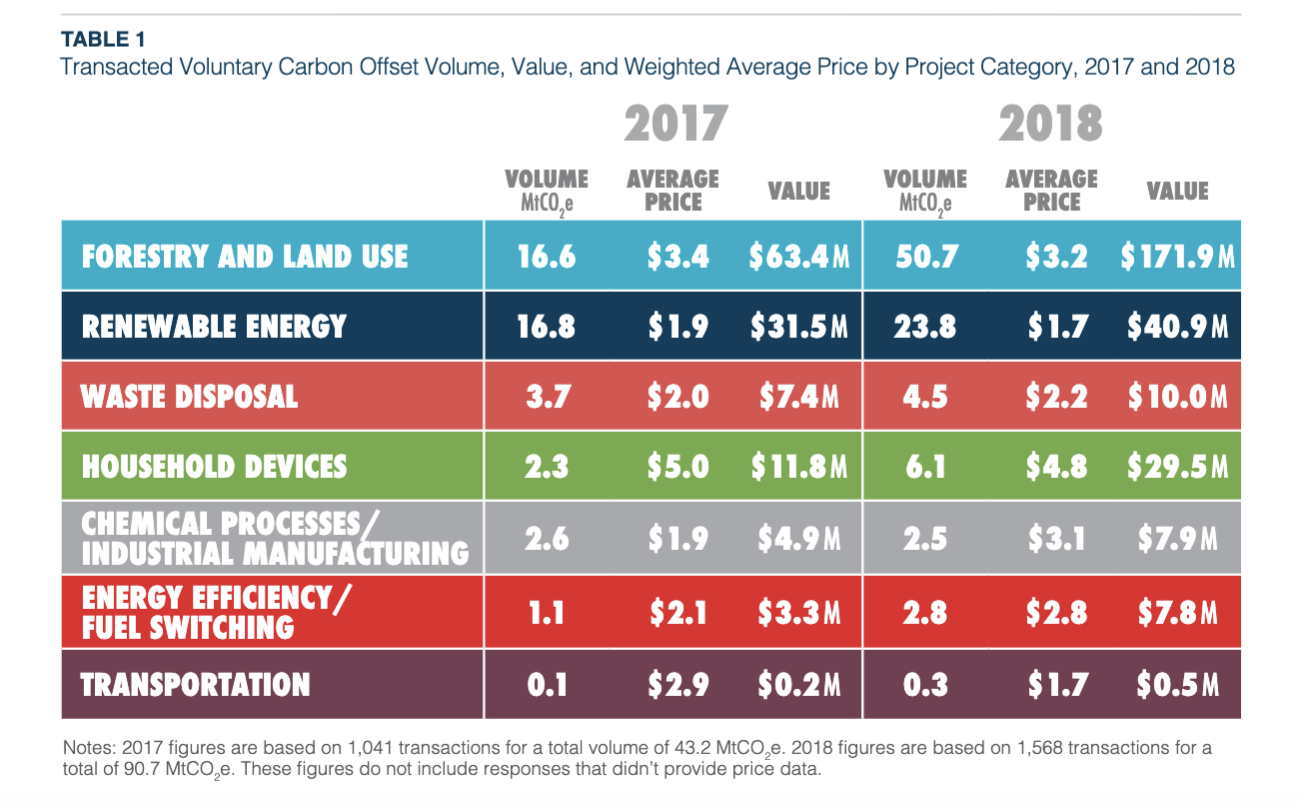 “Together we are using the power of markets and private sector value chains to create a better future. Nature — particularly forests — is an important part of accomplishing the goals of the Paris Agreement and stabilizing a changing climate. If ever there was a time for trees, now is that time,” said Dan Lambe, president of the Arbor Day Foundation, a Forest Trends partner organization, in a statement.

5. Insurers in Europe are leaving coal in the dust — not so much in the U.S. and Asia, according to the third annual scorecard from the Unfriend Coal campaign.

"The role of insurers is to manage society’s risks. It is their duty and in their own interest to help avoid climate breakdown. The industry’s retreat from coal is gathering pace as public pressure on the fossil fuel industry and its supporters grows,” said Peter Bosshard, coordinator of the Unfriend Coal campaign and author of the report, said in a statement.

During a talk in Madrid on Friday, youth climate activist Greta Thunberg said, "We have been striking for over a year, and basically nothing has happened," according to CNN. "The climate crisis is still being ignored by those in power, and we cannot go on like this."

"The COP25 is not something we should just look past and ignore. Because every chance we get to improve the situation we must take," Thunberg continued, ahead of a planned Friday march.

As week two of COP25 begins, GreenBiz plans to continue keeping tabs on which countries, companies and people are saying and doing about their commitments to address the climate emergency.

What will it take for 2021 to be a groundbreaking year for circular fashion?

Waste: an environmental justice issue we should be talking about

VF Corp leans in to the circular economy and regenerative ag

Is your environmentalism intersectional? It should be