Today, more than 275 brands, retailers, recyclers, governments and NGOs are announcing a shared vision to close the loop on plastic pollution.

In a first-of-its-kind collaboration, the signatories to the New Plastics Economy Global Commitment — collectively responsible for producing 20 percent of all plastic packaging globally and represent the full value chain for plastics — have pledged to eradicate plastic waste and pollution. The scale, scope and shared approach of today’s announcement, made at the Our Oceans conference in Bali, makes it one of the most significant actions around plastic pollution to date.

The commitment, launched with the social media hashtag #LineInTheSand, is being led by the Ellen MacArthur Foundation in collaboration with U.N. Environment. While many signatories had set individual goals prior to today’s announcement, this represents a far broader scale and scope of commitments to meaningfully tackle plastic pollution.

Signatories of the commitment are formally endorsing the Ellen MacArthur Foundation’s framework of a circular economy for plastics, which centers on ensuring that plastics never become waste. That vision is defined by six key points:

This isn’t the first cross-cutting agreement on plastics. Today’s commitment builds on and reinforces the G7 Plastics Charter, signed earlier this year; the EU Strategy for Plastics in a Circular Economy; the Commonwealth Blue Charter, agreed to in April by leaders of the Commonwealth countries; and the Community of Ocean Action established by the United Nations last November. It also will aim to contribute to the implementation of the U.N. Environment’s 2016 resolutions on marine litter and microplastics, and several Sustainable Development Goals, including SDG 12 (on sustainable consumption and production) and 14 (on conserving and sustainably using the oceans).

This is the biggest effort ever seen to mobilize a global-scale industrial response, uniting the key actors around the globe behind a common vision for upstream solutions.

Suffice to say, it’s been a busy couple of years for tackling the plastics problem.

"This is the biggest effort ever seen to mobilize a global-scale industrial response, uniting the key actors around the globe behind a common vision for upstream solutions, addressing this pressing issue at its root cause," said Ellen MacArthur, in a letter to prospective signatories in August.

Here are five things to know about today’s announcement:

1. It creates alignment. Plastic pollution has received global attention, particularly over the past year, with increased consumer awareness, organizational advocacy, corporate engagement and regulatory movement, but these independent actions have not all set the same vision of success, and many existing precompetitive collaborations and partnerships around plastics represent commitments to effort rather than action. Today’s commitment puts all of these players on the same page and aiming in the same direction.

2. It requires tangible commitment. In addition to endorsing the New Plastics Economy vision, signatories have set individual targets within the commitment, varying in ambition and scope. The shared commitments will become more ambitious with time. According to Sander Defruyt, who leads the New Plastics Economy Initiative at the Ellen MacArthur Foundation, "We will continue to review the ambition level of the commitment and, over time, raise it, and we also call for many more businesses and governments around the world to join this effort so that we also continue to scale up in numbers of companies and governments involved." Defruyt says the foundation will review its targets every 18 months. 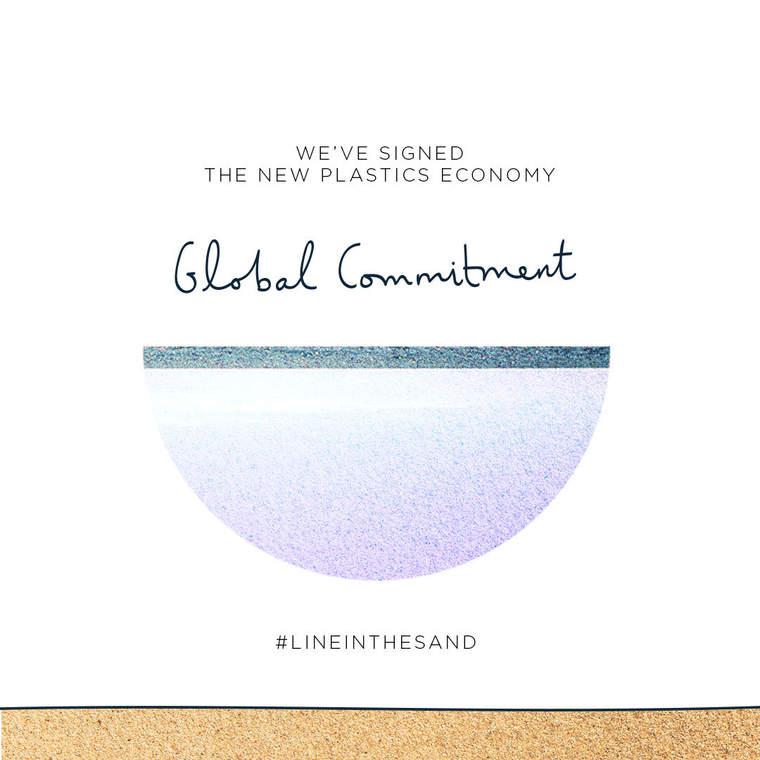 Ellen MacArthur Foundation
Specific targets will vary based on the type of signatory (company, NGO, city, financial institution, recycler, etc.) and geography. For example, SC Johnson, the United States-based manufacturer of such household brands as Windex, Raid and Ziploc, has committed to tripling the amount of post-consumer recycled plastic in its packaging (it currently uses about 20 percent post-consumer plastic in its bottles in North America and Europe); expanding its concentrated refill product offerings (think: refilling your Windex bottle from a concentrate and adding water); championing curbside recycling of flexible plastic film; and working towards 100 percent recyclability, reusability or compostability in plastic packaging and removing excess plastics wherever possible — all by 2025.

3. It builds on existing momentum. As noted, global momentum to tackle plastic pollution steadily has grown over the last couple of years, and tangible commitments and meaningful progress recently have been picking up speed.

U.N. Environment, which leads the Global Partnership on Marine Litter and its Clean Seas campaign, also launched the Global Plastics Platform last month to support countries’ efforts to tackle plastic pollution. It said it would use its convening power to drive engagement with global commitment signatories.

For many companies, signing on to the commitment is an extension of existing initiatives. "It has been very natural for us to sign on because it’s something that we’ve been working on for a long time," Fisk Johnson, CEO of SC Johnson & Son, told me. "Our single greatest environmental issue is the amount of plastic that we produce with our products that go into the waste stream. That’s something that we’ve recognized for a long time."

4. It requires transparency. All signatories will be required to publish annual data on their progress in order to ensure alignment and help drive momentum within the initiative. "Transparency is one of the key mechanisms for accountability," said Defruyt. No doubt stakeholders will be watching closely companies’ progress, or lack thereof, especially by leading brands.

5. It’s still only a beginning. While the New Plastics Economy Global Commitment represents the largest unified approach to tackling plastic pollution, it’s not a silver bullet. "It’s one thing to say that 100 percent of our products are either reusable, recyclable or compostable. But it’s a whole other challenge to really close the recycling loop and get people to reuse products," said Johnson.

Meeting the commitments will require customer buy-in, and possibly changes in consumer habits, always a delicate dance. At the end of the day, consumers — at least in the United States — seem to want what they want.  As Johnson explained, "Our trigger bottles can be reused many, many times, but people just don’t want to go through the inconvenience of having to [refill bottles]. They still prefer buying the full bottle and throwing the full bottle away. I would love to figure out a way to crack the code on that. That would be huge."

The Ellen MacArthur Foundation acknowledges the role of consumers in curbing plastic pollution. "It’s really up to businesses and governments to put those systems in place," says Defruyt, “and then individuals or households can act within the system that is available. As long as the system is not there, there’s not much individuals can do."

Tackling plastic pollution at scale also will require other levers. The Ellen MacArthur Foundation will continue to establish Plastics Pacts — national-level collaborations among businesses, governments, innovators, NGOs and citizens — to drive implementation in its local context. The first was established in the United Kingdom earlier this year, with an impressive lineup of participants from across the value chain.

The global commitment offers a promising vision for eliminating plastic waste and transforming an aspirational circular economy for plastics into a functioning, closed-loop system. But while the hundreds of signatories represent producers and consumers of a fifth of the plastics market, it will require participation by the other 80 percent to truly turn the tide on plastic pollution.

Strategies for managing plastics will be front and center on the agenda at GreenBiz 19 in Phoenix, from Feb. 26 - 28.

Is the global quest to end plastic waste a circular firing squad?

Success in sustainability combines these 3 ingredients