Back in March, the Bureau of Labor Statistics (BLS) was ordered to cut its budget 5 percent by Sept. 30 as part of sequestration.

As that deadline looms, it's worthwhile to look back at one of its casualties: the Green Technologies and Practices (GTP) program. The survey of green tech business use was eliminated, but not before it provided a snapshot of how businesses adopted goods and services that can reduce negative impacts on the environment.

As we know, people and organizations choose many paths to green. Some do it because it's the right thing to do, while others take action because it makes business sense. While few may acknowledge it, many are influenced to adopt a green technology or practice because others in their personal and business circles do. It's part of the magic of social capital.

Wouldn't it be nice to know what regions, sectors or occupations have a higher proportion of GTP adoption? Presumably we could better target our own efforts to sell a green widget or service if we knew where the green hotspots were, then build atop the social networks and community attitudes indicated by higher GTP adoption.

The BLS developed the GTP survey to answer these questions. A new sort of measurement for them, it surveyed roughly 35,000 U.S. business establishments for the payroll period that included Aug. 12, 2011. The six questions gauged the use of processes with a pro-environmental impact. Most adopted were: 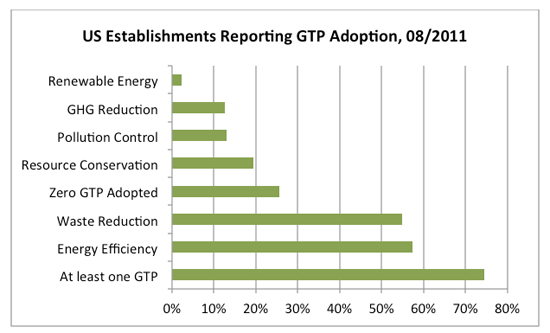 A deeper dive into the data

Overall, 74 percent enterprises reported adopting at least one GTP. The two most widely adopted practices -- energy efficiency and waste reduction -- most likely were adopted by organizations that took on only one GTP. The barriers to entry for these two most popular choices are low. The purchase of an Energy Star device merits a positive response to the energy efficiency question, and reuse of single-side printed paper or recycling packaging materials support a positive response to the waste reduction question.

One can pessimistically think that a random call to any U.S. business would have a 50/50 chance of reaching someone who does nothing (26 percent), or just one thing (25 percent) with green technologies and practices. But the good news is that two-thirds of the 74 percent that reported using at least one GTP actually used two or more (26 percent used two, 15 percent used three and 9 percent used four or more).

Thus, of firms reporting GTP activity, a clear majority of those GTP establishments use more than one.

• The most common GTP pairing included energy efficiency and waste reduction. But about 20 percent of businesses that used either of these GTPs used no other type. This suggests an opportunity for programs that promote an underlying conservation ethic supporting both rather than a focus on one GTP.

• Adoption of onsite renewable energy was the least reported item; these renewable energy adopters were more likely to report GHG reduction or pollution control. This raises a question about the size of firms choosing activity in these less likely GTP practices.

• Different sectors of the economy, as described by two-digit NAICS codes, behaved much differently. The mining, quarrying and oil and gas extraction sector was -- by a big margin -- the one with the lowest adoption of GTPs. It was alone in reporting none as its most popular GTP adoption selection. Transportation and warehousing was also well below the average rate of GTP adoption, while the sectors of information and of educational services were leading adopters. If one seeks a challenging audience that offers "a great opportunity," one could try the low-adopting sectors.

• The agriculture, forestry, fishing and hunting sector has high GTP adoption, with the third-highest adoption rate. It was unique among all sectors due to its first choice preference for resource conservation.

• The occupational groups with the highest percentage of workers spending more than half their time involved with GTP adoption were building and grounds cleaning and maintenance; installation, maintenance and repair; and construction and extraction. 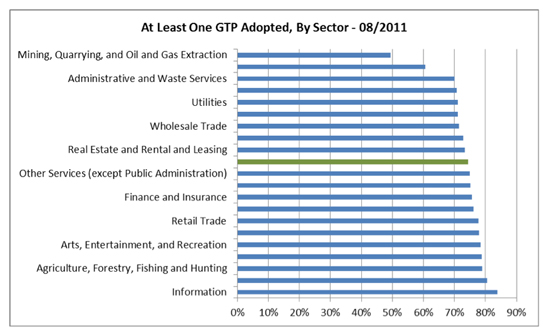 The EPA and the University of Nebraska at Omaha College of Business Administration jointly funded additional data review atop the results (PDF) published last year by the BLS. Christopher Decker's review of the GTP survey results and other datasets attempted to find identifiable county level attributes that are correlated with high GTP adoption in our region, including counties in Iowa, Kansas, Missouri, Nebraska, Colorado, Illinois and South Dakota.

One might expect higher GTP adoption in counties with higher education or income levels, lower transient worker population or different political leanings. But we found no effect.

What we did find was an indication that two attributes correlate with higher adoption of GTP strategies overall. One was the U.S. Census description known as a Micropolitan Statistical Area. The second attribute related to environmental group membership densities. 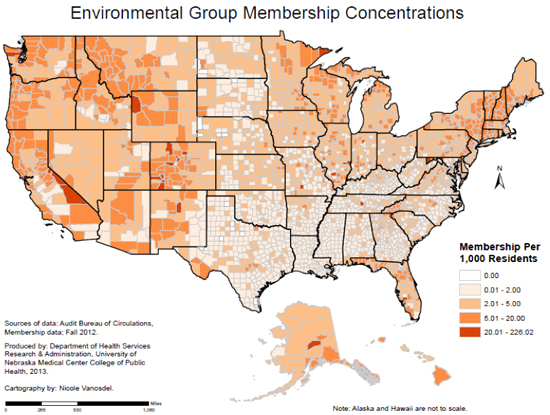 The relationship between county-level membership density and GTP activity levels still needs to be better defined, but a positive correlation exists. We see more GTP activity in those areas where environmental group membership has higher concentrations.

Technical assistance programs can use this GTP data to identify and aid businesses for whom lack of information is an impediment to source reduction. We suggest technical assistance providers target promotion of waste reduction, energy efficiency and resource conservation initiatives in micropolitan areas with high densities of environmental group memberships.

GTP adoption appears to occur at a greater rate in these counties. Therefore, oft-used tactics demonstrating engagement to spur action, such as awards or social events, provide credibility by increasing visibility of the social norm exhibited by nearby adopters. New users of specific GTPs also have greater likelihood of access to informal support from other GTP adopters in such counties.

The study of GTP adoption by evaluating correlating county level indicators is worth further work that UNO already has begun. While this is hardly Big Data analysis, the insights gained can be of immediate use to technical assistance providers who promote GTP adoption, moving them towards a more data-driven program.

US map image by Lasse Kristensen via Shutterstock. 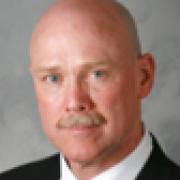 See all by Richard Yoder