America's nearly 3,300 electric utilities increasingly are being portrayed as if they are on the proverbial Titanic, futilely rearranging the deck chairs of an ill-fated industry doomed to disappear beneath the powerful waves of 21st century innovation.

As "disruptive challenges" (PDF) gain steam with insurgent energy efficiency, grid management and alternative supply solutions, kilowatt-hour sales will take a dangerous dive, profitability will plunge, and one after another, traditional electric companies will succumb to the frigid and fatal waters of the ominous, impending "utility death spiral."

Customers, meanwhile, awakened to the much-improved "economics of grid defection" through battery-backed solar electric systems, will jump ship in mutinous masses and sail away to the warm shores of blissful renewable energy autonomy.

But if the $370 billion-a-year U.S. electric utility sector truly is on the brink of disaster, then it is very strange indeed to see numerous utilities already deeply engaged with some of the very forces that someday could be their undoing. Here are six innovators defying doomsday prophets.

Through the success of its energy efficiency programs, which include cash rebates and low-interest loans, the municipal utility completed its first "energy conservation plant" in 2006 by offsetting 700 megawatts of traditional generation. Now, the public utility is halfway to offsetting 800 more megawatts of conventional capacity.

Austin Energy also recently set the bar for low-priced utility-scale solar in the U.S. by signing a 25-year agreement with SunEdison for power from a pair of large-scale West Texas photovoltaic (PV) plants — totaling 150 megawatts — at a price between $45 and $55 per megawatt-hour. That beat Austin Energy's current 30-year levelized cost estimate for new combined-cycle natural gas generation at about $70 per megawatt-hour and just over $100 a megawatt-hour for new coal generation.

The utility initially wanted only a 50 MW project. "We ended up with 150 megawatts because of the attractive nature of it," said Austin Energy General Manager Larry Weiss during a public meeting in March.

As of last week, the businesses are part of Buffett's newly named holding company Berkshire Hathaway Energy — which ranks as the No. 2 wind utility in the United States. Berkshire Hathaway Energy's utilities had more than 4,420 megawatts of wind energy on their grids entering 2014. This includes more than 3,000 megawatts under direct ownership, which leads all U.S. utilities, according to a recent ranking by the American Wind Energy Association (AWEA).

The company has 1,300 megawatts of solar power in operation or under construction in Arizona and California through wholesale power subsidiary MidAmerican Renewables.

On the regulated side of its business, NV Energy, which Berkshire Hathaway acquired in 2013, just filed a plan with Nevada energy commissioners to replace 812 megawatts of coal-fired generation over the next six years with a combination of natural gas, solar and other renewables.

Advocacy group Vote Solar recently named Green Mountain Power its "2014 Solar Champion." This is because the investor-owned utility endorsed an expansion of net-energy metering services for solar-powered homes and businesses in Vermont at the full retail electricity rate.

With this support, a bill was signed into law last month that raised the state's cap on net metering to 15 percent of a utility's peak load, from just 4 percent previously.

Green Mountain Power's support of net metering stands in stark contrast to investor-owned utilities in states such as Arizona, California and Colorado — as well as utility trade group Edison Electric Institute (EEI) — which argue that by receiving payment for solar electricity fed into the grid at the full retail rate, solar-powered customers are being heavily cross-subsidized by non-solar customers.

In supporting expanded net metering in Vermont, the state's largest utility and a member of EEI, however, agreed with a 2013 report (PDF) commissioned by Vermont energy regulators which found that net-metered systems "do not impose a significant net cost to ratepayers who are not net metering participants." 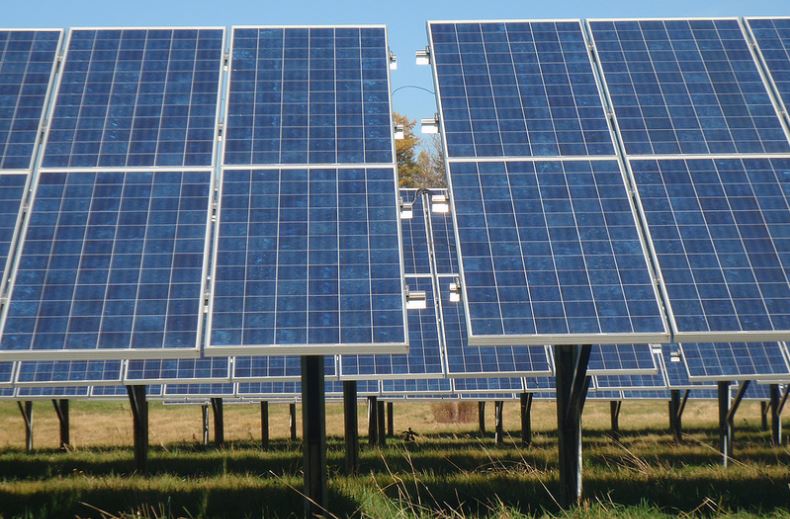 The Fortune 500 company's retail suppliers — which include Reliant, Green Mountain Energy, Cirro Energy, Energy Plus and NRG Residential Solutions — provide electricity to about 3 million customers throughout the country.

While the full report isn't scheduled for release until June, SEPA published a ranking last week showing that PG&E easily led all U.S. utilities once again by adding 1,471 megawatts of solar in 2013. A year before, PG&E led the pack with 806 megawatts of additional solar.

Now, with more than 3,040 megawatts of cumulative solar capacity connected to the grid, PG&E has more than twice as much solar as the No. 2 ranked utility in the country, Southern California Edison.

PG&E, which also ranks fourth nationwide in wind energy with 2,040 megawatts, serves about 20 percent of its retail electricity sales with renewable power — not including large-scale hydroelectric dams.

Entering 2014, Minnesota-based investor-owned utility Xcel Energy led all U.S. utilities with a total of 5,080 megawatts of wind energy capacity on its system, according to AWEA's ranking.

In Colorado, where Xcel operates through subsidiary Public Service Company of Colorado, the company received permission earlier this year from state regulators to acquire 170 megawatts of new large-scale PV at two sites.

Last month, Xcel proposed a new 50 megawatt demonstration program to allow residential, commercial, industrial or public sector retail customers to buy blocks of solar power from another large-scale facility for a premium on their monthly electricity bills. The proposal targets Coloradoans who rent apartments or live in condos, as well as homeowners and business owners whose rooftops are not well suited for on-site solar because of limited space, shading and other factors.

On the other hand, Xcel is among the most aggressive utilities in the country in the battle over rooftop solar incentives — namely net metering — that it views as being hugely overvalued at the retail rate.

But rather than being defensive over the threat of distributed energy, a new report from Ernst & Young asserts that utilities should "go on the offensive and lead the revolution."

By innovating and accelerating new business models that add customer value as well as shareholder value, as advocated in the report, utilities can go well beyond rearranging the deck chairs of the titanic U.S. electric utility industry.

They may even be capable of building an entirely new vessel — one strong enough to cruise through the tricky passageways and turbulent waters of the 21st century and beyond.

Utilities photo by muratart via Shutterstock.