"We were forced to work around the clock. We never saw land. They beat us. Whipped us. The company hunted us day and night," intone Burmese workers in "Ghost Fleet," a Vulcan Inc documentary about slavery on fishing vessels.

The Ghost Fleet clip opened the GreenBiz20 workshop "Putting People First: How to be a Force for Good in Your Labor Practices," because moderator Jack Kittinger, senior director of practice at Conservation International and a professor at Arizona State University, said he wanted to put a face to the mind-numbing numbers — 40 million people in modern slavery today, 16 million of them in the private sector.

Eradicating forced labor, a persistent scourge throughout human history, has no easy answers and requires collaboration across companies, NGOs, government and other partners.

"It’s our collective responsibility to make sure that these occurrences are brief, rare and nonrecurrent," Kittinger said. "It’s about putting safeguards in place to lower risk to the lowest level possible, and having access to remedy when abuses happens."

Here are six takeaways from the workshop about how companies can do that.

1. Acknowledge the problem and your role in it

Helen Crowley, head of sustainable sourcing innovation at the luxury apparel brand Kering (on sabbatical as a fellow at Conservation International), said that a pivotal moment for her was hearing Hannah Jones, founder and president at Nike Valiant Labs, speak about the brokenness of supply chains. The first step in finding solutions, Crowley said, is to "accept that supply chains are broken, accept that this is not the best way of doing things, this power structure we’ve created on financial margins."

Miguel Zamora, director of markets transformation at Rainforest Alliance, agreed: "What doesn’t work is when people say, ‘It’s not a problem, move on, we don’t want to talk about it.’ The problem gets bigger and it affects everyone else. When companies get together and realize there’s a problem here … we see more action getting closer to success."

It’s about putting safeguards in place to lower risk to the lowest level possible, and having access to remedy when abuses happens.

Taking it a step further, Roxanne Nanninga, director of sustainability at Thai Union, said admitting your organization is part of the problem and needs to be part of the solution is important for companies, but the government needs to take part in the solution as well.

In Thailand, a lot of progress has been made because the Thai government’s response, she said, in large part due to international pressure.

Once you’ve acknowledged the problem, there are 12 steps to take, quipped Crowley, who then boiled down Kering’s approach to three fundamental actions: mapping supply chains; setting standards and communicating them to suppliers; and incentivizing good behavior.

"Nothing replaces mapping your supply chain," stressed Crowley, who oversees sourcing of 15 to 20 raw materials from cotton to artisanal gold. "You have to know where your stuff comes from. That’s how you set priorities."

Second, Kering focuses on "creating a relationship with the producers or the people right next to the producers, the ginners and spinners, [and communicating] the standards we expect and want to encourage," she said. 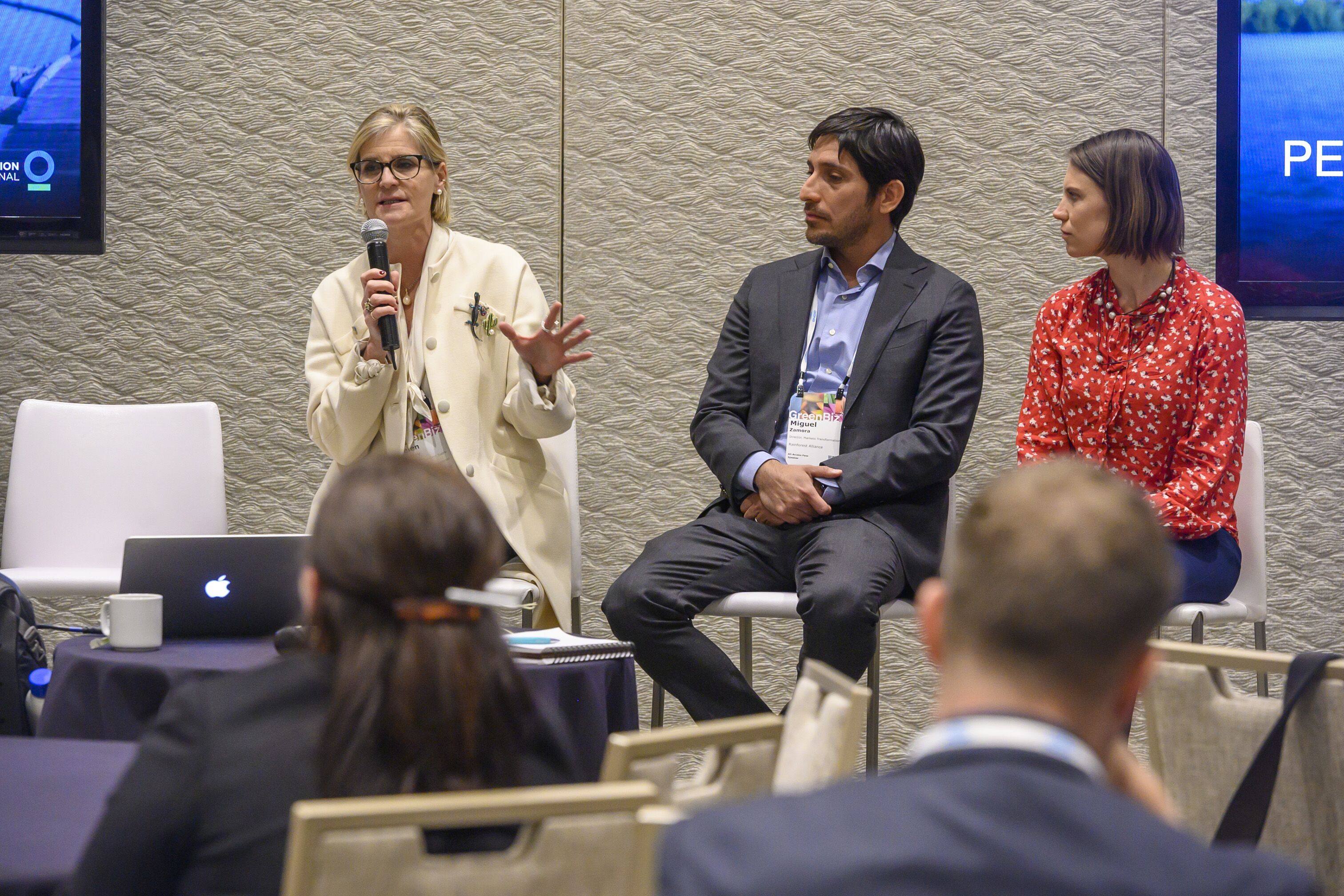 Kering starts with certification schemes, such as the Fairtrade cotton certification and the Alliance for Responsible Mining standard for artisanally produced gold, and adds its own internal standards on top.

"We try to be collaborative with our suppliers," she said, "[and tell them] …This is what we currently require from you, and here’s where we’re going. We communicate that we want continuous improvement and are not walking away when there’s a problem."

Last, financial incentives to reward good behavior are key for Kering, even if it can’t offer direct payment. Crowley said she tries to create projects that align with communities’ needs and feels the company has been successful with its cashmere and artisanal gold supply chains but has more work to do with cotton, especially in China.

While these steps may seem fundamental, many companies still aren’t taking them, Kittinger said in a later interview.

Like Kering, Thai Union takes a collaborative approach to working with suppliers to address violations it finds through its vessel auditing program. "It’s not meant to be a punitive program," Nanninga said.

"We recognize that where there are issues, you can’t just stop sourcing from them in a lot of cases because they’ll sell to somebody else and workers will remain enslaved. So how do you engage with them, and keep an open relationship where you can actually change an attitude, change behavior?"

To date, Thai Union has audited 100 vessels around the world, according to Nanninga, and it focuses on interviewing workers on ships, rather than reviewing paper policies. Companies initially balked because they didn’t want their workers interviewed, Nanninga said. But "once they see it’s an open dialogue and meant to help," their attitudes slowly shift.

Kittinger queried where companies draw the line on fixing versus avoiding abuses. He recounted the story of a colleague who stumbled onto a dangerous, illegal fishing operation in Indonesia, and chose not to engage for safety reasons. Two years later the operation was broken up. "Sometimes it’s not right for driving improvement. It just needs to end," he said.

You have a moral perimeter you’ve created around your family or your employees or your company. Why aren’t we expanding that into our supply chain?

Zamora said that when the Rainforest Alliance detects abuses, "It doesn’t help to expel a farm from certification. We need to work with workers … to give them the right resources so they can get out the situation."

But he added, "If that farm really wants to make a commitment to change, maybe we give it a chance with very strict [reforms], but they need to show how they’ve changed… If that doesn’t happen, it can’t continue."

"While it’s ideal that you stay in and fix the system," it’s not always possible, Crowley said, citing the UK Modern Slavery Act  "If you sign up to commit to making sure you don’t have bad practices in your supply chain, when you find it, it is hard to stay."

Workshop participant Greta Matos, head of business development, research and development at Wider, a supply chain auditor, spoke to the importance of brands having remediation policies in place when human rights abuses are found by auditors. "The audit is a terrible place to find forced labor," she said. "Very often the brands and retailers are ill-equipped to deal with it properly in a way that keeps people safe."

Matos said she "never felt more helpless" than the moment she was working in a Moroccan strawberry field and discovered that about 70 percent of the women were in a forced labor situation, and that the brand that hired her had no remediation policy or procedure for forced labor. "That meant that as soon as I put it in the audit report, they’d leave that supplier and all of those women … would continue to live in that reality."

"It’s very difficult sometimes to figure out how you provide a voice or outlet for people so they don’t get stuck in those forced labor scenarios," agreed Nanninga, who said that Thai Union has focused on ethical recruitment and programs that give workers voice.

Thai Union factories provide anonymous hotlines for workers, and at sea it has piloted satellite communications that provide workers with a phone app to communicate back to their families. "It’s a pilot, very expensive, but it showed you could make a huge difference if you gave workers the opportunity to talk with people on shore," Nanninga said.

For ethical recruitment, Thai Union representatives go into communities and recruit workers, so that it doesn’t rely only on agents, who often prey on refugees and migrant labor and hire them under false conditions. Its ethical recruitment program has been lauded as landmark by independent evaluators, but thus far it only extends to its factories.

"You have a moral perimeter you’ve created around your family or your employees or your company," Crowley said. "Why aren’t we expanding that into our supply chain, to all of those people that are supporting us in our business?"

"It’s very upsetting to me in the apparel sector that we still haven’t figured out a living wage. It’s complicated, yes, but it’s also a prioritization. There has to be a deep willingness and commitment."

Building on the concept of moral perimeter, Kittinger said, "It’s that first set of hands that touches whatever we’re consuming that are the most vulnerable and least protected."

I think the whole question about, ‘Do we really know where that comes from?’ is going to be moot in the next three to five years.

Coining the term "first mile," Kittinger said that the moral perimeter needs to stretch to workers in that first mile, to the workers who are harvesting the fish, picking the coffee or cotton, or mining the cobalt for our cell phones. "It’s where we’ve seen a lot of egregious practices." Many workers in the first mile are migrant laborers or refugees.

6. Keep boots on the ground

"I think the whole question about, ‘Do we really know where that comes from?’ is going to be moot in the next three to five years," predicted Crowley, citing the Trase initiative and its ability to use third-party data, such as bills of lading to trace where things are coming from.

Kittinger agrees that technology will be transformative. "We’re going to continue to see radical transparency become more the norm," he said in a later interview.

He cautioned that blockchain, which some tout as a solution to transparency on human rights, doesn’t solve the problem of where the information gets generated in the first place. He worries that the blockchain pilots being created under optimal conditions could be undermined by less scrupulous people taking the system and inputting their "illegal, fraudulent information and passing it off as responsible."

"People are being oversold," said Ceresa more bluntly. "They’re putting their faith in blockchain when it’s not yet built to a degree where it can work. The gap is at the bottom of the supply chain."

Blockchain data, she said, is only good to a degree when you’re 100 percent sure that the people collecting it are being validated by a trusted source. But human rights abuses occur often in unstable regions with little regulation and where bribery is rampant.

While Ceresa believes that blockchain is needed and ultimately will be successful, she said that companies should know that at present, "visibility to the source must done with traditional boots on the ground and observational data collection." Companies employing blockchain should ask who is providing the data and how are they being incentivized to be honest, she said.

More broadly, Kittinger said, "It’s incumbent on you to ensure that all the hands that touch these products, up the supply chain have some set of basic protections in place. It’s not enough to pass it off to your supplier."