A couple years ago, I began to discuss the idea that the end of the internal combustion era finally was in sight, along with the overall rapid decline of a fossil fuel-driven world. I think some folks felt it was a premature pronouncement — yet in more recent days, the prediction has begun to pick up momentum.

Recent climate talks, scandals by Volkswagen and the emergence of ever-more electric vehicle platforms have combined to give further weight to my prediction. To be clear, I think we will see the end of fossil fuels as the predominant fuel source for the world within our lifetime — and the reign of the internal combustion engine has a scant two decades left.

There are several trends to look at:

The electric car has gone from a liability to an asset. I bought my first electric car nearly 20 years ago — the Corbin Sparrow. It was cool looking but spent more time in the garage than on the road — it was bleeding edge and mostly bleeding.

Now I have a Tesla, and apart from being too pricey (the only thing wrong with it), it is without a doubt the best car I have ever experienced in nearly every way possible. It seats seven, has nearly as much storage as a minivan, goes 0-60 mph in under five seconds and is absolutely quiet. It receives upgrades with wireless software downloads and keeps getting better the longer I have it. At a Tesla Super Charger Station, a car can charge to full 260-mile range in 20 minutes for free. I haven’t been to a smelly, polluting gas station in over a year. Once the cost of a Tesla becomes equal in price to a gas engine (only a few years away), it’s game over.

The price of renewable energy has dropped precipitously and improved dramatically. When I designed my first net zero home for a client a decade ago, solar panels were 9 to 11 percent efficient versus 20 percent efficient, and are now about a quarter of the cost per installed watt as they were back then.

Those are impressive gains and I predict similar jumps are ahead. Forget about the difference in batteries for both cars and homes: Tesla’s Powerwall lithium ion batteries are vastly superior to the polluting and inefficient lead-acid and nickel-metal-hydride batteries that were the go-to solution for decades. In the last couple of years, significant progress on battery development has began to open up exciting new possibilities.

Once the cost of a Tesla becomes equal in price to a gas engine (only a few years away), it’s game over.

While too many Americans are still in denial about climate change, the ranks of the ignorant and foolish are quickly diminishing under the undeniable weight of evidence that climate change is both happening at an alarming rate — and definitely caused by human activity. From the papal encyclical to the global COP 21 agreements and the rise of the divestment movement, momentum is finally shifting to act on climate change.

In the end, like too many things, money — not altruism— will result in sudden positive shifts in the world’s energy paradigm. History has been clear on this front in so many ways — when presented with a better paradigm and equal (or even nearly equal) costs, people rapidly and willingly dump the old paradigm for the better.

Once a trend even begins to become inevitable, the market begins to shift, and the underlying infrastructure that has subsidized the current paradigm quickly dissolve and further hastens the change. As quickly as the horse and buggy was replaced by the internal combustion engine automobile, so too will electric cars and renewable energy replace internal combustion engines, coal, diesel and petroleum. We will be leaving (thankfully) a lot of oil in the ground.

Catch Brad Liljequist of International Living Future Institute in person during the "Net Zero Energy: Scaling it to the Mainstream" session at VERGE 16, Sept. 19-22, in Santa Clara, California.

I believe that in less than two decades, internal combustion engines in cars will feel about as relevant as Betamax cassette tapes (for those who remember them), and there will be a rapid and sudden shift in the market after a short (10-15 year) transition period starting about now.

Toyota, Volkswagen, Chevy, Ford — they are all racing to get into the electric car game. Alternative vehicles and micro cars such as the Renault Twizy, electric bikes, better public transportation and self-driving vehicles will further drive a stake into the old ways. Lastly and significantly, changes in driving patterns and more walkable and bikeable cities mean that more people simply will do without a car, which is an even better step. Car ownership is no longer the rite of passage for young Americans that it used to be.

Imagine a world without air pollution, oil spills, strip coal mining and deadly foreign wars propped up by the necessity of a giant military industrial complex.

Solar has reached grid parity in many markets around the world and in a few U.S. markets such as Hawaii and Alaska, and the economics will shift for most of the world within the next decade. Much like electric cars, the result of using solar is infinitely better as an experience — so that once it is equal in price, it’s the end of the road for "conventional" fossil fuels.

Solar City’s business model is proving highly profitable, allowing for solar deployment without upfront capital by building owners in markets where they operate. Payback times are dropping fast, and the price for a net-zero home system is now no larger than the price of a good automobile. There is a lot of work to do to change our grids and utility systems, but I think the transition will be swift and positive. Imagine a world without air pollution, oil spills, strip coal mining and deadly foreign wars propped up by the necessity of a giant military industrial complex. You can see why there were so many efforts for so long to squash and hinder progress in renewables.

The following chart explains my predictions of our rapid change to the new energy paradigm globally.

Between now and 2030, two major changes in technology and a third overarching change in multiple technologies will completely change the energy game.

Other energy predictions include:

What can we all do to hasten the change to this future?

The road to personal divestment

The fossil fuel divestment movement is growing rapidly around the world as institutions and organizations agree to purge their investment assets, including stocks, bonds and investment funds from companies that are directly tied to the fossil fuel industry.

Since 2014, several hundred organizations have made significant pledges that total over $50 billion and growing. Divestment helps shine a light on the contributions of this industry to climate change and stigmatizes further investment into unsustainable energy sources.

But divestment isn’t just for large organizations. All of us can join in and begin to divest as individuals and grow the momentum to rapidly eliminate fossil fuels from our lives.

Here are six things you can do to personally divest:

1. Lobby your employer to divest from fossil fuels for all of its assets.

2. Divest all your personal investments from fossil fuels, including where you bank and which credit cards you use. Many large financial institutions have ties to entities you likely don’t support! Check out the ILFI credit card from Beneficial State Bank for a better option, and consider putting your money into funds that support renewables.

4. Trade in your gasoline car an electric vehicle, or better yet a bicycle! Stop buying petroleum directly. My family has gone all electric, and it’s been liberating to not have to go to the pump.

5.Buy a solar array for all your home’s power needs.

6. Live locally and give up flying, since air travel consumes so much fossil fuel.

Do these six steps and you'll be able to create and don a "I’m Divesting from Fossil Fuels and Investing in a Living Future" sticker. 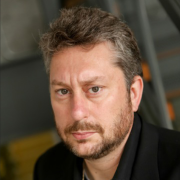 See all by Jason McLennan