The real estate titan second only to Walmart on solar

This story was updated Aug. 17 to clarify Prologis' size and the ownership structure for the panels.

If we asked you to name the three U.S. companies with the largest corporate solar footprints, there’s a pretty strong chance that you would get at least one of those names wrong.

Meet Prologis, a real estate investment trust with $65 billion in assets under management and a market capitalization of $28 billion. The company controls 149 megawatts of solar generating capacity atop its global portfolio of warehouses and industrial facilities. That’s double the amount that it had at the end of 2011.

A ranking tallied earlier this year by the Solar Energy Industries Association places Prologis second only to retailer Walmart in terms of capacity. It should be noted, however, that the number used by SEIA for that list is actually far lower than what Prologis claims in its latest sustainability report (PDF), out in early July.

For Prologis, the decision to invest in solar (something it has been doing for close to a decade) was financially motivated. It actually doesn’t use all that much power in its buildings, compared with commercial offices or retail space. The company views this as one way to generate more revenue from underused rooftops, said Jeannie Renné-Malone, vice president of global sustainability for Prologis.

In the scheme of things, the amount of power that Prologis isn’t huge — it’s still less than the capacity of a small, natural gas power plant. But the company figures it adds enough power to the North American grid each year to power 11,218 homes.

New construction is designed to be able to handle panels, should they decide to go that route.

The projects are managed by Prologis Energy, which partners with utilities, developers and financing organizations. (Bank of America was involved in one of the company’s biggest initiatives launched back in 2011.) It's studying the feasibility of leveraging funding mechanisms such as community solar, according to Renné-Malone.

Locations are picked depending on a variety of factors including the quality of the solar resources at the site, the state or municipal incentives offered in a given geography and the age and condition of the roof involved. That latter consideration is a huge one: Solar panels are weighty. Prologis replaces the roofs on its facilities roughly every 20 years, so it's a long cycle of renewal.

"New construction is designed to be able to handle panels, should they decide to go that route," Renné-Malone said. 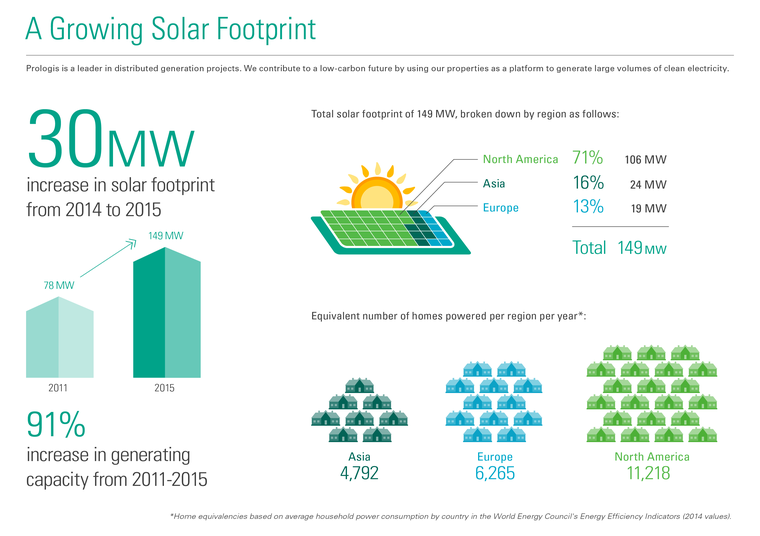 Most of Prologis’ solar sites (71 percent of its total portfolio) can be found in the United States, with the rest split between locations in Europe and Asia. The company doesn’t disclose what percentage of its buildings are solar hosts because the size of its portfolio grows and shrinks regularly with acquisition activity, Renné-Malone said.

However, a Slate report in January estimated the number at 10 percent. As of June 30, Prologis owned or management about 666 million square feet of space (including sites under development). The plan calls for it to reach a cumulative total of 200 MW by 2020.

As you might imagine, given that lens, operating its facilities sustainably is a huge priority. Last year, Prologis earned green building certifications (under programs including both LEED and BREEAM) for 45 more projects — bringing the total so far to 68 million square feet across 173 projects.

Close to three-quarters of the company’s entire portfolio uses energy-efficient lighting; as of 2016, all future construction and retrofits are directed to use LED technologies, Renné-Malone said.

Two other notable metrics from the company’s latest sustainability report:

Why solar can be a moneymaker for industrial real estate

Why solar can be a moneymaker for industrial real estate

Why Intel, NRG and Prologis believe in onsite clean energy