As urban planners, public transit agencies, and walking and biking advocates work to steer cities away from a future congested with cars — and as others discuss the ethics, realities and regulations of autonomous vehicles — a growing number of companies is less concerned with city streets and more interested in flying over them.

Since 2018, the number of electric aircraft in development worldwide has increased by 50 percent. Roughly 200 electric aviation companies are backed by more than $1 billion from investors. Whereas a good chunk of those companies are targeting the commercial airline industry, urban air mobility (UAM) is getting more attention — think ride-hailing flying taxis, electric multicopters and passenger drones that can be summoned with an app.

It may sound like a far-off, Jetsons-esque pipedream, but some urban mobility pioneers are aiming to offer air taxi service within the next five years, despite the inherent challenges with battery technology and aviation regulations at the city, state and federal level.

Some forecasts suggest that within 20 years, electric vertical take-off and landing (eVTOL) aircraft manufacturers, operators and infrastructure providers will have a market value of $318 billion. In the United States, the eVTOL market could be valued at $17.7 billion annually by 2040.

Similar to what’s happened with all-electric cars, unexpected obstacles undoubtedly will pop up in the air. For example, there currently aren’t enough air traffic controllers to handle an influx of flights across cities. The debate over autonomous vehicles also covers the skies, and one fatal accident could set the industry back years.

Some urban mobility pioneers aim to offer air taxi service within the next five years, despite the inherent challenges with batteries and aviation regulations at the city, state and federal level.

Still, the recent inception of ride-hailing helicopters shuttling passengers between major cities and airports is indicative of demand for urban flight, especially to suburbia. However, as UAM stands to transform urban transportation as we know it, the major challenges are: ensuring eVTOL aircraft don’t leave the have-nots on the ground, and making sure one- or two-passenger flying taxis don’t outcompete public and regional transit.

In the meantime, here are seven UAM companies to watch in the next 12 months.

Airbus, the multinational European aerospace company, is developing two electric UAM vehicles with the goal to offer short-hop flights across congested big cities and from suburbs to city centers for a price that’s competitive with traditional ground taxi service.

Airbus’ first vehicle is the autonomous eVTOL Vahana demonstrator, being developed by Airbus A³, the company’s Silicon Valley team. The self-piloted air taxi is capable of carrying a single passenger in a forward-facing cockpit, and the prototype has a range of about 31 miles, or 20 minutes of flight time. The Vahana’s batteries make up nearly 40 percent of the vehicle’s weight. As of early October, Vahana successfully had completed 114 test flights in Eastern Oregon (since January 2018), and it’s on track to finish up its test flight portfolio by the end of 2019. 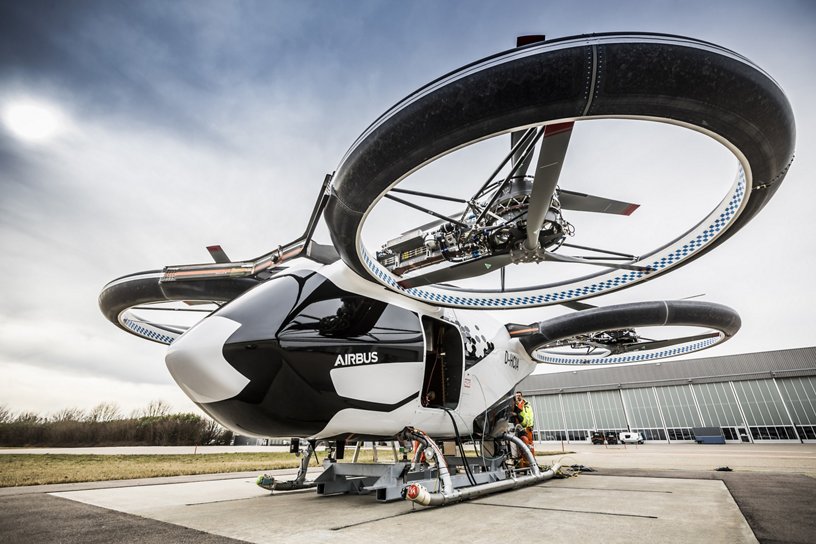 The second aerial taxi Airbus is developing is called CityAirbus, which the company is testing in Germany under the Airbus Helicopters division. CityAirbus is an all-electric mulicopter eVTOL vehicle that has four seats and is autonomously piloted. The full-scale demonstrator had its maiden take-off in May; CityAirbus currently has a cruising speed of roughly 75 miles per hour (mph) with up to 15 minutes of flight time. Over the next 12 months, Airbus will conclude its evaluation of CityAirbus. It then will incorporate findings from both the Vahana and CityAirbus demonstrators into a next iteration aerial taxi that it will likely aim to scale.

Airbus is investing in existing UAM technology in the form of its ride-hailing helicopter service called Voom, available in Mexico City, São Paulo and the San Francisco Bay Area, where flights start at $215.

One of the more secretive air taxi startups is Joby Aviation, based in Santa Cruz, California. The company has spent the last 10 years developing its own electric motors and technology for its eVTOL aircraft. 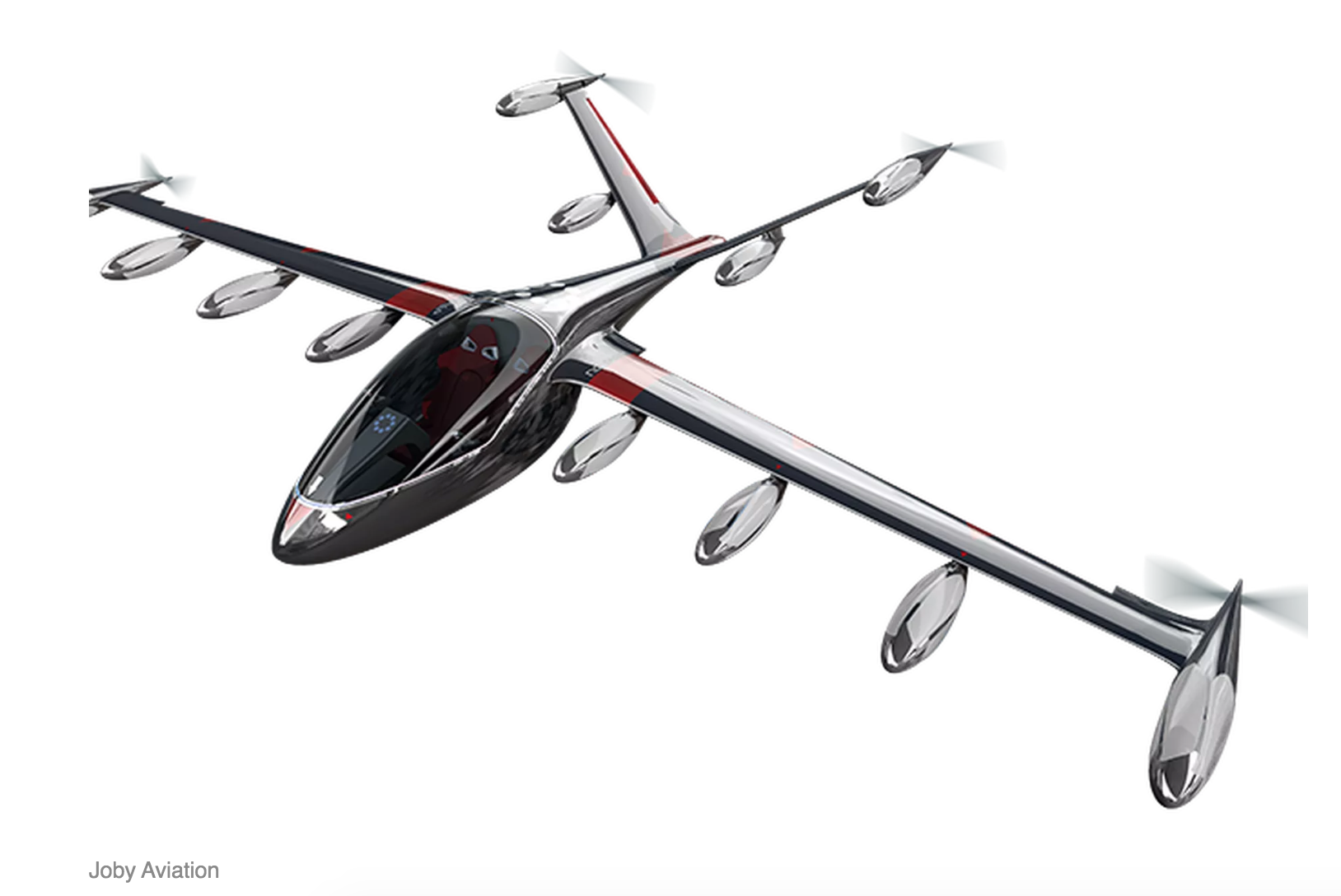 In February 2018, the company announced that it received $100 million in venture funding from investors such as Capricorn Investment Group, Intel Capital, JetBlue Technology Ventures and Toyota AI Ventures.

Those VC dollars are helping Joby Aviation develop a flying eVTOL taxi prototype that can carry five people up to 150 miles on a single charge. Unlike most of the other companies working on eVTOL designs and flying cars, Joby Aviation has been tight-lipped about its project.

Another UAM company to watch is Kitty Hawk, established by Google co-founder and Alphabet CEO Larry Page. The Mountain View, California-based startup has developed three all-electric flying vehicles; however, only two prototypes seem poised to fly in the urban air taxi market (Kitty Hawk’s Flyer is a single-seat hovercraft intended for recreational use).

Kitty Hawk is developing one of its potential air taxis, Cora, with Boeing. The company plans for the semi-autonomous two-person air taxi to be summonable with an app. Instead of a pilot, Cora mainly will fly via autopilot systems that will be supervised by a remote human pilot. Cora is fully electric and has a range of about 62 miles. Although it can take off and land vertically like a helicopter, in the air, its propellers provide more traditional plane-like forward thrust. Kitty Hawk is testing Cora in New Zealand. 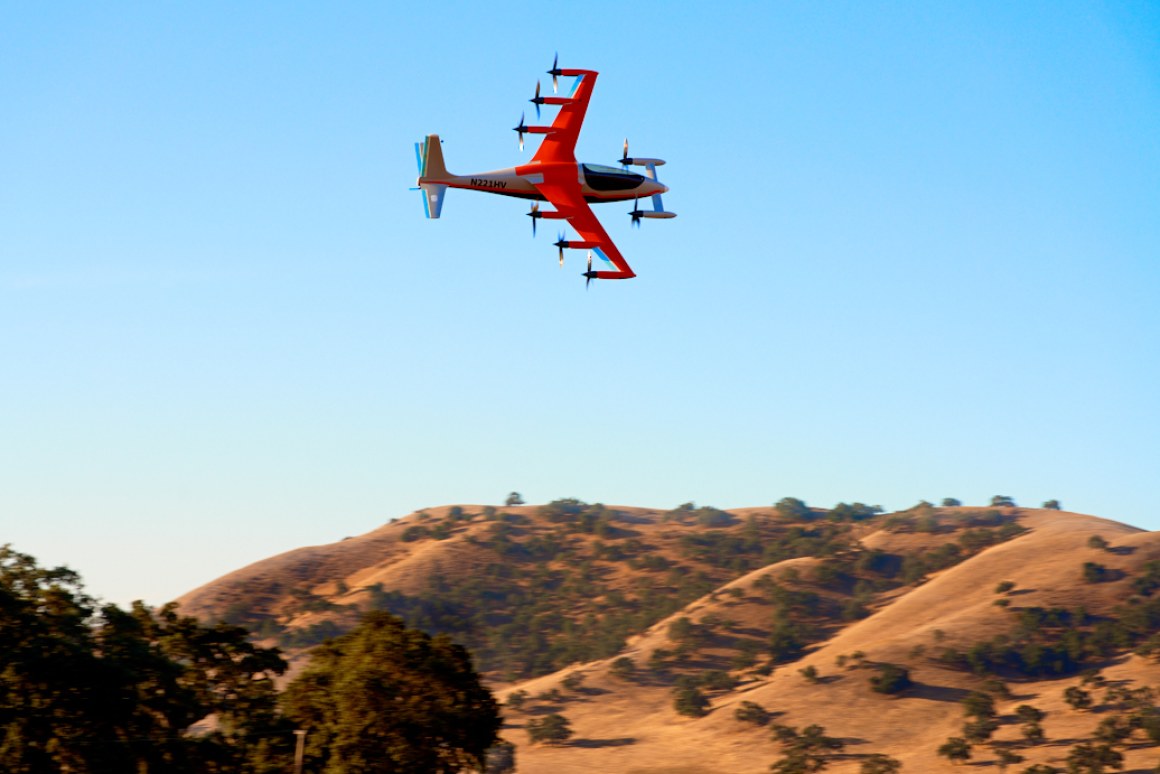 The company, however, has another single-seater air taxi named Heaviside. Kitty Hawk revealed Heaviside in October, and its latest eVTOL vehicle is designed to be fast, small and about 100 times quieter than a traditional helicopter. The aerial vehicle has been in development for two years, and all of Heaviside’s flights to date have been remotely controlled. (Here’s a video.) Heaviside has a range of about 100 miles, and the company says the eVTOL vehicle will be able to carry a single passenger between San Jose and San Francisco in 15 minutes using "half the energy of a car."

One company at the forefront of the UAM movement is Germany’s Lilium. The Munich-based air taxi startup completed the first vertical flight test of its new eVTOL five-seater aircraft, the Lilium Jet, in May. Lilium’s CEO and founder, Daniel Wiegand, said that within five years, a fleet of Lilium Jets may be shuttling people from Manhattan to Kennedy International Airport in 10 minutes for $70 a seat.

Whereas that’s an ambitious five-year goal, Lilium’s technology and designs look promising. Rather than resembling a large commercial drone, the black-and-white Lilium Jet is more of a carbon fiber glider with four rotating wings attached to an egg-shaped cabin. It has 36 small engines that act as thrusters, meaning that it can take off and land like a helicopter (albeit with a 36-foot wingspan); however, because the Jet’s engines are encased in the wings, it’s much quieter than a traditional helicopter.

Lilium designed the Jet to be battery-powered, and its current range is 186 miles with a top speed of 190 miles per hour. According to Wiegand, each Lilium Jet one day will cost several hundred thousand dollars, and insurance companies already have told him they’d provide him with risk coverage in the future.

To date, Lilium has raised over $100 million from investors. Since 2017, it’s grown from a team of just over 40 engineers to an organization of 350. The company seeks certification for its Lilium Jet from the European Union Aviation Safety Agency. To help with the certification process, Lilium reportedly plans to keep a human pilot on board its aircraft rather than making Lilium Jets fully autonomous. When it comes to designing and building an actual flying car, that’s what Chinese-owned, Massachusetts-based Terrafugia has been doing. The startup was created by Massachusetts Institute of Technology grads in 2006, and it was acquired in 2017 by Zhejiang Geely Holding Group, the same Chinese company that owns Volvo Cars and Lotus.

Terrafugia originally had said its flying cars would be available for purchase in 2019, but that doesn’t seem to be the case any more. Its two-passenger Transition is a combined hybrid-electric road vehicle and pusher-style propeller-driven plane. The engine reportedly burns about five gallons of fuel per hour. The manned vehicle, as an airplane, is capable of speeds around 100 mph, and it has a range of about 400 miles. Transition can fly up to 10,000 feet, and it’s equipped with a full-frame parachute system.

The startup also developed the TF-X, which is capable of vertical take-off and landing and reportedly can fit in a single-car garage. It has a max airspeed of 100 mph, a range of 500 miles and can carry three people, including a pilot. The estimated price for a TF-X is $279,000 and the company is expecting to begin selling the vehicles in 2021. It’s unclear whether state and federal regulations will allow the company to meet that production goal. 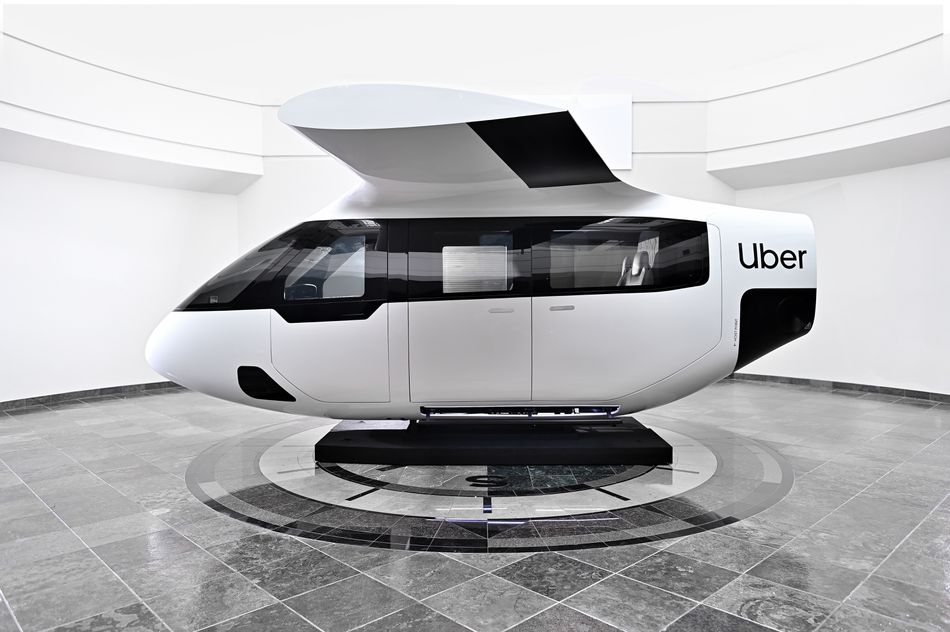 There’s no mistaking it: Uber wants to carve out a hefty piece of the UAM pie for itself. Considering that unlike other wannabe first-to-market UAM pioneers, Uber already has an app and brand that consumers recognize, the company is in a good position to break away from the pack.

Uber is working with six aircraft manufacturers, each of which is developing an eVTOL aircraft designed and built for aerial ridesharing. The companies are Bell, Boeing Company, EmbraerX, Jaunt Air Mobility, Karem Aircraft and Pipistrel. Uber asked each company to design an electric aircraft that’s able to both take off and land like a helicopter and carry four passengers and a pilot, but the six prototypes are each very different from one another.

Although it will be interesting to watch what each company puts in the skies, it will be arguably more intriguing to see which design concept Uber selects and scales. When that happens, short aerial rides between chic new skyports will start at $5 per mile, and ground transport, courtesy of Uber, will be provided at either end of the journey.

In June, the company said Uber Air will be up and flying in Dallas, Los Angeles and Melbourne in 2023 — an ambitious timeframe consider that the Vertical Flight Society’s executive director said it typically takes a conventional aircraft design 10 years to be certified for flight. While Uber Air pursues flying taxis, all signs point to the company expanding its pricey Uber Copter service in the coming years. As of now, the average ride will cost individual passengers between $200 and $225.

Bruchsal, Germany-based Volocopter GmbH is tackling UAM with its all-electric Volocopter 2X, an 18-rotor eVTOL air taxi that’s been referred to as a "gigantic drone you can sit in."

The 2X can carry two people at speeds up to about 68 mph, and it has a flight time of 30 minutes with a maximum range of 17 miles. It can either be piloted or fly autonomously, and the 2X’s batteries can be easily swapped out by robots before continuing each trip.

In the future, battery swaps, and passenger pickups and dropoffs will happen at "Volo-Hubs" and "Volo-Ports." There’s also a ballistic parachute in the top of the air taxi that can be deployed in case of an emergency.

The company is aiming to carry 100,000 passengers per hour across the world within the next decade, and the cost per flight allegedly will be comparable to a taxi ride.

The German startup is backed by Intel. Volocopter also received $30 million from German automotive company Daimler. It landed a partnership with Dubai’s transit authority to test its Volocopters, and the goal is to launch a commercial pilot program early next year. Volocopter conducted a public flight test of its air taxi in October in Singapore, one of the cities it’s targeting to launch its aerial taxi service in 2020. (Here’s a video of the flight.)