The time has come to move beyond blaming litterbugs and relying on volunteers to lead community cleanups after the pollution has occurred. The smart, sustainable strategy is to look upstream at the root of the problem and stop it before it starts.

In the United States, analysis of items collected during cleanups of beaches and rivers shows that disposable plastic items used "on-the-go" are most commonly found: plastic bags; cigarette butts; bottles; caps; straws; food wrappers; and food containers. According to the U.S. Environmental Protection Agency, the average plastic bag takes up to 1,000 years to break down. Even when broken down, the plastic can remain in the environment and the food chain. The problem is growing worse with the increasing trend to "convenient" consumption and the massive expansion of cheap new plastic production in the U.S. Gulf Coast.

Throughout the United States, local governments are responsible for solid waste management including litter prevention and collection, recycling, storm drain maintenance, tourism promotion, community health and protecting the local environment. Plastic pollution negatively affects each of these community functions and costs precious taxpayer dollars. As the sight of overflowing public trash cans becomes commonplace, it’s clear that existing approaches alone fail to stem plastic pollution. Simply too much plastic packaging waste is generated and cities can’t afford to pay for capture and management of all of it.

Cities can use proven techniques to decrease the amount of plastic pollution generated and capture it before it spreads to landscapes and waterways. While each city’s specific tactics should be customized to local conditions, reduction of pollution at a low cost can be achieved through a combination of leveraging local regulatory authority, requiring retailer responsibility, collaborating with partners and engaging citizens to solve pollution hot spots. 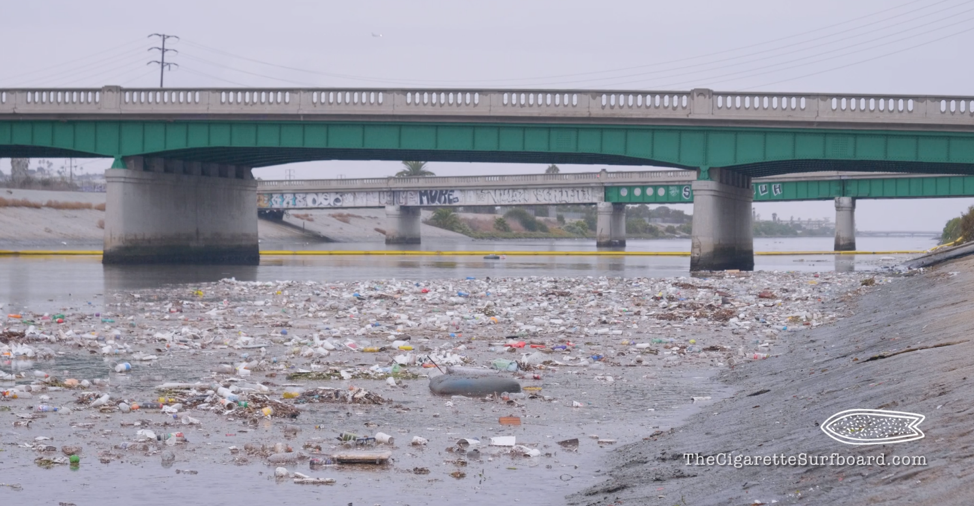 Many single-use plastic items are made of low-value material that makes them widely available but economically impractical to collect and recycle. When reusable alternatives and better materials are available, the best solution is to eliminate the items from use. Plastic straws, plastic bags and expanded polystyrene (EPS) foam food containers quickly fall into the better-to-eliminate category worldwide, as described in the Ban 2.0 List (PDF).

Plastic bag, straw and EPS foam ordinances have been passed in over 300 U.S. cities and a few states. The National Coalition of Environmental Legislators (NCEL) reports that 32 states are considering over 180 pieces of legislation to address plastic pollution.

The ability of a U.S. city to legislate restrictions on single use plastics depends on the state. Due to pressure by plastics and retail industry lobbyists, statewide preemption laws have passed prohibiting about 116 million Americans in 16 states from enacting bag ordinances to reduce plastic waste and pollution in their communities.

Legislation toolkits for communities and states to create ordinances to restrict or ban plastic items have been developed by Surfrider, Plastic Pollution Coalition and others.

The best strategy to cut plastic beverage bottle pollution is to make it easy for people to use fewer disposable bottles and to ensure that no bottle is left behind.

Eastern Municipal Water District (EMWD) in Southern California, in partnership with other local agencies, has installed nearly 120 water bottle fill stations at schools and popular community facilities. Wall-mounted or free-standing stations are designed to provide local students and members of the community with access to safe and reliable tap water to refill personal, reusable bottles. 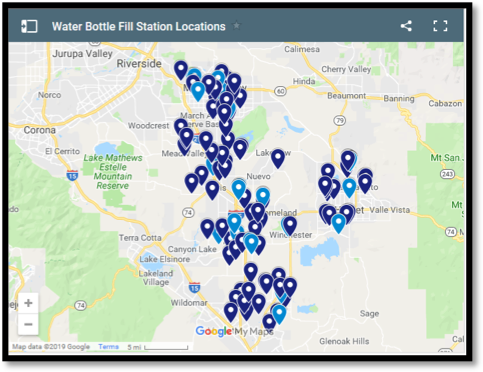 In the United Kingdom, where a deposit container law is not yet in place, research shows 81 percent of people said they voluntarily would go out their way to deposit a bottle or can. Below is a global map created with examples of incentivized reverse vending programs around the world. Key elements of each program and references are provided. 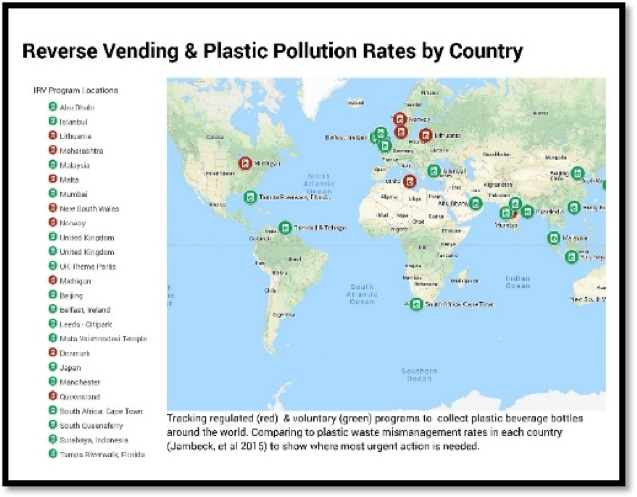 Retail, gas station and fast food businesses create profits and plastic pollution by attracting consumers to their stores and selling them disposable items to be consumed on-the-go. The image below shows the plastic pollution pathway of items from one overflowing trash can at a suburban retail center in Houston. The trash is blown into trees, the nearby neighborhood bayou where birds and turtles feed and a storm drain that leads to the Gulf of Mexico with turtle habitats. Unfortunately, this sight is common at other retail centers across the country and world. 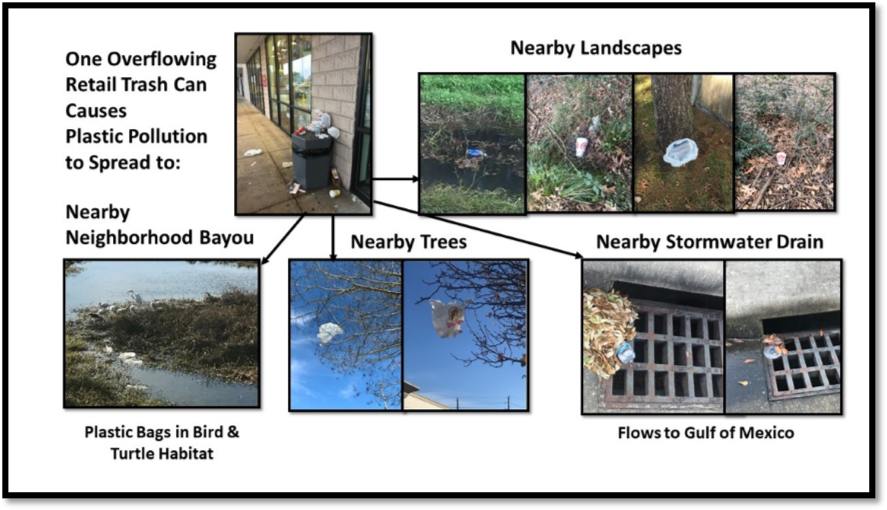 A survey of the 100 largest retailers and 25 largest fast food companies in the United States showed that not a single company reported on their policies and or practices to stop litter in their parking lots or in their urban area. The businesses should be held accountable for the plastic pollution they cause and not rely on volunteers such as Newell Nussbaumer in Buffalo, New York, who regularly cleans his neighborhood because of the litter generated around stores.

Many retailers refuse to take responsibility for the litter created in their parking lots. When a complaint was made to a major retailer at the Houston retail center, the store manager’s response was "Those aren’t our parking lots." This rationale is illegitimate because the parking lots exist to serve the stores. This rationale is reminiscent of consumer product companies stating "Those aren’t our factories" about sweatshop conditions in supply chains in the mid-1990s. Consumers demanded improvement in supply chain factories then and should demand retailers maintain clean parking lots now.

A simple course of action is a city requirement for all fast food operations to have trash cans at the exit of the drive-through lanes to avoid on-the-go disposal of fast food packaging. It goes without saying that the trash cans must be emptied before they overflow. Retailers and cities also can use new innovations such as smart trash bins to securely capture waste plastics.

The reality is that litter laws exist, but enforcement can be burdensome and costly if city staff are employed to continually monitor many locations across a wide area. Smart tools, networking applications and social media can help cities identify plastic pollution hot spots to focus on and address in a cost-effective manner.

Litterati describes itself as a technology company empowering people to "crowdsource-clean" the planet. The free Litterati app allows individuals to take photos of litter on their phones and upload to a public map. The mapped data enables cities to remotely identify litter hot spots. According to Litterati, people in the Netherlands used the Litterati app to map pollution and created such an impact that the local McDonald's promised to clean up the community around its store.

Gallatin City-County Health Department in Montana is using the Litterati app to document cigarette butt litter to push for new policies for tobacco-free parks. As reported by CGN, two Health Department staff members, employees at other departments and members of the community are using the app to document litter related to tobacco use. In 8.5 hours of work, app users documented almost 4,000 pieces of cigarette butt litter: 1,515 pieces in five city parks and 2,400 in a five-block area of Main Street in downtown Bozeman.

Social media is another efficient method of identifying litter hot spots in communities. Residents regularly use Twitter, Instagram and Nextdoor to lodge litter complaints. Monitoring of these sites by city officials is smart stakeholder engagement and an effective way to find major sources of litter in communities.

Container deposit laws are made at the state level and should be supported by cities to increase return of plastic beverage bottles and cut plastic pollution. Container deposit laws (also known as bottle bills) require the collection of a deposit on beverage containers at the point of sale and refund the deposit when the container is returned. According to NCEL, 10 states and Guam have a deposit-refund system for beverage containers.

Extended Producer Responsibility (EPR) laws put significant responsibility on manufacturers for the end-of-life management of their products after they has been used. EPR legislation is designed to decrease source pollution and require manufacturers to use recyclable and recycled materials and develop recycling programs. EPR laws are proposed for plastic packaging in California (AB1080) and Washington (SB5397).

In addition to visible plastic pollution, microplastic pollution to waterways and the ocean is a growing concern. It is an issue that cities and their water agencies should closely monitor to possibly act at the city level and to advise residents on what they can do at home. The Plastic Pollution Coalition has published a list of 15 Ways to Stop Microfiber Pollution Now aimed at individuals. As research progresses on the sources of the microplastics and the impacts on human health, further solutions will be invented, tested and made available to the public.

The city-changing magic of tidying up

"The objective of cleaning is not just to clean, but to feel happiness living within that environment," Marie Kondo, author of the bestselling "The Life Changing Magic of Tidying Up." says.

It’s time to make community cleanup days a relic of the past and celebrate clean cities every day instead.