If Canada’s political climate concern sounds like a sham to you, be assured that it often does to many Canadians, also.

The irony was not lost on us when, in July, Canadian Prime Minister Justin Trudeau declared that we were officially in a "climate emergency" just one day before approving a massive new fossil fuel pipeline extension. Many of us also know that since July, our climate plans have been revealed to be among the worst in the G7, that none of our political parties in the most recent federal election had a plan good enough to meet our environmental targets, and that we’re still only projected to achieve about 63 percent of our 2030 climate goals.

What seems to be lesser-known, however, is that our country is also becoming internationally renowned for some of the incredible new Canadian startups making contributions to sustainable technology. Including, for example, remarkable new advancements in clean energy tech, low-emissions alternatives to carbon-heavy industries — and feats of carbon capture that one day actually may help to reverse climate change. And that’s no joke.

It may be encouraging for those only familiar with Trudeau’s double-edged politics to explore just a few of our country’s most innovative new climate tech companies gaining traction.

Ever wonder what Canada’s previous Prime Minister Stephen Harper is doing these days? Wonder no more: News recently broke that Harper has been appointed to the advisory board for Terrestrial Energy, a nuclear energy company in Ontario working on advanced new reactors.

The promise of nuclear energy is that it can run reliably 24/7, unlike our energy from the sun or wind — and it offers us a comparatively lower environmental footprint if well managed. The problem is that while nuclear energy can remove some of our concern with renewable intermittency, the process of harnessing energy through nuclear reactions can add several risks for us to consider. To help offset these concerns, engineers have made considerable progress with two safer alternatives: nuclear fission involving molten salts and the energy of nuclear fusion. As such, the Integral Molten Salt Reactor (IMSR) design being developed by Terrestrial in Ontario is one promising new lead.

The design used by Terrestrial offers a dual-purpose grid backup support function, as well as potentially piping thermal energy to sites up to five miles away. Moreover, unlike many other molten salt reactor designs being developed, Terrestrial's IMSR uses uranium to tap into pre-existing supply chains. That "pathway to market," it believes, may allow the  company to beat out much of the competition with a functional reactor by the mid-2020s. 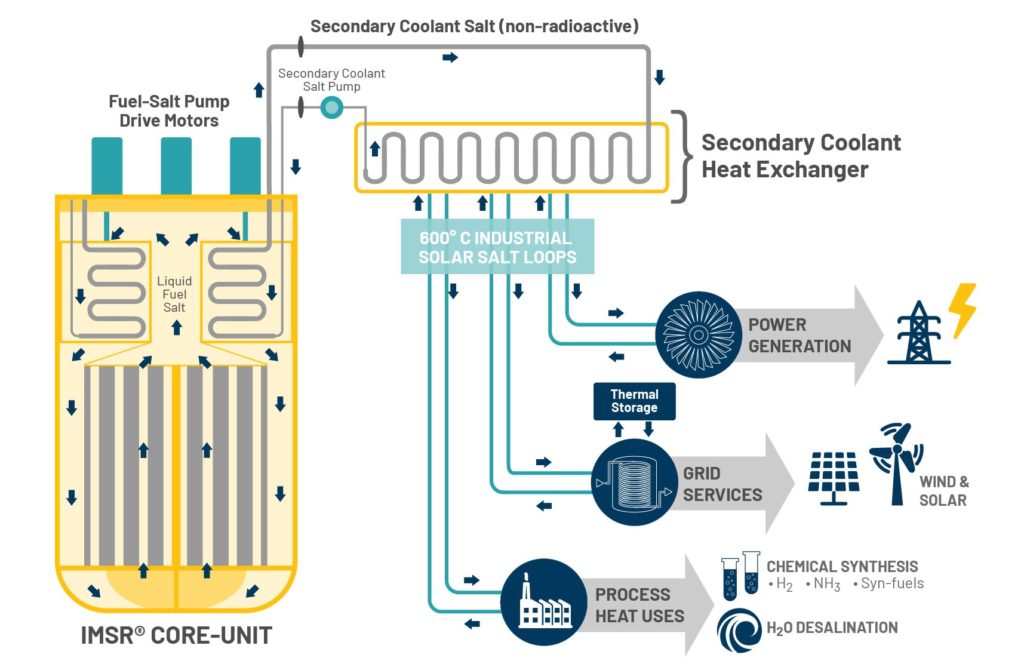 The second alternative, nuclear fusion, also has made some promising new gains. And with direct investments from the richest man on the planet helping to back a Canadian operation, international readers might be surprised to learn that one of the companies making the most waves out there is on Canada's west coast.

To clarify, "fission" is the type of nuclear energy many of us are familiar with. A fission plant is where Homer Simpson works. This brand of nuclear energy involves splitting heavier atoms into lighter ones, transforming energy in the process. Nuclear fusion, on the other hand, involves fusing atoms together — and, unlike fission, does not create nuclear waste in that process, materials that bad actors can weaponize for explosive reactions.

The problem with nuclear fusion is that it's a complex process requiring immense amounts of energy and heat (think millions of degrees Celsius). Then, technically speaking, particles have to be in a state of close proximity with the associated plasma and contained within a controlled chamber.

This engineering feat always has required immense amounts of energy to produce a smaller energy output. But incredible new advancements in superconducting magnets and computer analysis have enabled fusion researchers to close the gap on this equation. General Fusion is close to the forefront of these developments — with plans to reportedly bring a net energy positive reactor by 2025, very much on par with (or even surpassing) other industry leaders worldwide.

When critics routinely railed against carbon capture as economically impossible, Carbon Engineering doggedly pulled down operating costs to a marketable level and set the foundation for many others. In doing so, it has helped to move carbon capture from techno-utopian pipe dream to budding new industry.

Of course, Carbon Engineering is not alone in developing direct capture technology — and other factors have helped its efforts. The Trump administration in the United States miraculously approved the new tax provision 45Q, which incentivizes carbon capture and partially offsets initiatives such as those of Carbon Engineering.

New technology is routinely allowing scientists to "upscale" the carbon being captured so emitters can sell it, incentivizing the capture business further. Academic teams are also consistently finding more efficient ways of performing key aspects of the capture process to help make it easier (one such milestone even came out of the University of Toronto just a few months ago).

When fully operational, the first commercial plants designed by Carbon Engineering will capture about 1 million tonnes of CO2 per year apiece. In short: one facility will be able to perform the carbon-absorbing work of about 40 million trees, sequestering the annual emissions equivalent of over 200,000 cars. 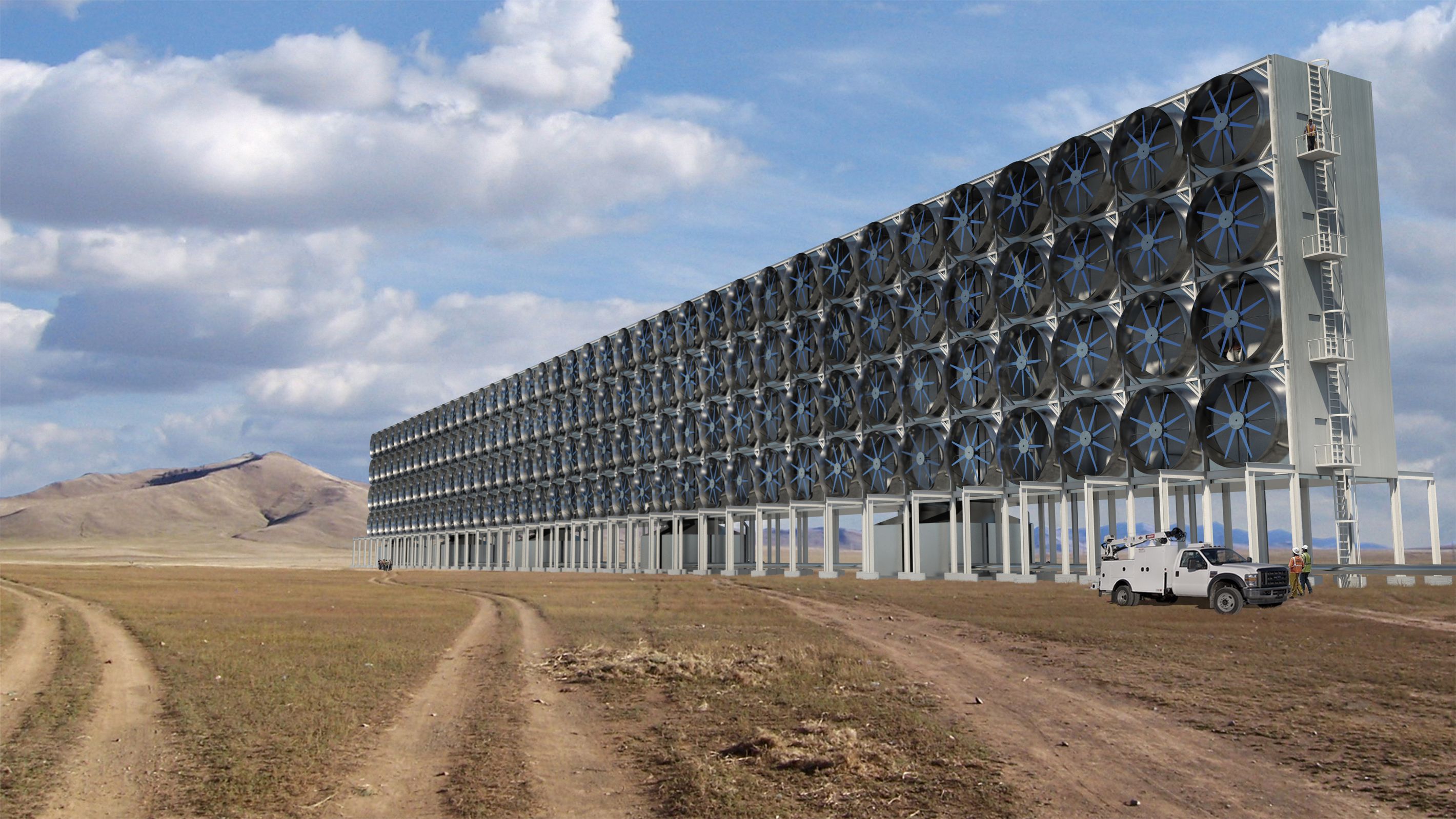 Keep an eye on this team, folks.

Many industry experts believe that capturing carbon will truly take off only if someone can find an economic use for it all and create an applicable market. Because up until now, the first comment that capture critics typically voice is: Great, but who’s going to pay for it?

The answer often has been that we, the taxpayers, may subsidize efforts to pull down carbon dioxide and then store it underground. But then, of course, critics reply: Great, but who’s going to pay for that?

C2CNT (CNT for carbon nanotubes) begins by splitting CO2 into its components of carbon and oxygen through a molten carbonate electrolysis process. The process is similar to the way aluminum is produced from its own oxide (aluminum oxide). Except in this case, carbon dioxide is the raw material driving the process and carbon nanomaterials are what is produced.

The process is reportedly high yield and low energy, running largely on solar power — and the C2CNT team has published its process in reputable academic journals. It also has been recognized as a Carbon XPrize finalist, given that the process reportedly uses about 2 to 5 tonnes of CO2 per day. 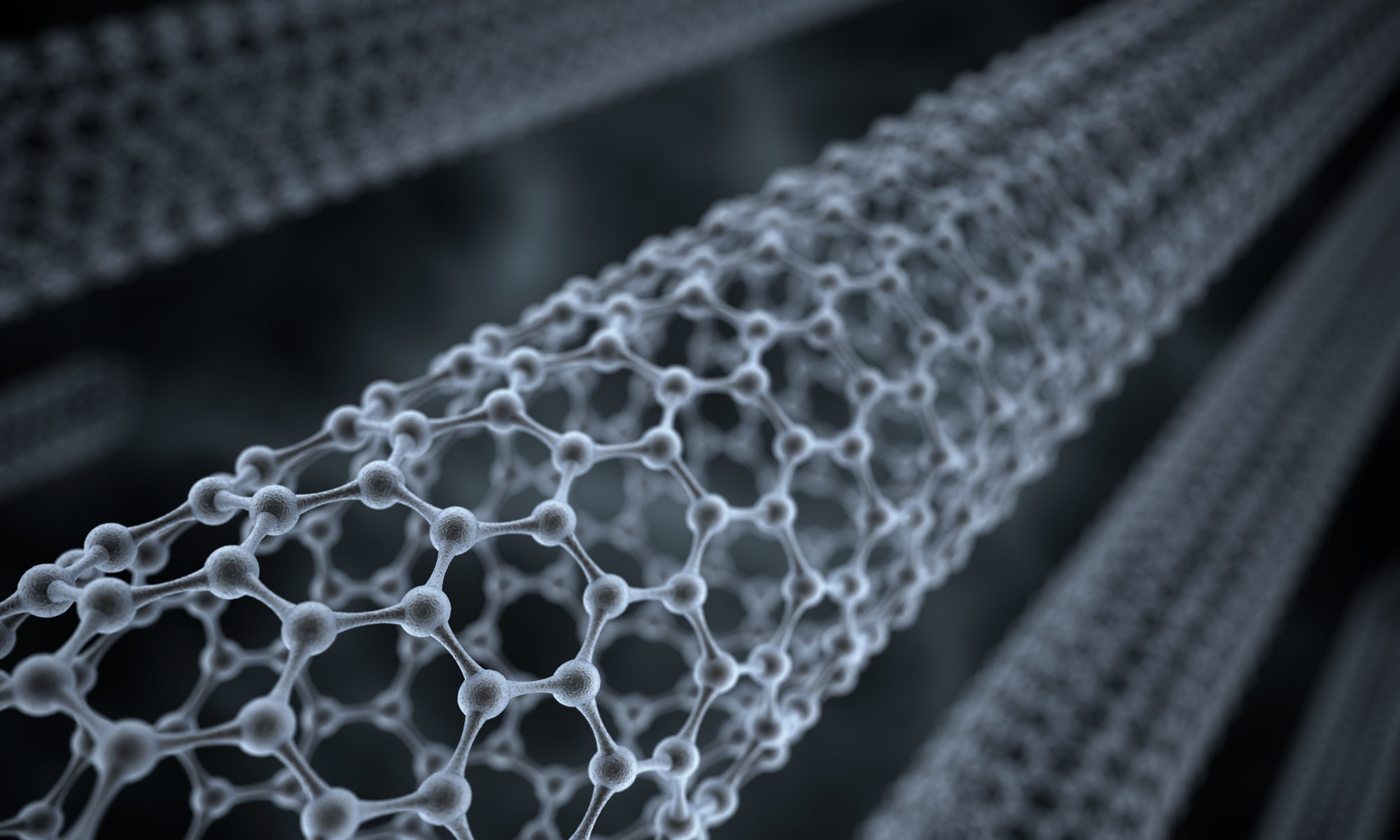 It might sound surprising, but the global concrete industry accounts for an astounding 7 percent of the entire world’s carbon dioxide emissions. Fortunately, as it turns out, curing concrete with captured CO2 instead of the water normally used can make the entire process less resource-intensive and become a nearly permanent housing for the carbon itself. No underground storage needed.

The CO2 is essentially mineralized through conversion into calcium carbonate during processing — trapping it safely away without the typical concerns of it leaking from a subterranean storage site somewhere.

Furthermore, the new mix of minerals within the concrete actually can make it stronger, creating an enticing market incentive for using fewer resources to make superior products. On top of that, manufacturing processes can be substituted into existing facilities and require smaller amounts of time to cure (about 24 hours, compared to the typical one to four weeks). CarbonCure is among the frontrunners developing this process.

Or consider a Canadian startup called CleanO2, which uses a much smaller carbon emissions reduction machine around the size of an air conditioner.

Its device, CARBiNX, can be fitted to natural gas-powered boilers to reduce both energy use in commercial and residential buildings and lower greenhouse gas emissions in the process (up to around 10-20 percent).

Did I mention that CleanO2 also then produces hand soaps and detergents with CO2 mixed in? It believes that we, as consumers, potentially can opt for products such as these in place of others to help contribute to creating a carbon economy. 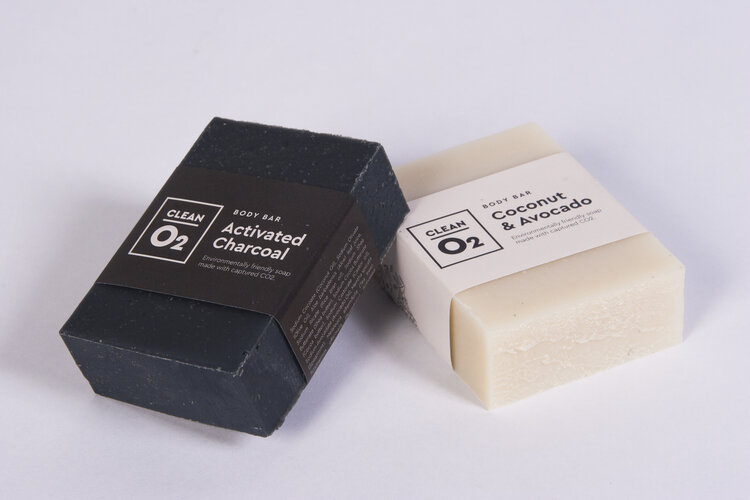 Another carbon capture company, Svante (formerly Inventys), markets its capture tech as fixable to pre-existing infrastructures where gases that normally would just be released into the atmosphere by heavy emitters.

With the help of Svante’s equipment, carbon emissions are routed through a proprietary filtration system first and separated thereafter. The market forces driving companies to adopt a system such as Svante’s arise in avoiding carbon taxation and potentially adding a revenue stream for "upscalable" CO2.

Moreover, Svante also claims that it, too, can capture roughly a million tons of carbon per year — again about the carbon equivalent of taking roughly 200,000 cars off the road. One of its newest partners, Chevron Technology Ventures, is studying whether to use the Svante approach in one of its facilities in California.

Many of today’s electric grids were not designed to handle what we want from our energy systems. Rather than having just one main source of power such as a coal-fired plant somewhere, we now want a multitude of distributed energy resources such as solar panels on buildings and wind turbines all contributing to our grid at once.

We also want energy transmissions that don’t just go one way (from the coal plant to us), but for owners of energy resources to be able to sell and commercialize their energy — to contribute to the grid or other local users.

Opus One produces an advanced grid operating platform capable of gathering all these integrated energy sources together, providing transactive energy functionality (where possible) and more in what it calls "our changing electric ecosystem."

These operations are not easy, but Opus One has cultivated growing renown for an intelligent energy management platform that combines two future essentials for the industry: energy decentralization and intelligent automation. 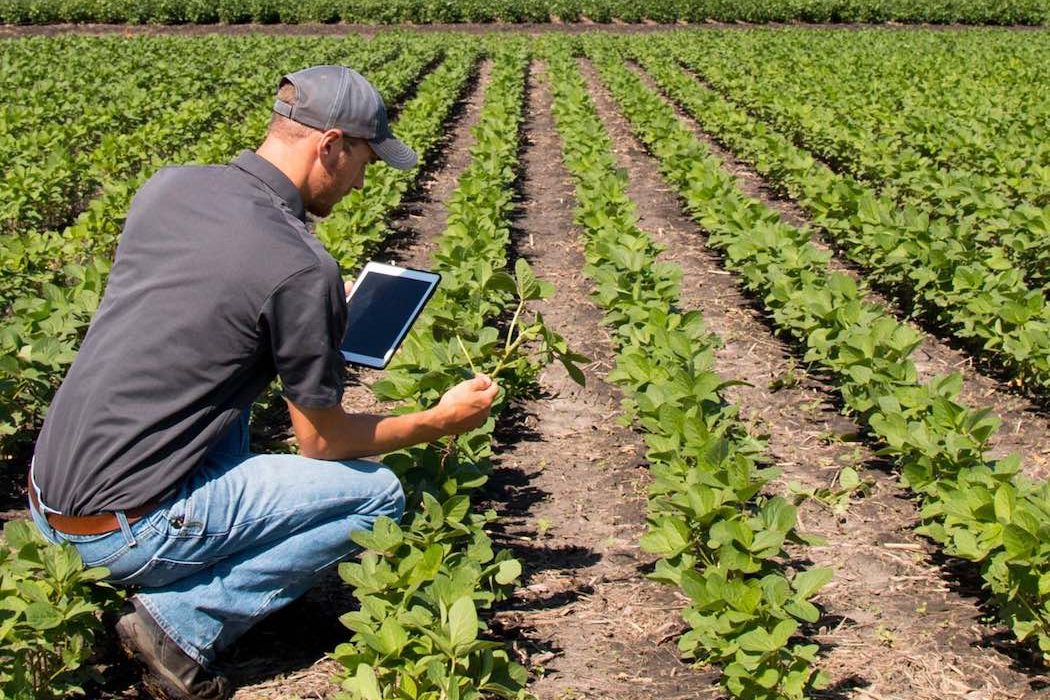 The amount of crops we lose to pests presents us with a staggering amount of spent energy, capital and the environmental costs of growing lost food around the world. In fact, Project Drawdown estimates that wasted food accounts for about 8 percent of all global CO2 emissions.

Eliminating crop pests is a challenge, therefore, being worked on by academic teams all around the world. One compelling concept has been to substitute natural materials dangerous to pests (but not for us) into pre-existing pesticides to make them more attractive for consumers. The concept is similar to how chocolate contains chemicals dangerous for dogs but not for us — and sounds much more palatable than the witches’ brew of chemicals normally used in typical pesticides.

This is where Vancouver-based Terramera ("Our Earth") comes in. Inspired by the Indian practice of using extracts from tropical neem trees as a natural pesticide for bedbugs, Terramera has developed a mix of natural ingredients for deterring crop pests, gaining the attention of worldwide agricultural giants. Which, if adopted around the world, could help slash agricultural emissions considerably. 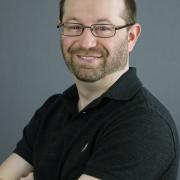 See all by Marc Schaus