In the Wild West of global supply chains — complex production networks notorious for outsourcing jobs, unaddressed safety hazards and myriad inefficiencies — gadgets such as smartphones and sensors might seem an unnecessary distraction.

The wave of companies jumping into the supply chain technology market would beg to differ.

Both existing logistics companies and a range of upstarts are rolling out products designed to trace materials back to their source, increase transparency into day-to-day supplier operations and reduce the unnecessarily wasteful journeys of products headed to their final destinations.

The aim is to adapt macro technology trends, such as the proliferation of mobile devices, wireless connectivity, cloud communications, Big Data analytics and the Internet of Things. By doing so, providers promise sustainability, accountability and the marketing ability to provide sourcing information to increasingly interested consumers. 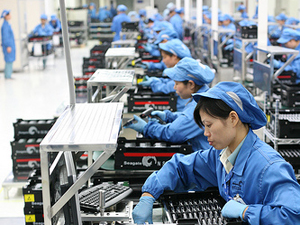 "U.S. expenditures on logistics are larger than the national GDP of all but 12 countries," the group noted.

As analysts including McKinsey have explained, "The latest digital advance won’t necessarily cure your supply-chain woes."

Beyond concerns about the actual efficacy of products being marketed to procurement managers, supply chain technology systems are often built on top of existing auditing and self-reporting systems that many argue don't always work to ensure sustainability. There's also the issue of finding solvent business models in an often-unwieldy field.

Perhaps the most buzzed-about node of activity in the realm of supply chain technology is improving traceability and transparency.

Radio frequency identification (RFID) has been around for upwards of a decade, eliciting related product offerings from the likes of tech heavyweights SAP and Oracle.

A range of providers are now looking to augment or improve tracking technology. Others in the space are more focused on transparency imperatives, such as quantifying supplier performance.

The enterprise software company already generates $3 billion a year in revenue and sells industry-specific supply chain management technology, offering features such as inventory tracking and management. Whole Foods aims to push this further, adding information such as water usage required to grow a product or other sourcing data points.

"The word on the street is everyone is selling the same food. Well, they ain’t," Whole Foods co-CEO Walter Robb told Fortune. "I want to communicate the difference and sell the difference, and we’re partnering with technology to do it."

Not all suppliers are created equal. So EcoVadis scores supplier sustainability for buyers such as Nestle, Heineken and Verizon.

"Purchasing managers and purchasing directors, they have huge leverage in terms of driving improvement," EcoVadis co-founder and co-CEO Pierre-Francois Thaler recently told GreenBiz. "Quite often they were seeing sustainability and CSR as a very complex topic, not as quantitative."

As an aggregator of supplier certifications that also does independent analysis, the eight-year-old company with offices in Paris and New York also provides cumulative sustainability scorecards and specific strengths and weaknesses to suppliers themselves. 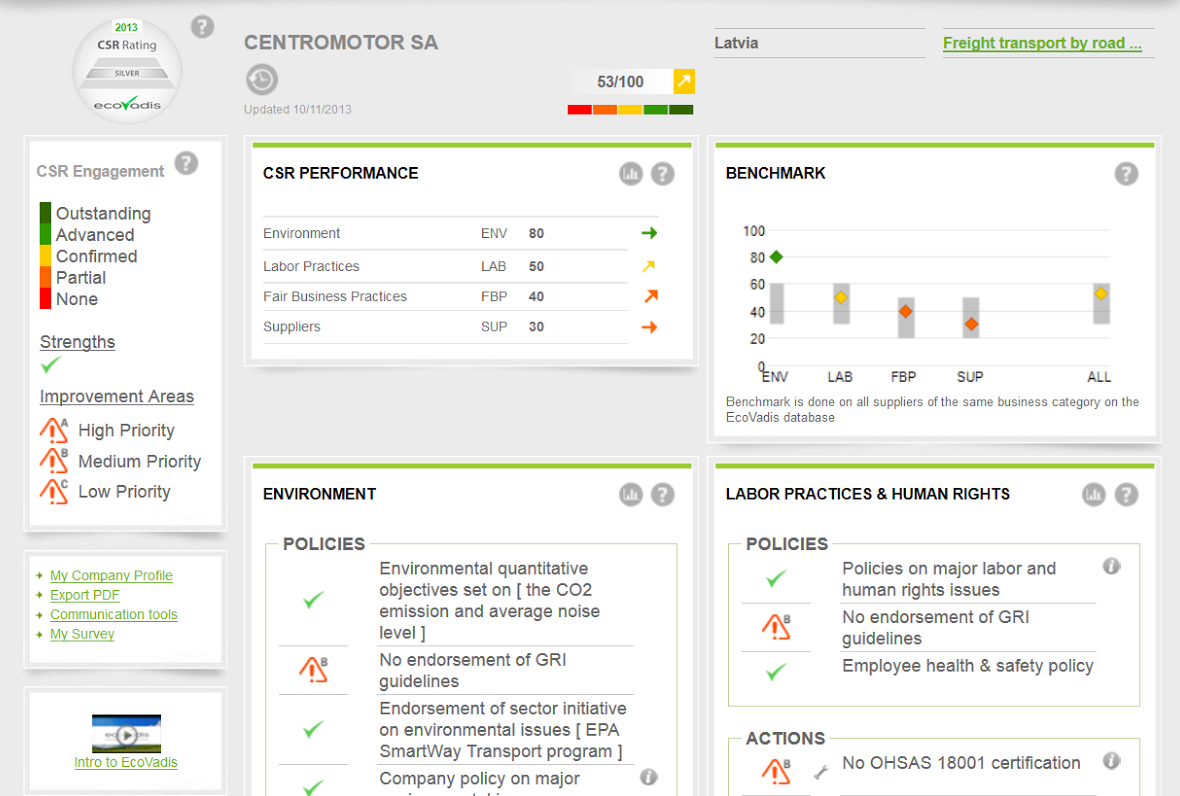 Where supply chains are increasingly recognized as a risk factor for large companies, providers such as Elementum promise to help minimize the fallout from disruptions, whether man-made or natural disasters. The company's tag line: "Harness change before competitors even know something’s wrong."

Elementum's core offering is a subscription Big Data tool that processes information from a huge number of inputs — industry Electronic Data Interchange, major news outlets, Twitter —  to alert customers of hazards such as a factory fire or major storm. The alerts are delivered through mobile apps, and the company also advertises more tailored business intelligence services.

"We then overlay your data with the supplier info you need to coordinate a resolution when issues arise," the company's website noted. "We’ll even provide automatic product and part impact assessment."

As a veteran of the RFID product tracking boom founded in 1999, Globe Ranger since has attempted to hone its focus to capitalize on the Internet of Things rush.

In the world of white collar employment, much ado has been made about the push to solicit and analyze real time worker feedback. The thinking is that monitoring worker sentiment can lead to increased engagement and ultimately, higher productivity.

The labor dynamics in developing countries heavily relied upon for supply chain manufacturing, however, are completely different. Take your pick of industries with storied histories of exploiting workers, from mines run by warlords to garment sweatshops or poor conditions for migrants employed at automotive factories.

But that disconnect is exactly what's compelling the upstart technology providers looking to connect directly with supply chain laborers with the help of one very important breakthrough: the smartphone.

In the Silicon Valley suburb of Sunnyvale, former quantum physicist Kohl Gill has been growing a company that aims literally to amplify the voices of supply chain laborers often rendered anonymous.

Five-year-old LaborVoices works with both companies looking to get a handle on worker realities and directly with workers by collecting feedback over cell phone calls in multiple languages. The company operates in eight countries on four continents and is financed primarily with subscription revenue from employers who receive information like warnings about specific factories. 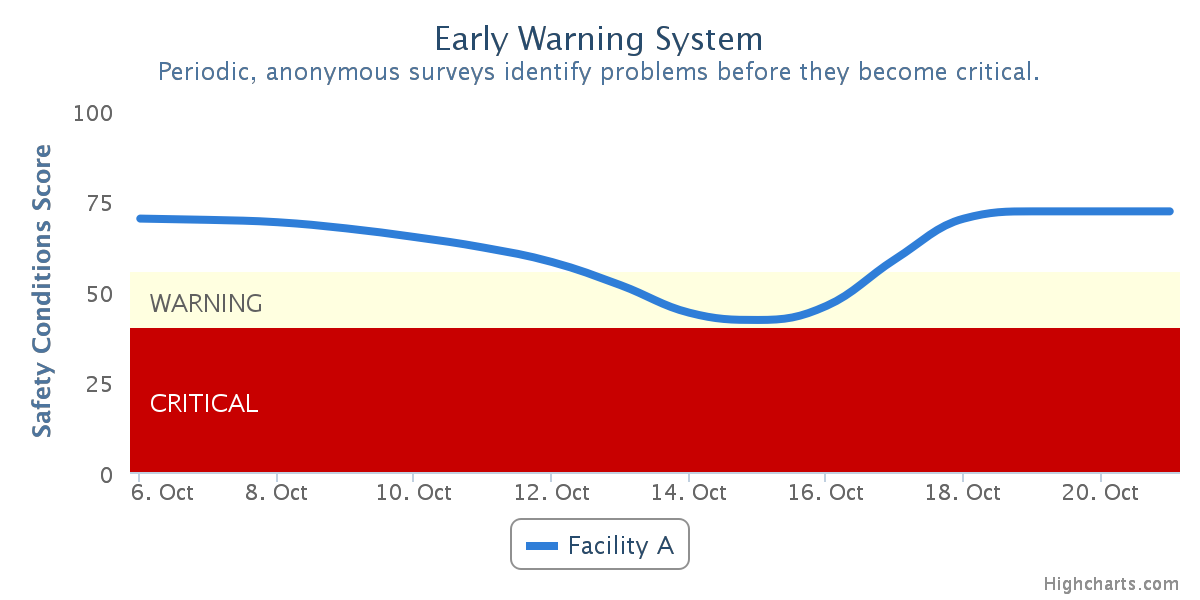 Given the unequal power dynamics at work between multinational corporations and supply chain workers, Gill had to strike a delicate balance in conceptualization of the product.

"We wanted to have a common platform that any worker could access as long as they had a phone," Gill said in an interview with GreenBiz. "In terms of security ... workers' identifying information is shared if and only if the worker herself has authorized that sharing."

In nearby Oakland, the nonprofit Good World Solutions has been honing a similar smartphone tool called Laborlink since a 2010 launch with 100 workers.

With a goal of providing companies "real time visibility" into their supply chains, particularly in the garment and electronic industries, the organization operates an anonymous two-way cell phone communication system.

"Factory workers that make our clothing and electronics are invisible," the organization's website explains. "They have no channel to report unsafe conditions, harassment or exploitative practices to decision-makers."

As of 2014, the company operated in over a dozen countries and says it is on track to reach 1 million workers in the next few years.

Melding logistics with the sharing economy

At the end of the supply chain lies the storage and transportation of finished products.

Warehouses and trucking aren't usually all that glamorous, but the logistics tech sector has gotten a boost from startups looking to apply sharing economy models to commercial supply chains.

If you're a consumer, you can use mobile apps like Uber or Lyft to hail a shared car ride. If you're a company looking for a carrier to haul around your products, you can use the app Cargomatic to reach a truck driver with extra cargo space.

The Southern California app that has raised more than $10 million from investors offers both pre-arranged and on-demand pick ups, the latter of which can arrive in as little as 15 minutes.

“It’s about understanding what the supply and demand patterns are on an ongoing basis," Cargomatic co-founder Jonathan Kessler told GreenBiz. "We tap into this huge network of independent owner-operators." Sticking with the sharing economy analogies, FLEXE has built a brand on being "Airbnb for warehousing."

The Seattle-based upstart is also looking to establish symbiotic relationships with other companies looking to make the most of evolving supply chain capacity, selling flexible warehouse space as an enabler for same-day shipping now being offered by a range of retailers, such as Google and Amazon.

While not as heavy on the on-demand craze, another logistics tech company, Cloud Logistics, is among those shifting toward a combination of cloud and mobile transportation management services.

The company focuses on clients in manufacturing, retail, 3PL and wholesale, offering services such as vendor-to-vendor communication, inventory tracking and other logistics analytics.