The following is an excerpt from the recently released book "How Culture Shapes the Climate Debate."

In the view of the social scientist, environmental problems are not primarily technological or economic, but behavioral and cultural.

While technological and economic activity may be the direct cause of our environmental problems, our individual beliefs, cultural norms and societal institutions guide that activity. It follows that we cannot recognize the environmental problems created by our way of life, nor can we develop solutions to address them, without first facing and changing the beliefs and values that have led to them.

With that as a baseline, let’s consider that the public debate around climate change has centered on a simplified binary statement of the issue: Climate change is currently occurring due to human activity, or it is not. 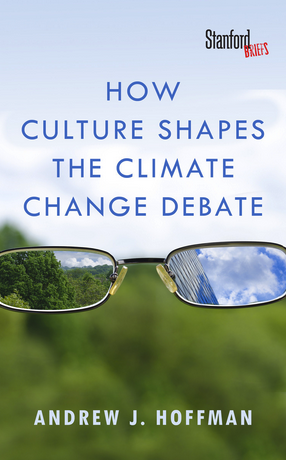 This simplification is troubling for physical scientists, in that it masks the complexity of the issue. It is intriguing for social scientists, because it helps to expose the extremes of the conversation and the values underlying their competing agendas.

These positions have less to do with the scientific basis of the issue and more to do with how people receive, assess and act upon scientific information. We need to be attentive to the inherently human aspects of this process.

In "Why We Disagree About Climate Change," Mike Hulme links our differing views on climate change with our differing views on: the nature of scientific method and knowledge, perceptions of the ecosystem and our place within it, the scope of human responsibility, our perception of threats, our approaches to risk mitigation, the relative prioritization of development and the environment, and the role of government in the market.

In the end, Hulme points out, climate change is a “cultural and political phenomenon which is re-shaping the way we think about ourselves, our societies and humanity’s place on Earth.”

1. Distrust of the messengers

The first form of distrust that some people, particularly those on the political right, have with climate change relates to its three primary spokespeople: environmentalists, Democratic politicians and scientists.

Many climate contrarians believe that climate science and, more directly, climate policy are a covert way for liberal environmentalists to interfere in the market and diminish citizens’ personal freedom. At the extreme, some fear that environmentalists have an agenda of dismantling capitalism.

Environmentalists long have been seen in this light, seeking to limit economic growth and human prosperity for the sake of the environment. The descriptor “watermelon: green on the outside, red on the inside” captures much of the sentiment that the movement’s values border on socialism or communism.

The second distrusted messenger is the Democratic politician, particularly as climate change has become a political wedge issue since the 2012 presidential election.

All but one Republican primary candidate presented climate science as inconclusive or wrong. In March 2011, every one of the 31 Republican members of the House Energy and Commerce Committee declined to vote on the simple idea that climate change exists. In 2009, House voting on the American Clean Energy and Security Act (otherwise known as the Waxman-Markey Bill) fell largely along party lines, with most Republicans opposed (although it did receive seven Republican votes).

But the Democratic politician that contrarians most distrust is former vice president Al Gore. While Gore created a great deal of attention to and awareness of climate change with his movie "An Inconvenient Truth," perceptions of him were intensely polarizing given his partisan identity.

Many contrarians suspect him of pursuing the climate agenda for his own personal and economic gain (as represented by his speaking fees and his business interests), and they resent his rhetoric and tone as being overly zealous.

The third distrusted messenger is the community of scientists. This has been a long-standing strain of distrust within American society, and it takes two forms.

The first is the belief that universities are heavily dominated by people with liberal politics. They outnumber Republicans at elite universities by at least six to one among the general faculty, and by higher ratios in the humanities and social sciences.

For example, one study found that 80 percent of psychology professors are Democrats, outnumbering Republicans by nearly 12 to 1.

The second form of distrust is a perception that scientists are “vigilantes” who, as Jonathan Haidt points out, are “devoted to documenting only what is, rather than what is good or what is beautiful,” thereby elevating reason over faith, the rational over the intuitive or spiritual, and separating fact from values and emotions.

Richard Hofstadter adds that scientists are seen studying issues that are “beyond the reach of the ordinary man’s scrutiny, but who can, and often do, determine his fate” through a disproportionate influence on the political process. In this way, some see scientists as a subversive force in society, one not to be trusted.

2. Distrust of the process that created the message

People hold differing expectations about what science can or should tell us.

This leads to a process of motivated reasoning that rejects the notion that there is even a scientific consensus on the issue.

Research by McCright, Dunlap and Chenyang Xiao found that “political ideology and party identification are moderately strong predictors of perceived scientific agreement; beliefs about the timing, human cause, seriousness or threat of global warming; and support for government action in both 2006 and 2012.”

In the contrarian’s view, “peer review” turns into “pal review,” and publication (or the awarding of grants) is based not on the merit of the research but on conforming to the political and social biases of scientists who hold editorial positions in academic journals.

In fact, studies have found a correlation between a general belief in conspiracy theories and the rejection of scientific findings on climate change and other issues.

“Climategate” helped to amplify this distrust of the scientific process, but indeed any inaccuracies in IPCC reports — such as inaccurate claims in the 2007 IPCC Fourth Assessment Report that the Himalayan glaciers likely would melt by 2035 — have driven skepticism among contrarians.

Beyond the IPCC, many people simply have a distrust of its parent, the United Nations, an organization that they feel challenges national sovereignty and favors the interests of less-developed countries in challenging capitalist markets.

3. Distrust of the message itself

For many people, the potential environmental disasters envisioned by climate change proponents are simply not possible or probable in the world as they conceive it.

Two bodies of literature account for this form of denial.

In the “Just-World Theory,” people are seen to possess deeply held beliefs that the world is just, orderly and stable. For example, most people do not believe that the environment radically will change in ways that will materially alter their lifestyle.

“Terror Management Theory” tells us that people will avoid thinking about climate change because it increases thoughts about death and one’s own mortality, something most people prefer to avoid. For example, most people will avoid dire predictions of water scarcity, the migration of diseases such as malaria or the increase in deaths in urban centers among the vulnerable poor and elderly.

In this way, movies such as "The Day After Tomorrow," with its depictions of Manhattan under water and glaciers moving down Madison Avenue, may serve as action-movie entertainment but do little to actually convince people that climate change is real.

As a result, the emergent frame for those not wanting to risk another global economic recession is that climate change science becomes a hoax, or if it is not, that greenhouse gas emissions may be considered a necessary (if unfortunate) by-product of the development imperative.

But the frame for those not wanting to risk environmental calamities is the “precautionary principle” — do no harm.

For some, the idea of anthropogenic climate change challenges their notion of God. In this line of reasoning, the notion that we as humans actually can influence the global climate is seen as extreme hubris. We live as beneficiaries of divine providence and no human action can subvert that moral order.

Many in the Judeo-Christian tradition look to the book of Genesis, both for its mandate that we “subdue” the earth and for God’s promise to Noah never to flood the earth again — as arguments against the science of climate change.

Rush Limbaugh, for example, devoted one of his shows to the idea that you cannot believe in manmade global warming if you believe in God. Thus, whereas some within religious communities have sought to argue that humans have a moral responsibility to protect the environment and must reassess their role as steward (derived from the Genesis mandate), others see this “green spirituality” as a move beyond concern for balanced stewardship and towards worship of the environment and exaltation of “horticulture over humanity.”

For many with conservative religious beliefs, the environmental movement is, at its core, pagan.

4. Distrust of the solutions that come from the message

Do we share a collective responsibility for the global climate that requires global cooperation to solve the challenges of climate change?

The answer to this question opens up a complex Pandora’s box. For some the solutions to the climate change issue lead directly to more government regulation and controls on the market. The tension embedded in this issue has long roots in the culture of American society, where viewpoints often lie on the poles of the communitarian-libertarian spectrum.

Some see the solutions to climate change as leading us towards a one-world government, or worse, social engineering.

Attempts to structure a global accord on climate change challenge long-standing beliefs on the part of some that humans cannot design a structure that will take us in the proper direction of our social destiny.

Fear of a societal structure designed by man derives “from our sense that when order is imposed by human planners, whatever their ends might be, something of great value is lost, something we wish vaguely and inadequately to call freedom.”

But those who believe in climate change are more likely to see the system, as it is presently structured, as leading to disaster. To them a reliance on providence or the economic system will not avert catastrophe but in fact invite it.

Beyond our fears of totalitarianism or catastrophe, there are sharp divisions within society in how we value the “assets” of the natural environment and whether we should limit human development for its protection.

For some, the precious ecosystem has inherent value whose integrity should be protected from human damage. For others, it is an economic asset, valuable for the resources it provides humankind.

Global Warming: Getting the Message to Main Street

Climate Week is over. What do we do now?