Way back in 1998 — the same year a primitive Internet search site called Google went live — the Japan Agency for Marine-Earth Science and Technology was hard at work on a futuristic-sounding endeavor.

The agency was in the early stages of developing a deep-sea autonomous vehicle called Urashima capable of navigating the ocean without a human driver at the helm, but rather routed by an on-board computer.

In the process, the underwater autonomous vehicle became a trailblazer in the increasingly crowded segment of the robotics market now attracting interest from industrial heavyweights like Caterpillar, household names in the auto industry and high tech companies like Google and Uber.

While sending a robot thousands of feet down into the ocean for trips several hundred miles long might seem like quite the technical feat, analysts are now looking to the lead of lesser-known autonomous vehicles — like new models of Urashima, which sell for up to $10 million a pop — to help map out a path to widespread commercialization of other autonomous vehicles.

Aside from underwater vehicles, consumer gadgets like a 100 percent autonomous vacuum being rolled out this year by Dyson offer other glimpses into the future of self-driving cars now preached by tech and auto industry evangelists, Harrop said during an IDTechEx webinar held on Tuesday to mark the release of a report on "Autonomous Vehicles Land, Water, Air 2015-2035."

The upshot: "It is very much work in progress," Harrop said, outlining a litany of logistical challenges likely to arise when adapting the elaborate networks of sensors, video cameras, radar, GPS and other hardware needed for autonomous vehicles to bigger enterprise and consumer markets. Logistics aside, anxiety abounds about everything from legality to automating driving and related jobs without readily-available alternatives.

Urban traffic, the liability involved with human passengers, outdated infrastructure, consumer skepticism, bad weather and myriad other logistical obstacles remain before an estimated 40 million cars with "sophisticated autonomy" can hit the road by around 2035.

Landing on the right response to those thorny challenges will likely have implications for a wide array of industries with varying success to date in the field, from military surveillance to mining vehicles being deployed by companies like Caterpillar, to agriculture and commercial trucking: 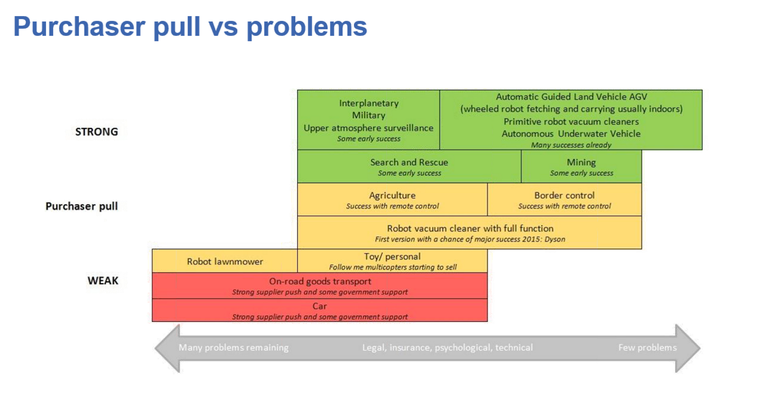 But technical, legal and policy challenges aren't stunting the enthusiasm of automakers and their suppliers, who see an opportunity with futuristic self-driving cars to market enhanced safety and efficiency for car owners who now have more options than ever to get around.

"It’s not user pull, it’s supplier push," Harrop said. "The number of cars in the world is going to go down. They need added value."

The potential sustainability implications for autonomous vehicles, while still not completely clear in applications across industries, revolves primarily around powertrain systems.

"The powertrains that are compatible are mainly electric," Harrop explained.

While varying hybrid and fully-electric cars, trucks and buses come with different carbon footprints, a new market driver for the emerging electric vehicle field would be welcome news for environmental advocates and public officials concerned with reducing emissions — particularly as other tech trends, like connected infrastructure, ridesharing and traffic or parking data analytics, promise to increase transportation efficiency and lower the number of gasoline-fueled cars on the road.

Auto executives are also pushing safety as a major selling point of autonomous vehicles — albeit one that still comes with major caveats.

“I view it as a solved problem," Tesla Motors Founder Elon Musk said at a Silicon Valley event on Tuesday. "We know exactly what to do and we will be there in a few years... In the distant future people may outlaw driver cars. You can’t have a person operating a two-ton death machine!"

Though Musk didn't divulge a timeline during his remarks, he added of Tesla that, "I think we will be the leader in autonomous cars that you can actually buy." That would hold the electric vehicle maker to a pretty strict timeline, since Google's autonomous car wing is aiming to get the product to market by 2020, and suppliers like Nvidia are already rolling out software designed to help get customers closer to that milestone.

Harrop also cites public goals by companies including Ford, Mercedes-Benz parent company Daimler AG and Jaguar to get autonomous vehicles to market by 2023 or 2024, teeing the sector up to really flourish by 2025-2030. But such efforts do depend on a unique set of components working in tandem, like stereo cameras, navigation and other features outlined in this BMW illustration: 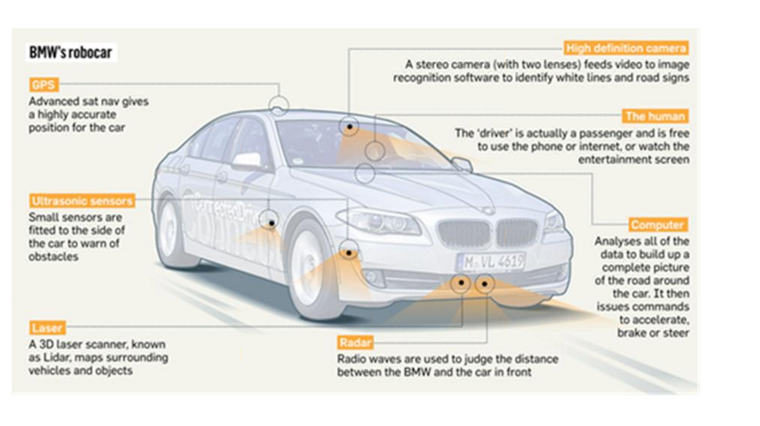 While it's no surprise that auto companies (or would-be auto companies) looking to secure a foothold in the rapidly-evolving mobility space would be gung-ho about autonomous vehicles, there's a big wild card in play.

"What is less certain is the extent to which government will assist in this push," Harrop said.

In addition to the lobbying and regulatory wrangling that would be necessary to adapt federal, state and local roadway codes of conduct, he added that infrastructure and online connectivity — a particularly tough nut to crack in dense "urban canyons" devoid of cell service — are tough.

Among the biggest challenges, Harrop said, will be reconciling driverless and human-controlled cars (a dynamic to which Musk also eluded) and defining what autonomous really means.

"Cars are going to be muddled up with humans who are walking, humans who are driving, bad weather and every legal problem you can imagine," Harrop said, later adding, “At the moment, most of them have a problem with strong sun, heavy rain... even leaves blowing, which is ridiculous. Dodging potholes seems to be beyond them."

There's also the example of commercial jetliners to consider, which have utilized auto-pilot functions in tandem with human pilots for years.

Harrop cites Air France flight 447, which crashed in 2009 and killed 228 people, as a cautionary tale. The "merest blip" in the plane's information system forced the team of three pilots quickly into action with disastrous results.

“The car tells the driver to wake up and take over — just think about that," Harrop said of the broader autonomous vehicle push. "It’s the Air France accident, big time."

While liability, insurance and legality still leave much to be desired in terms of clarity, that's not stunting investment and multibillion-dollar autonomous vehicle sales projections.

“There’s a clash of the giants," Harrop said, rattling off Ford, Daimler, Google and other huge names. "Don’t try to come in the middle, because the giants have unlimited money."

In the meantime, there are also plenty of other sectors up for grabs: 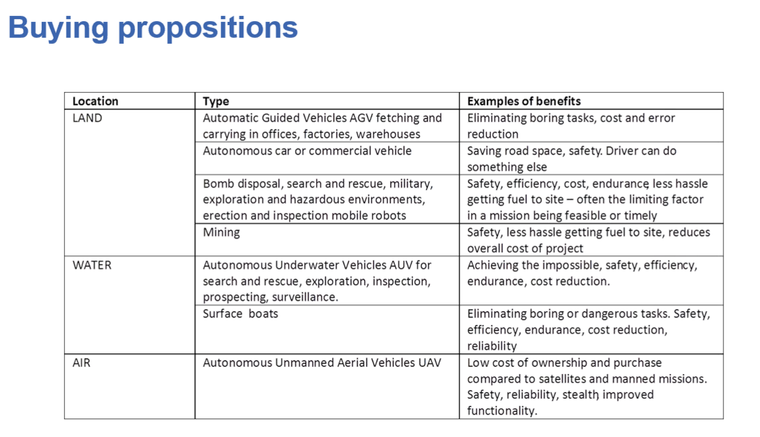