Resilience isn't the new sustainability — it's a whole new market

Resilience isn't the new sustainability — it's a whole new market

I would have made a hopeless librarian.

My desks, both at home and in the office, look as if Genghis Khan’s troops have just passed through. But I know where to find stuff. Happily, too, my brain constantly snaps new organizational frameworks over the wider world, imposing order on apparent chaos.

For example, I recently was playing around with yet another A-to-Z of terms used to describe the evolving stretch agenda for business, from Abundance through to Zeroing. Working through the alphabet, there proved to be many contenders for the R slot, but I’d be tempted to drape that mantle around the shoulders of resilience.

This is a term I recall hearing for the first time, at least in the context of climate, in a conversation high above Lake Geneva outside the headquarters of the World Economic Forum. This was back in 2006 or 2007 — and a major consultancy firm was insisting that resilience was set to be "the new sustainability."

I didn’t think so then — and I don’t think so now, at least not in terms of what these words actually imply. Properly understood, sustainability is about wider system conditions, resilience about the capacity to cope with the changes caused when those system conditions go awry.

Resilience addresses how we best prepare our economies, cities and companies for the downsides of the world we are creating. Sustainability, by contrast, seeks to address the root causes of the Great Acceleration — and to ensure that future growth happens within Planetary Boundaries.

Of course, the blur between these agendas always was considerable — and is likely to grow. That may seem an academic point to most business leaders, but — at the risk of sounding like a librarian — it might not if they had properly digested books such as "Antifragile: Things That Gain from Disorder" by Nassim Nicholas Taleb.

Think of it this way: Tomorrow’s business successes will flow from many things, but critical factors will include the ability to respond to disruptive change — and to create it.

Meanwhile, the spotlight is opening out from companies and their supply chains to cities and urban regions. Last year, for example, Rockefeller Foundation president Judith Rodin launched her impressive survey of the resilience agenda, The Resilience Dividend (sub-title: Managing Disruption, Avoiding Disaster, and Growing Stronger in an Unpredictable World).

Rodin argued, “Building resilience is one of our most urgent social and economic issues because we live in a world that is defined by disruption. ... Not a month goes by that we don’t see some kind of disturbance to the normal flow of life somewhere: a cyber-attack, a new strain of virus, a structural failure, a violent storm, a civil disturbance, an economic blow, a natural system threatened.”

She flags three factors as key: urbanization, with cities impacting natural systems that are key to human resilience; climate change, with a growing risk of hordes of climate refugees; and globalization, spurring economic volatility and undermining the power of national governments.

Then Rodin highlights five main characteristics of resilience that can be acquired by individuals, communities and organizations alike.

“To be resilient,” she said, “is to be aware, adaptive, diverse, integrated and self-regulating.”

In relation to the last of these, it was interesting to hear Paul Achleitner, chairman of the Deutsche Bank Supervisory Board, telling the Davos faithful in January, “Self-regulation, no matter what you do, is just not going to be enough.” 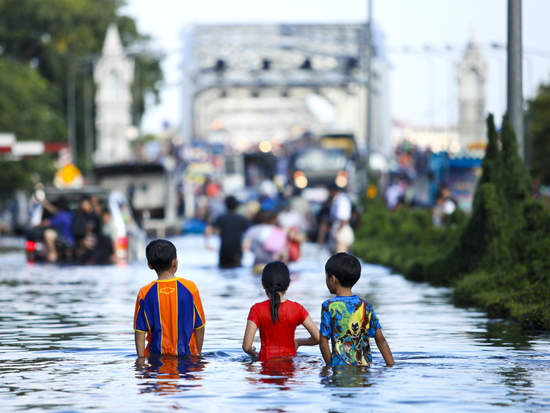 Shutterstock
Extreme weather, from floods to severe droughts, are one driver of new discussions about resilience.
From finance to climate, new types of systemic thinking, strategy, management and regulation are urgently needed.

All of this was playing through my brain as I participated in a recent board meeting for Peter Head’s Ecological Sequestration Trust (TEST). Their domain name: Resilience.io. They are evolving an “open-source, cloud-based regional platform, which gathers satellite/earth observation, open government and crowd-sourced economic, social and environmental data together in one place, in an understandable, palatable and visual format.”

Visualization will be crucial. Anyone impressed, as I was, by the data imaging systems featured in films such as "Avatar" or "Minority Report" may recognize elements of TEST’s emerging technology. Although the talk is of information-rich “cockpits” supported by massive open online course, the ultimate effect could be like a combination of the "Avatar" screens and a digital campfire for tomorrow’s movers and shapers.

Over time, such tools will help us track new risks and opportunities. The opportunity angle is trending strongly, as is underscored in the first edition of The Global Opportunity Report. This was published by the Monday Morning Global Institute in January to coincide with the latest edition of the World Economic Forum’s Global Risks report.

Strikingly, in its ranking of opportunities, based on inputs from over 6,000 private sector leaders across 21 countries, "Investments in Resilience" trail at the bottom of the 15 top-scoring opportunities. (This despite that this space will conjure markets worth tens of trillions of dollars.)

More positively, you could argue that the other 14 opportunities listed all contribute to resilience and ultimate sustainability.

At the top of the list, at least for these private sector leaders, are "Water-Efficient Agriculture," "Everyday Health Enablers" and "Fresh Water Production." Lower down come "Energy Autonomy," "Smart Cities" and "Cost-Effective Adaptation."

Identifying opportunities is an excellent first step, but we also need to work out how to exploit them. The market opportunities for those embracing the Breakthrough Challenge in good time and order are likely to be immense.

Companies, cities and economies that work out how to do so, and to grow stronger through periods of uncertainty, turbulence and transformation, could well end up dominating the 21st century.

Learn more about how businesses are building resilience into their supply chains at GreenBiz Forum 15.

Why resilience is essential in a volatile world

Death to personal cars? Paving the way for sustainable mobility