Acts of courage in the 2017 sustainability movement

When President Donald Trump signed an order in early December to remove more than 2 million acres of Utah land from federal protection, Patagonia was ready.

As mainstream newspapers queued up news alerts and flooded social media with comments about Trump's death sentence — which drastically reduced the Bears Ears and Grand Staircase-Escalante National Monuments — the outdoor apparel and products company dedicated its website to coverage, packaged under the critical headline, "The President Stole Your Land."

The statement quickly went viral. REI also spoke up, albeit in a much more muted fashion. The Wilderness Society already had launched a campaign of its own, setting up a mock site for a fake company called "Landmark Estates" dedicated to selling off national parks.

But Patagonia isn't just talking. A week later it joined seven other organizations, including the National Trust for Historic Preservation, in filing a suit against the "dismemberment" of Bears Ears and challenging the president's authority to shrink a national monument.

"We’ve fought to protect these places since we were founded and now we’ll continue that fight in the courts," said Rose Marcario, president and CEO of Patagonia, in a statement. That battle is likely to be very public and very protracted.

The act described as "angry and defiant" by Salon's culture editor Gabriel Bell is hardly out of character for Patagonia. After all, founder Yvon Chouinard long has embraced the idea that more companies — public and private — should step into the role of environmental activist. (It's one of the better-known brands certified as a B Corporation, which forces certain levels of accountability and performance.)

But 2017 will be remembered as the year in which many other companies with strong corporate sustainability missions stepped out of the wings onto center stage talk discuss their positions. Here are more notable moments of defiance.

When the president turned his back on the Paris Agreement in early June, hundreds of companies, states and cities were ready with a plan of their own — one orchestrated by World Wildlife Fund and 25 other groups.

By mid-July, more than 2,000 businesses and organizations were part of the We Are Still In movement including Amazon, Apple, BASF, Google, Hewlett Packard Enterprise, HP, IBM, Mars, Microsoft and Walmart. Their joint letter declared:

"The Trump administration’s announcement undermines a key pillar in the fight against climate change and damages the world’s ability to avoid the most dangerous and costly effects of climate change. Importantly, it is also out of step with what is happening in the United States."

By early December, the list of signatories stood at 2,300, including 110 U.S. cities, 20 states and more than 1,400 businesses with U.S. operations. Michael Bloomberg sized the collective economic power of these "non-federal actors" as the third largest economy in the world — behind just the United States and China. They also account for nearly 1 gigaton of greenhouse gas (GHG) emissions annually, and signing the pledge means they've committed to quantified reduction targets.

"We're going to uphold our end of the deal, with or without Washington," said Bloomberg, who along with California Gov. Jerry Brown has become the most outspoken champion of the corporate and civic resistance to the Trump administration on climate policies. Elon Musk and other leaders climb on soap boxes

CEOs such as Apple's Tim Cook, Google's Sundar Pichai, Facebook's Mark Zuckerberg and Goldman Sachs' Lloyd Blankfein took to Twitter to share their views about climate change publicly often in the past 12 months. The outcry was particularly vocal around Trump's decision to pull the United States out the Paris Agreement. (The Paris comment below was actually Blankfein's first tweet.)

Today's decision is a setback for the environment and for the U.S.'s leadership position in the world. #ParisAgreement

For Tesla CEO Elon Musk and Disney CEO Robert Iger, Trump's decision to pull out of Paris was the final straw. Both resigned positions on the president's business council as a matter of principle. "Protecting our planet and driving economic growth are critical to our future, and they aren't mutually exclusive," Iger said.

2017 was the year in which institutional investors started voting with the climate. In early September, influential fund manager Vanguard issued a letter informing companies that it would require more transparency about the material risks they face due to severe weather events, natural resource shortages and stranded assets that could become worthless during the fight against climate change.

We're going to uphold our end of the deal, with or without Washington.

"Our investors are long-term-oriented," said William McNabb, chairman and CEO of Vanguard, during an interview in late November at a symposium held by the Sustainabilty Accounting Standards Board. "The impact on the value of a company of not handling the risk can be profound."

As of mid-December, 237 companies representing a market capitalization of more than $6.3 trillion have lined up to support the recommendations of the Task Force on Climate-related Financial Disclosures, part of the G20's Financial Stability Board. These are suggestions for voluntary transparency. Among the supporters: Accenture; BlackRock; Dow Chemical; Dupont; JetBlue; Johnson Controls; Kering; Maersk; and PepsiCo.

Thou shalt not speak of it. According to reports, key federal agencies including the Environmental Protection Agency, the Department of Energy and the Department of Agriculture forbade staff to mention climate change in their work. And in August, a committee advising the National Oceanic and Atmospheric Administration on developments was disbanded.

Despite these attempts at censorship, important reports have managed to emerge in time for outsiders to organize thoughtful responses — like the early draft of Energy Secretary Rick Perry's review of wholesale electricity markets, a paper the agency is using to justify a controversial subsidy proposal for coal and nuclear plants.

Particularly notable was the release in November of an assessment by 13 agencies that "strongly connected" the climate of the United States to the changing global climate. The main position was directly at odds with the current administration's position (emphasis by the report authors):

This assessment concludes, based on extensive evidence, that it is extremely likely that human activities, especially emissions of greenhouse gases, are the dominant cause of the observed warming since the mid-20th century. For the warming over the last century, there is no convincing alternative explanation supported by the extent of the observational evidence.

In August, EPA director Betsy Southerland (most recently responsible for water policy) resigned and used her departure letter to agency staff for a bit of rabble-rousing. In it, she protests her new boss Scott Pruitt's "draconian" cuts to the agency's budget, criticizing the burden that they will put on states and future generations.

As of her resignation, Pruitt's team — well-represented by former industry-centric lobbyists — was working on repeals of at least 30 rules covering everything from toxic chemicals to clean water to clean power production.

"The best case for our children and grandchildren is that they will pay the polluters' bills through increased state taxes, new user fees and higher water and sewer bills," she wrote. "The worst case is that they will have to live with increased public health and safety risks and a degraded environment."

Since Southerland's resignation, agency employees who have a history of speaking up have found their communications under scrutiny. 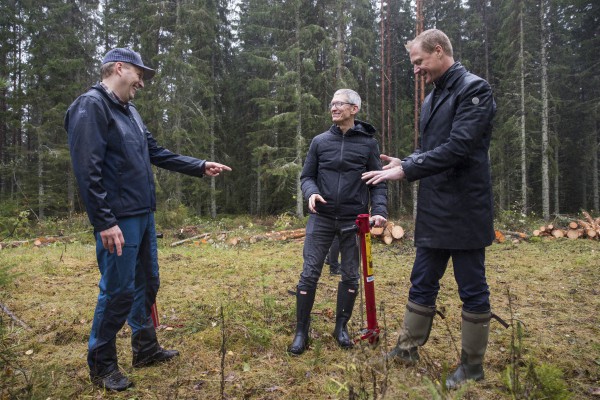 It takes courage to step forward in the Trump era of discourse.

At the least, those who speak up could find themselves the subject of a vicious tweet. (Interestingly, the president has largely refrained from using his favorite bully pulpit for that purpose over the past 12 months.) At the worst, you could wind up as a defendant in a well-funded lawsuit that tries to portray environmental activism as akin to racketeering. Greenpeace and ForestEthics (now called Stand) were both the subject of a case dismissed in California. A similar one is still pending in North Dakota, centered on protests against the controversial Dakota Access pipeline.

Despite that pall, there's solid evidence to suggest that the corporate resistance against the Trump-era attack on environmental policies will persist. As Apple's Cook aptly put it in a memo to employees earlier this year: "Our mission has always been to leave the world better than we found it. We will never waver, because we know that future generations depend on us."