<p>Adobe Systems didn&#39;t set out to become a net zero company, one that generates or offsets as much energy as it uses. But now that&#39;s one of the firm&#39;s central sustainability goals, the chief of global facilities told the GreenBiz Forum.</p>

Adobe Systems, the maker of Photoshop and Acrobat software, didn't set out to become a net zero company, one that generates or offsets as much energy as it uses.

To hear Michael Bangs tell it, the company happened upon a path of energy efficiency and grew increasingly more aggressive in the pursuit until achieving net zero became one of the firm's central sustainability goals.

'We're trying to get to net zero -- we're not there yet, but we're trying," Bangs told the audience at the GreenBiz Forum today in San Francisco. "We realize that sustainability is more than just our product, it's really how we operate our business."

Bangs, Adobe's director of global facilities operations, described the company's net zero strategy during a "One Great Idea" presentation at the forum. He also announced the firm's latest move toward that goal: the installation of two 200-kilowatt Bloom Energy fuel cells at Adobe's San Francisco offices. 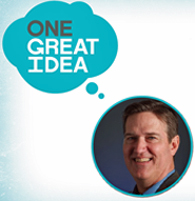 The fuel cells, which can run independently from the grid and produce no carbon emissions, are expected to provide 35 percent of the power used at the site, he said. Adobe has a dozen other Bloom boxes -- each of them 100-KW fuel cells -- at its headquarters in San Jose, where the technology supplies about 30 percent of the energy for the site.

They are just a few of the sustainable design features at the property, whose three office towers were certified and then re-certified at LEED-Platinum level, the highest rating possible from the U.S. Green Building Council. The headquarters complex also has 20 vertical wind turbines, whirling spires that are so eye-catching that they have been mistaken for art sculptures. Bangs ran down a list of the green building elements in San Jose and at other Adobe properties when we chatted last spring about the company's facility initiatives.

He recapped those features and more in his talk today. Adobe's property portfolio covers roughly 3 million square feet of space worldwide. The headquarters in San Jose account for about 1 million square feet; that site and the San Francisco property make up 37 percent of the total square footage. By the close of fiscal year 2010, about 45 percent of the company's square footage was certified as green building space under the LEED standard. And as of today, 10 facilities are LEED-platinum green buildings.

The company's work toward net zero started more than a decade ago during the energy crisis of 1999-2000, Bangs said. In California, then-Governor Gray Davis called on utility customers to cut their usage by 2 to 3 percent. At the time, Adobe found it could achieve that savings by switching off lights when they weren't needed. Soon after, the company decided to place lights on a single switch to yield further savings, and from there the efforts snowballed as the firm devised increasingly more ambitious energy efficiency goals.

In setting its sights on net zero, the firm identified four major steps to achieve its goal:

1. Measuring and Managing -- "You can't manage what you can't measure," said Bangs, pointing out that Adobe facilities have measurement systems that keep tabs on thousands of data points. In San Jose, alone, information is collected from 30,000 data points.

For example, Adobe had been running the ventilation system in its million-square-foot parking garage in San Jose 24/7. But after monitoring air quality in the facility, the firm decided to run its ventilation fans only when they were needed -- for an hour in the morning and an hour in the evening -- and installed a timer that cost about $250.

3. Generating Energy on Site -- The wind spires in San Jose and the company's investment in Bloom boxes are some of the more visible renewable energy projects at company facilities, Bangs said, adding that Adobe is looking to build on those efforts.

4. Investing in Offsets -- "I know this is a matter of great debate in this community -- is this really helping to achieve carbon neutrality? We're not going to enter in that debate, but we feel it's the right thing to do, so we're purchasing renewable energy credits and verifiable emission reduction credits, for our operations in San Jose," he said.

Bangs also praised Adobe employees for their ideas and efforts to make company operations more environmentally responsible. The firm decided to stop providing water in plastic bottles in response to some criticism about the practice. The day after sending out a notice about the ban to 8,000 employees in North America, Bangs braced for a flood of email. He received just 25 and all of them praised or thanked the company for its decision.

"Employees have made sustainability work at Adobe," he said. "They make net zero possible."