The advantages of 3D printing are still far from circular

Technology advances are fueling plenty of hype, but the sustainability benefits aren’t easy to quantify.

3D printing has been around for three decades, but only in the last few years has the technology become a serious contender for displacing conventional manufacturing methods now that it can achieve material strength that rivals legacy offerings and can deliver parts in a fraction of the time. As these capabilities mature, hopes have soared for 3D printing’s potential to reduce the environmental footprint of multiple products and processes, and even for it to contribute to an increasingly circular economy. But how close are we to such a reality?

3D printing is a process of making three-dimensional, solid objects from a digital file. With additive manufacturing — the formal name for 3D printing — a printer adds successive layers of material only where needed, layer upon layer, until the three-dimensional object is created. Research firm Statista estimates that the 3D printing market will reach $26.2 billion in value by 2022, factoring in revenue not just from sales of printers and materials, but also from software and related services.

There’s been a dramatic change in the technology with the quality of materials rivaling what was previously achievable only with injection molding and machining processes.

The firm helps clients use additive manufacturing to replace and improve their manufacturing operations, and Rassey said there’s been a dramatic change in the technology in the last few years with the quality of materials rivaling what was previously achievable only with injection molding and machining processes. This presents a huge opportunity for companies to rethink how they design and deliver their products, he said, including those motivated by sustainability objectives.

Rassey highlighted the supply chain efficiencies that companies can achieve with 3D printing, which plays directly into a discussion of emissions from logistics networks.

"Throughout human history, we’ve moved parts around the world by ground, air and sea. Now we have a fourth mode: through the internet at the speed of light," he said. By situating parts production close to the end demand, transportation emissions associated with delivering replacement parts can be reduced.

Jeremy Faludi, a sustainable design strategist and researcher, emphasized that this is only part of the equation, and that the reality of what’s happening today is far from circular. After all, we still have to move the creation materials around to production locations.

"Until we’re all 3D printing at home with our upcycled household trash, we’re still transporting something," Faludi said. He also pointed out that when you consider the full lifecycle impact of most products, transportation usually constitutes just a few percentage points of the total. 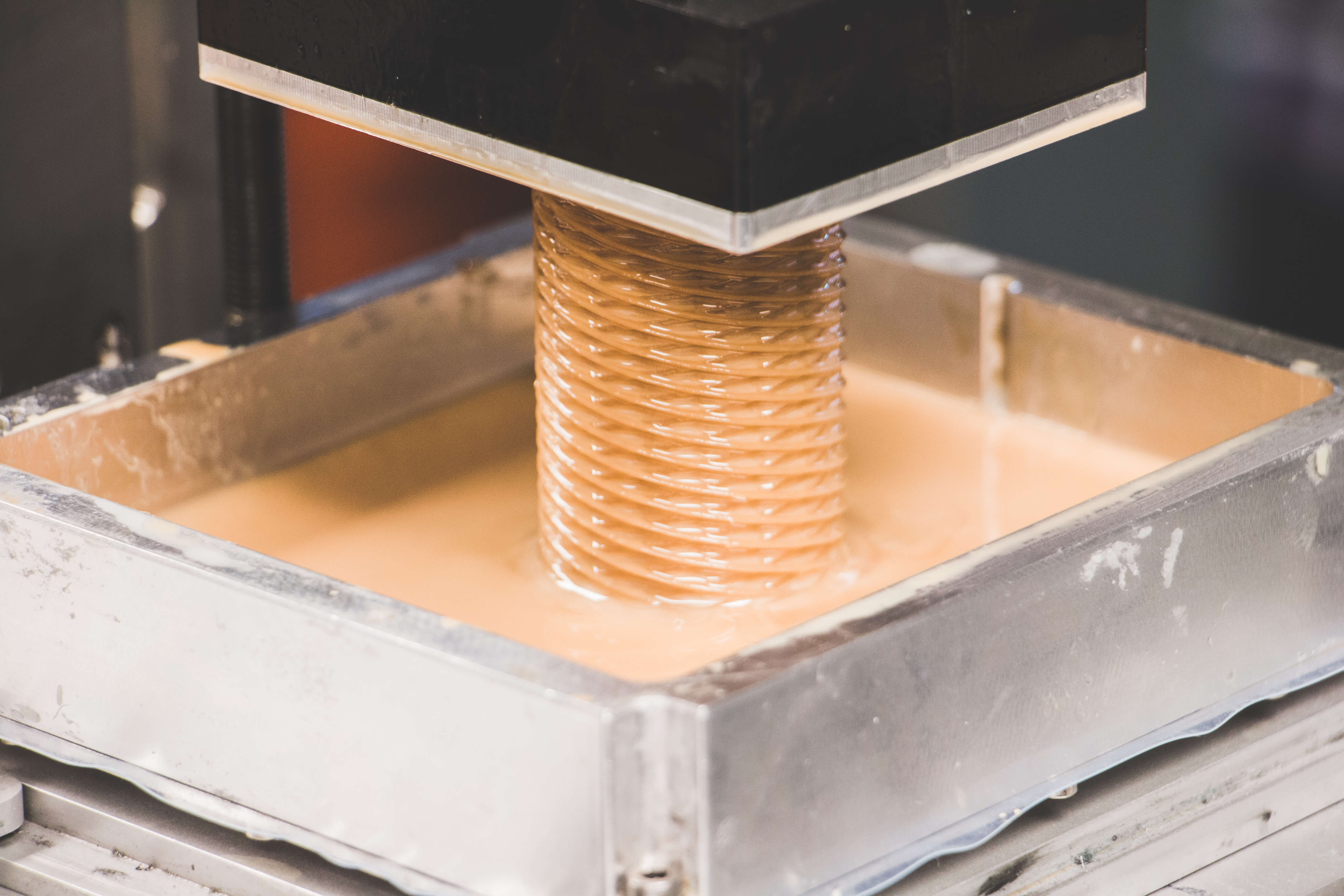 A step forward for energy consumption

Josh Martin, CEO of 3D printing start-up Fortify, highlighted 3D printing’s value in reducing energy consumption. Fortify is a digital composite manufacturing company, and Martin noted that it focuses on providing an alternative to manufacturing processes that traditionally have been quite energy-intensive because that’s where it can make the biggest difference. Fortify makes the 3D printing machines that sit in a manufacturing environment, as well as the materials used in printing. It serves clients in the aerospace, automotive and manufacturing industries.

While measuring a precise footprint "depends on what lens you use," Martin said, the embodied energy of metal ore — a common raw material in conventional manufacturing — is "an order of magnitude" more than that of the bulk polymers that Fortify uses.

For example, melting plastic, a common process in conventional manufacturing, is very energy-intensive. Faludi has developed a new process that successfully has reduced printing energy by 75 percent in preliminary trials. It involves making a paste that chemically bonds at room temperature and ambient pressure. The process then uses pneumatic pressure to extrude that paste, rather than using motors that need electricity.

Faludi, Martin and Rassey all pointed to the energy savings that 3D printing confers in helping to reduce materials use and weight for things such as airplanes and cars. This minimizes the fuel needed to operate the end product and should be considered when evaluating the energy-related impact of 3D printing processes.

3D printing still has a long journey to circularity when it comes to the raw materials it uses. Fortify, for example, thus far has focused on using acrylate polymers that are reinforced with either glass or ceramic fiber. These have less embodied energy than many of their conventional counterparts, but the end product cannot yet be returned to the production loop once its usefulness has been exhausted. That’s because the technology for recycling and reusing these materials is still in its infancy.

At present, grinding up used, 3D-printed parts and using the material again results in decreased strength and performance. Indeed, according to Faludi, one of the biggest 3D printer manufacturers in the world won’t use recycled plastic inputs because they don’t meet quality requirements. Of course, the paper industry faced a similar challenge 15 years ago, and now there’s almost no detectable difference between virgin and recycled paper products. Faludi reckons the issue with plastics is "amenable to technical fixes."

Rassey also feels "reasonably optimistic" that this hurdle can be overcome. He noted that some biodegradable filament options have better recyclability properties, for example. Rassey contends that the market is demanding better recyclability options, and that it’s an area that needs further investment.

Using organic raw materials is another promising avenue for 3D printing circularity, in that they can be composted back into the production cycle. Faludi said he has obtained extremely promising results using ground-up pecan shells, which reduced embodied material impacts by 82 percent.

That said, Faludi cautioned that he has had trouble replicating those results with subsequent batches of material, which highlights how critical a reliable supply chain is to scaling up any such process.

Until we’re all 3D printing at home with our upcycled household trash, we’re still transporting something.

Faludi has experimented with all sorts of other organic materials, including sawdust, rice flour, orange peels and ground-up oyster shells. Other low-impact, abundant, non-toxic materials such as mica also have the potential to significantly reduce the overall environmental footprint of production processes, even though it’s not clear how they could be part of a closed loop, he said.

"In theory, there are no limits on what these things could be printed into, if we can get the mechanical strength up," Faludi explained. "We’ve achieved strengths that are comparable to concrete, but we haven’t yet managed to catch up to ABS plastic."

Acrylonitrile butadiene styrene (ABS) plastic is a common thermoplastic polymer typically used for injection molding applications. It’s popular because of its low production cost and the ease with which it can be machined.

Fortify might be able to help with that. "One of the reasons we find bio-available polymers interesting is that we don’t rely on polymers alone for strength," Martin said. "That’s the beauty of composites. We can use our reinforcement technology to strengthen lower-strength products." Fortify also sources scrap carbon fiber in some of its materials, thus making use of a waste product from another industry.

While the theoretical environmental advantages of 3D printing are clear, little work has been done to quantify the actual benefits of specific processes or materials.

"Most people are making cool, promising stuff and assuming their sustainability," Faludi said. "For the most part, they’re not measuring the mechanical properties of their materials."

He is working extensively to quantify the environmental impact and benefit of these processes, and thinks that practice needs to be a lot more common if 3D printing is to live up to its sustainability potential.

Fortify is working on the precise calculations to compare its products’ carbon footprint to legacy alternatives. It has a ballpark idea, though. According to Martin, "If we had 30,000 Fortify units in circulation with expected material utilization rates, we’d get somewhere around four to five gigatons of prevented carbon dioxide emissions." Considering that Fortify printers’ use depends substantially on the end client’s needs, it remains to be seen how the company will quantify this with precision.