How many Amazon packages were rapidly shipped to your home this week thanks to Black Friday and Cyber Monday?

For many of us, plenty. And those big cardboard boxes with tiny items inside are just one of the more visceral problems associated with the rapid rise of on-demand online shopping.

The carbon emissions associated with e-commerce shipping — which largely come from fossil fuel-powered trucks and planes that move goods across states and within cities — are growing rapidly. And many of us are starting to actually become a lot more concerned about it.

According to a study from Accenture published in October, half of the respondents said that they would opt for delivery options with a lower environmental impact, such as slower shipping or in-store pick-up, because of the negative environmental effects of fast-shipping options. Companies such as Etsy have experimented with ways to nudge buyers to use lower-carbon ways to ship goods, but messing with users' streamlined check-out carts is tricky.

But no matter how much advance planning you're doing for your holiday shopping (slower shipping generally means lower emissions), at the end of the day it's not really a problem that buyers can tackle on their own. "It’s not on consumers to investigate every decision of their lives and weigh the environmental impact. Leadership needs to come from companies," said Aileen Nowlan, senior manager for the Environmental Defense Fund, in an interview.

Thankfully there's some good news on that front, too. Expect 2020 to be a big breakout year for shining a spotlight on the shipping supply chain for moving e-commerce goods from where they were produced to your front door — across seas, roads and air.

In particular, the last mile of that route is ready for change now. EDF just started a campaign to collect signatures and put pressure on the last mile of the shipping supply chain, where delivery trucks owned by companies such as Amazon, UPS, DHL and FedEx slowly move through neighborhoods, idling, blocking traffic and dropping off your packages. 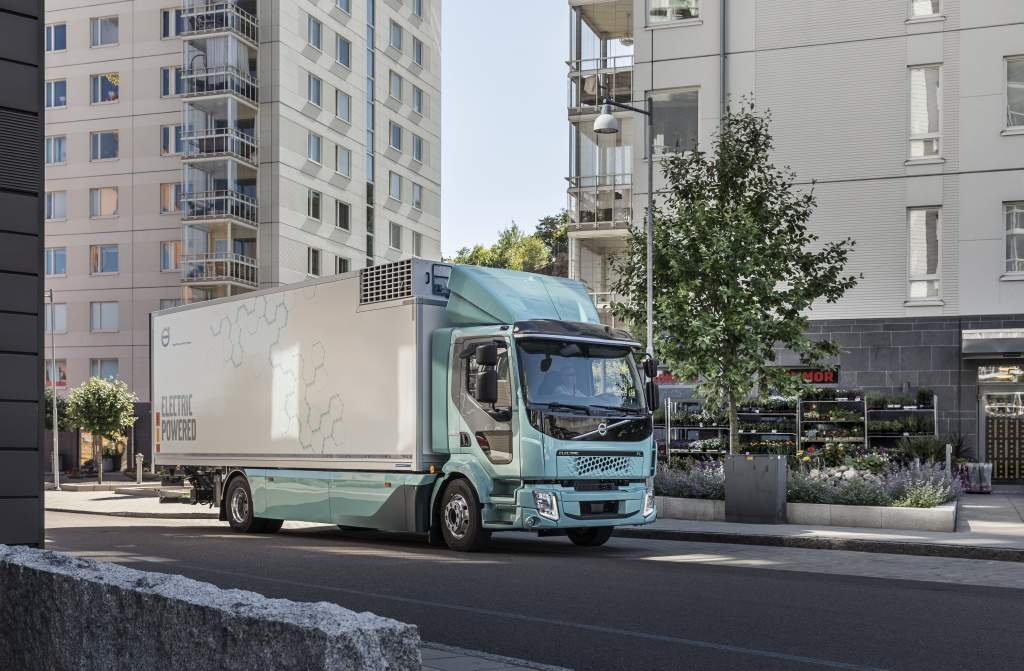 Many of these shippers are starting to buy electric delivery trucks in greater numbers. In the biggest move, Amazon plans to buy 100,000 of them from a startup called Rivian, representing the world's biggest order for electric delivery vans.

While startups have dominated manufacturing these electric vehicles in small volumes, more of the big automakers finally are getting their act in gear. For example, Volvo Trucks just started selling its FE (shown above) and FL electric trucks in larger volumes across cities in Europe. Next year, Volvo Trucks North America will start commercially selling its VNR electric truck in the United States.

Cities in Europe — such as London, Berlin and Madrid — are driving those sales with strong regulations looking to phase out diesel and fossil fuel vehicles from city centers. Paris Mayor Anne Hildago recently said that she intends to charge companies such as Amazon for urban deliveries to offset the ills it creates such as congestion and pollution.

In the United States, with fewer city and state regulations around low-carbon urban delivery, it's more about "strong customer requests for socially responsible products," said Brett Pope, director of electric vehicles at Volvo Trucks North America, in an interview.

But in California, cities are getting ambitious, too. Last week, Los Angeles released one of the most aggressive low-emissions urban transportation plans in America, pledging to dramatically boost the amount of electric passenger cars, buses and electric vehicle chargers, while investing in public transportation and exploring congestion pricing.

If 2020 is the year that the spotlight starts to shine on the emissions from last-mile delivery, cities will be the ones controlling the illumination.