The Agony and the Ecstasy of Newsweek's Green Rankings

Newsweek's third annual Green Rankings are out today, and the stories and chatter they’ll generate will likely be of the horserace variety: who won, who lost, who moved up or down from the year before, how competitors compare. Fair enough: That’s what annual rankings are all about.

But those stories will largely miss the mark. This year’s rankings are a reboot from previous efforts, and that makes meaningful comparisons difficult. And while it’s not exactly comparing apples to oranges, comparing this year to last may be akin to comparing Golden Delicious to Granny Smiths.

To get it over with, here are the leaders: The top 10 U.S. companies are IBM, HP, Sprint Nextel, Baxter, Dell, Johnson & Johnson, Accenture, Office Depot, CA, and NVIDIA.

On the global rankings, the top 10 are Munich Re, IBM, National Australia Bank, Banco Bradesco, Australia & New Zealand Banking Group, BT Group, Tata Consultancy, Infosys, Philips Electronics, and Swisscom. For those keeping score, that represents one company each from Brazil, Germany, the Netherlands, Switzerland, the U.K., and the U.S., and two each from Australia and India.

So much for the horserace. Here are some basics and some context: Newsweek, in partnership with Trucost, Sustainalytics and a board of advisors (listed here), assessed the 500 largest U.S. and global companies to create a “green score,” derived from three components:

What’s changed? Newsweek — which itself went through two management handoffs during 2010, ultimately merging with the news and opinion website The Daily Beast — revamped its methodology. Specifically:

True, most of these technical details will matter primarily to sustainability geeks — socially responsible investors and analysts, and the like. And, of course, to the companies themselves.

The upshot of all these changes is that Newsweek seems to have set a course for the future, an improved methodology that should sharpen scores and enhance comparability going forward. “People want to be able to compare year to year, for good reason,” Ian Yarett, the Newsweek editor who headed up the project, told me. “Up until now, we haven’t really been able to deliver on that. Starting this year, regardless of how your rank changed, you’ll be able to see how the actual performance that’s factored into that rank changed.”

The tweaked methodology will confound some companies. While the top and bottom of the list look roughly the same — 5 of this year’s top-10 companies are the same as last year, as are 6 of the 10 lowest-ranked companies — several companies’ scores changed dramatically, not always for obvious reasons. Indeed, there were some substantial come-downs: Coca-Cola, Eaton, Johnson Controls, Nike, and — especially — Pacific Gas & Electric, which dropped more than 300 places.

Nike’s fall — from #10 in 2010 to #243 this year — was perhaps surprising given its apparent environmental leadership on a number of fronts. Nike got dinged this year in three ways, according to Dr. James Salo, Senior Vice President, Research Strategy at Trucost. "Nike rates somewhat poorly in disclosure, and this replaced what was a very good reputation score, which skewed last year's results in their favor due to z-scoring which is no longer being used as a technique," he said, referring to a common technique for normalizing data. "We also learned that their footprint is slightly larger than we were aware, as they outsource more than we knew before," noting that last year Trucost ranked Nike only #164 out of 500 on the Environmental Impact portion of the rankings. Moreover, says Salo, Nike fell relatively from Sustainalytics’ perspective, compared to MSCI’s analysis last year, which had ranked the company highly. “Sustainalytics has them scoring well, but not as dramatically off the charts." 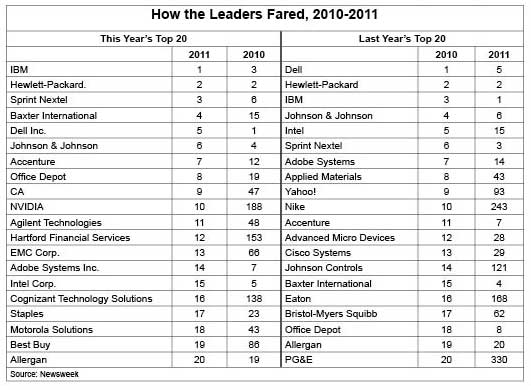 The public won’t likely be bothered with such explanations, looking only at the outcomes, but the affected companies surely will. Newsweek’s rankings seem to have ascended to the top of the list of measures many executives watch closely. Some months ago, I asked a group of sustainability leaders from large companies that belong to the GreenBiz Executive Network if they could recite their company’s Newsweek ranking. Pretty much everyone knew it by heart.

Why is that? I suspect it’s not just the rankings’ rigorous methodology, their credible and comprehensive data partners, or that the rankings cover more companies more consistently than anything else. It’s also the broad reach of Newsweek itself.

Just ask Dan Hesse, CEO of Sprint Nextel, #3 this year in the U.S. rankings (up from #6 in 2010, and #15 in 2009), who describes himself as “a big Newsweek reader forever.” Last week, in anticipation of this year's release, I asked him to assess the importance of Newsweek's rankings. “There are other recognitions that are well known in the green community and every bit as important,” he said. “The thing that’s great about Newsweek is that it’s so widely read that it helps get our message out to a broader audience, particularly our 52 million customers.”

For companies like Sprint, a high ranking represents validation from a credible external source. “To be in the top 10 verifies all the hard work that we’re putting in, internally to our employees and externally to our customers,” Hesse said. “My competitors see this as something we can crow about, and they hate that.”

What about shareholders? There’s a growing case they, too, should crow. "Companies that ranked in the top 100 of the 2009 ranking, weighted equally, outperformed the S&P 500 by 4.8% over the last two years, Cary Krosinsky, Trucost’s Senior Vice President, North America, writes in an article accompanying the Newsweek rankings. Stocks of leading companies, he says, are collectively up 15.2%, compared to 10.4% for the overall S&P 500. He cites the company that this year ranked #1 in the U.S. and #3 globally:

An example of such a company is IBM, whose stock is up over 100% over the last 5 years, while the S&P 500 has been flat. IBM is a poster child for a company evolving with the times — first from hardware to software, and now through sustainability solutions across energy and water efficiency, smarter cities, etc., as categories of opportunity to drive future revenue. IBM not only looks for such environmentally focused revenue opportunities, they are also now demanding environmental reductions from their suppliers.

To be sure, correlation doesn’t suggest causality, though Krosinsky’s article points to other studies showing the financial outperformance of sustainability leaders. Ironclad or not, it’s hard to ignore the evidence.

What would MLK have to say about sustainable business?