Even in the old normal, the healthy $100 million investment disclosed this morning by agtech startup Pivot Bio — which hopes to disrupt the $65 billion global market for synthetic nitrogen fertilizer — would be impressive. Given the current economic climate, it's another sign that interest in climate tech is prevailing during the coronavirus crisis.

The Series C round was co-led by return backers Breakthrough Energy Ventures, the fund most visibly associated with billionaire Bill Gates, and Singapore-based investment firm Temasek; it brings the company's total backing to $186 million. The infusion will support the company's strategy to scale its microbe-fueled approach for boosting crop yields beyond its initial sales to corn farmers into other cereal crops, such as wheat, as well as into international markets, starting with Argentina and Canada.

Pivot Bio's microbial nitrogen technology uses a biological approach to "reawaken and rediscover" microbes in soil, so that farmers don't have to apply as much synthetic nitrogen fertilizer. "The microbes in the soil can already do this; we just have to figure out how to wake them up," Pivot Bio CEO Karsten Temme told GreenBiz.

The microbes in the soil can already do this; we just have to figure out how to wake them up.

Interest for its initial product, Proven, was "far beyond" the company's expectations fueled by farmers' growing interest in improving resilience for agricultural land while reducing the environmental of crop production, Temme said. The technology sold out for both seasons it has been available and is available on "hundreds of thousands" of acres of U.S. corn crops.

The company already claims some pretty impressive benefits for Proven: It can provide a "5.8 bushels per acre advantage" compared to fields using just synthetic fertilizer, while simultaneously reducing carbon dioxide and nitrous oxide emissions, as well as runoff of water-borne nitrates. The Berkeley, California-based company employs about 100 people in labs in locations including Boston, St. Louis and Hayward, California. 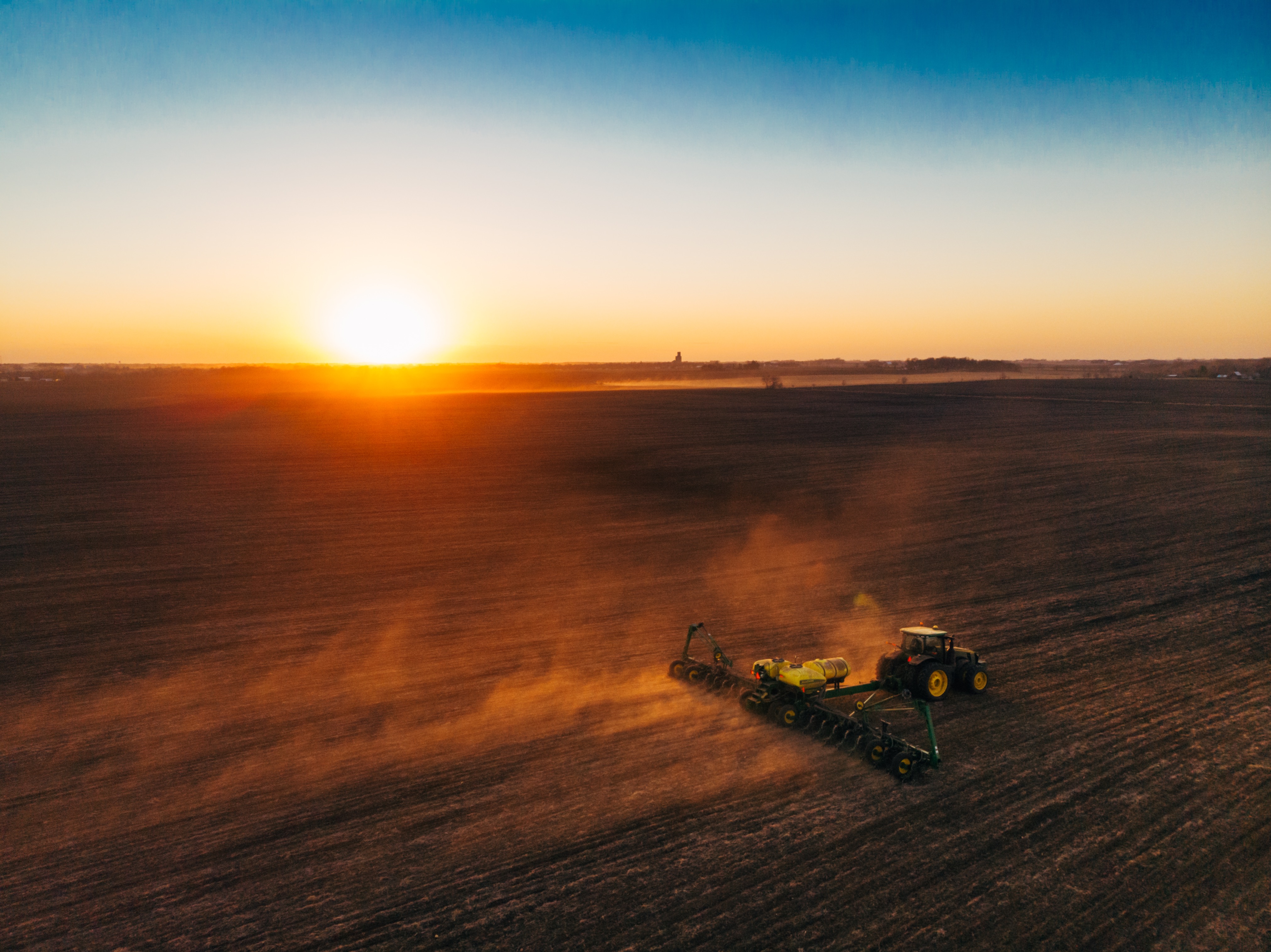 Beyond the Pivot Bio deal, I’m aware of at least four other appreciable funding rounds (near $10 million or above) disclosed in the second half of April. Here’s a quick rundown:

What drives climate tech entrepreneurs? Several weeks ago, while I was reporting last week’s feature on climate tech, I interviewed the CEO of Hypergiant Industries, the artificial intelligence company behind the Eos Bioreactor, a system that uses algae to sequester carbon dioxide. Hypergiant was planning a big splash for the technology during March, as part of its campaign to encourage commercialization.

"This device is one of our first efforts focused on fixing the planet we are on," said Hypergiant CEO Ban Lamm when his two-year-old company first started chatting about the bioreactor last fall, in the press release for its launch. "We hope to inspire and collaborate with others on a similar mission."

Hypergiant isn’t your typical climate tech startup — much of its AI consulting is focused on aerospace, healthcare and defense applications for Fortune 500 companies and government agencies. It’s backed by organizations including Perot Jain and Sumito.

The bioreactor actually started as kind of a pet research and development project and grew into something more as Hypergiant’s team began thinking more deeply about the role of businesses of all sizes in addressing the climate crisis, Lamm told me. That led the company to bring on scientist Bill Nye as an adviser for its climate-related solutions work in June.

The current design for the bioreactor — which measures 3 feet by 3 feet by 7 feet — could find its way into commercial office buildings. Think of it as an air purifier that also happens to sequester the carbon dioxide that normally would be pushed out by a traditional heating, ventilation and air-conditioning system. The newest edition is outdoor-rated, and Hypergiant is talking with city planners about potential applications.

"We don’t have the power to make the General Motors of this world change their emissions, but I can find ways to help them be more efficient," he said. "If we just play our part, we can make a big difference."

When I chatted with Lamm several weeks ago, he was optimistic about launching the technology in a bigger way this year even though the pandemic will set those plans back by at least several months. 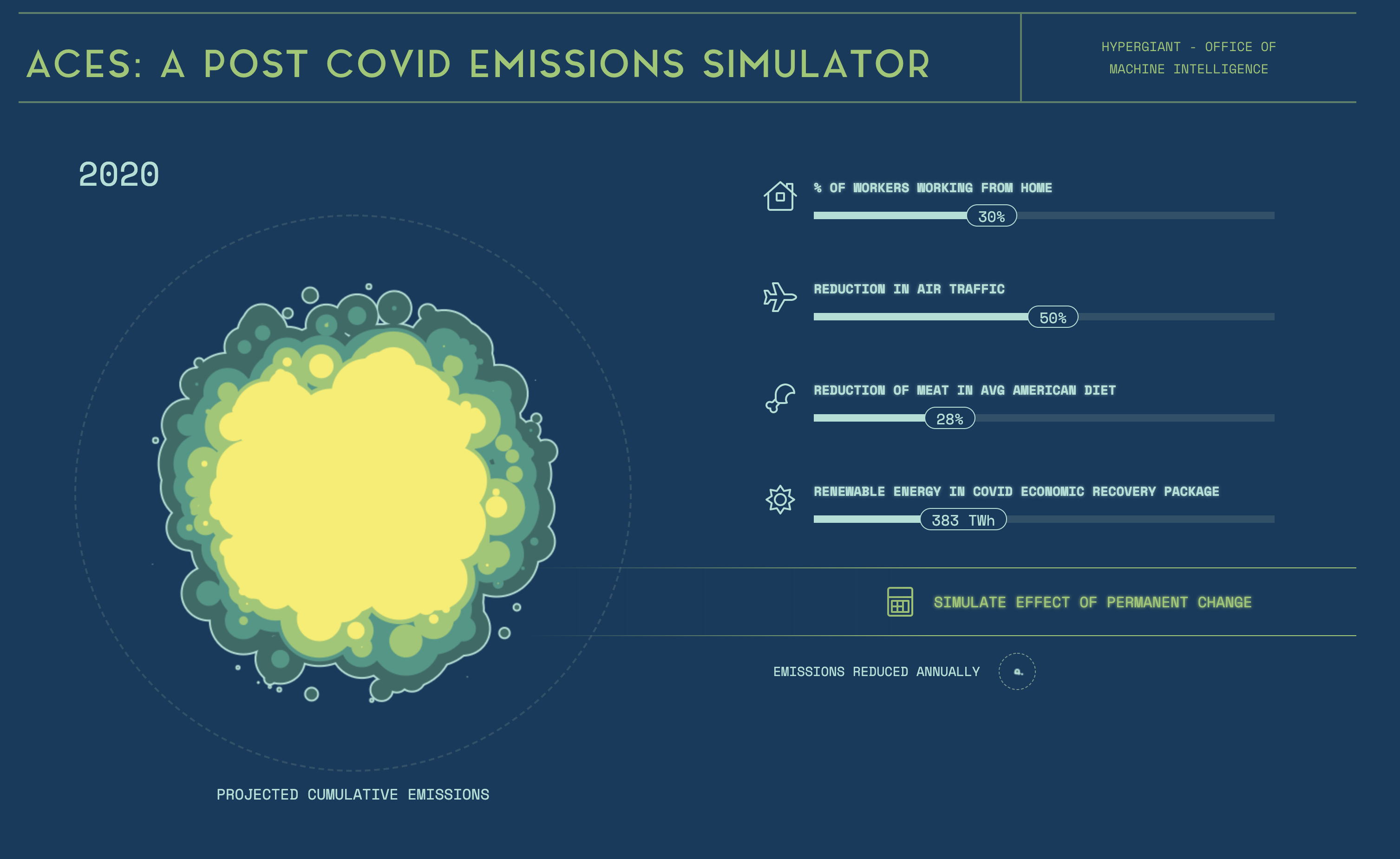 Meanwhile, the COVID-19 situation also prompted a new project that the startup hopes will stoke more interest in how to emerge from the pandemic with better climate-action strategies in place.

This week, Hypergiant launched a modeling tool called ACES (short for After COVID-19 Emissions Simulator). The mission: help organizations better understand the impact of worldwide shelter-in-place-measures. While many have been cheering the dramatic decrease in emissions, Hypergiant doesn’t want people to be lulled into thinking that it’s time to relax efforts to draw down atmospheric carbon dioxide.

With that in mind, the tool uses information from the Environmental Protection Agency and Energy Information Administration to show things such as: the potential long-term effect of making certain changes (such as telecommuting) more permanent or the effect that using certain technologies (maybe carbon capture devices such as its own bioreactor) could have.

"The website will be continuously improving through new data inputs, including understanding and experimenting with a variety of investments in technology and behavioral changes," the company notes. "Hypergiant hopes to encourage governments, cities and citizens to consider committing to the maintenance of some quarantine practices once social distancing and shelter-in-places are put at a halt."

Sip or guzzle? Here's how Google's data centers use water

Why Amazon is putting $53 million toward climate funding for women