The algae industry is getting ready for prime time.

This crucial industry has the potential to address many challenges facing the world today — it can fuel airplanes and land vehicles, recycle carbon, provide nutrition for animals and people and create jobs for millions of Americans. Substituting algae for palm oil would go a long way to stopping deforestation, for example.

By a wide majority of 75 percent, the industry continues to believe algae-based fuels will reach price parity with fossil fuels by 2020, as they have in the last three annual surveys.

And while 91 percent of algae fuel producers say the biofuels will cost less than $5 a gallon by 2020, 48 percent say the cost be under $3 a gallon by then.

As for algae products such as feed, food, plastics and chemicals, the industry is close to unanimous that they will be commercially available and price competitive by then.

More than 70 percent expect to increase production and hiring this year and 89 percent of employers say consistent, supportive federal government policies would accelerate this growth.

"The results broadly show an industry that continues to grow; from increased production of biomass and oils, to increased hiring, to a wider variety of end products," said the Algae Biomass Organization.

The first building to be covered in algae is in Hamburg, Germany. The algae creates fuels to heat the building, provide shade and muffle street noise. 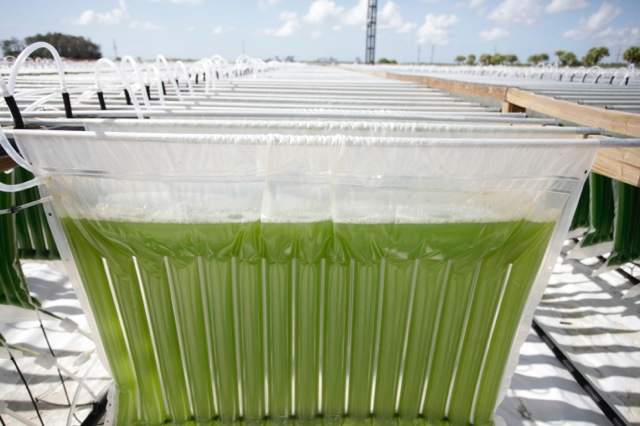 Algenol
Algenol's technology transforms algae into ethanol.
Last year, the industry made widespread progress on both research breakthroughs in yields and algae biology, and on commercialization, with several companies opening or continuing successful operations at pilot or commercial scale facilities, they said. The two biggest companies are Sapphire (New Mexico) and Algenol (Florida).

Research shows the most productive places in the U.S. to grow algae, and a standard platform for evaluating strains has been developed.

While funding for research and development are still needed, what's most essential is support for commercialization — tax incentives and credits, and the Renewable Fuel Standard.

The industry needs a Manhattan Project to scale commercialization, said the National Algae Association, it's no longer science that's holding it back.

It takes 29-33 pounds of carbon dioxide to produce 1 gallon of algae fuel, said Sapphire, and being able to capture carbon emissions from power plants can make it or break it for the industry.

For that reason, the industry wants official recognition in EPA's Clean Power Plan, which provides a menu of options for how states can cut emissions. But so far, the EPA doesn't include reuse as a solution — only capturing carbon and burying it underground.

To us, the prospect of capturing the carbon and turning it into new products makes much more sense — and utilities would be able to sell the carbon — rather than paying exorbitant fees to pump it underground.

This article first appeared at SustainableBusiness.com.

How Codexis Aims to Stand Out from the Biofuels Startup Crowd

A carbon-negative economy: A practical prospect or a pipe dream?