All natural? These fracking byproducts could fight water scarcity

One of the biggest freshwater reservoirs in the world is, literally, up in the air.

Between 6 and 18 million gallons of freshwater hover above every square mile of land, not counting droplets trapped in clouds. Scientists realized this centuries ago but they never have quite figured out how to bring the water down to earth. The effort required to condense it would consume such vast quantities of energy that it always has appeared to make any effort to capture and use this water uneconomical.

But while studying this topic, two of my University of Texas at Austin colleagues and I came up with a concept that might just work: that of using the natural gas that is otherwise flared from oilfields to harvest atmospheric moisture.

We haven’t given it a try yet but we believe it has the potential to be practical and economically viable, especially as water gets scarcer and more expensive. What’s more, the latest research about the extent of natural gas methane leaks and greenhouse gas emissions underscore why it is important to give this technology a shot.

Let there be water

Here’s how the process would work. Excess gas that otherwise would go to waste could power an engine of a big refrigeration unit. This industrial-scale refrigerator would swallow lots of humid air, condensing this moisture into water much like how the air conditioning systems operate in office and residential buildings.

The amount of water that could be collected would depend on the quantity of natural gas available, the weather and the refrigeration system’s efficiency. We project that for every cubic meter of gas, this process will capture up to 2.3 gallons of water. 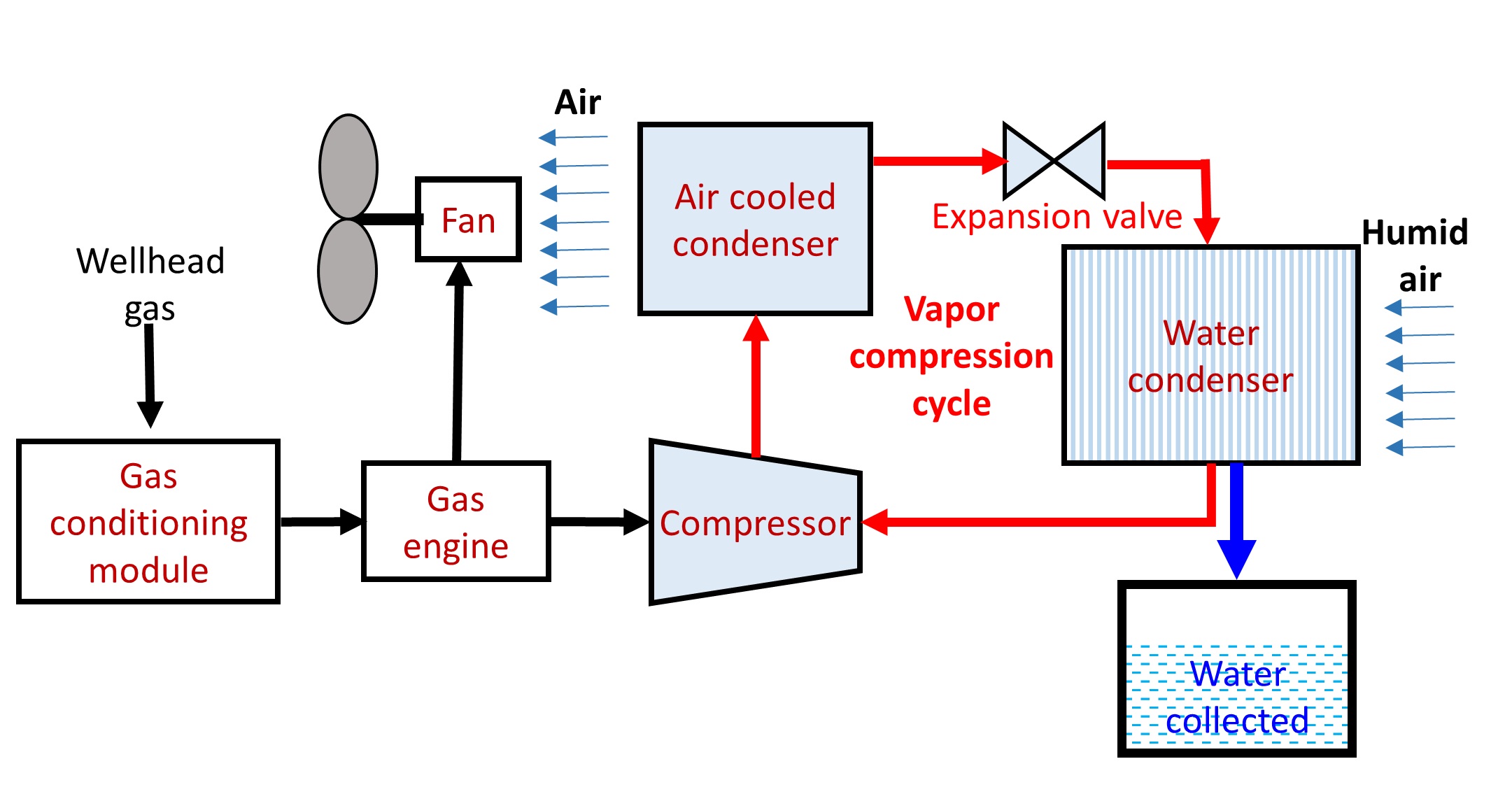 By using flared gas to power refrigeration, water can be harvested from the air. Vaibhav Bahadur

There are many uses for this water, which we believe would be fit for human consumption, including food processing, mining and other industries. I see many benefits to this approach to oil production, which is very water-intensive.

Drilling for oil and natural gas with hydraulic fracturing, a technique commonly called fracking, takes lots of water. On average, one well requires 2.5 million gallons of it, enough to fill four Olympic-sized swimming pools. And more than a million of these wells are in the U.S. alone.

Yet about half of the nation’s wells are in parched areas in Texas and other southern states.

And there are some oil patches, including the Eagle Ford in Texas, where water scarcity is making it challenging to produce oil.

Drilling sites are often remote, meaning frackers must haul water to wellpads in hundreds of trucks that have to travel 50 miles or more.

I have calculated that tapping excess gas to capture water would provide one-fifth of the water used in fracking the parched Eagle Ford Shale region in South Texas.

A waste of energy

Worldwide, about 4 percent of the natural gas extracted from oil and gas fields gets flared, and this practice is common in the United States. Add all this up, and it paints a disturbing picture of global waste and environmental pollution.

And we cannot see any environmental downsides to giving it a try.

It has to be hot

This technique would not work in many cold and dry places. It would work best in areas that are hot and humid, including Texas and other southern states in the U.S., Mexico, Venezuela, Middle East and Africa year-round. And it might be viable for about half the year in cooler gas-producing oil patches such as North Dakota’s Bakken Formation.

Interestingly, many regions with ample natural gas reserves have perpetual water scarcity and hot, humid climates. Examples include countries in the Middle East and Africa, the American Southwest, Mexico and Venezuela.

There have been efforts to stop wasting the natural gas produced as a byproduct of oil drilling before. But when oil producers have sought to capture and sell the fuel, rather than flare it, they have mostly failed because they have been economically unviable.

I believe that this new approach would work better than mandating or encouraging the capturing of natural gas for other uses because it is easier to pull off. It also solves a separate problem at a time when water is becoming an increasingly valuable and scarce commodity.

Other efforts to condense water in the air are underway. For example, table-top atmospheric water harvesters powered by electricity are available for sale. This idea to do it on an industrial scale, therefore, is not as far-fetched as it may appear.

University of Texas at Austin

Startup tests approach for squeezing water out of thin air

Tapping into Nature: Wising up to water innovation