The aluminum can: America’s most successful recycling story that you’ve never heard

On America Recycles Day, it's time to recognize one special piece of packaging.

Chances are that you’ve held an aluminum can dozens of times and have never thought about how many times the material in your hands has been recycled. The aluminum beverage can is the most recycled drink package in the world, and in the United States, we’ve come to take the circularity of the aluminum can for granted.

There are lessons from the can’s success story that can be applied to those industries looking to adopt more sustainable packaging.

The most recycled beverage container in the world

In the United States, a staggering 105,784 aluminum cans are recycled each minute — leading to an overall recycling rate of nearly 50 percent, the highest recycling rate for any beverage container. Additionally, due to the infinite recyclability of aluminum, 75 percent of all aluminum produced is still in circulation. And that cold aluminum can your holding? It contains an average of 73 percent recycled content (PDF), which means there a lot of can-to-can recycling is taking place. Making a can from old cans uses 90 percent less energy and generates 90 percent less emissions compared to producing that same can from virgin material.

The beer brand that made it happen

One man’s persistence and belief in corporate responsibility before the term was even invented is how the aluminum can became a favorite packaging material for beer and soft drink makers. In the late 1940s, most major breweries used tin cans. Unfortunately, by the 1950s, neighborhoods were littered with tin cans; an environmental movement coalesced to "Ban the Can." At this point, William Coors, grandson of the Adolph Coors that founded Coors Brewing, began searching for a better package.

In a 2012 interview series, Coors said: "What we were doing was looking for alternatives. It [the aluminum can] made some sense. Because there would be enough intrinsic value in the aluminum can that people would pick it up and recycle. So it seemed to be the logical solution. ... As soon as we got it going, we began to think about recycling, reclaiming [the can]. So we started giving one penny a can in our market. Then, we had cans just coming in."

One man’s persistence and belief in corporate responsibility before the term was even invented is how the aluminum can became a favorite packaging material for beer and soft drink makers.

Besides creating the "Cash for Cans" program, Coors also required that all of their distributors have a place where customers could bring cans back. 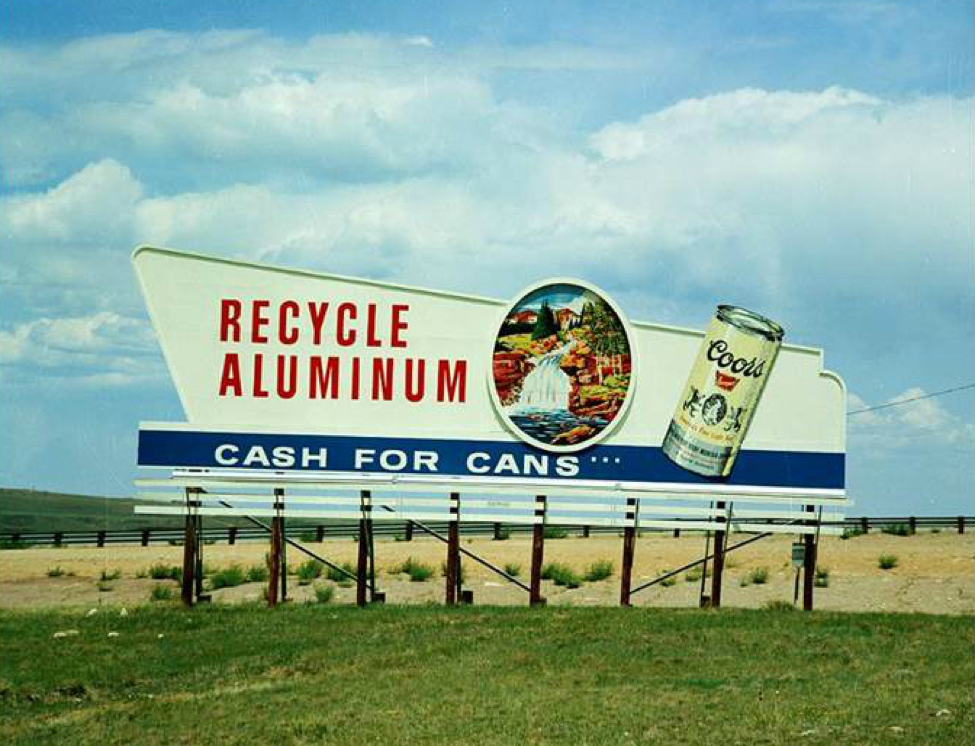 At this point, Coors was also chairman of the Can Manufacturers Institute (CMI), the trade association for the metal can manufacturing industry and partners in the U.S. Coors strived to flip industry policy, which was dead set against having anything to do with used containers. "At that point, I wanted to get the industry to maintain ownership of the cans — almost like a returnable bottle. Again, we got a lot of flak," Coors said in a 2001 interview with the Lifestyles of Health and Sustainability Journal.

Even with the rest of the industry’s reluctance to support responsibility for its packaging, by the 1970s, breweries switched to aluminum due to consumer demand. Aluminum was an improvement from steel-lined tin cans, as there was less alteration in taste as well as no leakage during transport. Aluminum cans also were lighter and therefore less expensive to transport than their tin equivalents.

The beverage industry never adopted the industry-wide takeback program that Coors had envisioned. Still, in the present day, bottle deposit laws have put a value on cans and other beverage containers. While not everyone in the recycling and private sector is a fan of deposit bills, they have proven an effective lever to get cans back. "The 10 U.S states with deposit systems for beverage containers represent about a quarter of all beverage consumption and account for more than one-third of all cans recycled each year," noted Scott Breen, vice president of sustainability at CMI.

Most cans recycled in the United States get turned into new cans. If not turned into new cans, used beverage cans (UBC) are also used to make products in the transportation and construction markets. "Ultimately, all UBCs that the industry gets back are recycled into useful, recyclable products, mostly new cans. And you can repeat this process over and over again in a true closed loop," says Matt Meenan, senior director of public affairs at the Aluminum Association. "The aluminum beverage can is a textbook example of the circular economy in action."

The beverage industry never adopted the industry-wide takeback program that Coors had envisioned. Still, today, bottle deposit laws have put a value on cans and other beverage containers.

Notwithstanding the high collection rates and strong demand for aluminum domestically, the amount lost to landfill is still staggering. Each year, the United States loses 45 billion cans to landfill, the equivalent of 11 12-packs per person. These landfilled cans represent $800 million worth of material.

"The can is collected in every recycling system and is 100 percent recyclable, but we strongly believe the packaging conversation needs to go beyond collection and recyclability," Breen says.

While there’s still a ways to go to fully close the loop on circularity, the progress is hopeful.

As with any packaging material, aluminum is not perfect. Extracting bauxite, the primary source of aluminum, requires open pit mining. This mining entails a significant environmental footprint. Moreover, as recent studies analyzing the environmental implications of brands switching from plastic to aluminum in packaging have shown, aluminum may not always have a lighter footprint once all logistics factors are accounted for such as distance needed for transport, temperature parameters and handling.

As we celebrate America Recycles Day on Friday, we also should celebrate the persistence of one individual in starting one of the most circular packaging solutions in the world. William Coors was a business leader who embraced responsibility for the end of the life of his product, was willing to help fund the exploration and development of alternatives, and even went against his own industry in the creation of his take-back program. Sixty years later, his style of leadership still seems ahead of our time. Here’s to seeing more private sector leadership in this vein.

The Aluminum Can was selected as the winner in the Scale B2B category for the UPcyclers Network 2019 Product Awards.

See all by Gina Lee