The web services arm of the largest online retailer in the world teams up with Dominion Virginia Power to power data centers.

DVP provides retail electric service to Amazon’s northern Virginia data centers that power the AWS Cloud. But Amazon also has signed a number of wind and solar deals in the region that participate in the PJM wholesale market (the regional transmission organization that coordinates the movement of wholesale electricity in the area). Through an energy management services agreement, DVP may provide PJM-related services to AWS. Such services will assist in the integration and administration of its renewable portfolio in the market.

This agreement gives flexibility to utilities to do their job in maintaining the grid, while also ... removing barriers to going 100 percent renewable.

"This is a turning point in the electricity industry," said Hervé Touati, a managing director at Rocky Mountain Institute (RMI) and head of the Business Renewables Center (BRC), which streamlines and accelerates corporate renewable energy procurement and of which Amazon is a member. "By offering these services to Amazon to help the company manage its purchased power, DVP is ... working directly with a corporation like no utility has done before."

DVP controls the entire flow of electricity, from generation to meter, for its retail customers such as AWS. DVP is a fully integrated utility, that either self-generates and/or purchases electricity from others, and distributes it to its customers at a retail price approved by the Virginia State Corporation Commission (SCC). This includes selling the electricity to AWS for its data centers in northern Virginia.

AWS has signed power purchase agreements (PPAs) that enable four utility-scale renewable energy projects to be built in the Eastern U.S. In the past, the electricity generated through these renewable projects was fed into the regional grid and earned the PJM wholesale market price. Meanwhile, AWS data centers in Virginia consumed energy from another part of the same grid paying retail rate of electricity based on DVP’s power mix. DVP’s power mix today includes generation from both renewable and fossil fuel sources, but the ratio does not enable AWS to meet its ambitious renewable energy goals.

According to AWS, through this new agreement with DVP, which was approved by the SCC, AWS may contract for and DVP may perform specified energy management services to administer the scheduling and settlement activity related to AWS’s wholesale market participation of AWS’s investments in its wind and solar projects, including any future Amazon contracts for renewable energy projects.

Under a separate agreement, also approved by the SCC, AWS also will pay a market-based retail rate that closely matches the wholesale market rates its renewable energy projects earn. DVP wants to work with Amazon to provide more choices and accommodate its renewable energy goals and requirements.

This arrangement provides AWS with a one-stop-shop to complement AWS's traditional electricity management with wholesale and renewable energy purchases. 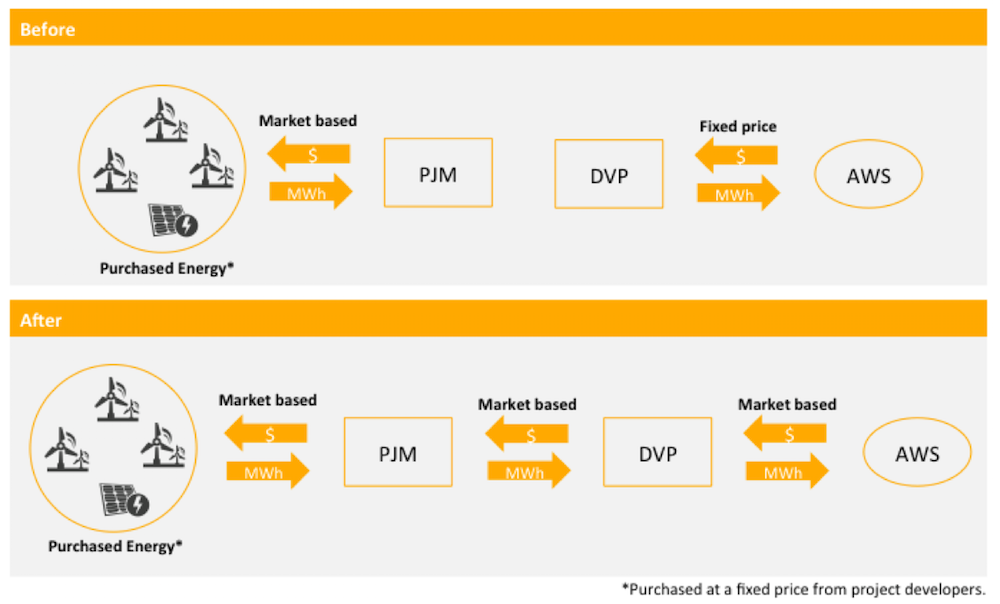 This unique arrangement is another successful innovation on green tariffs that have started to emerge around the country.

Utilities such as DVP traditionally offer similarly situated customers the same electricity for the same price, and traditionally this has been through fixed, low variable retail rates. However, DVP is responding to the desires of certain customers to provide additional choices to more specifically address the kinds of renewable energy options they want.

This arrangement allows DVP to accommodate AWS’ renewable energy commitments without shifting costs to other customers. Most important, it helps AWS bring renewable energy to the same regional grid that supplies its data centers in Northern Virginia, meaning AWS can reach its ambitious sustainability goals while encouraging local economic development.

"With this agreement Dominion is evolving its business model and putting its customer first," said Letha Tawney, director of utility innovation at World Resources Institute. "This unique agreement shows the importance of corporations working with utilities to come up with solutions to their goals."

"Amazon, an active member of ACORE’s U.S. Partnership for Renewable Energy Finance (US PREF), pledged in 2014 to go 100 percent renewable. Today it is making that pledge real by developing and integrating large amounts of renewable power onto the grid. This agreement gives flexibility to utilities to do their job in maintaining the grid, while also emphasizing the benefits of carbon-free energy and removing barriers to going 100 percent renewable. Amazon and Dominion are at the leading edge of clean energy development and together they are proving the economic and environmental value of corporate investment in renewables."

At the end of 2015, renewable energy supplied 25 percent of AWS’s global infrastructure demand, and the company wants to increase that to 40 percent by the end of 2016.

It’s also a great move for the Commonwealth of Virginia, paving the way for the state to win new data center business.

"Our new contract with Dominion is yet another significant milestone that together with our various wind and solar projects, the many efficiency innovations in our data centers, and our advocacy efforts for renewable energy are helping to pave the way for AWS to meet our renewable energy goals for powering the AWS Cloud," said Jerry Hunter, vice president of infrastructure at Amazon Web Services. "We also continue to innovate on programs with our power providers around the world to increase the use of renewable energy at lower costs. Dominion has been, and continues to be, a great partner in this effort."

Paving the way for others

Although AWS becomes the first DVP customer to pioneer this special arrangement, a related, similar proposal to offer market-based rates currently under review at the SCC would allow other qualifying DVP customers with ambitious renewable energy goals to follow suit. This dramatically could change the way that corporations enable large-scale renewable energy projects in Virginia, allowing them to work with their utilities to tailor solutions to the companies’ unique energy needs on the regional grid.

"The proposed market-based rate tariff could provide benefits beyond renewables," according to RMI Senior Associate Anthony Teixeira. "Companies actively managing their load could benefit as their electricity rates would be more closely linked to electricity usage."

Producing energy in the same market in which a company is consuming energy not only reduces market risk, but also reduces emissions in the regional grid in which the company is based.

It’s also a great move for the Commonwealth of Virginia, paving the way for the state to win new data center business and a growing renewable energy industry, something Gov. Terry McAuliffe is pushing for in his commitment to build a new Virginia economy.

In a press release on a recent 80 MW PPA between Community Energy and AWS, McAuliffe stated, "The solar energy industry holds tremendous potential for economic growth in Virginia in the coming years, and I look forward to bringing more projects like this to the Commonwealth."

The BRC and the leading corporations such as Amazon that make up its membership — not to mention the Renewable Energy Buyers Alliance (REBA) partners working in regulated markets with utilities — are driving the corporate renewables market. In an unfolding era of the customer-centric electricity grid — one in which non-utility buyers last year accounted for the majority of new wind capacity in the U.S. — this new deal between Amazon and Dominion is another proof point of changing times and the growing momentum behind corporate renewables.