The world's biggest Internet host announces a deal to soften its 'dirty' reputation. But don't give Greenpeace all the credit.

There’s a not-so-silver lining to all the cloud computing, streaming video and massive data file sharing that make our Internet-based lives so much easier — they consume huge amounts of electricity.

Electricity use by the data farms that power the services of Internet companies is rising 20 percent a year, according to Greenpeace.

“If the Internet were a country, its electricity demand would currently rank sixth,” said Greenpeace senior climate and energy campaigner David Pomerantz in a blog post about the group's annual "Clicking Clean" report.

So it’s important what kind of energy a company’s data farms use to minimize their carbon footprints — as Apple, Facebook and Google have come to decide.

Amazon got a D.

"A massive portion of the Internet would be on the road to becoming greener if Amazon moved to power with renewable energy," Greenpeace said, because of the huge dominance of its subsidiary Amazon Web Services in the cloud computing, web hosting market.

Indeed, market studies by Synergy Research indicate that Amazon Web Services hosts data for so many Web companies that it hosts literally one third the Internet. 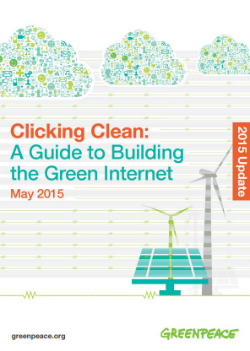 Just as it was being called out for using the dirtiest mix of energy among Internet giants, Amazon Web Services  announced this week a deal to build an 80-megawatt solar farm to power its east coast data centers. It will invest $150 million towards construction of a solar farm in Virginia where the majority of its data centers exist — and where the incumbent utility Dominion Virginia relies on fossil fuels for all but 2 percent of its generation.

It's a significant move to renewables because Virginia is home to 60 percent of Amazon Web Services data centers.

The deal is a power purchase agreement with Community Energy Inc., which will build and operate the solar farm and expects to start generating 170,000 megawatt hours of electricity by the fall of 2016.

That’s not a moment too soon.  Just a week ago, 19 influential customers of Amazon Web Services including Tumblr, Hootsuite and the Huffington Post publicly asked the company to reveal its “energy and carbon footprints and progress toward renewable energy goals,” in a letter delivered to the AWS senior vice president and released to the press.

After Greenpeace gave Amazon a F grade last year for its fossil fuel energy mix and lack of any significant moves towards use of renewable power, Amazon Web Services announced in the fall a commitment to transition in the long term to 100 percent renewable energy. No timetable was given.

Amazon's expansion of data centers in Virginia — where the utility Dominion Virginia has no stated plans to transition away from fossil fuel generation —  cast doubt, Greenpeace and Amazon's letter-writing customers said, on the transparency and sincerity of Amazon’s commitment.

In January, Amazon Web Services announced a wind power purchase agreement for its data center in Benton County, Indiana. A few months later, the company stated that it was 25 percent of the way to its goal of 100 percent renewables powered data centers and made a commitment to reach 40 percent of that goal by fall of next year. That happens to be when the Virginia solar farm is expected to become operational.

But Greenpeace’s Pomerantz somewhat downplayed the Virginia solar farm deal in a tweet, “AWS' #solar PPA is a good sign; still tiny next to their demand in VA, and still waiting on transparency bit.ly/1MIHymF  #clickclean."  He estimated that at 80 megawatts, the solar farm will provide less than half of the energy Amazon’s Virginia data farms consume. Amazon, however, did not provide details on what percentage of its east coast data center power needs would be covered by the solar farm.

To understand the significance of the Amazon's Virginia data centers, consider that Amazon Web Services is estimated to host about 30 percent of the global Internet traffic — making it by far the largest cloud computing host center, according to Synergy Research — and that Virginia is the center for the eastern half of its Amazon's U.S. data operations.  Indeed the company is calling the new Virginia investment the "Amazon Solar Farm US East." 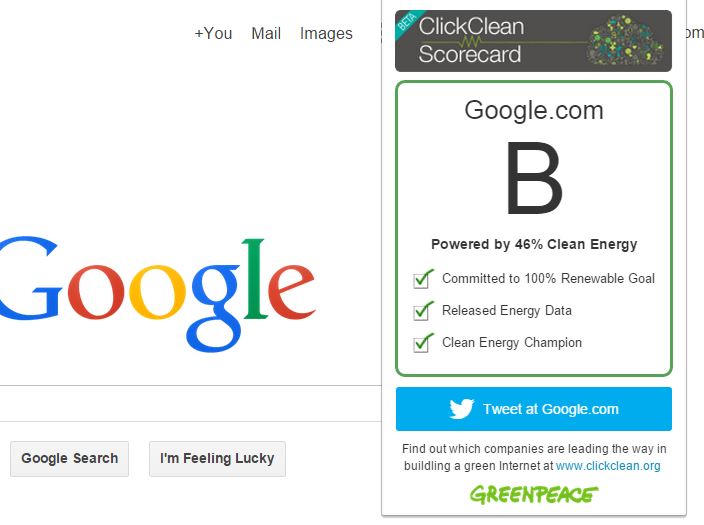 Customers of Amazon Web Services include the U.S. government (and many other national governments), Comcast, Netflix, Dow Jones, Vodafone, Time Inc., as well as manufacturers such as Dole and Novartis.  In the Clicking Green scorecard, AWS customers Netflix, Pinterest, Reddit got poor grades because it relies on Amazon Web Services to host its cloud services.

Part of why Amazon's investment in the 80-megawatt Virginia solar farm may redeem the company, however, is the bad rap of the Virginia utility, Dominion Energy, which Greenpeace calls "Ground Zero for the Dirty Internet."

“Virginia remains the epicenter of data center growth in the U.S.  Loudoun County in Northern Virginia, boasts that up to 70 percent of global Internet traffic passes through its borders on a daily basis.  That amount of data data traffic requires massive mounts of electricity, and most of it is generated by Dominion Resources, a utility that continues to rely almost exclusively on dirty sources of generation, and plans to well into the future," says its 2015 Clicking Green report.

“Dominion’s latest long-term plan that it submitted to regulators shows that it does not indent on making any significant increase in its investment in renewable energy over the next 15 years, and will continue to maintain a high reliance on coal.”

In its "Clicking Clean" report for 2015, Greenpeace praised Apple for its “aggressive pursuit” of a 100 percent renewable by investing in construction of solar and wind plants to power its all its data centers. It got the top grade, a shining A, on the Click Clean Scorecard.

"Clicking Clean" praised Facebook for pressuring its utilities to switch to renewables and for investing in wind and solar purchase power agreements.  And Google, it said, “remains a leader within the sector on the deployment of renewable energy, with a strong combination of procurement, investment and policy advocacy.”

But it noted that Amazon Web Services, if it invested in renewables, could really make a difference in greening the Internet.

"No company could do more to make our favorite sites green than Amazon Web Services. AWS is the dominant player in cloud computing," its 2015 report said, noting that of the 110 Web services studied in "Clicking Clean," 35 relied on Amazon Web Services as their data servers.   But Greenpeace criticized the Virginia operation for getting its power from Dominion Virginia, which generates its electricity mostly from coal and nuclear power, with only 2 percent of its energy coming from renewable sources.

A slew of publicity and social media attention about Greenpeace criticism of Amazon Web Services in recent years — along with the letter from major customers — could have provided a signicant nudge to the company to get moving on its commitment to renewables and invest in the Virginia solar farm.

But investment analyst Megan Birney, director of strategic affairs for Wiser Capital, an investment firm that specializes in solar and sustainable energy, said it may not be the shaming that is driving Amazon to this investment in solar farms but rather sound economic advantage.

“Even if there’s pressure (from customers and investors) there still needs to be an economic reason for them to make the investments in renewables,” Birney said, and she thinks it is to mitigate risk on future electricity costs and supplies

“We are starting to see a shift,” of large companies investing substantial sums in renewables. “Companies are looking for cost certainty and looking to mitigate risk. We think that is actually what is driving this.”