The flat, sprawling expanse that once served as Silicon Valley's federal airfield — a facility now home to Google's aerospace and robotics research — provided a fitting backdrop this week for a meeting of the aviation and high tech sectors.

In a far-flung corner of the guarded campus at Moffett Field, past the retro military commissary and other relics from the heyday of government-powered space exploration, a series of white tents have been arranged behind a high barbed wire fence.

Despite the decidedly low-tech ambiance, the meeting convened by NASA and the somewhat Orwellian "Association for Unmanned Vehicle Systems International" had a decidedly high-tech focus: charting a more coherent path forward on the deployment of drone technology.

“This is really a call to action,” said Gur Kimchi, vice president and co-founder of Amazon's much-discussed Prime Air drone delivery effort. “We need to come together as an industry.”

Fragmented examples of the commercial, military and research applications for drone technology, formally referred to as Autonomous Unmanned Vehicles (UAVs), range from surveillance to precision agriculture.

Kimchi’s own company, Amazon, has a stated goal of delivering goods directly from manufacturers to consumers' doorsteps. And drones are perhaps most famous for their association with unmanned military aircrafts that have gained infamy during the war on terror.

In virtually any context, the primary value proposition of drones is efficiency — removing human drivers from the transportation of everything from random gadgets that consumers order online to bombs destined for overseas targets.

These prospects are ethically fraught with questions like what happens when civilians are harmed by drones and their cargo, or where all the laborers who currently deliver goods for a living will find employment. Beyond the dystopian connotations, the technology also comes with potential upsides beyond cost-cutting efficiency.

Drones tend to be rechargeable and electric, making them an environmentally-appealing alternative to diesel-powered trucks, planes and trains that haul goods around today. 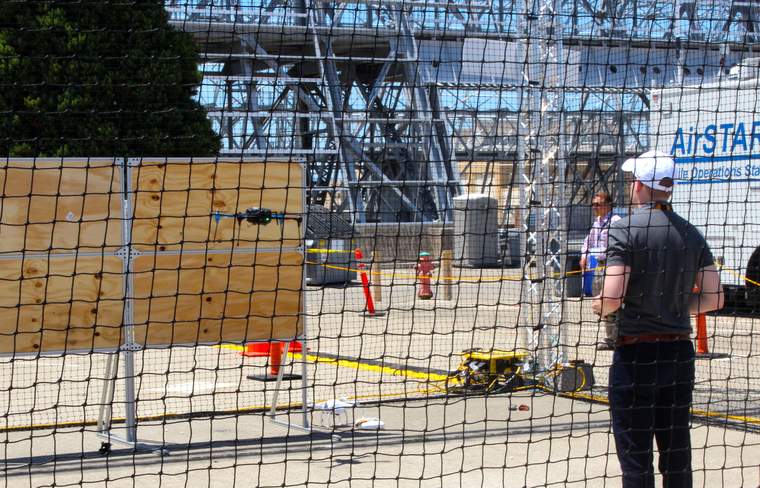 </p><p></p><p></p><p></p><p></p><p></p><p>A drone demonstrated Tuesday at the Unmanned Aerial Systems Traffic Management Convention (UTM) 2015.<strong> </strong></p>
The problem, however, is the drone industry's current state of logistical chaos. Operators don't have to be registered, leading to run-ins like the one earlier this month where firefighters attempting to control a blaze in Southern California had to work around hobbyist drones being recklessly flown in the area.

That incident underscored a broader lack of a centralized air traffic control systems to track flight routes, ensure adherence to no-fly zones (like airports) and reduce the likelihood of accidents.

“It’s about adding that layer on top — that cloud infrastructure," said Nick Pilkington, co-founder of the upstart DroneDeploy, which is pursuing the budding market for drone logistics management.

Beyond encouraging businesses to jockey for advantages in the nascent drone market, the lack of regulatory clarity raises big questions related to law enforcement and public access to airspace.

Who will be allowed to fly drones, and for what purposes? Who will police the vehicles, and how might the court system weigh in on legal liability and privacy issues? When it comes to economic opportunities, will businesses be given their own enterprise section of air space for unobstructed use?

Perhaps most important: Would an orderly system for flying drones really improve transportation systems as we know them?

That all depends on whether conflicting worlds can get along.

"We have the innovation of the IT community meeting the conservative, safe culture of aviation," said Andrew Lacher, UAS integration lead and senior principal of the nonprofit federal research organization the Mitre Corporation. "We’re seeing, quite frankly, a bit of friction."

When it corporations tapping into drone technology, none have been as publicly aggressive as Amazon.

At the event on Tuesday, Kimchi detailed how the notoriously cost-conscious company hopes to realize more efficient delivery options. Specifically, the e-commerce giant would like to see airspace sliced and diced to facilitate commerce.

“We believe a segregated space below 500 feet is the way to go,” he said, flipping to a slide showing a proposed high-speed transit corridor between altitudes of 400-500 feet.

Below that would be a space designated for slower-moving local traffic — though just how far above private property drones would have to fly to avoid trespassing remains a legally gray area. 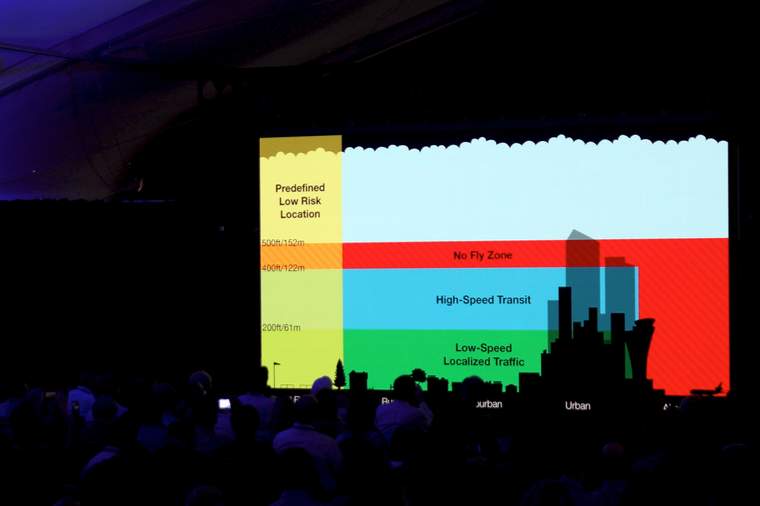 Such a system would likely pave the way for Amazon and other businesses with big R&D budgets to develop high-speed drones with minimal interference from commoners relegated to lower altitude.

That's exactly the point, according to Kimchi. He said the company espouses a view that those with more sophisticated equipment and command capabilities should have more sway.

Amazon aside, a range of other companies looking to carve out a niche in the budding drone industry.

Since there is currently no centralized regulator or utility for drones, it remains difficult to account for the potential of unsuspected objects. Applications modeled after the Google-owned traffic mapping app Waze could help, but a truly comprehensive system would likely require a more standardized approach to certification and flight clearances.

In the meantime, DroneDeploy is one of several providers, along with Altitude Angel (tagline: "the Internet of flying things"), vying for position in the fields of drone data collection and vehicle-to-vehicle communication.

An executive from drone manufacturer 3DRobotics also stressed the need for public education about safe flight practices. He highlighted open source online initiatives that seek to aggregate information about who is flying drones when, as well as why they're flying them.

“There has to be a database... shared by all command and control centers," Kimchi said. “The airspace is only as safe as everybody in it."

mazon is eyeing long-term financial benefits with its drone delivery play, but the issues associated with drones are no longer theoretical for Alameda County, California, Sheriff's Captain Thomas Madigan.

“We’re really living through this right now," he said, referencing backlash to the county's decision to purchase two drones for civil use at the end of 2014.

Recounting anxiety about "predator-style military drones in the United States," Madigan said that the vehicles were primarily purchased to assist in search and rescue operations.

"We believe that there is tremendous value for using unmanned aircraft for limited public safety missions," he said, calling drones, "a cost-effective way of enhancing public safety."

Still, Madigan conceded that drones do come with unique anxiety about surveillance and civil liberties; "It dovetails into the militarization of police," he said.

One particularly thorny issue is the possibility of "cross-purposing of data," or using information collected with the help of drones for a specific operation to launch other investigations, such as an incidental discovery of a drug operation or suppression of political dissent.

As is the case with self-driving cars and other robotic technology, Lacher added that drones must also be able to withstand hacks or other remote threats.

"We also have to think about something called cyber resilience," he said, "including deliberate attacks."

The right to fly

While decades-long product cycles have long been the norm in aviation, one crucial distinction with drones is that the underlying technology is already moving faster than the relevant laws.

“For better or worse, there is now a civil and commercial UAS (unmanned) segment of aviation," said Bill English, the National Transportation Safety Board's investigator in charge. "The universe is changing.”

While the FAA, NASA and a widening spectrum of private sector operators in the drone industry sort out potential certifications and regulatory requirements, several issues are already emerging as key sticking points.

FIrst: how far off the ground should drones be flying, particularly over private property or in urban locations?

"The law needs to determine to what extent landowners have airspace rights," said Diana Cooper, an attorney with the Canadian firm LaBarge Weinstein LLP.

Decisions down the road could have a big impact on drone congestion, also influencing the burden that the influx of vehicles could place on rural and urban ecosystems.

Cooper added that liability for accidents with autonomous operators is another gray area that, in the short term, appears to place the onus on a drone "operator, as opposed to the manufacturer" – a precedent consistent with how the driver of a car can be held responsible if an accident occurs while in cruise control mode. 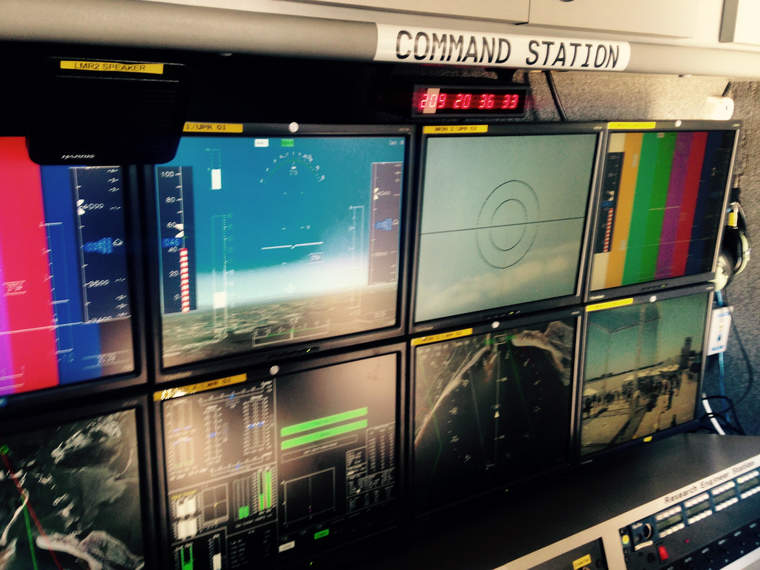 </p><p></p><p>A glimpse inside NASA's mobile drone research lab.</p>
To begin to project the types of hazardous scenarios drones might encounter — and what should happen in those situations — NASA has already commissioned a mobile engineering unit focused on safety.

The group based in Langely, Virgina (home of the CIA) is in the early stages of a five-year program to develop a range of research that will be available to both government and private sector operators.

Though the specifics of lacking safety measures can quickly delve deep into the weeds, those well-versed in the aviation industry contend that it's only a matter of time until the questions surrounding drones become more tangible for a wider audience.

“I say when, not if," English said. "Eventually, there will probably be some sort of major UAS accident."

Drone use takes off in agriculture

Could drones give your package a sustainable lift?