Chances are you don't prioritize your holiday wish list based on the chemical composition of the products on it. But informed shoppers are increasingly scrutinizing the items they're bringing into their homes with an eye to whether they include chemicals harmful to human health.

That's inspiring more retailers to make meaningful changes to their chemical disclosure and elimination policies, according to a new industry report card released ahead of Black Friday.

The analysis was prepared by Mind the Store, a national campaign launched in 2013 to promote retailer chemical transparency. It evaluates companies based on their policies for flame retardants, carcinogens and endocrine disruptors in consumer products. This year's edition scores 30 major retailers, compared to 11 retailers in its inaugural report. 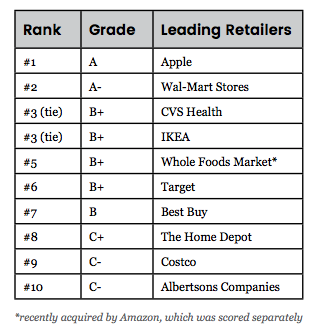 First, the good news: Seven out of the 11 retailers evaluated in both 2017 and 2016 made significant improvements in their chemicals policies, moving their average grade from a D+ to a C. This shift was driven by corporate action from companies such as Best Buy, Costco, CVS Health, the Home Depot, Target and Walmart Stores, which all released safer chemicals initiatives this year.

The companies were scored out of 135 points, based on publicly available information and data that they released to Mind the Store about progress on chemicals management oversight, supplier accountability, chemicals disclosure, safer alternatives policies and other criteria.

Ahead of the bell curve

No company received an A grade in 2016 (PDF), while in 2017, two companies received all-star ratings: Apple (A) and Walmart Stores (A-), followed by CVS Health, IKEA, Whole Foods Market and Target, which earned B+ grades. Walmart Stores' score dropped slightly from first to second place.

Apple leads the consumer electronics industry in chemicals safety, having phased out brominated flame retardants and polyvinyl chloride in 2009.

Costco and Albertson's supermarkets progressed the most year-over-year, jumping from failing grades to C grades from 2016 to 2017. Last year, consumers delivered 125,000 signatures to Albertson's headquarters, pressuring it to set restrictions on BPA in packaging products and develop a chemicals policy. Costco announced a new chemicals management policy in October.

Also this year, P&G, SC Johnson and other corporations supported a California law demanding transparency in commercial and household cleaning products. Home Depot strengthened its chemicals policy across five product categories. Walmart is working with the Environmental Defense Fund to reduce its chemicals footprint by 10 percent by 2022.

Responding to consumer demands in "era of hyper-transparency," Target will publicize the chemical footprint of the products on its shelves by 2020. And in April, pharmacy chain CVS Health announced the removal of parabens, phthalates and formaldehyde donors in about 600 body products, promising to stop shipping store brands that don't meet these standards to distribution centers by 2019.

Retailers see the value of getting ahead of the curve on enacting rules ahead of state or governments.

"We think these improvements show that retailers respond to consumer concerns and scientific evidence," said Mike Schade, director of the Mind the Store campaign. "Retailers see the value of getting ahead of the curve on enacting rules ahead of state or governments."

According to Schade, while the federal government is decreasing oversight of corporate chemicals management, states are leading the way. Over the past year, 24 states introduced 106 policies to protect the public from toxic chemicals, according to Safer States.

"States are stepping up to the plate to fill major gaps in chemical management at the federal level," Schade said. "Retailers are working to get ahead of the regulatory curve by adopting robust safer chemicals policies. This is more critical than ever as the Trump EPA is turning back the clock on public health."

Two retailers that received D grades in 2017 have a slightly more hopeful story behind their ratings. Amazon, which recently acquired Whole Foods, improved from its F grade in 2016 (it received the worst possible rating of the 11 companies in the inaugural report).

While the online retailer publicly has not declared safer chemicals policy, the company disclosed to Mind the Store that it is in the process of developing and evaluating a program. An Amazon representative declined to comment on the details but said more information may be available in early 2018.

Over the past year, Amazon introduced a private label laundry detergent products certified by EPA Safer Choice, which restricts chemicals such as phthalates. It's also in the process of making its Elements brand transparency sourcing and third-party certification process available to all companies. It has yet to set a clear timeline for reducing or eliminating toxics, to clarify for customers which products meet third-party safer chemical certifications or disclose the presence of toxics through the Chemical Footprint Project.

"The Whole Foods acquisition is a real opportunity for Amazon to see the [grocery store's] approach to chemicals" in beauty and personal care products, Schade said.

States are stepping up to the plate to fill major gaps in chemical management at the federal level.

Walgreens also received a D grade this year, finally announcing plans to publicize a chemicals sustainability policy and a restricted substance list in 2018 after faltering on the initiative since 2014. The delay was influenced by its merger with Boots and the formation of the Walgreens Boots Alliance, reported Mind the Store.

Boots has eliminated chemicals of high concern in its U.K. and European products, a policy Schade hopes may filter into its parent company's commitment to "cleaner" products.

Now for the bad news: Most retailers ranked by the report card are failing on chemicals transparency (the average grade for all 30 companies was a D+).

Some consumer goods experts, such as Safer Made, believe that chemistry startups and incumbents will help big companies scale safer alternatives to toxic chemicals.

Seventy percent of large retailers lag on progress, earning Ds and Fs for failing to publicly announce safer chemical policies to ensure the safety of their products and supply chain. Among the companies that received F grades are Toys "R" Us and Babies "R" Us, which sell children's toys and goods, along with Ace Hardware, Kohl's, Office Depot and Trader Joe's.